CAD software for anyone, anywhere, anytime | LEARN ABOUT AUTOCAD

Redrafting and remodeling with AutoCAD

John Morgan, a graduate of the Southwestern Baptist Theological Seminary (SWBTS) and the school's only architectural drafter, is a devout AutoCAD user. For his most ambitious project yet, he used AutoCAD and the AutoCAD mobile app for remodeling SWBTS's Cowden Hall.

A life of ministry, design, and AutoCAD

In describing his childhood, John Morgan, active church member and the architectural and engineering services drafter at Southwestern Baptist Theological Seminary (SWBTS), reveals how growing up with religious faith had as much of an impact on his future as growing up without toys.

"I would watch a TV show or a movie, and I would see something that I liked, and in my head I would break it apart into simple geometric shapes, lay those shapes out flat, draw them on the cardboard, cut it out, and build my own toy," Morgan says.

With a passion for drawing and design, Morgan double-majored in mathematics and industrial technology at Southeastern Louisiana University, where he was introduced to AutoCAD. After graduating in 1995, Morgan enrolled in the New Orleans Baptist Theological Seminary to become a pastor. Morgan, as he says, "ended up" at the SWBTS Fort Worth location eight years later putting his undergraduate studies to use working part-time as a drafter at SWBTS's facilities maintenance department.

Today, Morgan's responsibilities as the school's architectural and engineering services drafter span across SWBTS's entire campus. "From HVAC to electrical to building design, whenever we make a change or remodel, I'll be the one that draws it up," he explains.

He is also responsible for maintaining the drawings and the records of more than 22 buildings, including the school's 38,800 square foot music building, Cowden Hall.

"It has had several remodels over the years, so it wasn't exactly that old looking on the inside, but we have been trying to bring it up to modern times and include new technology," Morgan says. 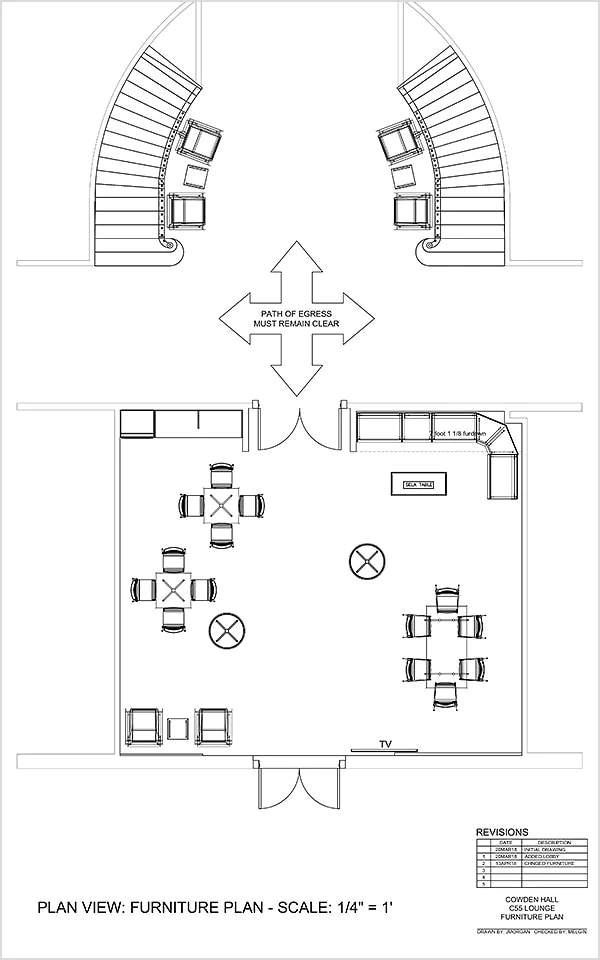 Drawing and designing with the help of the phone

As the home of SWBTS's School of Church Music, Cowden Hall serves nearly a third of the student body, but hadn't scaled with the size of the program's growth. Morgan was tasked with upgrading the capacity of its electrical and sound systems as well as bringing the building up to code. Originally built in 1926, Cowden Hall's architectural drawings also needed an update.

"At some point, prior to me, whoever drew them up in CAD just said, 'close enough is good enough,'" Morgan explains.

Morgan started using the AutoCAD mobile app as soon as it became available more than two years ago. "It was very easy to adapt to, very simple, and something I had been wanting for ages–essentially, AutoCAD on touch screen," he recalls. For the Cowden Hall remodel, he relied on it heavily. He collected field measurements using the AutoCAD mobile app and a laser distance measurer.

"To take the type of data that I can get with the mobile app used to take two to three days of work, having to go back and forth," Morgan says. "Sometimes it would take two guys–someone to hold the tape down on one end of the room and another to make sure it was in the right place. But with the laser and mobile app, I can get through a room in less than half an hour, with the same detail that used to take several days." 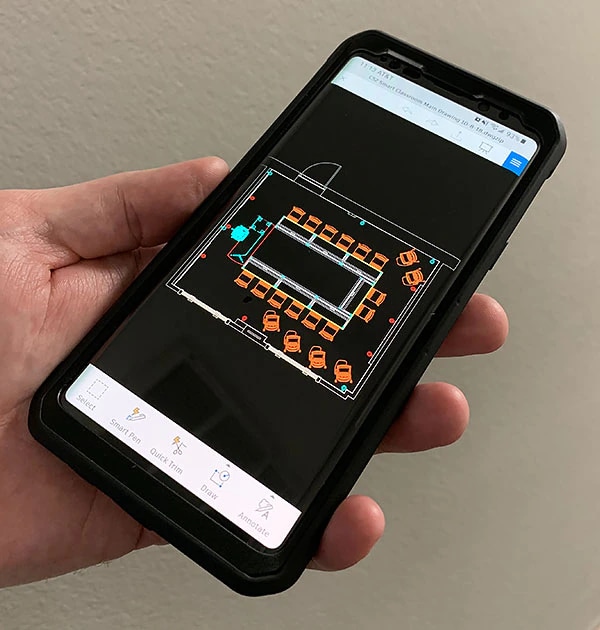 Drawings from the AutoCAD mobile app easily sync to AutoCAD and the AutoCAD web app on John's computer. "I'll just open it up in AutoCAD and start drawing," he says. "Or sometimes, I'll open the file up using the Architecture toolset, and insert the doors, windows, and finish out the room doing the views and anything we need to do for remodel."

On the ground floor is the so-called "smart classroom," designed for technology-based learning where more of the plan's decisions were made by all the stakeholders. 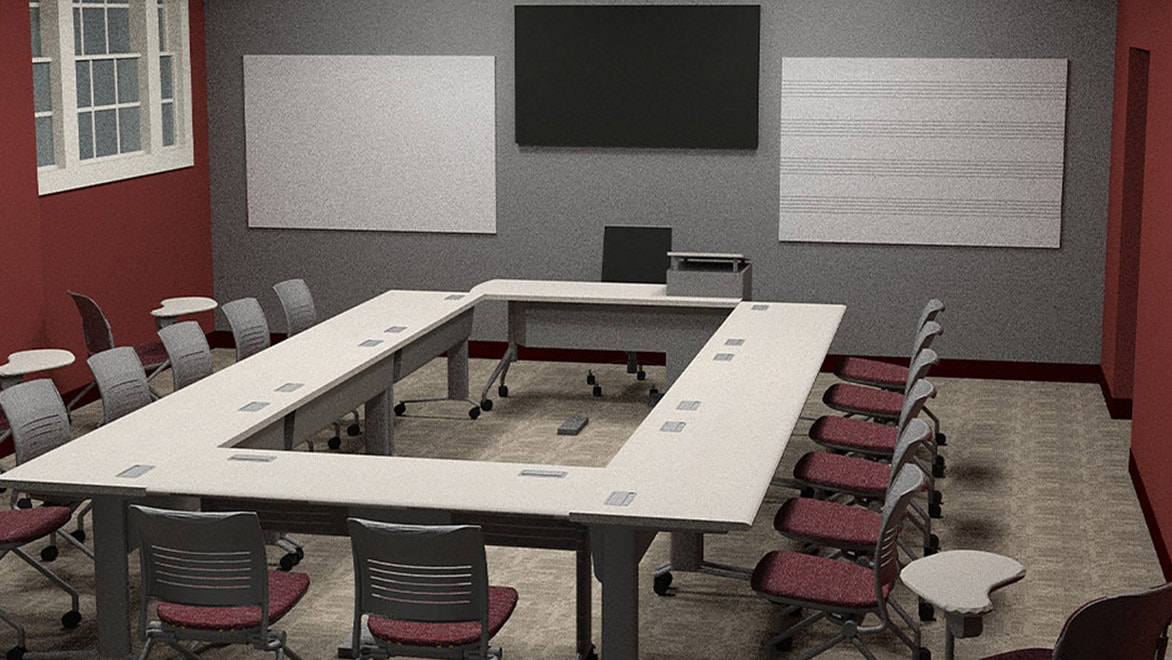 "At a meeting, I just pulled the drawing up on my phone and made notations–including changes to the furniture–and deleted unwanted things as they were being discussed," Morgan says. "The dean of the music school was in awe of the fact that I was using CAD on my phone." 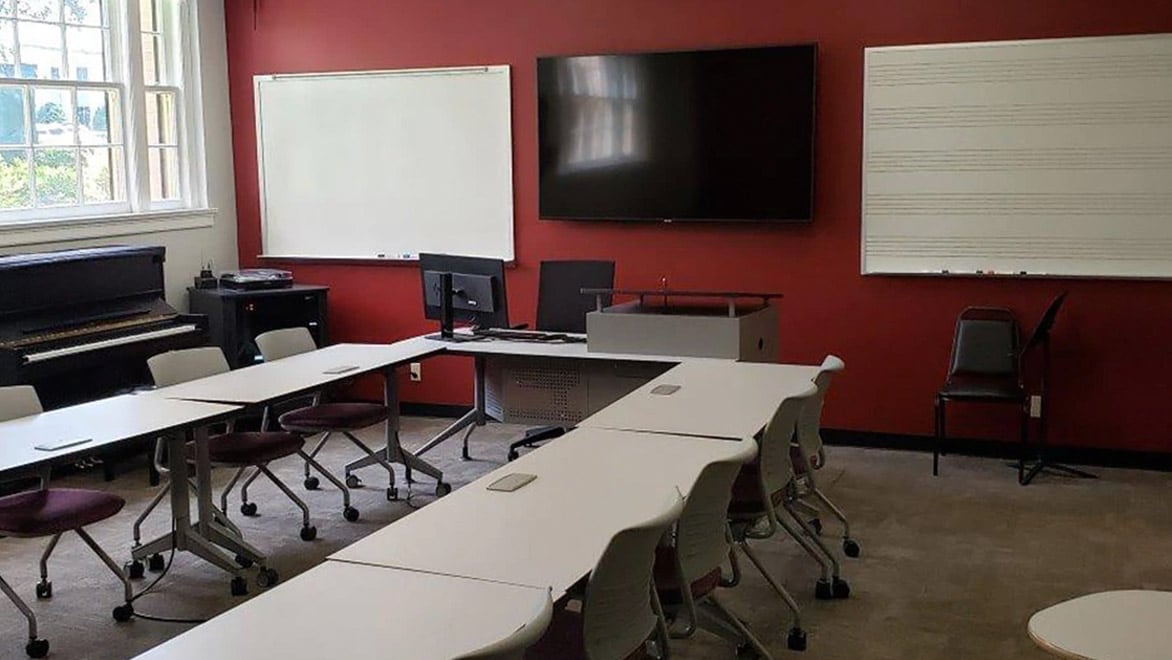 “With everything AutoCAD can do, plus using the AutoCAD mobile app, I've been able to do the work of two people.”

Before any designs were complete, Morgan used AutoCAD to present renderings for approval from the administration as well as the donors who made the remodel possible in the first place.

"I don't need several programs to render my drawings," he says. "Any change I make is automatically put into any of the subsequent drawings on my layouts, so I don't have to go back and redo it in some other program."

Having the detailed visualization for review is especially helpful considering that Morgan worked without an interior designer. 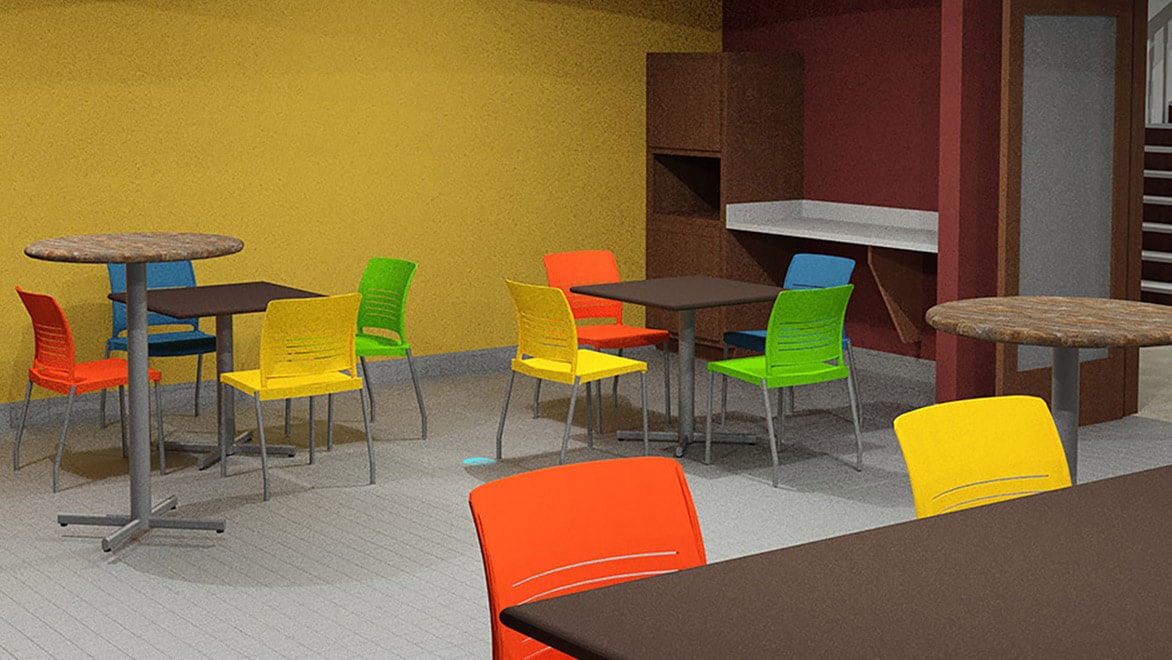 "The dean wanted the break room to be colorful with a yellowish gold accent," he says. "When I rendered the room, he chose the shade. I could control the RBG material settings within the drawing and, in his words, 'It looked like Big Bird had splatted on the wall.' So the rendering really helped out there. It saved us a lot of time and the cost of painting a color that wouldn’t have worked."

As someone who's been using AutoCAD for more than twenty years, Morgan is quick to name his single most favorite feature. "It's the flexibility. I can draw the same thing using different techniques, without being limited to doing it just one way." Thanks to the speed, ease, and flexibility of AutoCAD, the remodel of Cowden Hall was completed in just under a year.