What Is a Document Management System and Why Is It Important?

Any construction project, or any project for that matter, relies on easy and organized access to information, a hassle-free way to quickly and confidently understand where to find the sought- after document that will answer the most preoccupying of questions: what do am I doing here, exactly?

Quickly searching for a definition online, we found that Wikipedia explains document management as so:

This explanation unearths several key concepts to implementing a successful system at a project or even company level:

I would add a few more:

Let’s dive into how these concepts drive an actual product selection and its implementation on a large construction project in the San Francisco Bay Area.

A Project Example: The Joan and Sanford I. Weill Neurosciences Building

This new 270,000-square-foot building will bring together psychiatry bench lab research with other neurosciences research, clinical and support spaces, to drive advances aimed at new treatments for disorders of the brain and nervous system. This ground-up project (B23A) is being delivered using Lean Integrated Project Delivery processes, as well as team co-location in a big-room environment.

The neuroscience complex at UCSF Mission Bay in San Francisco will become one of the largest in the world.

The main companies that form the IDT are:

The team also includes a multitude of design and trade partners, about 20 companies, co-located on-site in the project’s big room:

The IDT was brought on early, before SD documentation was complete back in 2016. This gave the team the opportunity to tailor best practice workflows to best suit the technical particularities of the project:

One of the main processes the team decided to dive into is, you’ve guessed it, the document management system. In my opinion, this is one of the most critical processes to get right, especially on a very technical, highly collaborative project such as this one.

A few disclaimers before we start:

Drawing on past experiences, the workshop team was asked to share experiences of good and poor document control practices. The following lists were the result of this discussion.

The workshop participants then documented what their ideal future state would look like. A prioritized list of those characteristics follows:

The team them prioritized these desired states by order of importance and ranked them from least to most difficult to achieve. This exercise located each business function into one of three zones:

Settling on a Solution

Once the criteria for what the team was looking for in a document management system, workshop attendees decided to evaluate how these business functions could be addressed using four potential software solutions:

Although many more solutions were available, these were arbitrarily chosen based on the team’s previous experience in order to limit the learning curve. This was the team’s preference ranking:

*Please note this is how the team felt about the software and how confident they knew they were at their current level of expertise. This does not reflect on the actual capabilities of a given software.

**Business functions that ranked evenly across all solutions were not represented.

At the end of the workshop, the team evaluated current software offerings and decided to implement BIM 360 Docs, mostly due to its integration with Revit, its granular permission control that also affected tools such as BIM 360 Glue or Field which were already planned for use, and the potential for future developments promised by Autodesk, notably regarding mobile accessibility.

The setup portion of the platform focused on three key steps:

As a full-time VDC manager on the project and the most passionate about integrating the Document Management process with the VDC process, I took on the responsibility of setting up and administrating the platform. This gave me the flexibility, at the project level, to respond to minor tweaks in the setup as the project progressed while ensuring the integrity and accuracy of the content as it related to the model-based coordination effort happening in parallel.

The only other project administrators of the platform at the time included DPR team members in charge of slip-sheeting documents.

On of the key features that appealed to me what the level of granularity that the platform offered in terms of access and permission management. The ability to provide access to a specific folder either by role or by company allowed me to very precisely monitor who had access to what.

Based on previous experience, the following roles were selected:

The ability to add multiple roles per company came in handy. It was useful to give SmithGroup access to all documents their consultants had as well as giving them elevated rights to certain folders to support their design management responsibilities.

The field-related roles were left to be defined later one once construction activities were about to start the following year.

BIM 360 Docs is by default organized in Plans and Project Files.The Plans folder automatically extracts individual sheets from multi-page documents. Here is the layout of this folder for the project as it now stands:

The Project File’s folder is organized as such:

Some of the limitations of the software drove the team to break down the Record Set folder into multiple subfolders due to:

The Record set folder is populated using the multipage drawing sets uploaded to the Document Packages in the Project files folder. This was intentionally set up to use only what was officially transmitted instead of the live Revit model saved on BIM 360 Teams.

The Progress Set folder was created to house a weekly update to floor plans and RCPs as well as certain noteworthy elevation sheets that were to be used on a regular basis – the team felt the need to always be able to have access to the latest and greatest iteration of the current design somewhere other that on BIM 360 teams in model format.

As is already apparent, even the best setup in the world is only as good as the first time it needs to change... which we discovered as we started using the platform.

I mentioned previously some modifications were made to the folder structure to better adapt to the workings of the project team and although this is possible from a technical standpoint it requires, as just about anything rolled out in a production environment, discipline.

Inherited permission levels for subfolders meant several other new “root” folders needed to be created along with two new roles:

Having one place, and one place only, to go to review drawings, specifications, or closed RFIs helped build the confidence required to have all the field and inspection personnel involved. The platform is successfully being used as the single source of truth and is also now serving as an active platform to bring up and answer design questions through the Issues module.

Although this was not initially scoped out in the setup of the platform, the system currently counts over 160,000 issues that were raised and most of time answered as part of the design process and avoided the creation of an RFI, which would have required additional administrative steps to process. In order to manage those efficiently, some strict rules regarding the description and location data were developed to help organize the increasing number tags and pins managed by various team members. 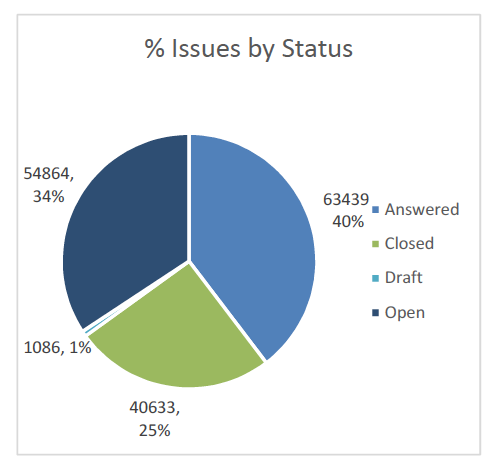 See example of issues being used on sheet below.

Along the same lines on the administration side, some additional feature were put to use to help the searching and filtering of the ever-growing content the end users were having to deal with:

All things considered, using BIM 360 Docs as a document management system adequately answered the main key features requested during the workshop while the initial setup provided enough flexibility to accommodate minor requests and process changes down the line.

Scoping out requested features in advance helped gain buy-in from the team upfront, which helped alleviate frustrations as team members stretched the platform to the limits. Although the team is looking forward to future developments, notably in terms of mobile applications, the system provides a level of trust and an ease of access that, coupled with the minimal effort required for maintenance, does meet the expectations set at the start along with new opportunities for design collaboration.

Usage by the Numbers

Jean Goyat is the VDC manager for the Bay Area at DPR Construction, with an interest in creating and overseeing the implementation of best practices that support the virtual design and construction (VDC) process. Currently managing the model-based coordination approach on a complex research lab project in San Francisco, his expertise focuses around megaprojects and the inherent challenges they entail specifically around communication and data management. Having been immersed in several projects over $700 million in the Bay Area, Jean takes advantage of his proficiency with technology to optimize VDC practices.

Mitch Cornelius is a business consultant with Autodesk and has been engaged with construction companies across the US in this role since early 2016. Mitch has a passion for improving outcomes for construction companies through refining business process. Mitch has been involved in the construction industry since 2004 with a focus on application of technology to construction processes. He has worked on projects that range from very small to very large, but on every project his focus is to improve business outcome through process refinement and application of technology.