In architecture, technology and computers provide ways for us to produce and share design documentation. Until now, the profession has divided our work processes into a discovery phase with hand sketching and a production phase where the sketches are developed into computer-aided illustrations. Architectural design is currently experiencing a shift wherein there is an integration of hand sketching and technology into a single process. This article will demonstrate the ways in which computers can help us sketch and iterate our ideas, and how we can redefine sketching to include all drawing, direct modeling, and computational studies.

“When I say artist I mean the man who is building things — creating molding the earth — whether it be the plains of the west — or the iron ore of Penn. It’s all a big game of construction — some with a brush — some with a shovel — some choose a pen.” –Jackson Pollock

Each design starts with an idea. The idea is given life through a sketch and from that sketch the river of ideas flows forth. For some reason, our profession has drawn a line of what a “sketch” is. Somehow a “sketch” is this magic drawing that flows from hand through pencil to paper. This sketch has to happen outside and separate from the technology (computers). Consider how often has it been heard in the office, “To design…take it out of the ’box’…one can’t think in a computer!” In that context, then, a statement by Norman Foster:

“The pencil and computer are, if left to their own devices, equally dumb and only as good as the person driving them.” — Norman Foster

There is an idea ingrained deep in the design profession that using a computer early in the design process is predefining the designed outcome. However, this is not a relationship of computer or pencil. The tools we use in our process, whether pencil or AutoCAD, clay or Maya, foam or SketchUp, paper or Revit, crayon or Rhino…directly define what is created. But this is not to be seen as negative, it is just to be.

Put another way, there is nothing in the history of humankind that has been created that was not influenced by the tools chosen to create it and that which has come before. Regardless of the tool we choose, to begin our design process, the design is driven and steered by the mind behind the process.

“To create, one must first question everything.” — Eileen Gray

So today there is a question. To question the idea of a sketch, of the process of sketching. Question the idea that one must design and sketch free of the computer and modern technology.

What Is a Sketch?

What are the tools of traditional sketching?

Consider that there is nothing inherent in the definition of sketching that requires one to use these assumed tools. Yes, these tools work to sketch, but sketching is not limited to these tools. Sketching is defined by character beyond the media in which it is created. The sketches created during the creative process are about the hand and mind from which it is defined. The media is an individual preference to the process of illustrating an idea of the mind.

“Laughter is timeless. Imagination has no age. And dreams are forever.” — Walter “Walt” Disney

In the animation studios of Walt Disney, the creative teams must both, and simultaneously, see the outcome through their own minds while simultaneously working through the viewpoints of colleagues. In the mind differently, as with process and tools, each has a different view and focus. When these differing views work together, great works of history are created.

Today the tool set for sketching is to be redefined, the tool set expanded. Today’s hardware and software give the ability to work as freely in data and model environments as pen to paper. The tool set of the sketch process today includes modeling, programing languages, data analysis, CAD, and beyond.

The value of sketches created today through new media/mediums are of no less value to the creative/design process. One may even argue that the creative/design process, with today’s advanced tools, allows a greater exploration of the human’s creative mind. It may push further ideas, and begin to create through workflows that do not become limited by the capabilities of the tools utilized in process. A sketch workflow can integrate tools of all types.

The sketch workflow is an integrated and interoperable workflow including both direct model/illustration tools in partner with data/analysis tools.

What does a modern designer’s tool set include?

The tool set of today includes tablets and PCs, styli and keyboard, and applications such as Sketchbook Pro, FormIt 360, Dynamo, and Revit.

What are the tools of sketching today?

The hardware of sketching used to require a few simple tools. A scrap of parchment, paper, napkin, notebook. It required a marking instrument — a pen, marker, brush. These tools at the time of their creation were the peak of technology; they allowed flexibility in idea and location. Today, hardware for sketching is expanding to the tablet, laptop, touchscreen, and scanner. These tools provide greater flexibility and mobility than hardware of yesterday.

The sketch process is unique to all. Regardless, consider your tools — how do they support or degrade the creation process. At its basic level it needs to allow and support: 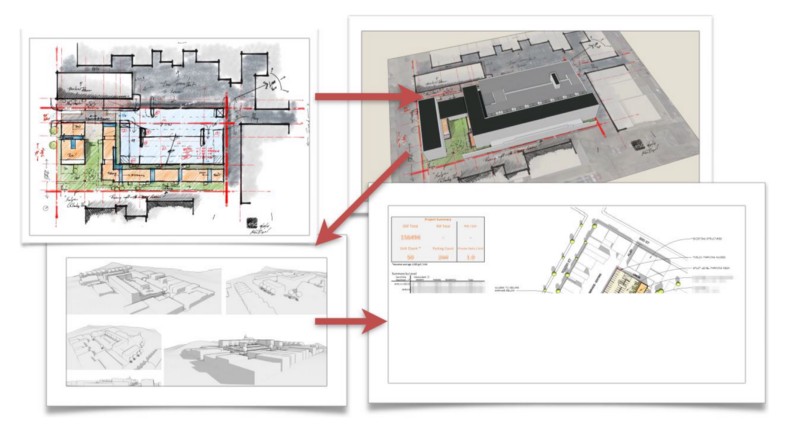 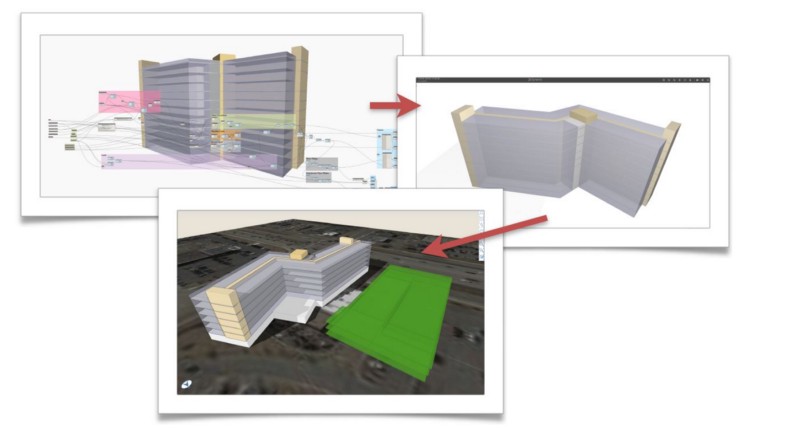 Set 3 — Sketching from Tablet to FormIt 360 through Revit to BIM
Building Massing Sketch to Revit
Applications: FormIt 360/Dynamo and Revit

Mike Engel, Associate AIA, is a designer with ESG Architects in Minneapolis, Minnesota, with a particular focus on formulating and developing integration between the design and production teams.

In architecture, technology and computers provide ways for us to produce and share design documentation. Until now, the profession has divided our work processes into a discovery phase with hand sketching and a production phase where the sketches are developed into computer-aided illustrations. Architectural design is currently experiencing a shift wherein there is an integration of hand sketching and technology into a single process. This course will demonstrate the ways in which computers can...