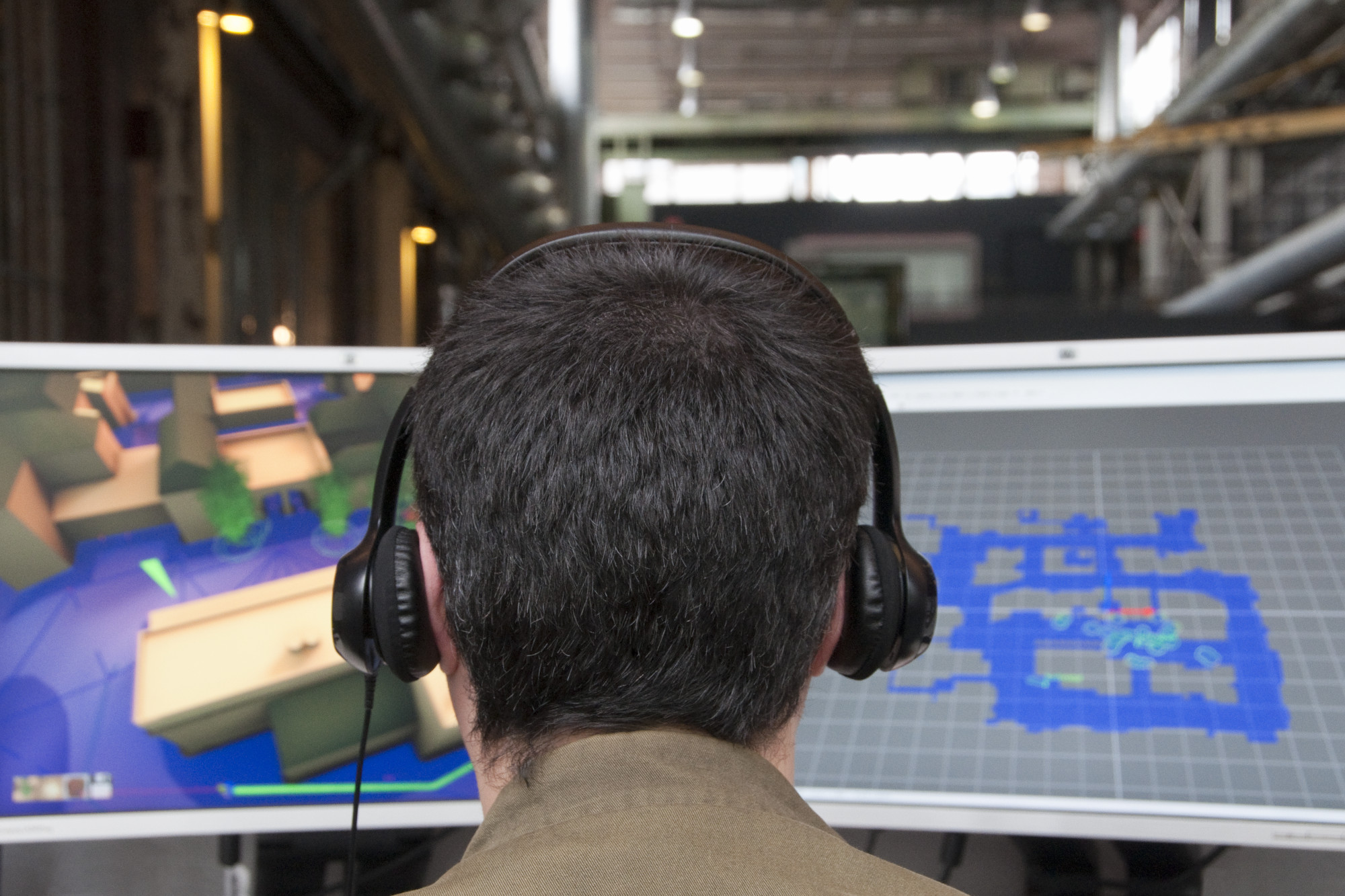 Game engines are known for their innovative graphics and physics. That would make it seem like game engines are only beneficial to architects. This is just not the case. Game engines provide a wide range of benefits to engineering firms, and this article will explain how to get started using them in a way that is easy, fun, and affordable. Game engines could be used to help QA/QC a project, or to help visualize engineering analysis 3D models, or for real-time interactivity using virtual reality (VR), or even as an interactive game that shows construction sequencing animations, and much, much more. The possibilities are endless. Game engines are fun to use, so it’s time to use them in your engineering firm.

Up until a few years ago, the workflow for putting a Revit model into a game engine was not quite as simple as hitting an Export button. Although it did technically involve using an export, there was much more manual work to be done, and often required the use of multiple software platforms to get the desired results.

Today’s workflows are much simpler thanks to applications that allow you to go directly from Revit into a game engine environment where materials and object data are translated and applied during the export.

Game engines are very cheap, or free with some restrictions, especially since the demands placed on the game engine software in AEC are not that great compared to the gaming industry. In most cases, computers that are configured to work with Revit are enough hardware to use with game engines.

Game Engines Are Not Just for Architectural Visualization Anymore

Much like the initial appeal of BIM was 3D geometry, the initial appeal of utilizing a gaming environment was to easily look at a 3D-rendered environment. This is especially true in the marketing of projects. Being able to show clients how pretty their new lobby will be, or how much of the atrium is visible from the CEO’s office in a 3D, immersive manner goes a long way.

But this doesn’t have to only apply to the artistic aspects of a building. It can be useful to visualize structure and MEP systems in such an environment as well.

Whether it be for construction coordination or facilities maintenance purposes, understanding how the systems will be installed is of high value. Putting a model into a gaming environment makes it easier to navigate and experience the model than trying to do so in the authoring software, or with printed documents.

You may ask, “How does this have any marketing appeal?” The answer lies in efficiency. Virtual mock-ups of systems can be huge time savers, giving the client the opportunity to recognize potential issues or alternatives before any actual construction begins.

A virtual mock-up offers not only time savings, but also material savings. In a short amount of time, one person at a desk can put together a mock-up that might take several workers multiple days to complete. Changes can be easily and quickly applied and seen, without having to waste materials.

Visualizing systems also reveals prefabrication opportunities, which can result in better safety and expedited construction of key building components. Also, using game engines is extremely fun. If you are still not convinced after the course and reading through this article that game engines do not apply to your engineering practice, then please show other engineers who will use it. This could include engineers outside of your company. I am sure there is no shortage of AEC professionals who would enjoy learning about game engines for engineers.

Presentations and Telling Your Story

Game engines could significantly reduce the amount of time spent rendering still images of projects. For example, the image below took 30 seconds to render because the model was already inside a game engine and since game engines render in real time, it was only a matter of taking a screenshot of the view I wanted to create. This image was used in a magazine article that is referenced in the image.

Forget presentations and wowing everyone in the office. These tools are really good at helping you QA and QC your structural model. Simply create your Revit model, then use Enscape to move around and look. It’s easy. Then if you want to share that information, just export your view or elements to a .exe file (zip it because most emails freak out with .exe attachments) and done. The person receiving your .exe file could look at your Enscape model and not even have to own Enscape. How cool is that.

To make an Enscape model just open a 3D view and click the Enscape Start button as shown in the image below. 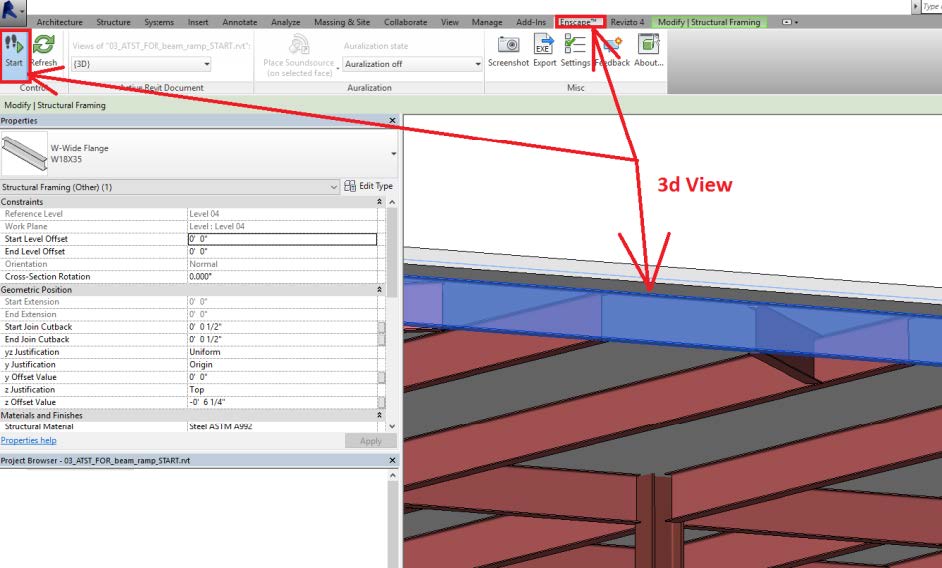 The final model in Enscape looks like the image below. If you want to really spice up your experience, simply walk around on the structure that you modelled. If you fall, then you have modelled something wrong. It’s fun and enlightening at the same time. 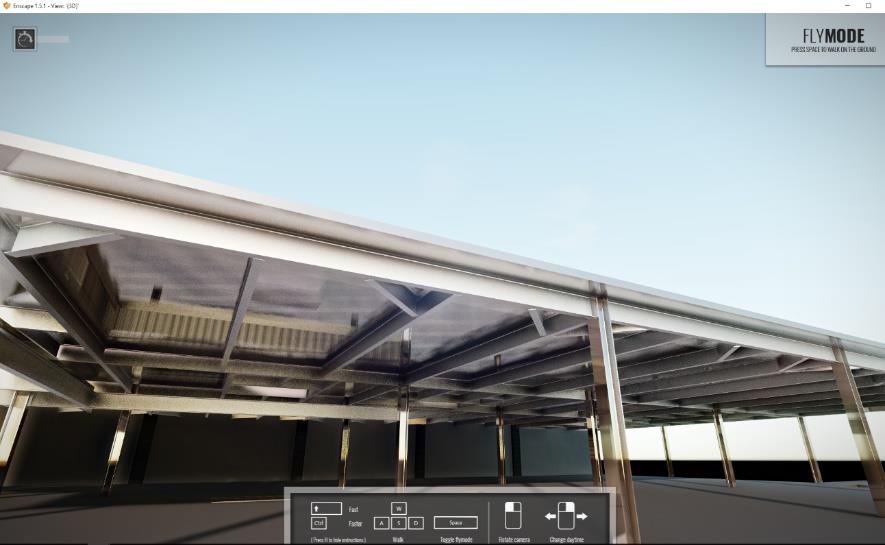 Do you want to isolate any elements? Simply isolate them in Revit then Enscape will update and show them isolated. If you want to share that information, just export your view or elements to a .exe file. 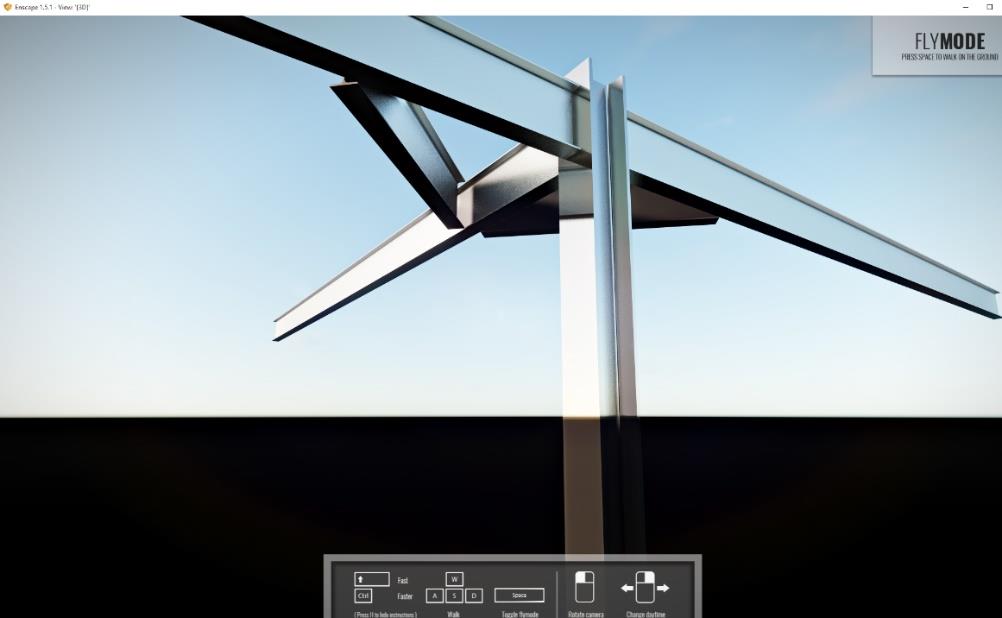 There are many times when you will need to tell the story of how the structural systems need to go together. The problem is construction animations only show the viewer what they are allowed to see based on the present camera positions. What if you could create a construction animation and have the user move anywhere they want while the animation is playing? They could then decide where to look. It is not hard to set something like this up.

First, bring your model from Revit to 3ds Max, then set up your time steps. If you want low resolution animations don’t wait for all of the frames to render; just simply play the preview animations and record your screen. I do this and it saves me hours of render time. Next, bring the animation into a game engine as shown. 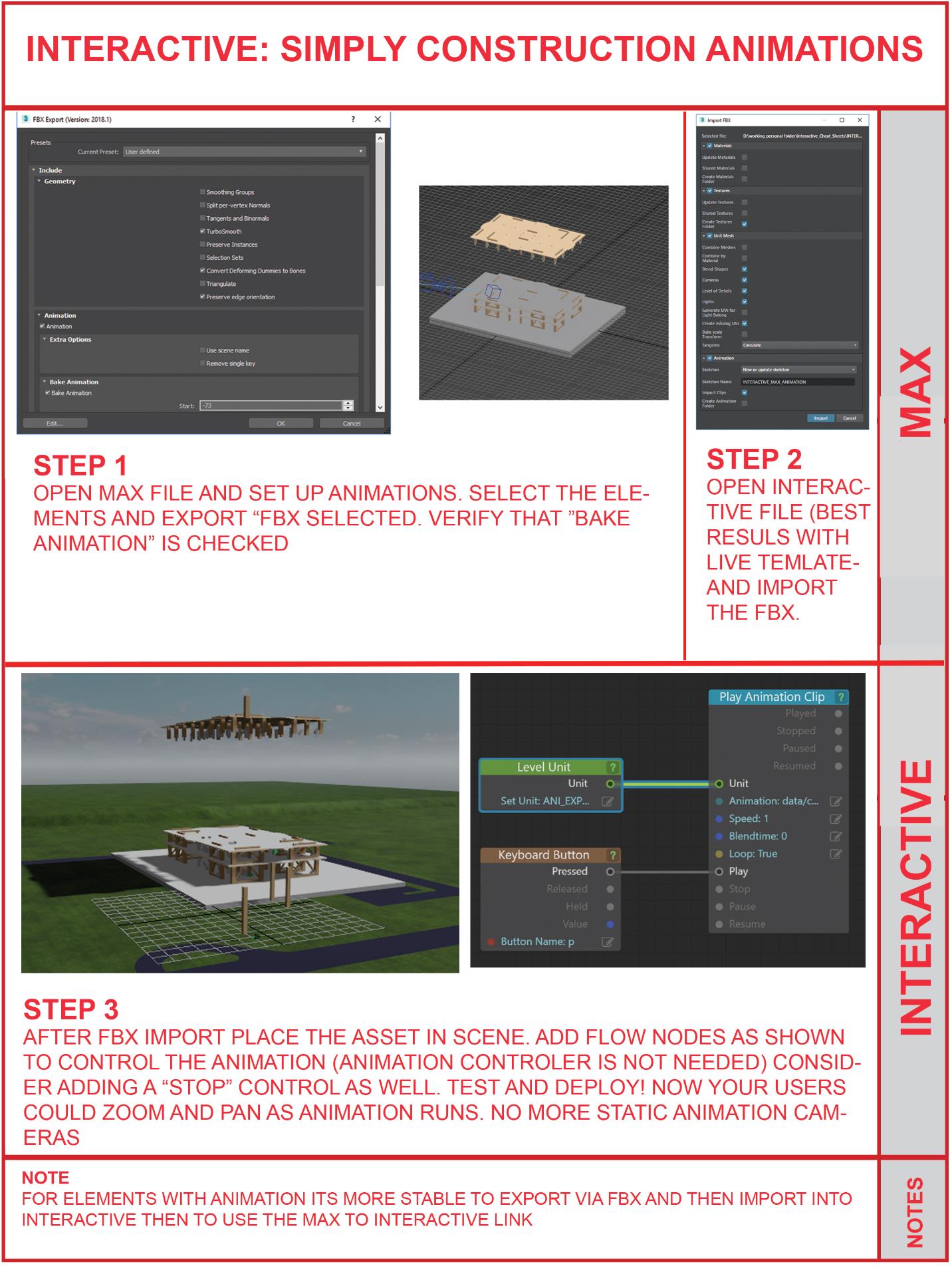 When we talk about using game engine technology for engineering, the conversation goes beyond looking at systems and components. Experiencing and interacting with an environment is a major aspect of a game. Would you buy a game for your PC or console where all you did was walk around and look at things?

Unlike games for entertainment where you can fly or punch through walls or jump from amazing heights without being compressed into a pancake when landing, a game environment for a building project needs to have real-world physics.

The rapid adoption of VR and AR is driving the need for buildings to be added to gaming environments, and we are early on in discovering the possibilities of making the environments interactive. Basic physics already exists in most game environments. Things like gravity, lighting properties, and the fact that you can’t walk through walls can all be experienced without much input or programming in the game engine. These even exist in applications like Navisworks, where you can turn on gravity and collisions.

To take things to the next level, we want to look at adding physics in the virtual model for engineers. We want to experience how objects exist beyond just their geometry and color. The following examples show how to use gravity in game engines to help your project.

Want to QA/QC a structure framing model? Simply bring the model into a game engine, in this case Enscape, and turn on gravity. Walk around the structural beams. If you fall through the structure, then you have a disconnected beam in your model, and it needs to be fixed as shown. 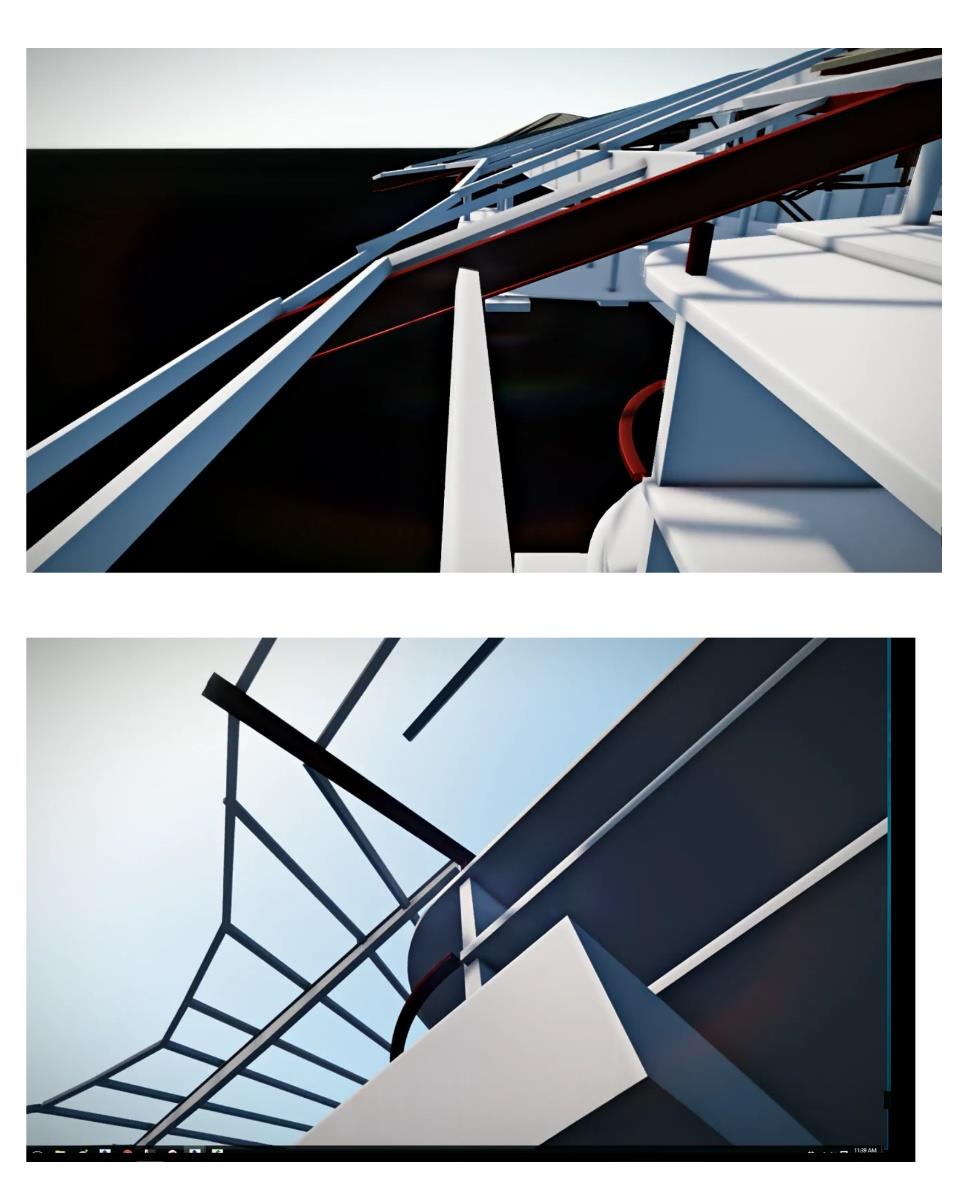 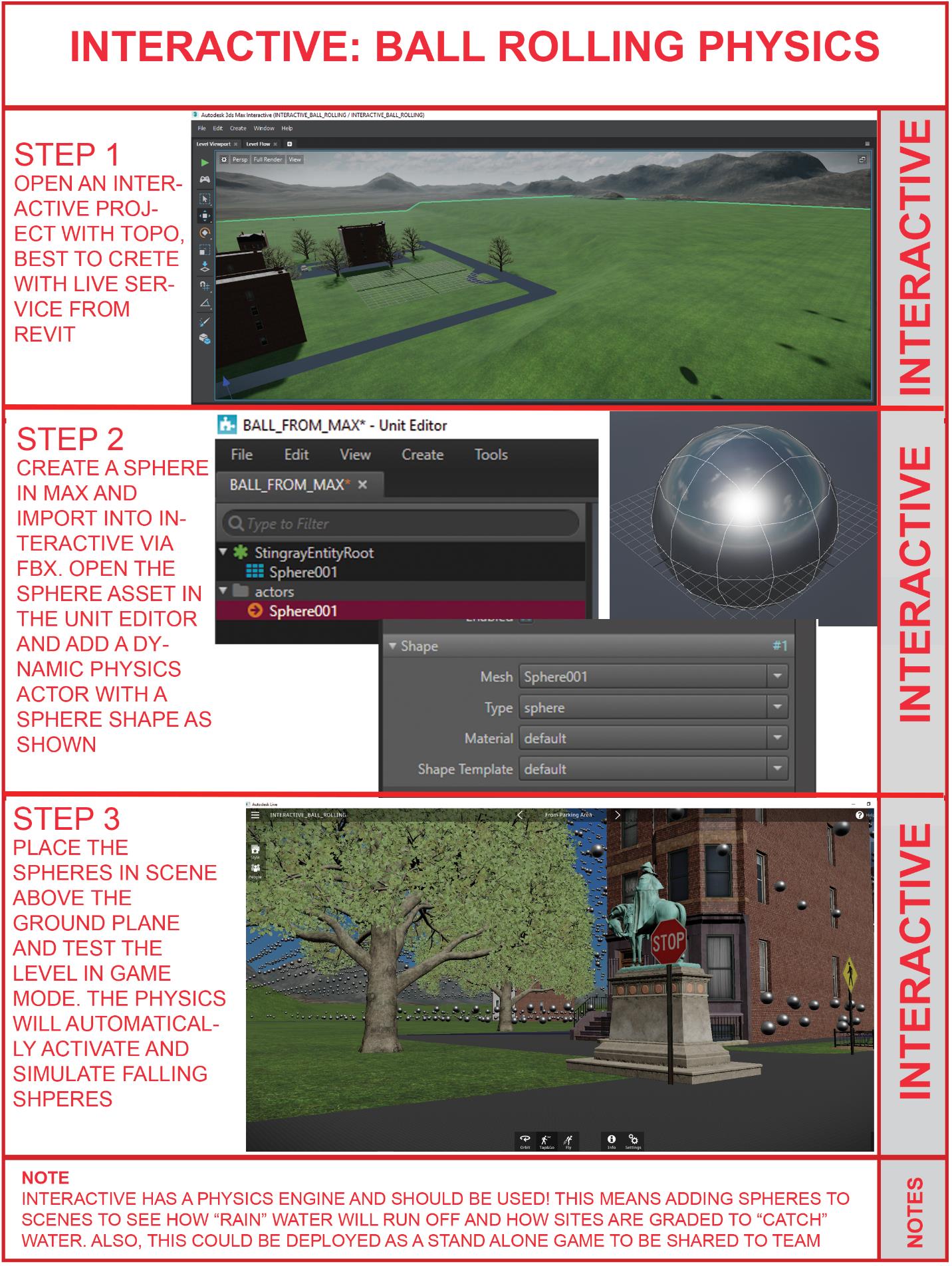 One key component is having objects that are movable. In Revit, we may not care about the mobility of objects because they just sit in space and on construction documents. But for a gaming experience, it may be necessary for objects to move. This doesn’t just mean that some objects need to travel across a distance, but also that things need to rotate or change elevation, or that parts of an object might need to move while the assembly stays in place. In general, this can be handled with parameters applied to Revit content, which can later be manipulated by the gaming engine programming.

For example, you may have a light fixture that is on an articulating arm. If the Revit family is a static model, you would only be able to move the whole thing or you would have to edit the family geometry to specific angles for each possibility. Building parametric behavior into the family makes the gaming interaction more realistic and easier to program.

Marcello Sgambelluri currently serves as the Director of Advanced Technology at John A. Martin & Associates Structural Engineers in Los Angeles, California. Marcello has worked on many BIM projects over the last 20 years including the Walt Disney Concert Hall in Los Angeles; the Ray and Maria Stata Centre at the Massachusetts Institute of Technology; and the Tom Bradley International Terminal Expansion at Los Angeles International Airport. He is internationally recognized as one of the top BIM leaders and contributors to the education and implementation of BIM technology in the building industry. He continually speaks at Autodesk University and the Revit Technology Conference, and he has received a record total of 15 first-place speaker awards between both conferences. Marcello Sgambelluri received his bachelor’s and master’s degrees in Civil Engineering, and he is a licensed civil and structural engineer.

Want more? Read on by downloading the full class handout.

Game engines are known for their innovative graphics and physics. That would make it seem like game engines are only beneficial to architects. This is just not the case. Game engines provide a wide range of benefits to engineering firms, and this class will explain how to get started using them in a way that is easy, fun, and affordable. Game engines could be used to help QA/QC a project, or to help visualize engineering analysis 3D models, or for real-time interactivity using virtual reality...