At the end of Part 5 of this series, we had already modeled the arches that go on the four sides of the vaults, using at least two types of profiles, and our model was at this point: 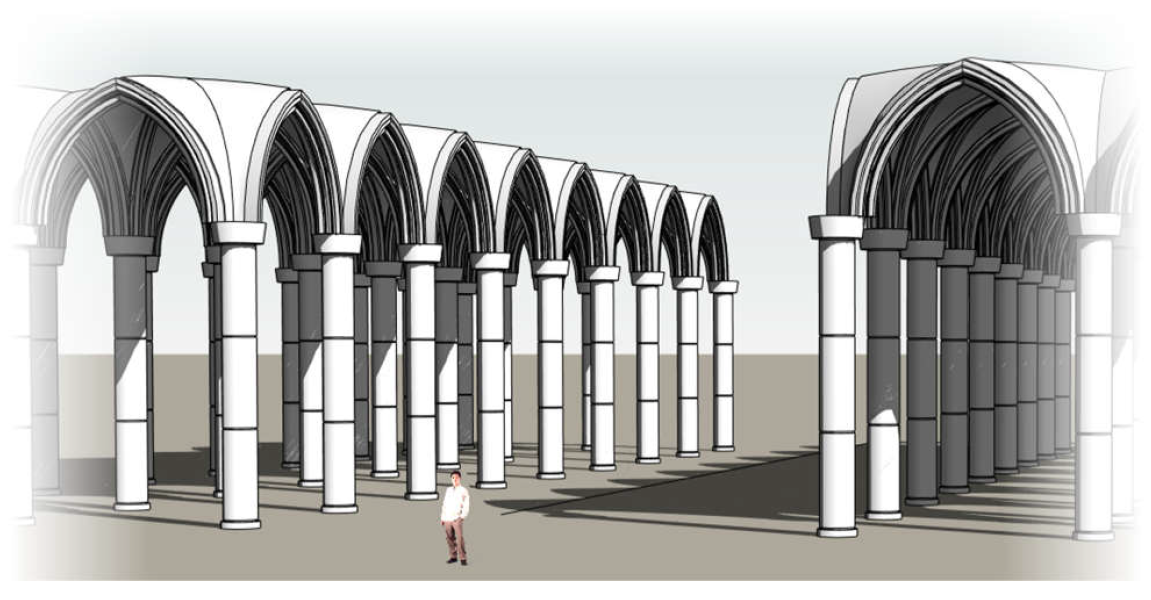 Here in Part 6, we are going to model the thickness of the vaults and do more progress on the modeling of other vaults of the same type in the cathedral.

Modeling the thickness of the vault is easy. In the project, we use Roof by Face, like this: from a 3D view, use Massing and Site > Roof by Face. Then create a roof type that is 4" thick. We will apply a material later. On the ribbon, "Select Multiple" is selected by default. Then, click on the eight surfaces, like this: 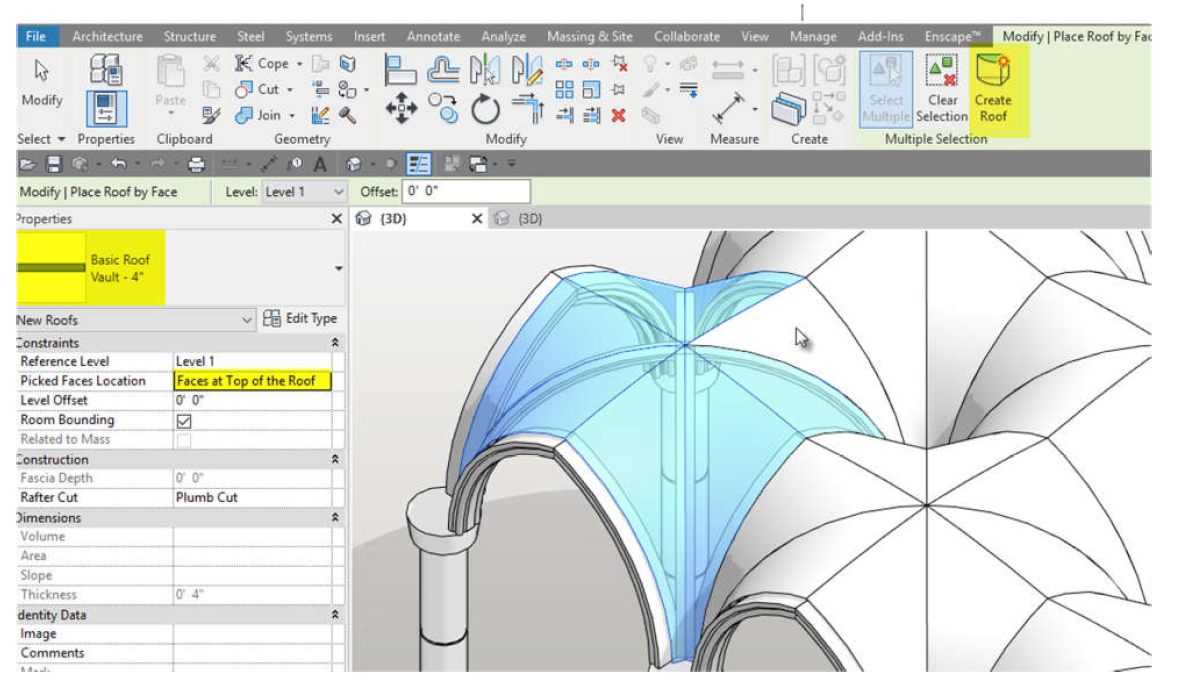 Notice that in the properties, we are using "Faces at Top of the Roof." This is why we left a gap of four inches between the top of the profile families and the path of the arches. That gap is going to be infilled now by the roof. After selecting the last surface, we click on Create Roof, and this is the result: 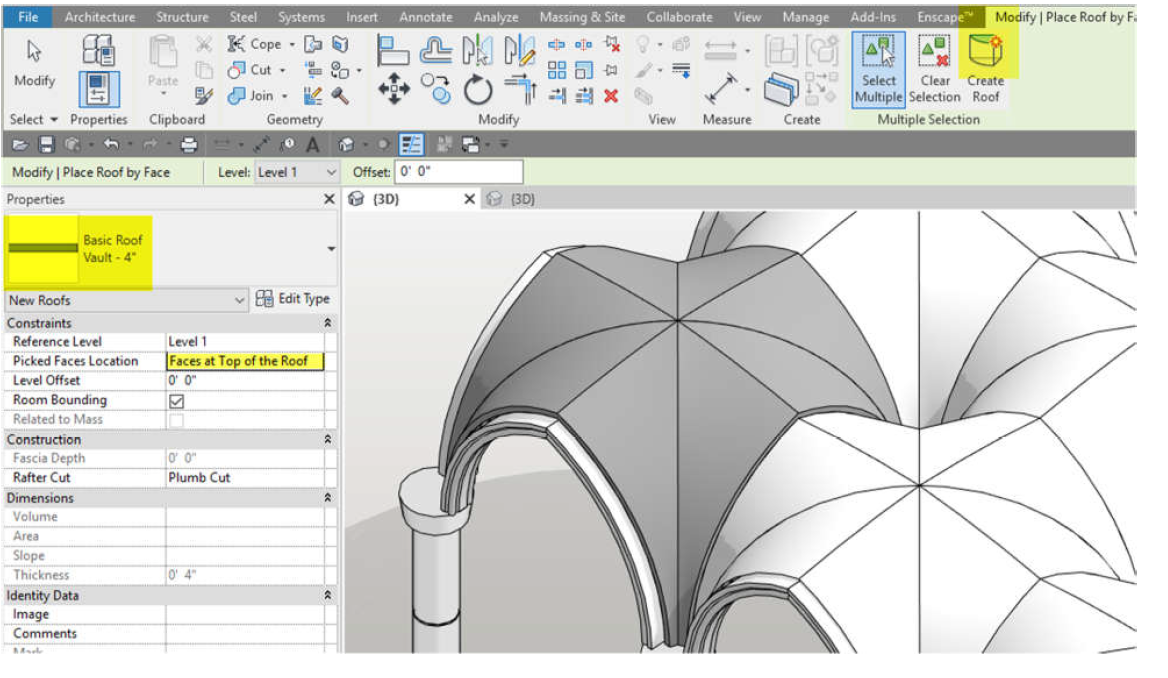 Now we should create a material for the roof type. There are different ways to do that. One way is to use a model pattern that represents blocks of stone. We can use a reduced version of the "Block 8 x 16" pattern that comes with Revit. I don't know exactly what the size of the stone blocks was, but after seeing some illustrations in Viollet Le-Duc's dictionary, I can tell that the block pattern conveys the idea in a good way, like this:

Another way to create the material is using an image file. Anyway, let's leave it like this and let's go to Viollet Le-Duc's dictionary for a moment and read about how the masons put the block stones in between the arches.

This illustration below, number 57 from Chapter 4 of the dictionary, shows how the first courses of a vault were built. That part was relatively easy to do. It's like building a wall with bricks, slightly sloped in the vertical plane, following the curve of the arches and using the arches as support.

However, the inclination of this wall and the distance from point A to point B shown above increases at every course. After this height, the masons needed something to keep the curve consistent, and to get temporary support. That something was this clever device shown below.

Two pieces of wood of the same shape, interlocked and secured with two wedges. This served as a template to maintain the curvature of the vault between points A and B, and as temporary support. To adjust this device to different widths, the wedges were removed, the wood pieces were moved to the desired distance from A to B, and then the wedges were put again. Illustration number 59 below shows the device in section view. I have indicated it as "d" in both images, section and 3D view. Also, I have marked the approximate location of these devices in all the vaults. 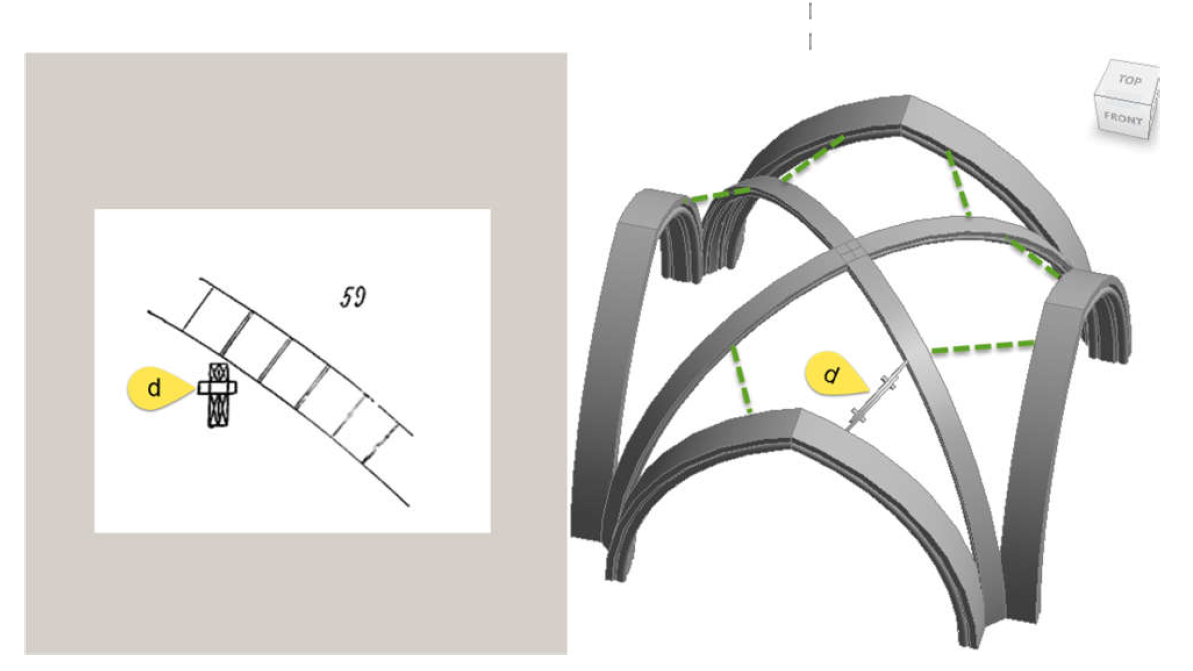 In regard to the direction of courses of stone blocks, there were different ways to do it. In Notre Dame, the direction of the blocks is perpendicular to the pointed arches. In other cathedrals and other types of vaults the direction is sometimes diagonal, similar to the result I got in Revit after applying a material with a model surface pattern to the roof by face. We can see the difference comparing a picture from Leica's panoramic images against a view of our Revit model. 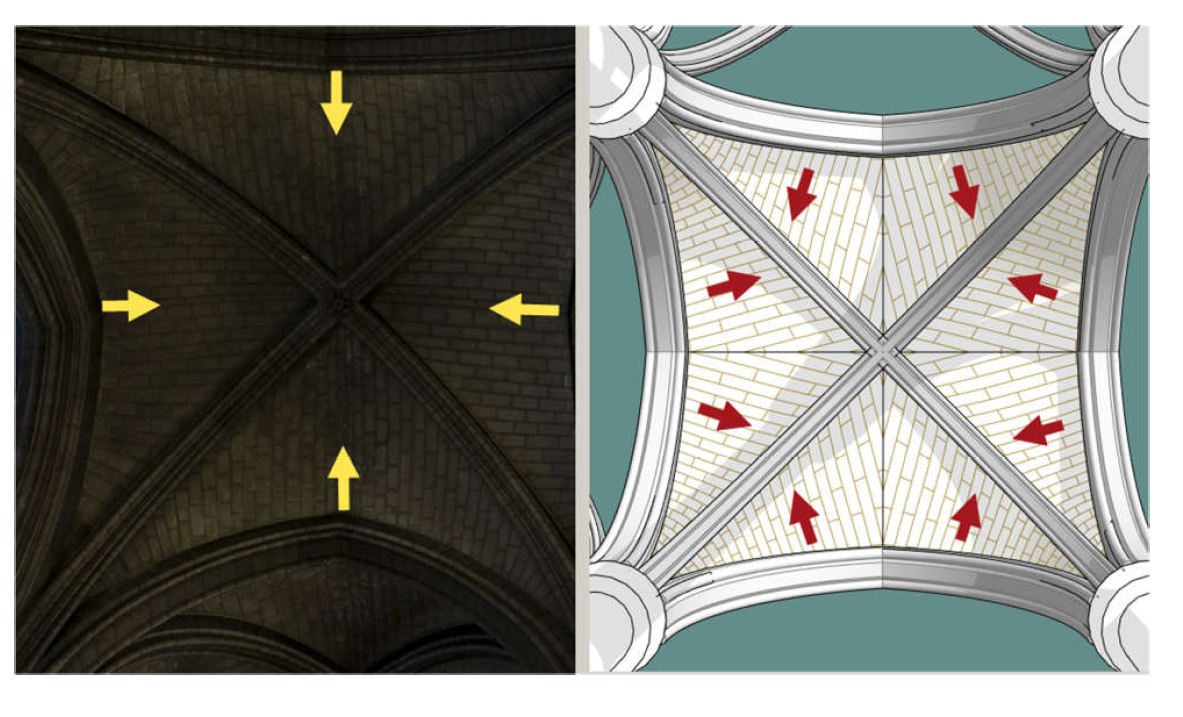 Now that we have resolved the roof of one vault, we can reuse it as many times as needed in the cathedral. I have extended my model and I have created a basic mass of the cathedral and placed this vault in all the places where it goes, first and second floor: 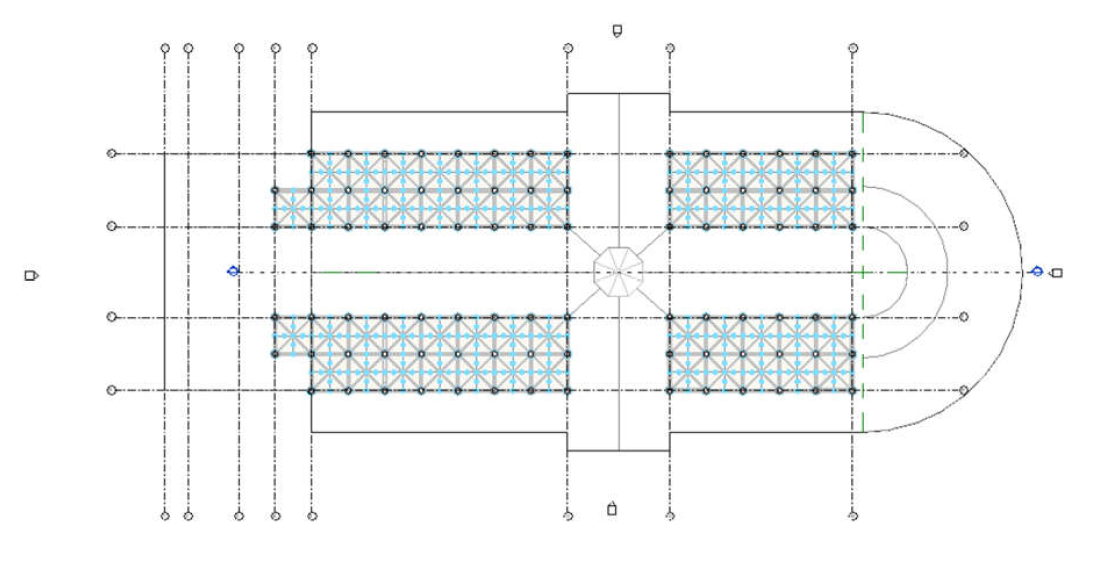 For practical reasons, I am over-simplifying the cathedral because the topic of the class is the typical vault, so I have copied my group of columns and vaults to the second floor and I have added a floor. Now that the vaults have thickness, a partial section would look like this, without the mass of the cathedral: 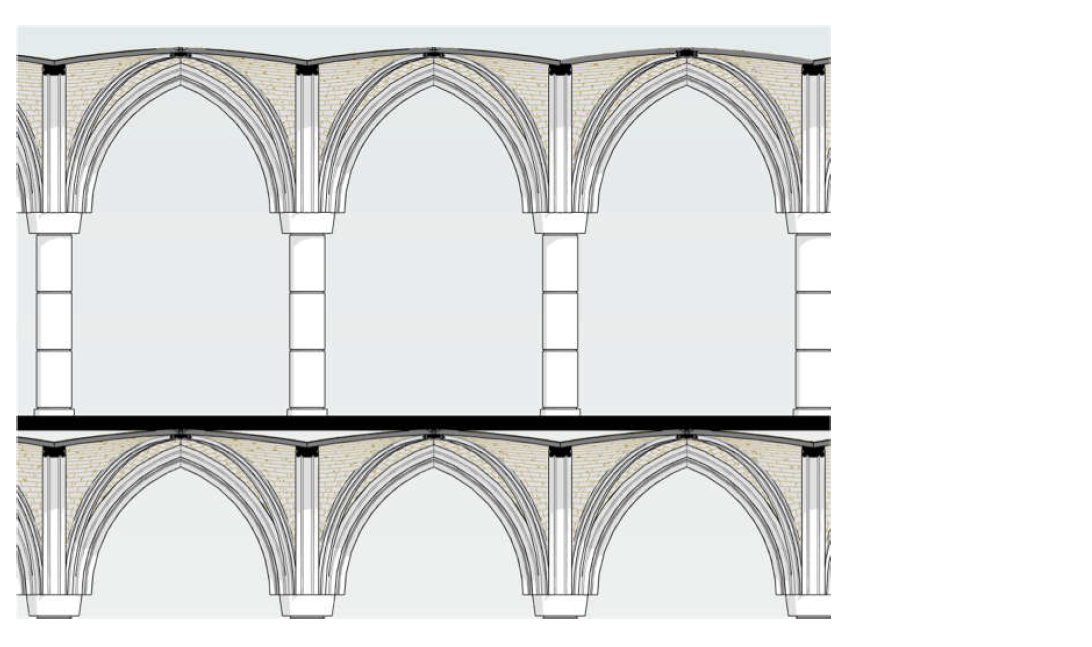 (For this series, I have been using just a generic architectural column family). Now let's go to a transparent front view, with the mass of the cathedral. Look at the size of the man in the main nave: 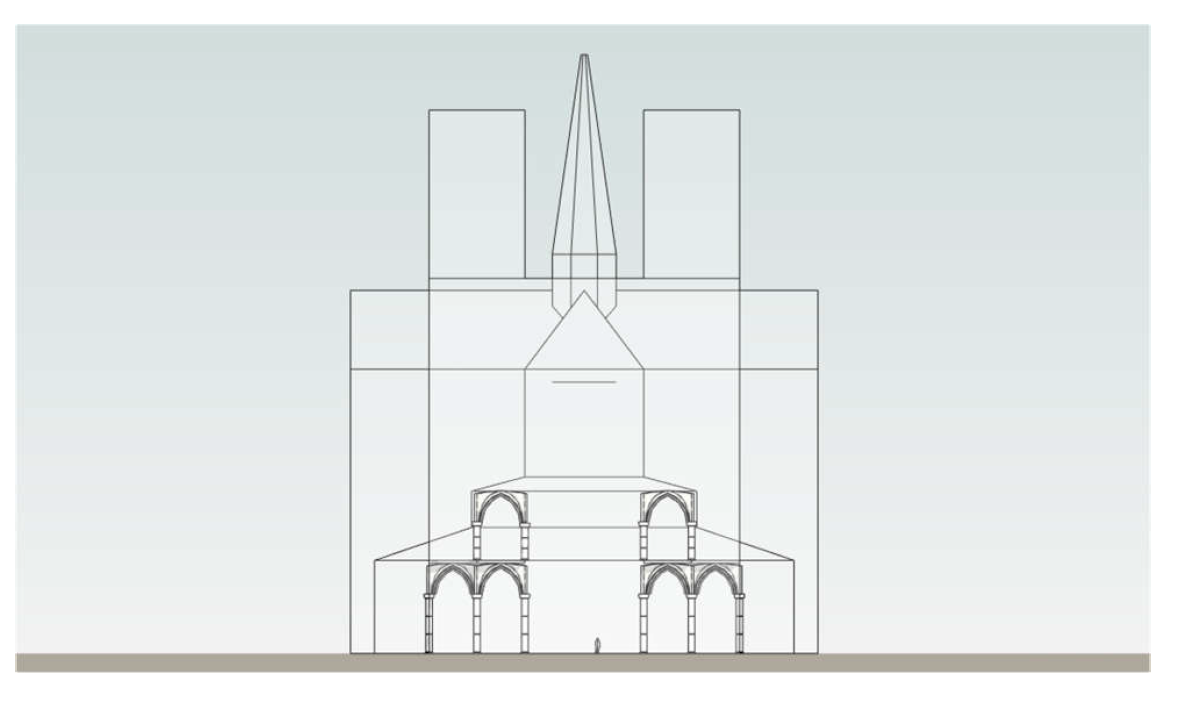 And now let's go to a 3D view of the mass, showing all the vaults of the same type: 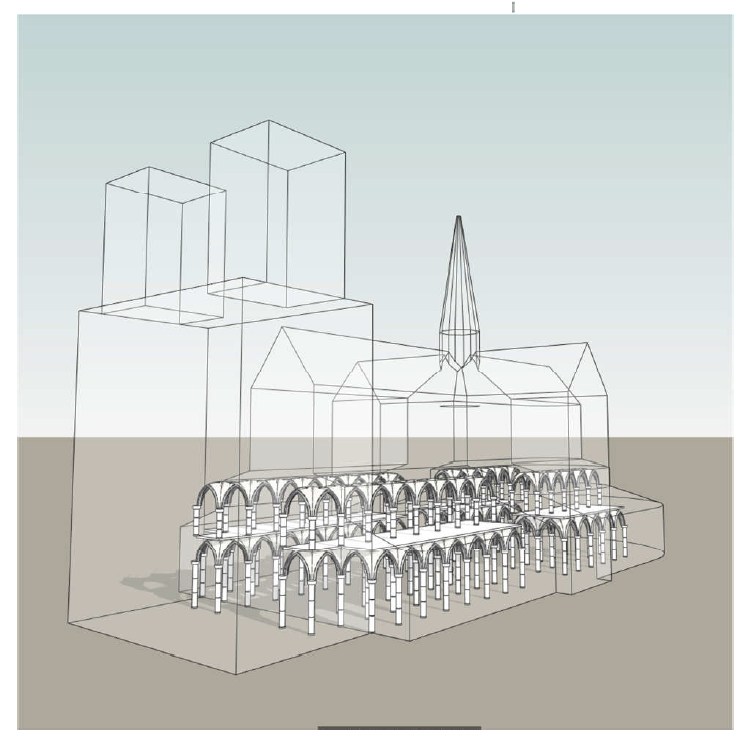 Thank you very much for your interest in this series. Believe it or not, this four-part vault is the easiest of all the types of vaults in Notre Dame. I have learned a lot making this, and I hope that you have learned, too, and that you feel inspired to learn some more.

Alfredo Medina is a very experienced and knowledgeable BIM / Revit professional with a background in architecture, high skills in training, troubleshooting, technical support, parametric modeling, extraction of quantities, definition of standards and best practices, clash detection, and coordination of large BIM projects. Alfredo has several years of experience and a reputation as an expert due to his participation in forums and international conferences.

Parametric Modeling of Vaults for Notre Dame in Revit
…