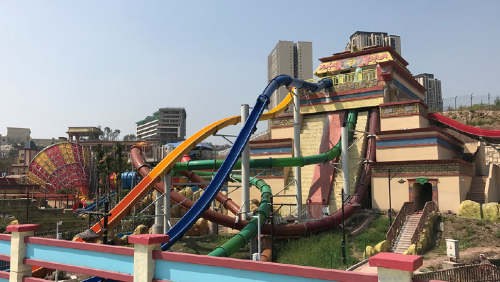 BIM (Building Information Modeling) is great for large commercial projects with conventional geometry, but what about modeling an architectural Mayan ruins site that’s been excavated, or modeling themed columns with adjacent rock work, or pulling quantities for a mountain?

These are some of the challenges we faced when considering Revit software for our theme park projects. In this article, we share the good, the bad, and the ugly of our lessons learned when taking on these unconventional projects, and how we overcame the problems. This is the story of a firm’s quest to design a Mayan theme park in Revit, and how that firm used Revit to set in motion best practices for all its subsequent theme park projects.

It was a sunny day in Boulder, Colorado. I had just started my own BIM consulting practice six months prior, and I was invited to talk to DTJ Design in Boulder, Colorado, an integrated architectural and landscape design firm known for having incredible creativity and progressive project types. I was sitting in a conference room at a table with a group of project managers, architects, and designers listening to them tell me that they wanted to move from 2D AutoCAD to Building Information Modeling. They recognized many of their competitors had already made the switch to Revit, and they wanted to know if it made sense for their practice to do so too.

I remember being very confident, and was thinking, of course. I would help them build out their template, Revit families, and schedules as I had done many times before for other clients. Then one of the project managers told me we have a desire to move to Revit, but we’d like to try the software on a pilot project first. Of course, I thought. We had done this many times before. Leverage your super users, pilot a project, and then implement the process for the rest of the firm.

Then they pulled out multiple hard copy sets and began to show me their project portfolio of buildings shaped like cupcakes, medieval castles, and water slides coming in and out of caves made to look like the amazon jungle. “These are the type of projects we work on. Do you think you are capable of modeling these projects with Revit?” Inside I became nervous, unsure, and self-doubting. I was unsure of my ability to deliver what the project manager was asking, but before I could stop the words coming out of my mouth, I said of course!

Next, he began to show me the project they were getting ready to start. A Mayan themed water park. Columns sculpted to look like deities, cabanas with straw roofs, and signage made to look like snakes. “This is the pilot project we would like you to help us with.” As I thumbed through the sketches, I became even more unsure of my ability to deliver this project in Revit. If I said I couldn’t do it, what did that mean for my consultancy? Had I found a client with a project too complex for my computational design and BIM consulting company? I reluctantly said “Yes! Let’s do it. It sounds like a fun challenge!”

Chongqing was a theme park with a unique set of challenges, including 420 acres of theme park attractions, 160 meters of fall from one end of the park to the other side, and the third largest wave pool in the world. Did I mention the team had never delivered a project like this in Revit before?

Something that is unique about theme park design versus many other project types is that they are very landscape-heavy with multiple large and small structures spread throughout a very large site. 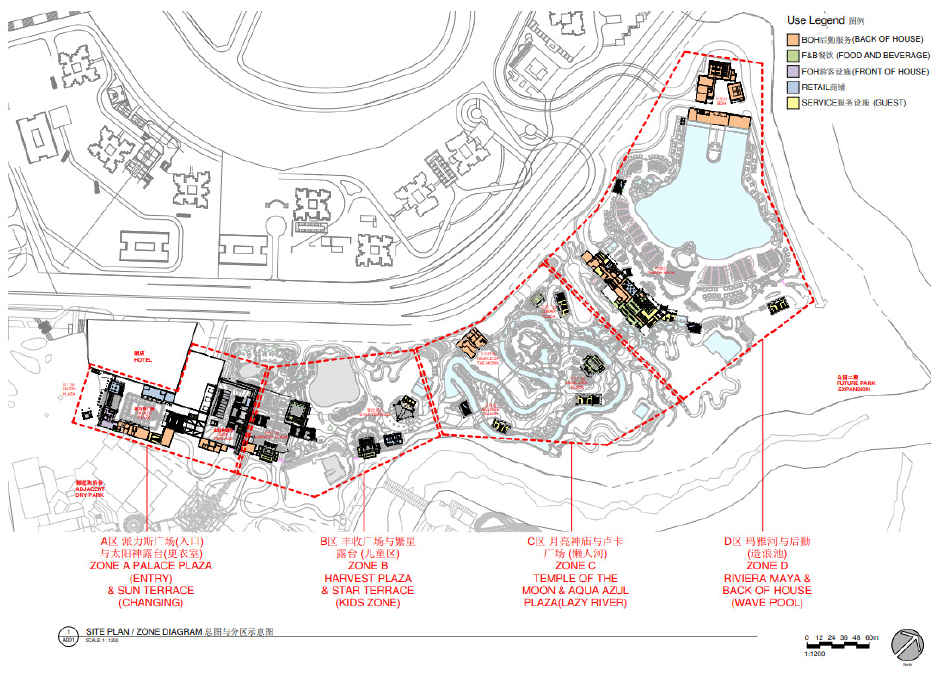 With this unique type of site design, we broke up the structures within their own respective models and linked them into a master site file utilizing shared coordinates.

Given the large integration with landscape, we had to maintain ongoing exports to AutoCAD as that was the program the landscape designers used. They posed a large challenge as the landscape design team was used to architecture working in AutoCAD and utilizing live backgrounds. We set up export views in the site file with view templates assigned and exported all the backgrounds from that file almost daily.

Note that there are more efficient tools to automate CAD exports such as Clarity, but the client had not invested in this software yet.

Given the large amount of grade drop that this project had from one end of the site to the other, this posed another challenge for view ranges. We used a series of plan regions and linked views to try to cut the building in its respective place.

DTJ Design has some of the most talented designers in the world. Their sketching ability is unlike anything I have ever seen, especially in the AEC space. Sketching in lieu of modeling in SketchUp, FormIt, or Rhino became invaluable in communicating design intent from the principal designer. “The computer just doesn’t give us the freedom or efficiency a pencil does,” he said. Scalable sketches became the vehicle for feeding myself and the rest of the team information about the project. We would receive scalable sketches from the designer that looked like this: 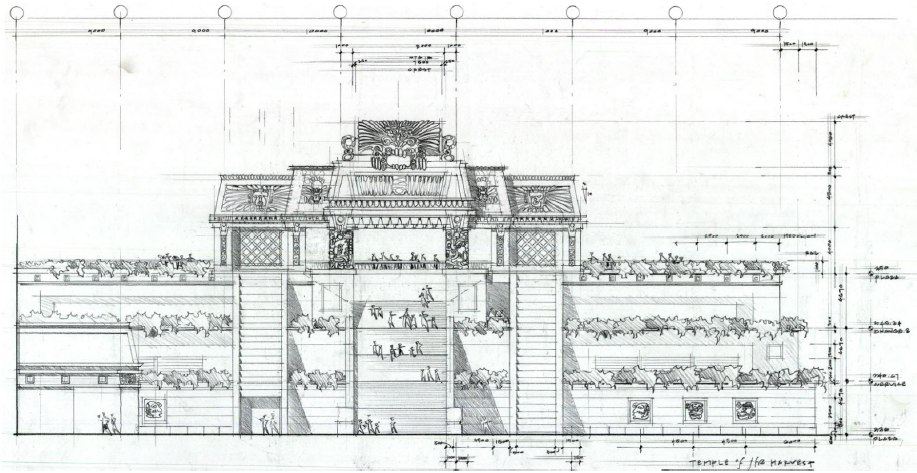 It was the team’s job to take these sketches and turn them into this: 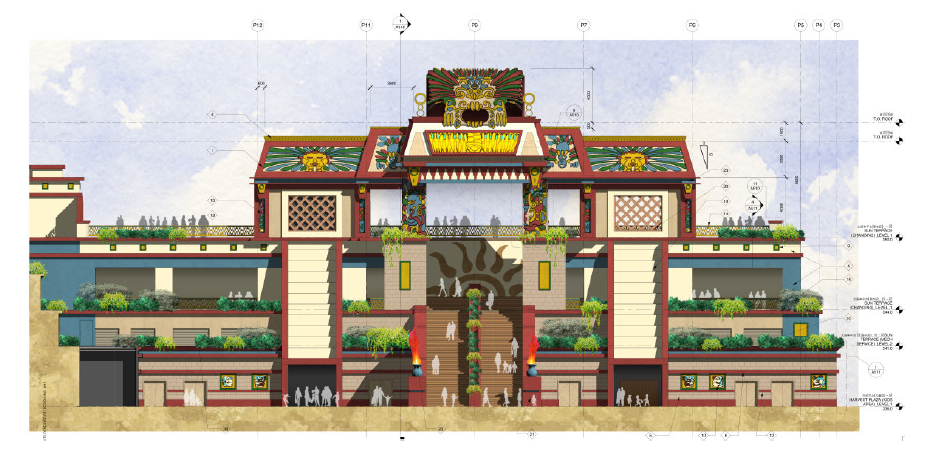 The sketches really went into detail even to include the roof slope ratios giving us some really accurate ways to interpret the sketches that were being fed to us.

Another major task of mine was to create componentized families that could be used throughout the project from one file to the next. I built out parametric line-based families for the railings as the Revit out of the box balusters weren’t going to cut it. 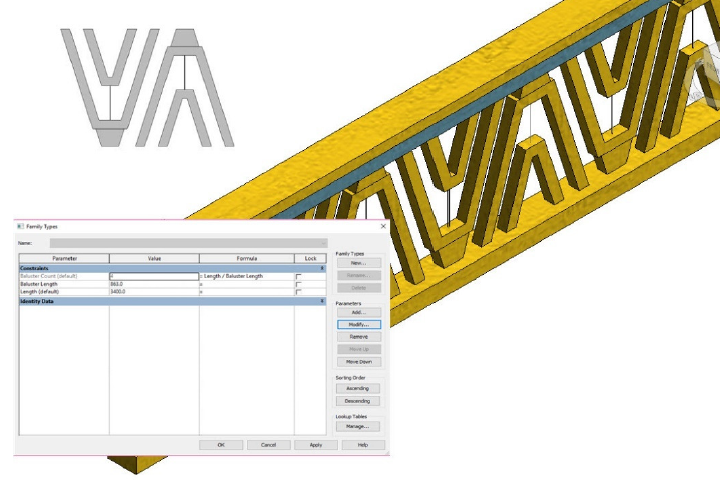 I did the same for much of the decorative elements that would be used throughout the buildings.

Given the quick turnaround and this being the architect’s first project in Revit, we took a leaner approach to this specific project. We decided to Photoshop the sketches from the designer, and import these images as materials that could then be “painted” to the surface of the geometry. The materials were scaled up so that they represented a 1:1 ratio on the surface to mitigate any kind of unwanted repeatability. 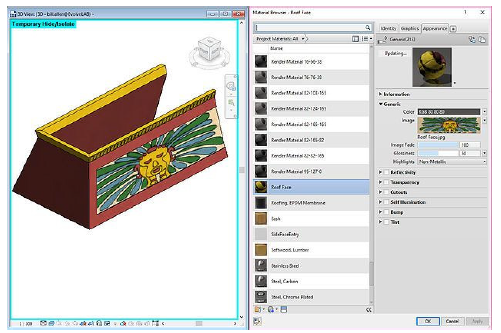 Note: One of the reasons we used materials in lieu of Revit decals was that decals will give you a phantom box around the image if the surface you are applying the decal is not square/rectangular. Given the vast amount of irregular shapes we were applying the graphics to, painting was the better option.

The elevation quality for this project was extremely impressive. We not only showed the project in color with shadows on, but we also needed to represent rock work, trees, shrubs, waterfalls, and architectural information beyond. Please note this was before the Revit “depth cueing” feature.

In short, it required an intense amount of Photoshop. We didn’t have time to wait to be done modeling to hand it off to the Photoshop artist, so we exported “rough” elevations for them that would be put on a separate layer and they would begin Photoshopping while we continued modeling. As new updates came in, they would replace the old building layer with the new one.

We also decided to include isometrics of the project to help inform the architect of record as well as the contractor how the theming components wrapped around edges and surfaces. We didn’t want it to look like a Hollywood set where only the front of the building had these theming components.

Another challenging structure we had to model were the escalator roofs. This was actually one of the lesser challenging tasks I had as I was used to designing complicated canopies for vehicular canopies at hospitals. 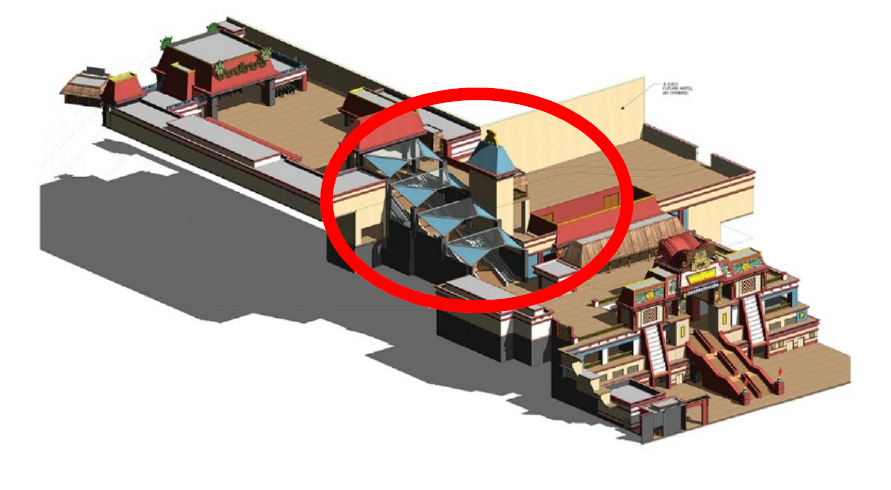 The process is to create a conceptual mass and host a curtain wall system to it in a Revit project.

Rather than modeling the roof thatch which would have been very processor heavy, we modeled the general shape, and then applied the material of the thatch to the shape. We also applied a hatch pattern to the material so when it wasn’t set to realistic, we would have a grid pattern to rotate to make sure the patterning was going the correct direction.

Even though we were delivering a schematic design package, we had a very high level of detailing that occurred for the theming elements on the project which included dimensions, descriptions, and Chinese translations. To accomplish some of these complex shapes, we simply used the wall edit profile tool in Revit, and painted the material of the sketch to the front. 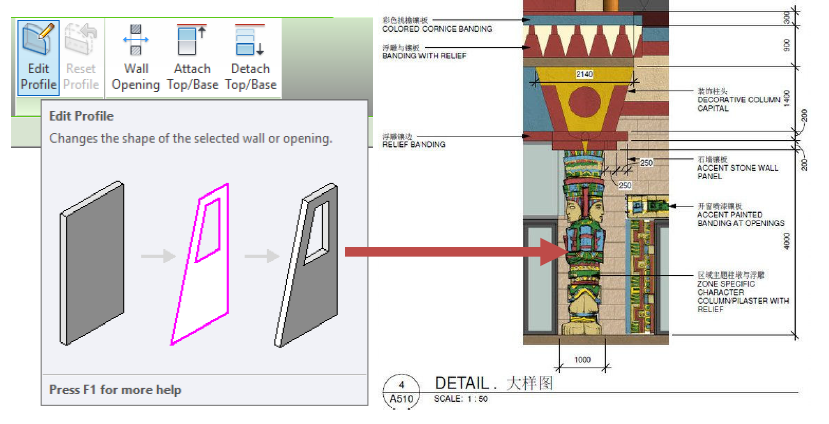 The great promise of BIM is the data. We really wanted to leverage the capturing of data for the project as the previous process typically provided data via Excel, which would have a direct disconnect from the drawings. Leveraging Revit, we were able to get locker counts, plumbing fixture counts, and special data.

Companion Class
BIM (Building Information Modeling) is great for large commercial projects with conventional geometry, but what about modeling an architectural Mayan ruins site that's been excavated, or modeling themed columns with adjacent rockwork, or pulling quantities for a mountain? These are some of the challenges we faced when considering Revit software for our theme park projects. Come and listen as we share the good, the bad, and the ugly of our lessons learned when taking on these unconventional...
Industry Talk 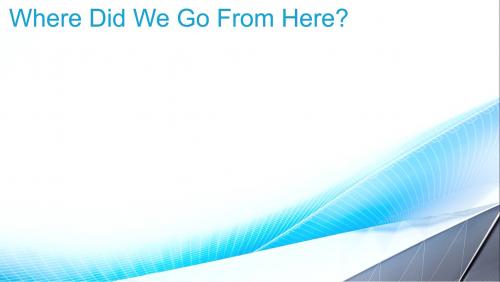