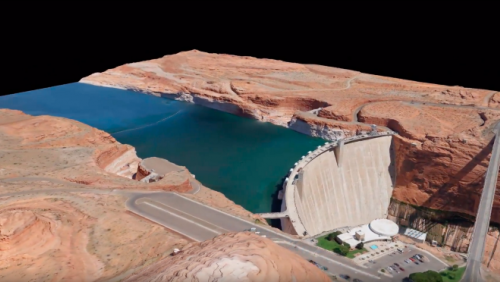 If you were at AU Las Vegas in 2014, you likely remember Pete Kelsey, part of the Autodesk Strategic Projects team. He spoke during an Innovation Forum about creating a 3D model of the USS Arizona Memorial at Pearl Harbor. Combining photogrammetry, LIDAR scanning, and SONAR for the first time, he and his team mapped both the sunken battleship and the memorial building above water to establish a baseline for monitoring the condition of the site and the estimated 500,000 gallons of fuel still inside the ship.

Kelsey will be back at AU Las Vegas in November 2017, this time to talk about his latest reality capture project, the Glen Canyon Dam in Arizona. We sat down with him to discuss the project.

“This is the coolest reality capture data set I’ve ever seen.” — Pete Kelsey

While not quite as famous as the Hoover Dam downstream, the Glen Canyon Dam is at least as important, since it controls the flow of the Colorado River into Lake Mead, which provides power for Nevada, Arizona, and Southern California. Meanwhile, Glen Canyon also generates 5 billion kilowatt-hours of hydroelectric power itself every year. And at 710 feet high and 1,500 feet across, it’s the second largest dam in the U.S., losing out to Hoover by only 16 feet. “This is the coolest reality capture data set I’ve ever seen, and I’ve seen some cool ones,” says Kelsey. “The scale of this place is what makes it interesting.”

Because the dam was completed in the mid-60s, before the days of CAD, the only engineering plans are “10,000 ancient blueprints,” Kelsey says, most of which diagram the various hydrological, electrical, and structural systems in isolation. The goal of the reality capture project is to create an integrated model that enables the U.S. Bureau of Reclamation to better operate, maintain, and protect the dam, which is designated as National Critical Infrastructure, or NCI. “If something goes wrong at Glen Canyon, the entire western U.S. could be in chaos,” Kelsey says. “You can’t have a bad day here — it has to be up and running 24/7/365.” He also thinks the virtual model will have value for education and outreach.

The project will have three phases. Phase 1, completed in 2016, was the reality capture. Phase 2, wrapped up in June 2017, created a Revit model from that data. Phase 3 will be to virtualize the model. “That’s the cool, sexy part, at least for me,” says Kelsey.

By Land, by Air, by Water: Capturing the Data at Glen Canyon

Because of the NCI designation, security is extremely stringent on the site. “There was no chance they would let us fly drones around there,” Kelsey says. “We didn’t even ask.”

Instead, he and his team, including Shaan Hurley, David Dreffs, Carlos Orona, and a team from the U.S. Bureau of Reclamation, started by using aerial photogrammetry. Though the team would eventually go on to do laser scanning of the exterior from the ground for greater detail, Kelsey points out the effectiveness of the photogrammetry approach: “We rented a medical rescue helicopter in Page, [Arizona], a nearby town, and shot photos from a digital SLR camera for 20 minutes, then processed the model in less than a day.” With that photogrammetry process alone, Kelsey was able to generate this rendering:

Afterwards, the team performed LIDAR scanning from the ground, then combined the two models in ReCap. The LIDAR provided the accuracy and detail, the photogrammetry provided the photorealism.

Inside the massive structure that houses the eight hydropower generators, the team used a drone for photogrammetry.

They also did a SONAR scan of the underwater topography of Lake Powell for a quarter mile upstream from the dam. The result, so far, is an Autodesk ReCap file that shows the dam, part of the upstream lakebed, and both the interior and exterior of the hydropower station at the dam’s base: 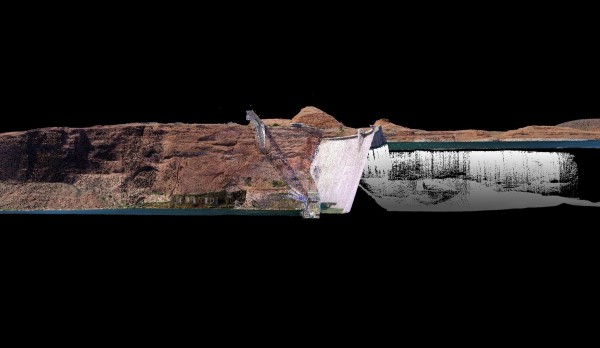 In the third phase of the project, they’ll create a virtual model with systems represented that can be explored in real time. “Once we move into the virtualization phase, we hope to use virtual reality to show stakeholders what’s possible,” Kelsey says.

“The ways in which this data can be repurposed are countless.” — Pete Kelsey

The virtualization of Glen Canyon will be a first for infrastructure at this scale, as far as Kelsey is aware. If it’s successful, it’s likely that the team will go on to create models for other NCI dams as well. “It’s definitely creating buzz within the Bureau of Reclamation, and the Army Corps of Engineers is paying close attention, too,” says Kelsey.

Kelsey sees this as just the beginning of a new era in which heavy infrastructure designed and built before the invention of CAD is brought into the digital realm with the help of reality capture technologies. “The ways in which this data can be repurposed are countless,” he says. “Operations and maintenance will be the initial focus, then safety and security, but the sky’s the limit here. We’re only limited by our imaginations.”