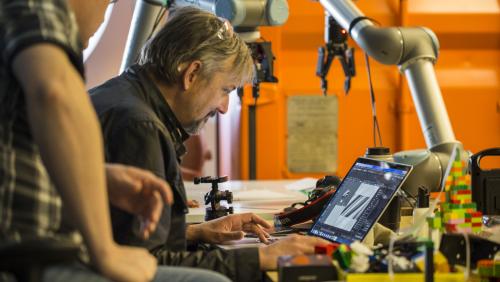 The field of robotics has come a long way over the last half century. But while robots have found important roles in many industrial contexts, they have always required the skills of trained roboticists to write the code that explicitly defines the robot’s task. And setting up a new robot could take weeks or months—even for the most experienced programmers.

Now a new generation of intuitive and intelligent robots is emerging, built with innovative sensors and increasingly powerful artificial intelligence. Instead of programming them by writing code, you just show them what to do. 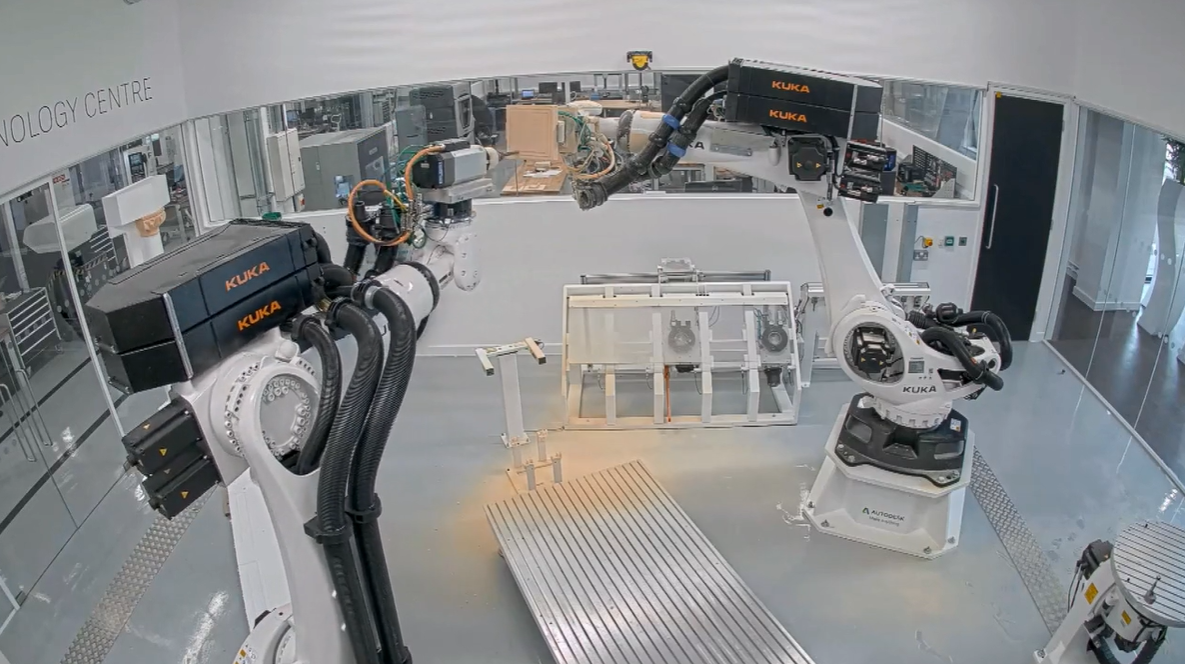 Evan Atherton, a senior robotic research engineer in the Robotics Lab at Autodesk, took to the stage in the AU Theater to talk about the rise of creative roboticists. He explained his team’s efforts to make increasingly intelligent robots accessible not only to trained roboticists, but to any creative individual. “This isn’t a story about innovation, this is a story about access,” Atherton said. “It’s about giving humans access to more intuitive tools for programming robots that don’t require them to write any code.”

“This is a story about access. It’s about giving humans access to more intuitive tools for programming robots that are built in familiar environments that don’t require them to write any code.” —Evan Atherton, Senior Robotic Research Engineer, Autodesk

Atherton shared their work with the digital twin, which enables you to instruct a robot by controlling a virtual version of it in VR. And he described the team’s work on Mimic, a free, open-source plug-in for Maya that provides an animation-based workflow for programming industrial robots. “If you take a 15-minute YouTube tutorial on Maya, then you can program a robot,” he said. “You get very detailed control over the robot’s motion without programming the robot explicitly.”

Atherton’s colleague in the Autodesk Robotics Lab, Senior Research Engineer Heather Kerrick, spoke on the AU Theater stage about future workflows for robotic fabrication. She shared how colleagues in Birmingham, England are using Slack, a cloud-based collaboration and chat platform, to communicate with their robots. And she described how she’s used the Mimic plug-in for Maya to build a CAD-Informed Robotic Assembly (CIRA) system. The prototype can intelligently assemble Lego structures—in this case, a car—from an exploded 3D model, without its movements in space explicitly dictated in advance.

“In most cases, the person designing the part is different than the person that will be running the robot. How do you communicate the maximum amount of design data to the robot with the least amount of manual work?” Kerrick asked.

"In most cases, the person designing the part is different than the person that will be running the robot. How do you communicate the maximum amount of design data to the robot with the least amount of manual work?" Kerrick asked.

Kerrick and Atherton both point out that, at the end of the day, most people are interested in getting a task done, not learning how to program a robot. The Autodesk Robotics Lab is making that possible. As Kerrick put it, “We’re trying to get to where we can say to the robot, ‘Do this task for me,’ as opposed to having to get into the nitty-gritty and tell it where exactly to go in 3D space.”

Robots have come a long way from the simple pick-and-place operations on production lines and are now being introduced into a number of applications. In this AU London industry talk, Richard Pedley shares robot programming techniques and methods and technologies that can improve robot accuracy.

Robots are able to do much more than simple welding (or pick-and-place). Tatenda Mushonga demonstrates the workflows to use robotic arms for subtractive, additive, and post-processing tasks.

This Bricklaying Robot Is Changing the Future of Construction

There aren’t enough skilled workers to build all the structures we need for our growing global population. The Hadrian X is a responsive automated system that can fill the gap by laying bricks without human control. Our partners at Redshift cover the story.