Compelling renderings are an important tool for successful storytelling of designs and concepts to a wide audience. While this article will focus on examples of product design within the rendering environment of Fusion 360, the ideas described can be applied to any rendering situation and any rendering program. Learn how to achieve impressive, photorealistic renderings, from basic layout and composition to best practices for using materials, lighting, and environment effects.

Rendering is a key tool in CAD. It provides the opportunity to visualize and communicate design intent to different audiences and stakeholders. A good rendering provides a window into how designers and engineers envision their designs to exist in the real world. The value of rendering cannot be understated, and it is helpful to understand effective use. Thinking of renderings as a communication tool is accurate but also limited. Rendering is a visualization tool that can inspire, persuade and attract viewers, giving them an insight to the type of experiences and emotions that a design could entice in its users.

At the most fundamental level, renderings are stories. Each rendered image can tell many details about the functionality, appearance, scale, use, and even potential value of a design. People have a natural attraction to visual cues and can absorb in seconds a large amount of information in terms of shapes, colors, textures, position, scale, etc.

More importantly, viewers make conscious and unconscious connections between these elements in fractions of a second, which can generate very strong and emotional reactions. J Mays, prominent industrial designer for Ford, VW, Audi and Whirlpool, talks about how consumers decide if they like a product in less than three seconds, just from taking a quick glance at it. This quick reaction applies to products ranging from pens to automobiles. This is why a rendering is an important opportunity for communicating the visual story of a design.

Elements of a Good Story

An effective rendering needs preparation, technical skills, and most important, a clear message. When all of these elements come together, they can elevate the digital image of an object into an engaging visual that communicates, inspires, and moves.

There are four general categories that define how a rendering should come together:

The material in this article focuses on technical setup, intent, and composition of renderings. The technical setup is based on the use of Fusion 360. The rendering environment of Fusion 360 is effective and easy to use, with a functionality similar to other popular rendering tools such as Keyshot. Model preparation is not directly covered here, as it relates more to modeling workflows and fabrication considerations. To learn more about modeling techniques in Fusion 360 and related topics, see my previous AU classes. The principles for intent and composition are relevant to many visual compositions such as renderings, paintings, illustrations, and photographs.

Below is a description of the settings included in the Fusion 360 render environment. These descriptions will be useful to navigate and understand how to create renderings. Constant experimentation and adjustment of these settings will lead to superior results and more engaging, photorealistic results. 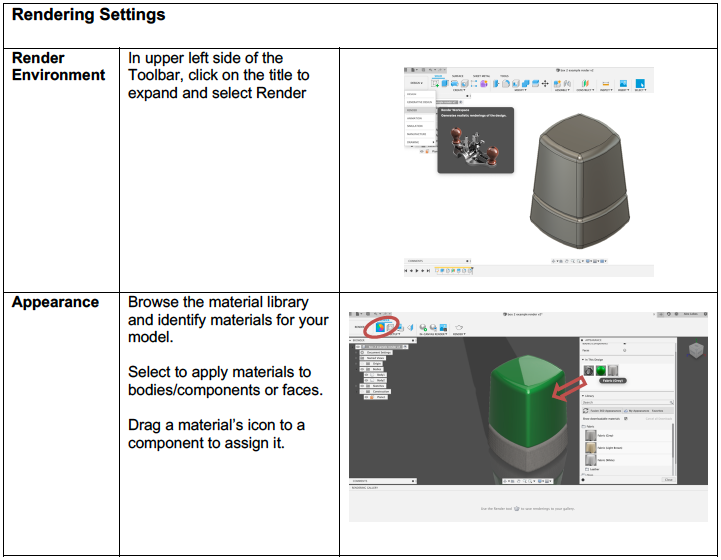 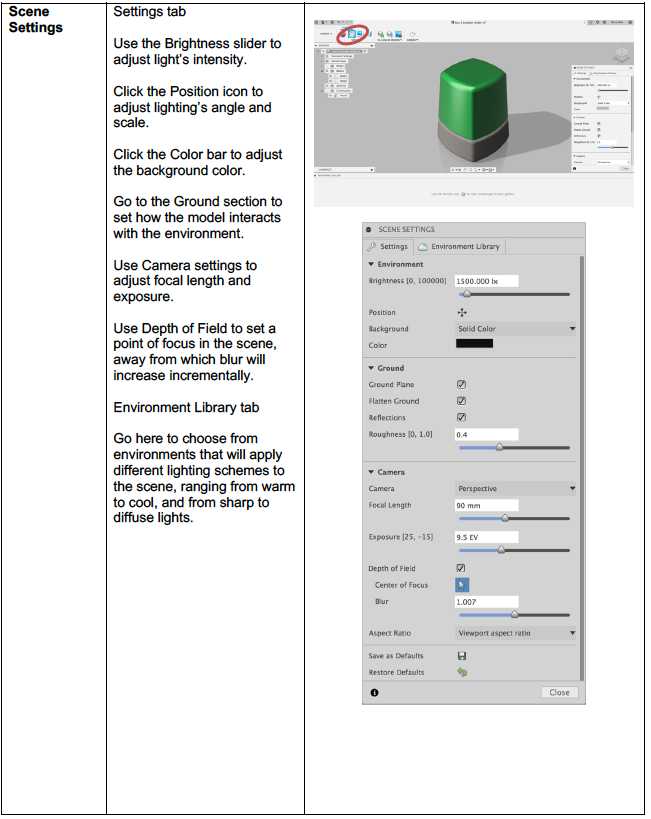 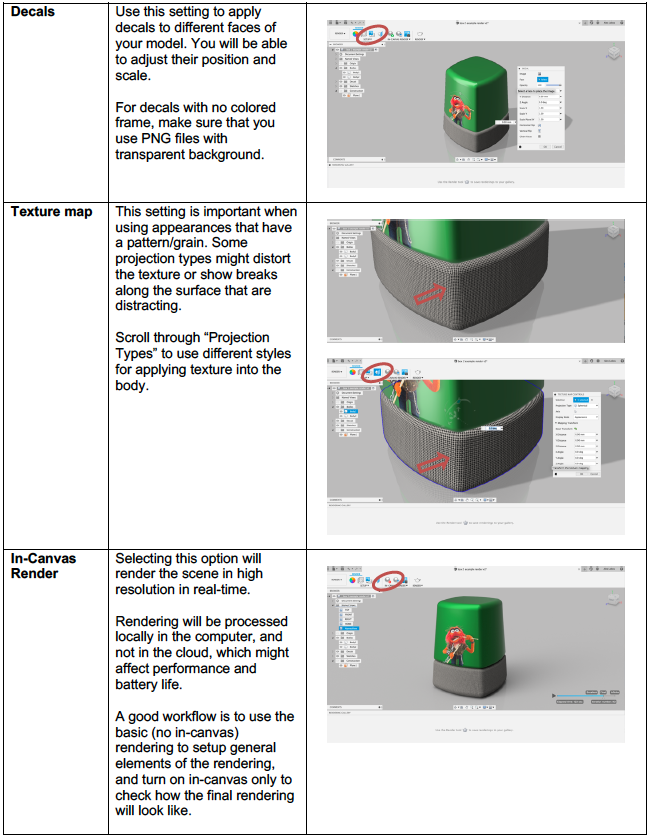 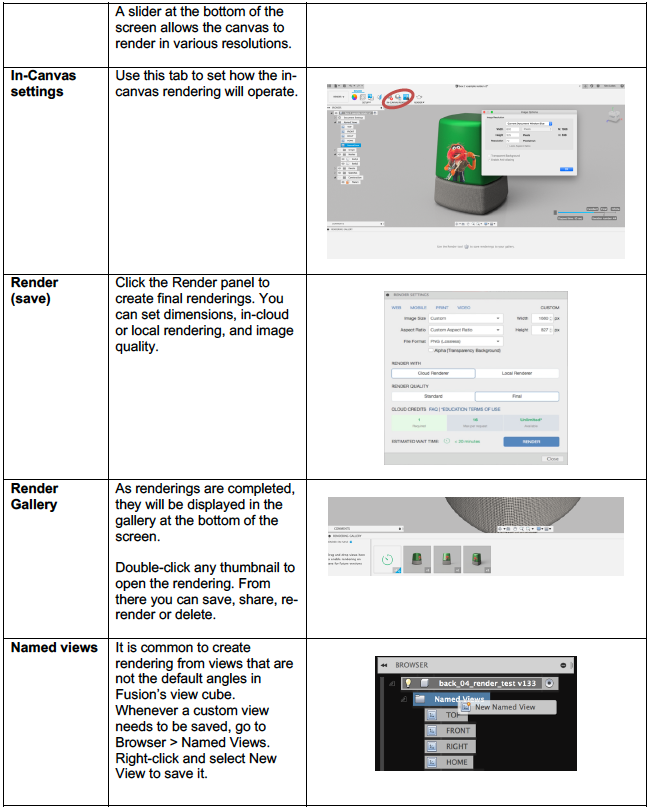 The phrase, “story is king” is widely known in the movie industry, and it also applies to photography and rendering. The most important element of a rendering is the message that it communicates. A rendering without a clear message becomes a simple display of a CAD model in a relatively realistic scenario, as illustrated by the flashlight in Figure 1.

The message of the rendering depends on the application, and it doesn’t have to be a big message with hopes of changing the world. Some renderings can be highly technical, explaining as clearly as possible details of a design. In this case the story can be as simple as demonstrating how a set of mechanical parts go together, or how an object will fit in a given space, such as the turntable in Figure 2.

Others can be aspirational, making audiences imagine how they would use a design in specific scenarios, or to insinuate how an artifact can be empowering and enjoyable to use. Others can be emotional, moving the product to an abstract level where details are not as important as the design’s overall personality as seen in the close-up in Figure 3.

The type of story that wants to be told will eventually define elements such as the position of the camera, the materials chosen for the design, the color and depth of the background, the intensity and angle of the light, and the position of the product within the frame, to name a few elements.

Along with defining the story of the product that wants to be told, it is important to think of who the audience is. A rendering that works well at a meeting with a manufacturing team might not work well in a promotional post in social media. Technical renderings need to be more descriptive and focus on specific details of the design, while aspirational ones can be more dramatic and use effects that provide strong emotions and dynamism.

Good visual composition is the result of combining multiple elements in a thoughtful way that align with the message that wants to be communicated. Below are a series of concepts that are useful for creating images that are compelling and visually engaging.

One of the most popular and simple methods for arranging an image is to use a grid guide of three columns by three rows, which creates two horizontal and two vertical lines. The intersections of these lines are the ideal spots to place the main characters of a rendering. Elements in these locations look naturally balanced within the canvas. Our eyes intuitively move to these four areas when looking at a picture, as seen in the backpack design in Figures 4 and 5.

Another way of framing the canvas is by imagining a diagonal axis that runs from one corner of the scene to the opposite one (upper left to lower right and upper right to lower left). Aligning elements along these axes creates a strong flow, making great use of the space in the canvas, as noticed in the drum set in Figure 6. Diagonal axes are also useful to move between foreground and background, developing a sense of hierarchy and narrative.

Arranging elements in a symmetrical way can be an effective tool for creating dramatism, creating a sense of stability, or bringing the eye to a central focal point, as illustrated in the stool combining Voronoi patterns in Figure 7. Learn more in my AU 2018 class.

Symmetry should be used in a precise and deliberate way. Images that look “almost” symmetrical do not create a good effect in viewers. They can either create visual tension or give out the impression that the image was put together without much attention. The takeaway of this technique is to show intent: either make a scene clearly symmetrical or clearly asymmetrical. Anything in between feels confusing and careless.

Every good story has main characters. In most cases there is only one main character, and sometimes you can have two or three. Anything more than that can start getting confusing. If multiple characters in a story have the same level of importance, the story becomes confusing. The same principle applies to a rendering: there has to be a focal point, a main reason for why a viewer looks at the image, as evident in Figure 8.

Sometimes a rendering might have a couple of focal points, but if too many elements need to receive attention, they will actually neutralize each other and none of them will stand out, particularly in a story that lives only in a single image. Focal points are achieved by using a variety of attributes such as lighting (the brightest part of the image), position (occupying one of the four points of rules of thirds), position (foreground instead of background), and depth of field (being the sharpest area of the image). Determining how many and which elements will be applied to a rendering depends on each particular case and its goal.

This concept is tightly connected to focal point. Images that are too busy become hard to read and their key elements get lost. This applies not only to parts of a given design but also to other elements that are part of the environment of the scene. While a rich background can provide context and ambiance around a design, it should complement the main character and not compete against it. Leaving plenty of negative space helps to maintain the attention on the main elements of the design. With few components in scene, it can be easier to tell a clear story.

Alex Lobos is an industrial designer and educator focused in sustainable design, emotional attachment, and CAD applications. He is graduate director and professor and Industrial Design at Rochester Institute of Technology, New York. At Autodesk, Alex is a Fellow in-residence in Strategic Foresight, Expert Elite for Fusion 360, member of Autodesk University’s Advisory Council, AU Featured Speaker and recipient of Fusion 360’s Education Award.

Fusion 360 software is a powerful CAD software system, and one of its most powerful capabilities is the Autodesk Rendering environment. This class will cover how to achieve impressive, photo-realistic renderings. Topics will include everything from basic layout and composition to best practices for using materials, lighting, and environment effects. While this class will focus on examples of product design within Fusion 360 software’s rendering environment, the ideas described can be applied to...