In the past two years, the pandemic has changed the way studios and artists work together. But a decade before remote working became common, filmmaker Cinzia Angelini assembled a global team in an independent virtual animation studio to create the 3D-animated short Mila. Angelini and a volunteer crew of 350 artists from 35 countries worked for more than 10 years to fulfill her big vision—without a budget. Unified by production in the cloud, they delivered an award-winning film that tells the moving story of a little girl living through the chaos of war. 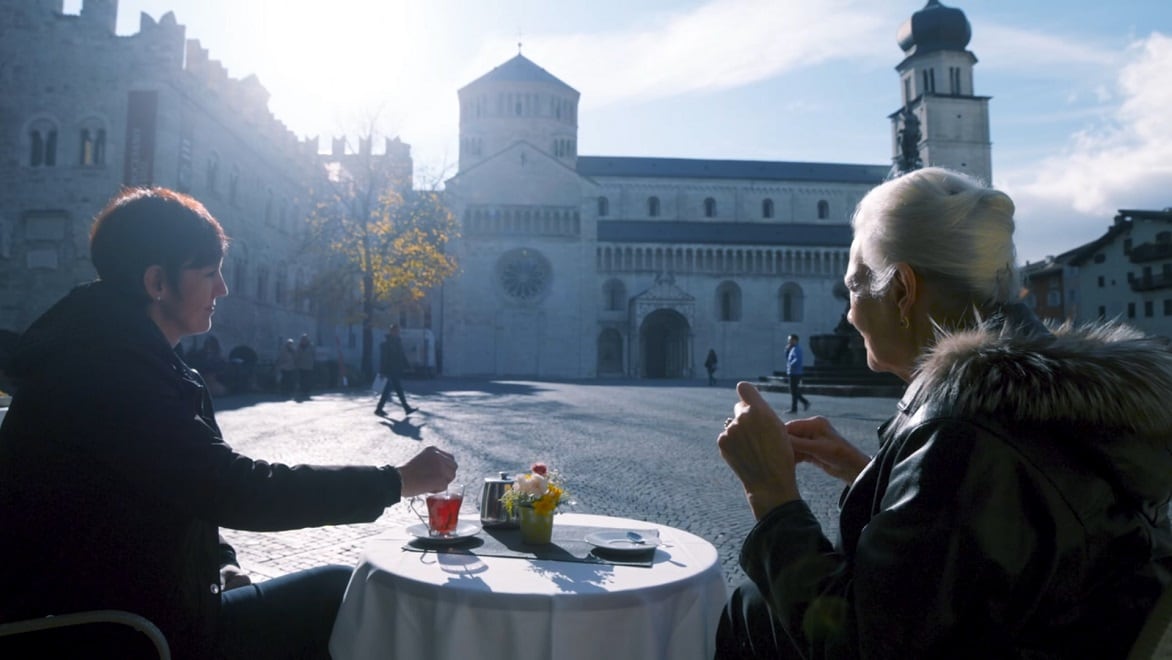 A family story with a universal theme

Cinzia Angelini hails from Milan, where she grew up hearing stories from her mother’s childhood during World War II. Those stories inspired her independently produced film, Mila. “My mom was just 5 years old during the war, and her hometown of Trento was heavily bombed in 1943,” Angelini says. “She always talked about how she felt when the bombers were coming. [Frozen with fear,] she would not move or run to the shelter until somebody would pick her up.”

When Angelini was a young woman in the 1990s, the Bosnian war made a similar impression. “It was very close to Italy, just across the Mediterranean that this horror was happening,” she continues. “So I always wanted to do something with animation to talk against conflicts—especially what kids go through in the middle of war. That became the core idea of the film.” 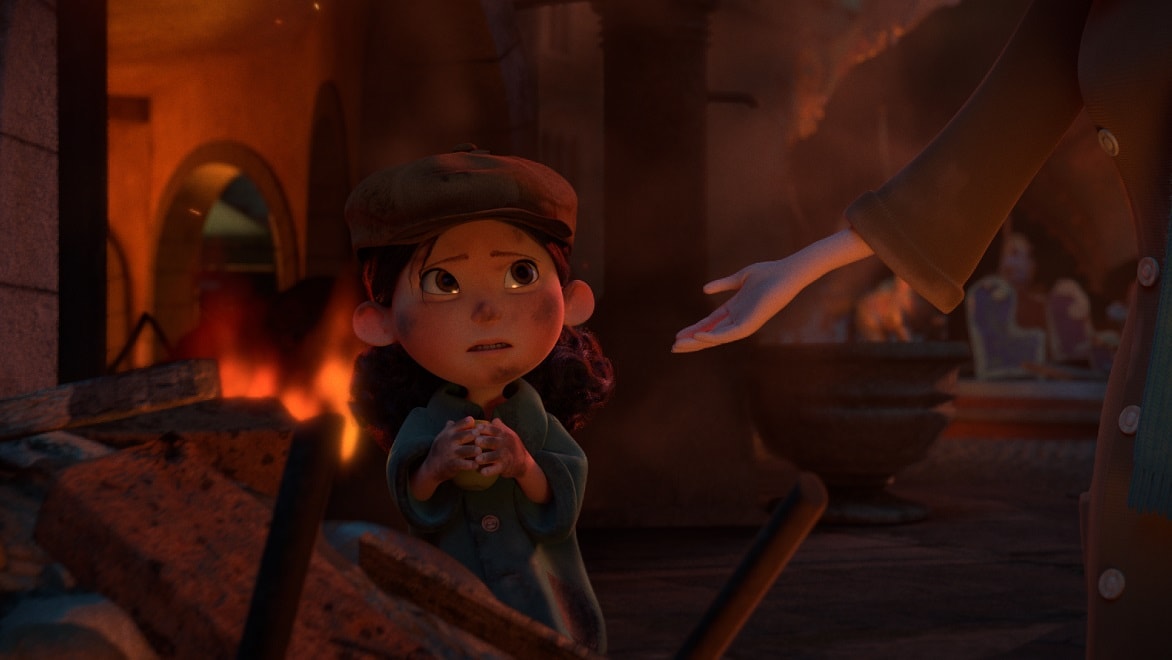 Cinzia Angelini has an ambitious vision

Angelini had nearly two decades’ experience as an animator and story artist, working with major studios including Dreamworks, Disney, and Illumination, when she decided to make Mila in 2009. It was a personal project with a dual purpose: “I also wanted to show that I could direct,” she says. “Back then, being a woman in Hollywood with an accent, wanting to direct—there were not many slots open.”

Mila was created to represent the experience of a child in wartime in a way that transcends language and culture. “People asked me why I did Mila in 3D instead of 2D. I wanted to immerse the audience into the chaos of the bombardments,” Angelini says. “Doing the film in 3D, with no budget, at a high level of quality, has been a crazy ride—because you need many people specialized in various departments, and pipelines that are very responsive.” 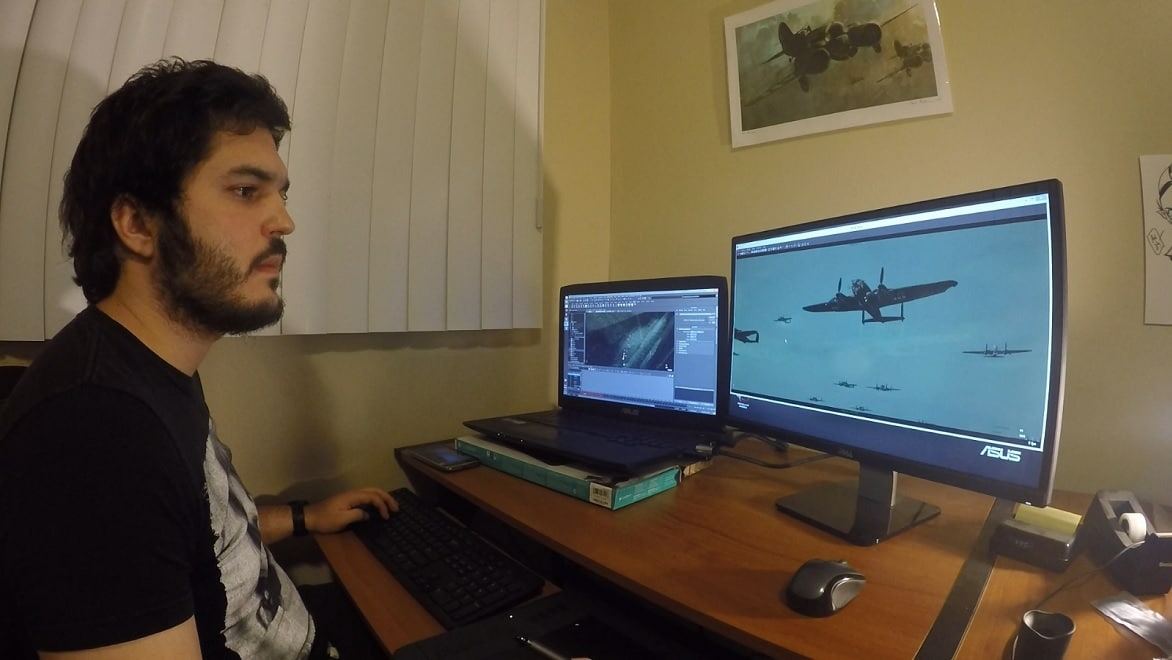 An artist volunteer works on an action scene from Mila. Courtesy of Cinzia Angelini.

As Angelini developed Mila’s story and shared it with colleagues, she found the idea resonated with them. “People started asking me, ‘So, are we doing Mila?’ I said, ‘Well, I don’t have a budget.’ They told me they would work for free.” Through word of mouth—friends and friends of friends—an initial group of 10 artist volunteers eventually expanded to more than 350 people from 35 countries.

“That’s actually a secret of Mila’s success,” Angelini says. “It moved so many hundreds of people to work for free on the project, because it was something that could raise attention to the tragedy of kids in the middle of war. Artists are sensitive people –once they have some free time to dedicate, they want to pick a project that has something to say.”

Tackling an “impossible” challenge with a virtual animation studio

Angelini and her team began the quest to create Mila in 2010. Working with Maya and Arnold, “It became a big project with multiple sets, effects, and close to 300 assets,” she says.

But while recruiting volunteers was easy, managing a global, multilingual team of illustrators, designers, animators, and lighters wasn’t. “Imagine the pipeline across 35 countries, with different hardware and software,” Angelini says. Producer Andrea Emmes joined the project early on to help manage the complexities.

Together, the Mila team formed an independent virtual animation studio—in a time when remote working was still a novelty. They patched together a set of tools for collaboration and communication. “At the beginning, communication was with emails and Skype,” Angelini says. “And we started with a forum that was very ’90s, very clunky and slow.” As they adopted new cloud collaboration tools such as Slack and ShotGrid when they became available, “It was a game-changer,” she says.

But it was difficult to set deadlines with a volunteer crew. “Some people worked on one thing; some did a hundred,” she says. “We learned that when you’re working with volunteers, you have to multiply everything by 10. If someone says they can have something done in a day, it’s going to be 10 days.”

The slow pace also made it a challenge to keep up with technology. The project cycled through software upgrades and the adoption of new and better tools, but then compatibility updates that would take a traditional studio a week set the Mila team back months.

“At the time, we didn’t realize what a crazy and impossible and challenging thing we were doing,” Angelini says. “But it was the only way—we needed the volunteers, and the volunteers were all over the world.” 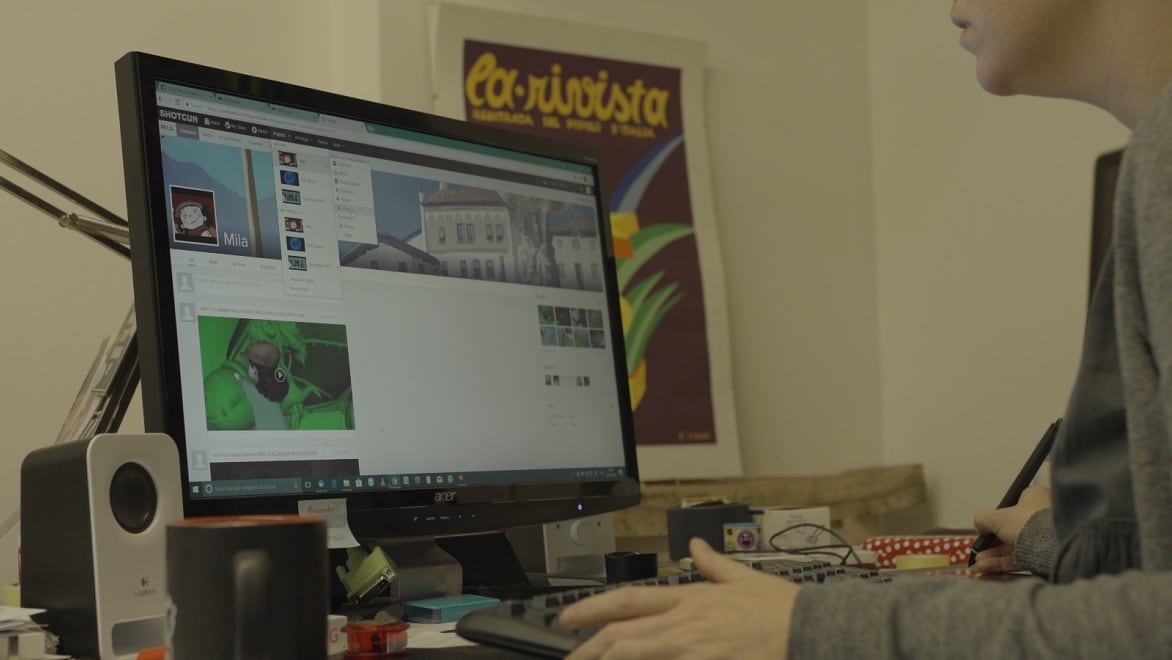 Adopting ShotGrid to manage the complex production was “definitely one of the important steps to help solidify the pipeline,” Angelini says. Courtesy of Cinzia Angelini.

Getting to the finish line

Angelini and the Mila team persisted through logistical and technical challenges, continuing to win support for the film through word of mouth, crowdfunding, and even a TEDx Talk. “So many times, I would open a note from a random stranger sharing a personal story,” Angelini says. “Knowing that people really believed in this project, there was no way I was going to stop.”

Autodesk came on board to support the project in late 2017, providing Maya and Arnold licenses so the global crew could all work with the same software. Using ShotGrid production tracking software, the team created a cloud-based virtual studio to manage the pipeline more efficiently and streamline communications.

Angelini’s full-time employer, Cinesite, offered to help finish Mila during a scheduled gap between major studio productions in 2019. “After 10 years we finally finished Mila in 11 months,” she says. 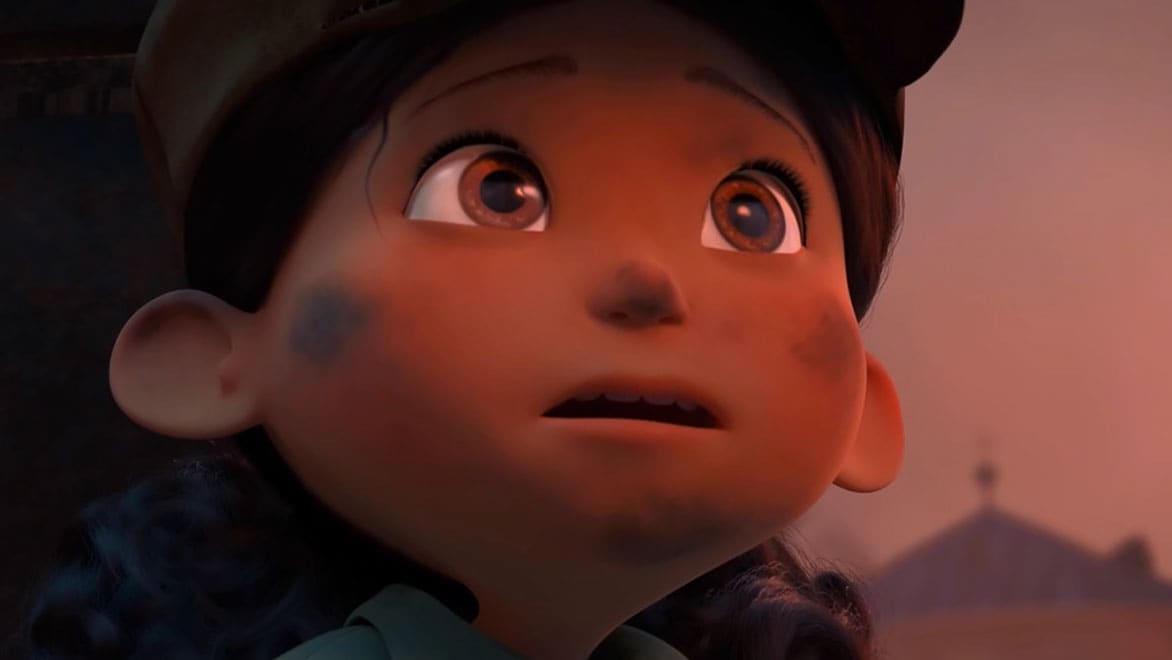 A preview of the film (2:07 min.) depicts Mila's experience as she's caught in the bombing of Trento's town square. Courtesy of Cinzia Angelini.

Audiences respond to a powerful message

Completed in January 2021, Mila is dedicated to the children who continue to suffer the consequences of war. The story follows a little girl who loses her home and family during the bombings of Trento. With the help of a young woman who comes to her rescue, Mila survives the devastation, and her imagination and optimism spark hope for a new life.

Told without dialogue, the film conveys the emotional weight of the story through expressive characters, rich visuals, and music. UNICEF Italia joined 30-plus sponsors to support Mila, citing the “power of the universal language conceived by artists around the world”.

Mila has traveled the film festival circuit in 2021 and 2022, including a homecoming at the Trento Film Festival. Its accolades include more than 30 awards and counting. 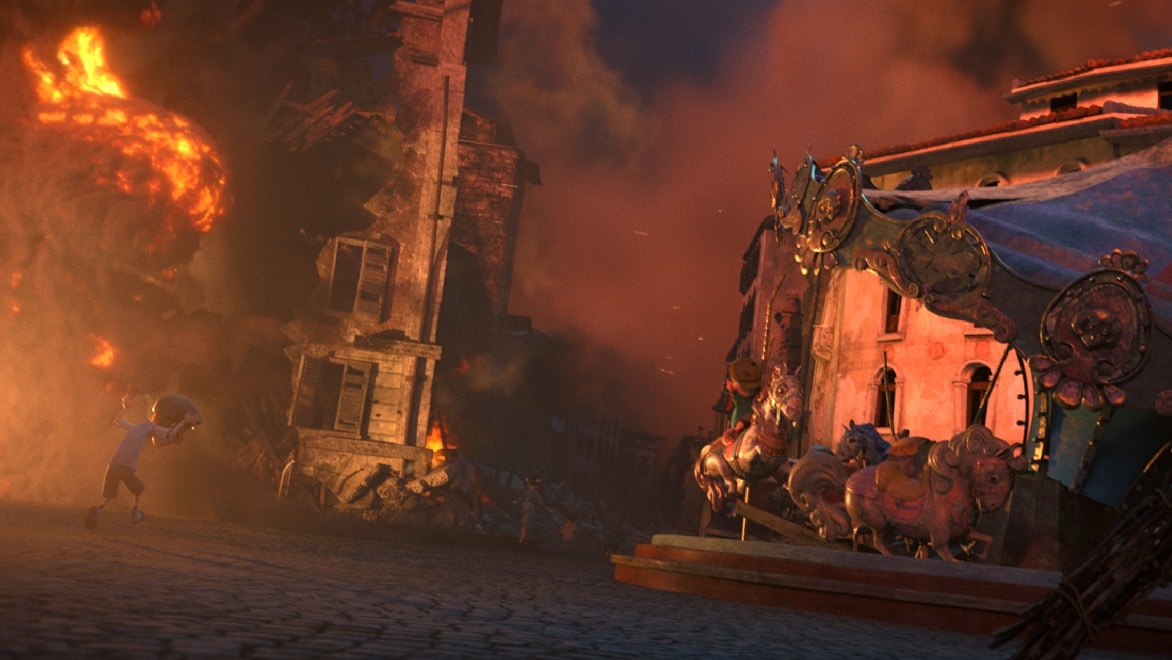 A scene from the film depicting the bombing of Trento’s town square. Courtesy of Cinzia Angelini.

Another big goal of the production was to give back to the volunteer team—helping them learn, network, and get jobs. “Of course, they would get the film credits,” Angelini says. “We also organized mentoring, so the students that joined us could work closely with supervisors who had 15 years’ experience at big studios. And many volunteers with two or three years’ industry experience used their work on Mila to get other jobs. We became like a big funnel.”

The film has also become a turning point in its creator’s career. “It gave me so much, even before it was finished,” Angelini says. “While Cinesite was helping me out with Mila, they asked me to direct their next feature film, the Aniventure production HitPig [with veteran animator David Feiss as co-director]. This is because of Mila—and also because of the experience I gained during these 10 years.” 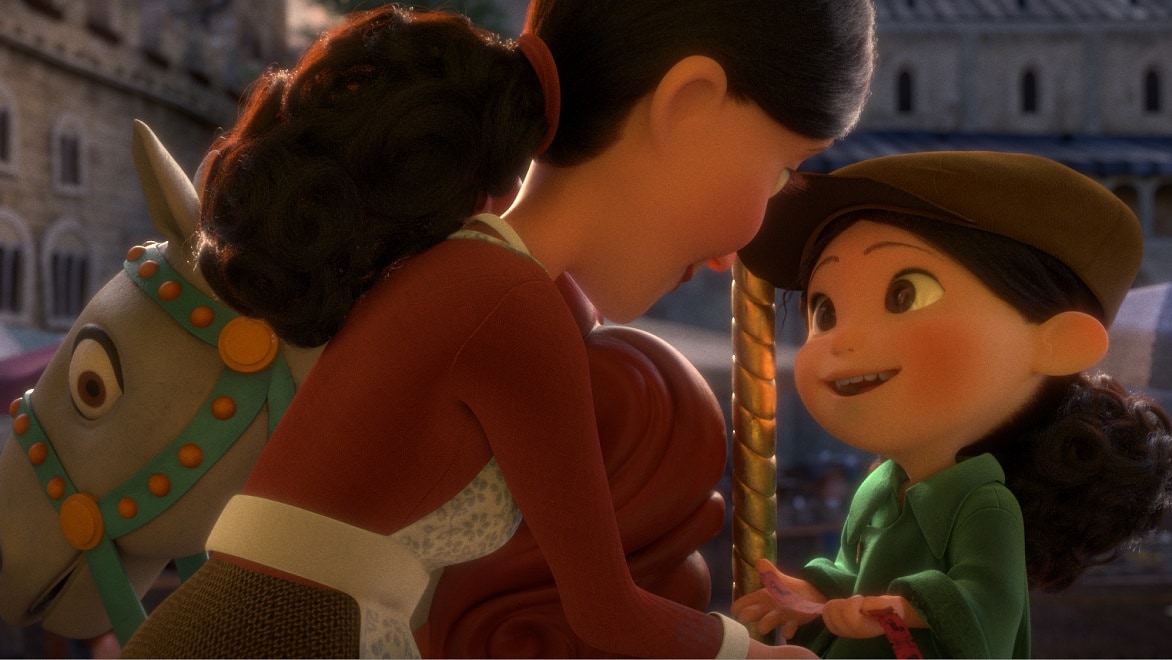 The title character of Mila with her mother in happier times. Image courtesy of Cinzia Angelini.

Now that Mila is complete, Angelini wants to bring the emotional impact of the film to audiences everywhere. “Winning awards is great, of course, but sharing it with as many people as possible is my goal,” she says. “When I started this project, the war in Syria was starting. And now, the Taliban have come back in Afghanistan. It’s human nature to fight each other, but I hope that the next generation will be more sensitive.”

It’s that coming generation that Angelini most wants to reach. “Maybe a kid will see it,” she says. “A future diplomat or politician—somebody who will have to decide whether or not to press the big red button. And maybe they will remember a frame from Mila and think twice.”

Learn about Autodesk’s vision for a cloud-based production ecosystem