Extend your artistry skills and learn the process of creating a captivating film for your architectural project. Step through the entire process to bring your final film to life — from creating an idea, to visualizing it into a storyboard, to creating animated sequences, to editing and post-production. From real‐world applications, you’ll build upon your camera animation techniques, learn more about how the frame rendering process differs from stills, and gain tips and tricks on post‐production. We’ll discuss challenges faced along the way, how to solve these as you go, and how to manage client expectations, all while working within a budget.

The Importance of Planning

If your project has a brand already, ensure you at least in part draw from this as what you are creating is part of an overarching project and it should feel as such. Draw inspiration for your film from the project itself. Is the architecture strong enough to consider drawing elements from it to inspire your film? Or does it require a stronger narrative?

Scripts are the quickest way to get your idea out of your head and into something tangible. You’re best to start off with a simple paragraph or even dot points explaining your overarching idea. This will later be expanded into a presentable script that you’ll use to pitch your idea. Start broad and refine.

You can download sample scripts from the web, or set one up yourself. There is no rule on how you need to set it up. Just remember what you’re using it for, to convince people of your idea, so make sure it’s legible and easy for people to read and understand. My preference is to break it into columns. See the case study script below for an example. It’s broken into three columns, titles, vision, and description. You may want to add a fourth column for audio to help explain your audio intent. 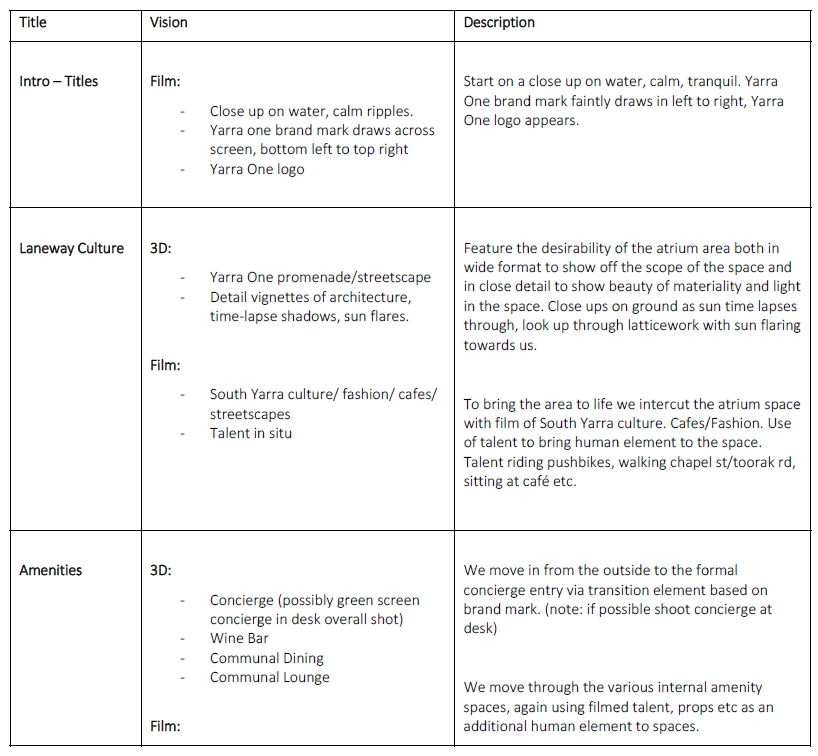 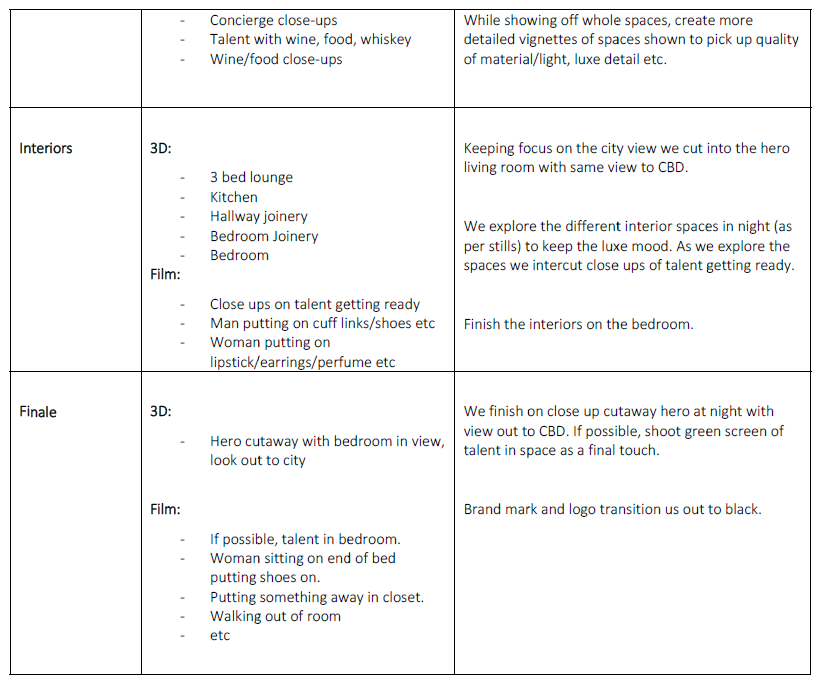 Title — Create broad sections for your film. At the end of the day your film should flow seamlessly into one cohesive vision, however you are going to have sections that need to be covered.

Vision — What you are going to see in each section. Break this down further if required into animated sequences and filmed sequences. This will help your 3D artists and DOPs understand your vision for the screen.

Description — This is the flow of your sequences. How do you envisage each section looking? Your audience should read through this section and be able to form a vision in their head of how your film will look. The more descriptive you can be the easier you should be able to get the vision for your film across.

Audio — This column can be important if you have someone creating custom music for your film and you need to give them an understanding of how you envision the audio working.

Use of talent intercut through 3D footage to give life.

Focus on the detail. Both in film and in 3D, make feature of the detail, light time‐lapse, materiality, etc.

Use brand mark as linking element interspersed throughout film, both through use of light and shadow, architectural detail and graphical overlay to link spaces.

Your storyboard is the visual representation of your script. Generally the two will go hand in hand so that when you present your film, your audience can refer back to both. It’s best to make sure both relate to each other, so use the same sectioning in both, and use a combination of images to help visual explain your idea. At any given point you should be able to refer to a point in your script and relate it to a slide number in your storyboard. 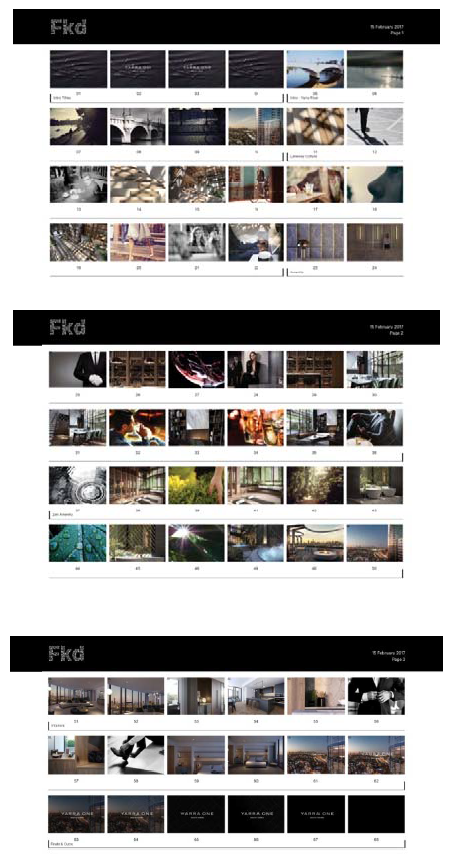 Animatics are an essential tool to working up your film; they are the evolution of your storyboard. Generally you will create multiple animatics through the life of your project and they will evolve to become your final edit.

You should keep yourself in this animatic phase until you have most of your elements signed off. This is especially true for your animated sequences. Try and keep these as low res as possible to make swapping them out or adjusting them quick and easy. At this point you only need to render enough to get your idea across.

Audio should play a big part in your filmmaking. The vision can be as amazing as you’d like but if you don’t have the right sound behind it, your film will suffer. The sound and vision should go hand in hand; they should both play off each other.

There are some great stock music sites around that can be used; however, if you can work with a composer to create something bespoke you will lift your film to a higher level. This allows you more freedom when it comes to timing and editing.

Stock music sites are cheaper and more readily available; you can use multiple tracks and cut them together yourself, however they are not unique and generally don’t have the same complexity as a custom track.

Custom music, on the other hand, will give you far more flexibility. You can craft the music to suit your overall vision and adjust elements to suit your edit; however it’s far more expensive and may be cost prohibitive for some projects.

It’s a good idea to present a few options to your client early in the process to make sure you’re on the same page.

Camera composition is as important in film as it is in stills, and it can be the key to a successful and dynamic film. These are just some of the basic principles to consider, and there are a lot more out there that I would suggest researching to better your understanding of composition and scene breakdown. It may sound cliché, but rules were made to be broken. Just because these (and other) rules exist, that doesn’t mean you always need to abide by them. Use them as guides to set up your cameras.

Leading Lines — Used to draw a viewer’s attention to a specific part of the frame, whether it’s a person, or a vanishing point in the background of the frame.

Framing — Using elements within a scene to frame your subject.

Patterns and Repetition — People are drawn to patterns and repetition and you can use this to find beauty in areas that you may find otherwise bland. Breaking this can add something unexpected that will draw your audience in.

Symmetry — Finding symmetry in your scene can be a powerful way to make a statement piece of your architecture.

Draw inspiration from what is around you. Find what you like from film and television and try and incorporate them into your architectural films. The most successful shots are generally based on real life techniques.

Enhance your shots by adding animated objects to them. This can be done in 3D or post-production. It will help add subtle movement to an otherwise static world. Be subtle with it though as you don’t want to detract from your main subject, namely the building or space.

Curtains blowing in the wind;
Leaves on the ground;
Birds flying in the background;
Lights animating on or off; and
Time‐lapsing sun

As you start to put your film together, start to consider your overall color grading. Making sure your shots sit in the same color tone will give your film a more cohesive look. Consider your rendered content and filmed content together for more seamless integration.

Post-production for animated sequences can be a little trickier than static image post. The files can become heavy and real‐time playback can be near impossible if you’re utilizing a lot of elements, plug-ins, etc. If you have done static image post-production before it’s good to think of your post in the same way, yet try and limit the amount of layers or masks you’re using.

Most post-production work can be done solely using your post-production software of choice, yet if you can afford to you should look around for plug-ins that can assist. They can greatly enhance your production and speed up your workflow.

As with stills production, use as many render elements as you deem necessary. You may not use them all and you can always delete to clear up hard drive space if you don’t use them, however it’s better to have and not to need than the alternative.

Popular elements to consider include reflection, refraction, lighting, shadows, Z-Depth, and Multimatte ID (uses R, G, and B channels as masks to be able to adjust individual objects). Consider what you might want to use before starting to render. This will save hard drive space.

The editing process is key to the success of your film. Your visuals could be amazing, but without well considered editing you can easily lose your audience. Keep your editing sharp. If you’re trying to edit to the beat, ensure you hit it exactly otherwise everything will seem out of time. You don’t need to edit to the beat, however this is a good way to go. You may just edit key moments to the beat which can be a stronger statement.

Before joining FKD in 2015, Ben Rappell was an instructor at the Autodesk accredited MAD Academy in South Australia between 2008 and 2010 and at FloodSlicer as an associate director between 2010 and 2015. During his time at MAD Academy, he instructed architects and designers in creating photorealistic imagery through Autodesk accredited courseware. He has both worked on and managed many high profile architectural projects both in Australia and internationally. Ben was a lead artist on the Imagina Award-winning entry Now and When for the 2010 Venice Architecture Biennale as well as multiple CG Architect Award-nominated projects. Since then he has gone on to help start-up FKD Studio and spearhead their film team.