READY TO MAKE ANYTHING

The major benefit of adopting Autodesk Fusion 360 is the ability to create exoskeletons as good as any in the world, and all in-house. In the three years since shifting to Autodesk Fusion 360, the NODUS team haven’t had to produce a single production element for the sake of real-life testing. New product iterations are tested digitally, saving time and resources. 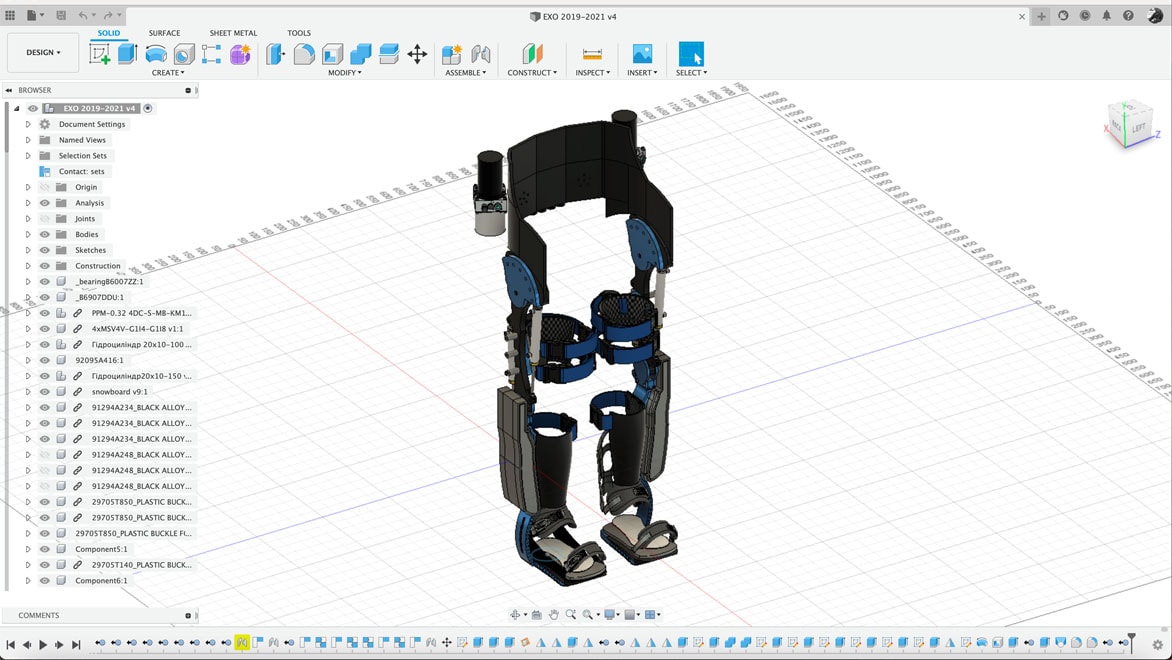 Exoskeleton made by Nodus, Autodesk Fusion 360. Image courtesy of Nodus.

For over 20 years, NODUS — a neurosurgery and neurorehabilitation clinic in Ukraine — has helped rehabilitate patients that have suffered trauma or vascular disorders. Even after extensive treatment, for some patients, regaining one’s full motor functions is a challenge. In such cases, an exoskeleton comprising an external structure and moving parts can help patients increase muscle strength and latitude of movement, thus improving their quality of life. “In this age of advanced technological possibility, it is inhumane to simply consign a person that has lost mobility to a wheelchair for life,” says Oleksandr Kulyk, MD, СEO of NODUS.

Exoskeleton models have been on the world market for some time, but their price tag of €60-70,000 makes them prohibitively expensive for most patients at NODUS. To address this problem, Oleksandr Kulyk set a task for specialists at the clinic: to create their own exoskeleton which is affordable but still offers all the necessary features.

To create the exoskeleton, a small design and production line were established at the clinic. The team’s design drew on the clinic’s expertise in neurofunctional diagnostic and extensive experience in creating orthotic devices.

For the first iteration of the exoskeleton, made in 2014, AutoCAD was used as the main design software. “The problem was that the design team was staffed by engineers, not doctors,” says Oleksandr Kulyk. “Many of them were self-taught in сomputer aided design. Unfortunately, AutoCAD was not a convenient tool for communication between the design team and clinical experts.”

As the project gradually evolved, the clinic developed new iterations of the exoskeleton, starting with mechanical models and then progressing to hydro-mechanic, electronic, and bionic. NODUS signed contracts with manufacturers and experimented with different materials such as aluminum and titanium.

Sixteen years later, NODUS’ management decided to overhaul their approach to developing exoskeletons, adopting tools that would make it convenient and easy for the doctors themselves to understand the 3D-modelling.  “We needed a solution that allowed continuity with AutoCAD so we could work with our previous designs, while also making it possible to quickly build and calculate 3D-models,” says Oleksandr Kulyk. Before, most issues were addressed by engineers during extensive field testing. Now, the clinics’ management wanted to move forward faster by tracking and calculate multiple parameters in a 3D model so that unworkable solutions could be rejected immediately.

In adapting the design approach, it was necessary to take into account the complexity of the product, such as the large number of design elements that cannot be calculated by eye alone. “The exoskeleton contains many different components and nodes,” says Oleksandr Kulyk. “We need to calculate how many working cycles each node would maintain, and test qualities such as wear resistance, durability, and ability to accommodate the physiology of movement.” In particular, Kulyk cites the ankle joint as the most complicated part of the exoskeleton to 3D-model. 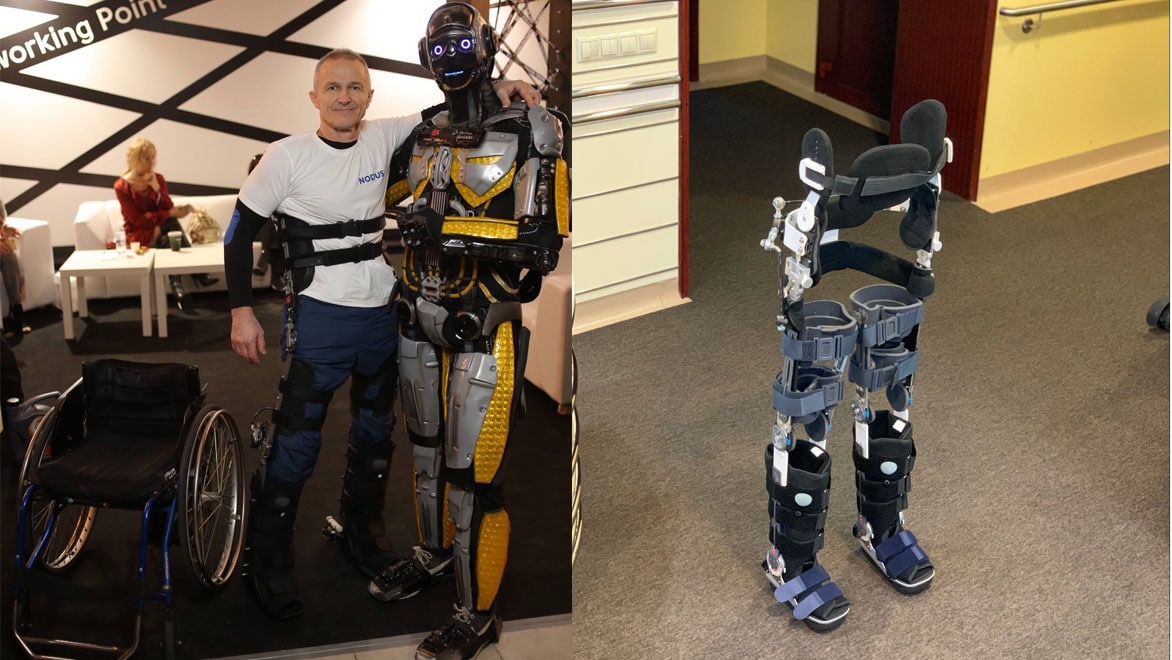 Exoskeleton made by Nodus. Photo courtesy of Nodus.

“The nodes” of tasks

Kulyk said that NODUS struggled to find an optimal solution for the ankle joint node for almost two years. Ten physical samples were produced and underwent real-life field tests for issues such as bending and rupturing. With each new iteration, the node became more mechanized. However, the specialists failed to arrive at the optimal design.

“The foot cannot move freely in all planes, allowing it to deal with uneven surfaces,” says the expert. “We wanted to create an analogue which would not only bend/unbend in one plane, but also withstand lateral rolling. Another important factor is that if, for example, a limb is absent, the space inside the prosthetic can be used for various motors, nodes and components. But our patients retain their limbs, so supplementing them with external devices can result in structures that are un-ergonomic, while the added mass means they are not gravitationally optimized. At some point, it became clear that without 3D modeling and simulation, it was too time-consuming and expensive to try and devise solutions for such complex and multifaceted tasks.”

In 2018, NODUS’ management decided to introduce Autodesk Fusion 360 into the in-house design team’s workflow. The first reason for this choice of software was Autodesk Fusion 360’s compatibility with AutoCAD, as well it being easy to learn. “For us doctors, the software turned out to be intuitive and adaptive, and we were quickly able to master it,” says Oleksandr Kulyk. “In addition, the program allowed us to work with 3D-scans (the clinic already had a biological 3D-scanner, allowing doctors to scan different body parts and use data to create customized orthotic devices). In future, spline models obtained through 3D-scans can be transferred to Fusion 360 to accurately model individual exoskeletons. As they worked on various projects, the NODUS team noted that Fusion 360 also had several other advantages.

All nodes can be modeled “in one window,” within a single model. “By changing one component, we can see how this change affects all other elements of the assembly,” says Oleksandr Kulyk. “For example, working on one of the new iterations of the exoskeleton, we changed the location of the battery. Fusion 360 allowed us to see how this shifted the exoskeleton’s center of gravity. Further calculations showed that to fix the center of gravity in the desired spot, we needed to bring the battery down by 7 mm. With all updates displayed in the consolidated model, adjustments to the location of the battery slot immediately change the configuration of other components. Further analyzing the model, we saw that the existing assembly did not provide enough space to tighten the bolts. So to move the battery slots down by 7 mm, we had to completely change the configuration of other nodes.”

Observing collisions and overlaps between nodes. Kulyk emphasized the importance of accurately modeling movable nodes, such as the hip joint node. “There are many small details in these components, and tolerance of even a half-millimeter can create a problem,” he notes. “The evaluation tools in Fusion 360 allowed us to identify any potential collisions and necessary adjustments to the model.”

Simulating electromechanical processes. This was another task the NODUS team faced while working on the hip joint. The node contained a stopping

mechanism that restricted the angle of movement in the joint to a maximum of 60 degrees. The team used Fusion 360 to simulate this configuration with the current cut off, resulting in lost voltage from the fixing clamps. The designers needed to achieve stability and create a locking mechanism that would allow the person to remain standing upright. Fusion 360 allowed them to do this.

Calculating workloads for the usage of different materials. The search for cheaper but reliable and durable materials was a constant task for the design team. “For example, once we had an idea to replace a pricey titanium component with a cheaper carbon one,” remembers Oleksandr Kulyk. “But after using Fusion 360 to conduct a detailed modeling and simulation, we saw that with the component would not be safe enough at the existing thickness. It was impossible to increase the thickness of the component, as the model made it clear that collisions would occur if that was done. So, we opted to go back to titanium.”

Visibility. “Thanks to Fusion 360, it is much easier for us to explain to the patients and their relatives exactly what we are doing and what results we expect,” says Oleksandr Kulyk. “3D format is a universal language we can easily communicate in.”

Teamwork through the cloud. Specialists from different countries are involved in the development of exoskeletons. For example, orthopedists from the United States participated in work on the knee joint. NODUS experts found collaboration with this distributed team was very easy in Fusion 360.

Compatibility with various equipment for 3D. In the office, the design team displays the model on a graphic HP workstation and use various professional instruments to work on the model such as additional graphic displays and 3D-connection manipulators. At the production site, designers and craftsmen interact using tablets with

In the three years since shifting to Autodesk Fusion 360, the NODUS team haven’t had to produce a single production element for the sake of real-life testing. New product iterations are tested digitally, saving time and resources. “However, the major benefit of adopting Autodesk Fusion 360 is the ability to create exoskeletons as good as any in the world, and all in-house,” Oleksandr Kulyk summarizes. “They cost half the price of foreign alternatives and the quality is just as high. Our latest exoskeleton model can maintain power for up to four hours and is currently undergoing clinical trials. Our latest plan is to release 20 samples of the model. We hope that very soon we will be able to see people walking on the streets of Kyiv with the help of our exoskeletons.»