Autodesk Fusion 360 enables the transformation of Kyiv delivery service Delfast into a manufacturer of cutting-edge electric bicycles. An electric bicycle is basically a computer on wheels. This type of transport perfectly fits into the modern digital economy infrastructure.. 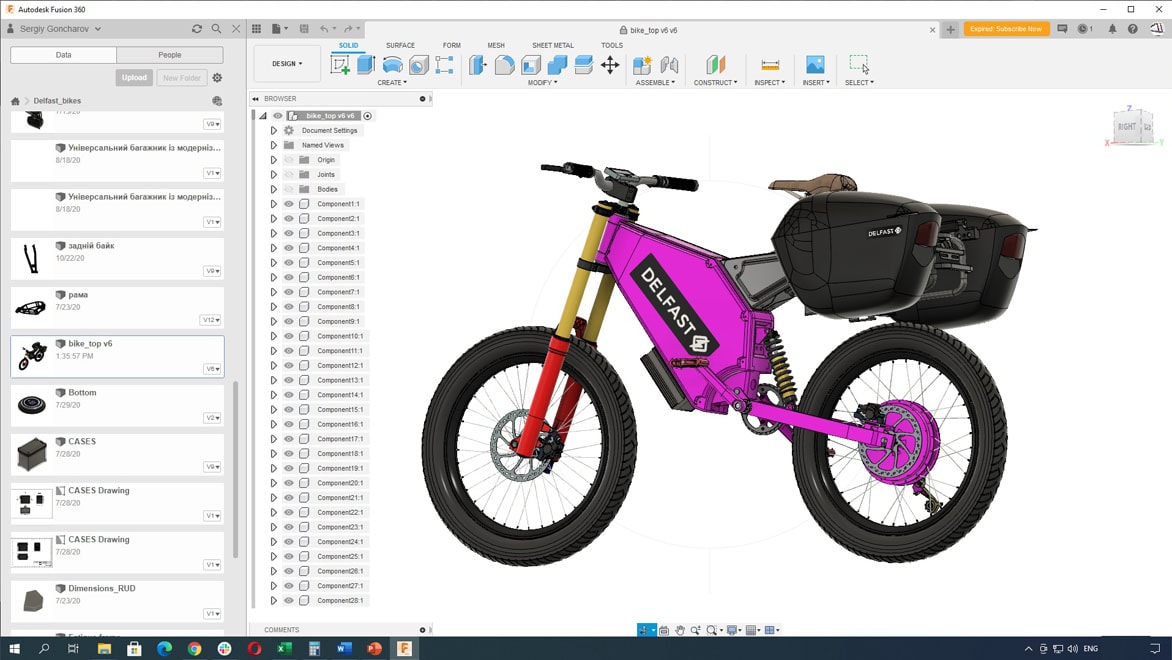 Delfast was established as an express delivery service operating in Kyiv. In the beginning, one of the key tasks for its founders was to find the optimal vehicle that would allow couriers to deliver small parcels around the city within one hour. At first glance, only two options seemed suitable — motorcycles or bicycles.

But motorcycles are expensive and bicycles demanded that couriers be in good physical shape — not all of them could pedal all day long. So, the entrepreneurs developed the idea of equipping their delivery team with electric bikes — which turned out to be the first step of Delfast’s transition to becoming a manufacturer of cutting-edge electric bicycles.

When trying to source electric bikes for their couriers, Delfast faced a problem. The performance characteristics claimed by manufacturers did not always match reality. Bikes operating on lead-acid batteries had a range of 25-30 kilometers on one charge, instead of the claimed 80. The bikes also broke easily, with frames the most fragile part. Instead of fighting with the suppliers, Delfast decided to design their own bike frames, fixing all of the major bugs. In the process, Delfast designers created not only frames, but a whole new model of electric bicycle, which significantly outperformed all others on the market. Even in its first iteration, the bike achieved stable speeds of 45 km/hr and a 120 km range on one battery charge. The model immediately became a customers’ favorite and over the following years, Delfast received many purchase requests, thus giving birth to Delfast’s venture to produce their own electric bicycles.

“An electric bicycle is basically a computer on wheels. This type of transport perfectly fits into the modern digital economy infrastructure.” 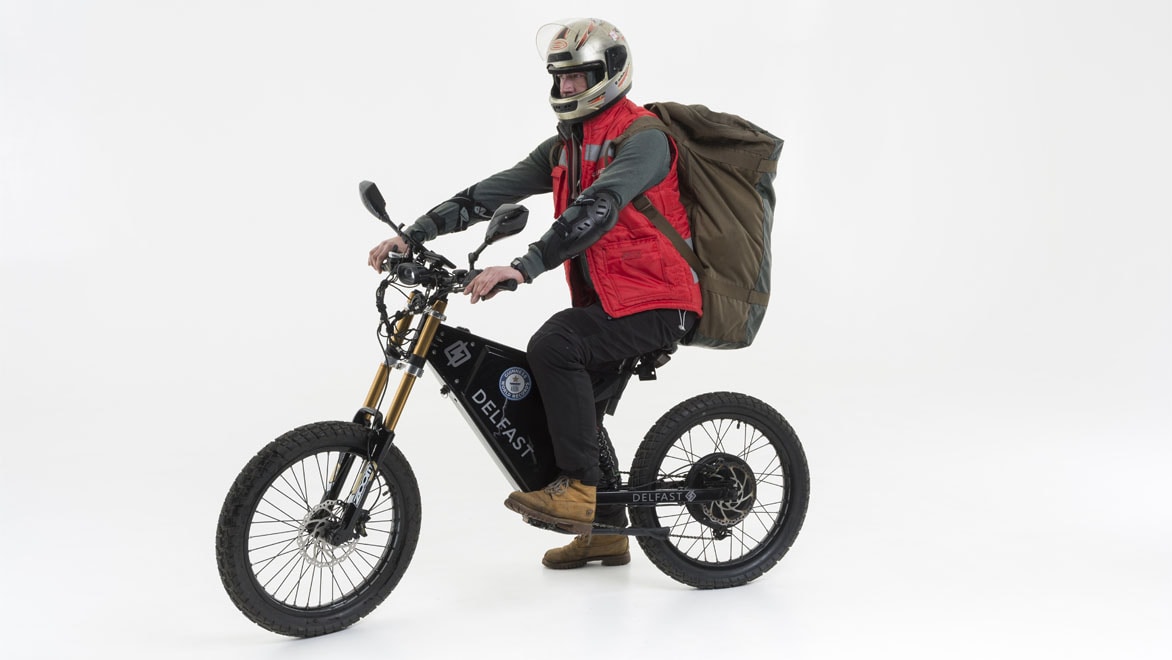 “Millions of vehicles carry millions of liters of gas ‘just in case.’ Electric transport is more like ‘a battery unto itself’ – the movement of electrons drives the movement of the engine,” says Sergey Goncharov. “Routes and speeds are easily programmed and can be 100% controlled by any digital network. The controller software is the most complicated part of the manufacturing process for an electric bike. It determines how ‘smart’ this ‘smartphone on wheels’ will really be”.

To create the prototype, Delfast established its own design team and recruited the best electrical engineers. At first they worked in SolidWorks but very quickly transitioned to Autodesk Fusion 360. This is because it was necessary to simultaneously work on multiple tasks in a single virtual environment. One set of specialists would create wiring diagrams, another set handled controllers, the third set worked on the electric motor, while a fourth set calculated how the electric components would affect the suspension, and so on. “SolidWorks has features that can solve these problems,” says Sergey Goncharov. “But its toolbox is excessive, more suitable for mass production and large design teams. Autodesk Fusion 360 is just right for us. It’s easy to get grips with, allowing us to concentrate almost all model creation circles in one window.”

Since 2019, Delfast has embedded its R&D process in Autodesk Fusion 360, developing six iterations of electric bicycles through the end of 2020.

Delfast’s bike design team is spread out over a wide geography, including former aerospace engineers in Ukraine, and electronic controller specialists and guest industrial designers based in Germany. Autodesk Fusion 360 provides a shared cloud environment for the whole group to collaborate in. Specialists in Germany create models which designers in Kiev can then modify online or offline via browser windows in desktop mode.

With the help of Autodesk Fusion 360, Delfast was able to virtually eliminate the prototyping stage from its R&D process. Previously, sourcing and creating parts took a lot of time. During tests, parts often broke or burnt out. Now, each part can be designed and tested in a virtual space, and be 3D-printed if needed. In this way, matrix molds can be designed and then immediately transferred to the milling machine to be сut in foam, MDF or other material.

Fusion 360 makes preparation for 3D-printing quick and easy. For example, a small design change to a plastic part can be done in around four hours. At 2 pm, specialists set up the parameters in the program, and by 6 pm the 3D-printed part is ready. Early the next morning, specialists mount the part on the electric bicycle and it’s ready to function.

Delfast uses 3D-printing for more than just designing prototypes. In the near future, they plan to set up small production lines for plastic bike parts. This will be cheaper than milling them or ordering from third-party manufacturers.

“For some time, we could not solve one particular problem in real-life field tests,” remembers Sergey Goncharov. “In one model of electric bicycle, the suspension kept breaking the frame. We created a 3D-simulation of the elastic element in Fusion 360, changing the load and mounting angle. It became clear that before the frame had been tightly clamping the shock absorber, making it act like a lever, whereas it should have been free to spin.”

Static and dynamic loads for suspension mounts — saddle and trunk — are also simulated in the virtual space. Usually, the specialist sets up a simulation of 60,000 usage cycles with a 120 kilo load (driver, passenger, parcel). “In the beginning, our specialists didn’t fully trust virtual simulations and produced physical samples based on 3D-models,” says Sergey Goncharov. “For example, they created a trunk and made the courier sit on it. But as it almost never broke, and we realized that the accuracy of virtual simulations is over 80%, so we decided to give up on physical iterations." 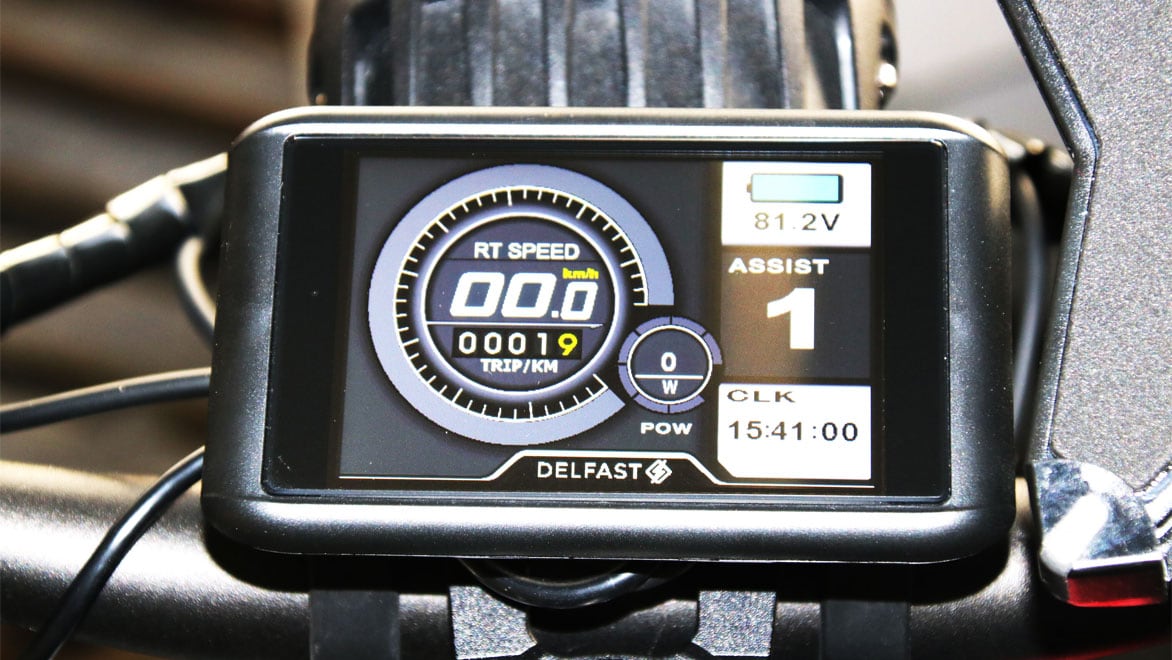 In general, after Delfast transitioned to Autodesk Fusion 360, the production cycle for one electric bike decreased from one year to three months. Current Delfast models can reach speeds of 80 km/hr, weight 60 kg, and run for 250 km on one battery charge. To ensure safety at these high speeds, the bikes are certified according to relevant UN standards, with quality brakes and approved indicators mandatory. Safety is also tested through Fusion 360 simulations. For example, the software can simulate bike performance on dry roads at specific parameters. These parameters can be as precise as bike weight, type of motor, torque, kind of tires and particular speed. Based on this detailed simulation, the software accurately calculates the required braking force.

Delfast is highly responsive to audience requests and market trends. Renders created in Fusion 360 allow the company to promote its products on (social) media and effectively collect customer feedback, providing a basis to improve each model. For example, more users started reporting going “off-road” on Delfast bikes. For off-road performance, high torque is more important than speed, an issue that has been addressed in a forthcoming model.

It also became clear that users tend not to pedal when using electric bikes, meaning that the chai (not part of the transmission) is susceptible to rust and deteriorate. This issue has also been taken into account. Instead of a chain drive, the new model features a new Carbon Dry belt. For future Delfast models, the key aim is definitely to increase range, power and speed. To realize these goals, Delfast’s experts will rely on Fusion 360 3D-space to work on optimizing motor and battery performance.