More than eight million metric tons of plastic debris—bags, bottles, packaging, and more—are washed into the oceans each year, according to the journal Science. To increase awareness of this pollution crisis and help people understand the impact on marine life, five students at MoPA Computer Graphics Animation School in Arles, France created a 3D-animated short film, Hybrids. The film depicts a stunning ocean world that imagines how sea creatures might adapt to the polluted environment. Hybrids has won over audiences and earned numerous awards—and helped all five team members launch careers in the visual-effects industry.

A student project with an environmental focus

As students at MoPA, the five co-directors of Hybrids had committed to a rigorous five-year program studying the art and technology of computer graphics and animation. For their final graduation project, Florian Brauch, Matthieu Pujol, Kim Tailhades, Yohan Thireau, and Romain Thirion teamed up around their complementary skills and interests to create a short film. “Each one of us had his or her own strong fields,” Pujol says. “Florian was the animator, for instance, and I was the effects artist. We had a lighter [Tailhades], a compositing artist [Thirion], and an animator and rigger as well [Thireau].”

The students quickly identified a compelling topic to showcase in their graduate film. “Four of us grew up by the sea, and it was why we chose the pollution issue,” Brauch says. “The idea came from Romain, who’s from Cannes in the south of France. He used to dive to gaze at the underwater animals. As time went by, he noticed less and less fish and more and more trash. Every time he would spot something shiny buried in the sand, thinking it was some interesting form of life, it turned out to be a bottle cap instead.” 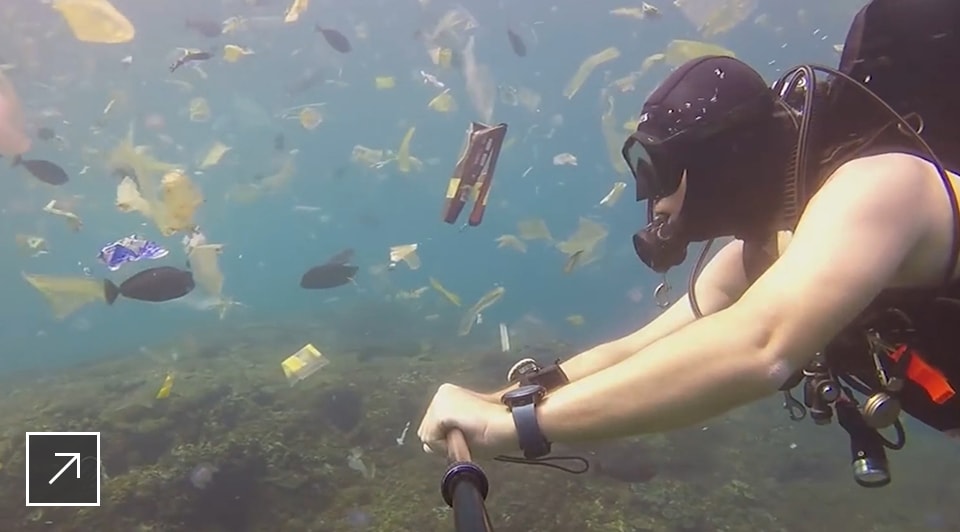 The inspiration for Hybrids was team member Romain Thirion’s dismay at seeing the increasing amount of trash in the water when diving. Courtesy of www.hybrids-shortfilm.com.

After identifying the environmental theme, the team started thinking about concepts. “We had the crazy idea about hybridization between the animals in the ocean and the trash that we’re leaving there,” Pujol says. The team wanted to portray many different kinds of sea creatures as well as play with scale—tiny animals and huge ones, sometimes both in the same shot.

With the goal of increasing audience awareness about pollution, the undersea environment the team portrayed “had to be as realistic as possible—to make sure the audience connects to the film and feels the urgency,” Brauch says. And because this was a school project with just nine months to produce the entire movie—and with seven other student teams also working on the same deadline and using the same resources—“we knew from the beginning that we needed to be really, really organized and manage our time very efficiently,” Pujol says. 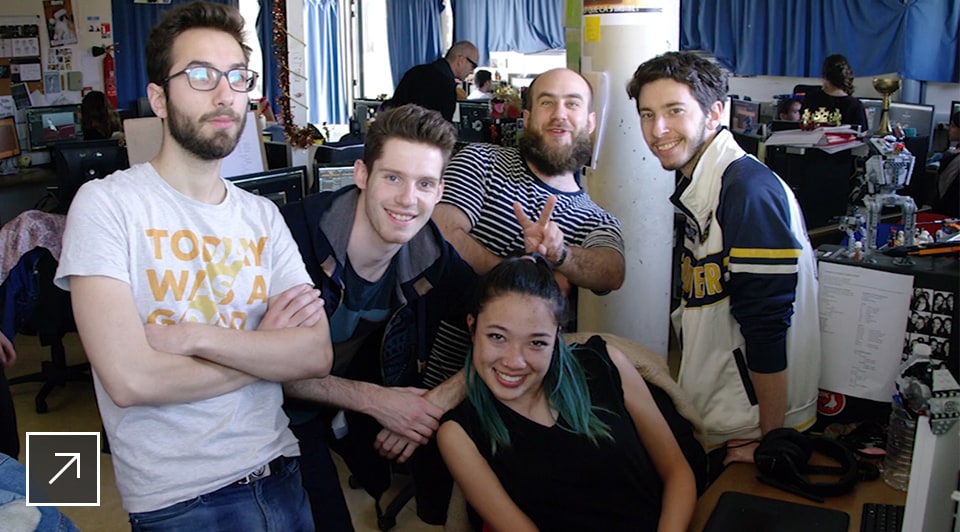 Once the team members settled on the idea of hybrids, they began developing the film’s cast of characters. “We started with some of the most iconic underwater creatures,” Pujol says. For each character—shark, grouper, crabs, turtle, vulture—team members found a specific personality and matched it to trash that would help it adapt to survive. The grouper, for example, was hybridized with an oil drum merged into its bulky, rounded shape.

Once the designs were established, the team sculpted 3D versions of the characters in ZBrush, then used Maya to rig and animate them. The creatures were textured with Substance Painter to blend flesh with nonorganic objects. “We wanted to show the pain and suffering in that—something that’s far from a fairy tale,” Pujol explains. “It was all about texturing.” Iterating quickly, the team then tried various character interactions: grouper attacking turtle, shark attacking turtle. To find the flow for the movie, they realized they had to go into previsualization quickly. “We needed to be able to see the movie, to feel the timing, the framing of all the shots, the animation, to make sure that it was working,” he says. 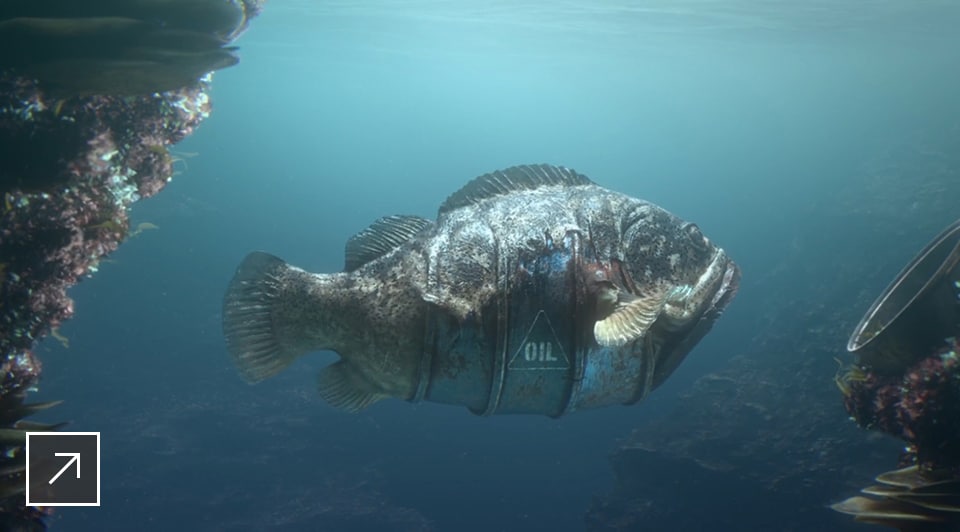 The metal of an oil barrel blends with the flesh of a grouper to form a sea creature that’s evolved as a hybrid between animal and ocean debris. Courtesy of www.hybrids-shortfilm.com.

What makes the vision of Hybrids believable is the team’s focus on creating an ocean world that feels real. They did extensive testing on animation, effects, and character interactions to make it look more natural, and they learned to compensate for underwater weight and gravity to enhance the danger of the action scenes. “Almost all the film is underwater, and it changes everything,” Brauch says. “We had to adapt the animation, the lighting, the way we were doing the FX and the compositing. It’s almost as if we had to learn everything again.”

The sequences of the film show the characters moving from different environments—mosses to sandy ground to trash fields, getting more polluted along the way. The team used Houdini to generate environments and effects, rendered everything in Arnold for Maya, and did the compositing with Nuke. Every sequence of Hybrids blends specific lighting, color, environment, and mood to heighten the emotion. “Going from something more naturalistic to something more theatrical or dramatic was our way to tell the story and push the viewer to reflection,” Brauch says. 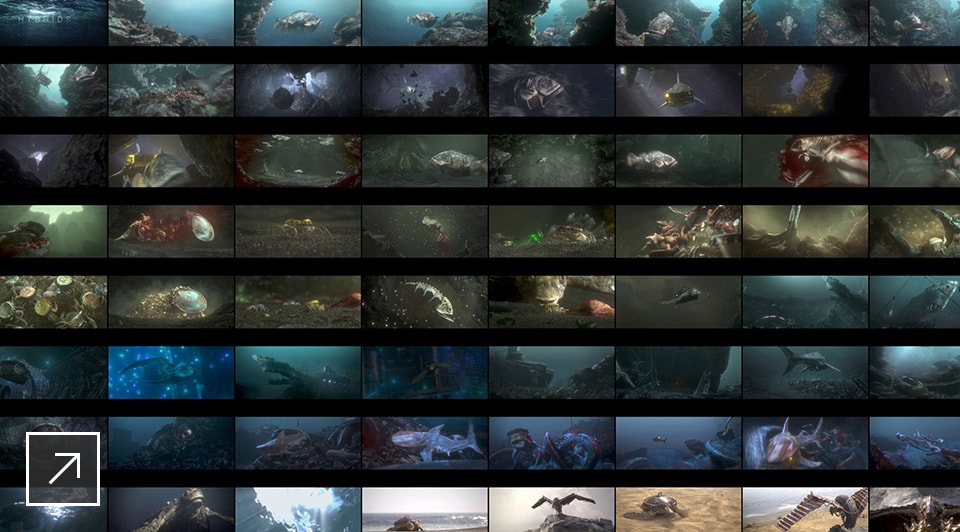 Seen together, all the sequences of the film show a progression of light, color, and mood that reflects the drama of the story. Courtesy of www.hybrids-shortfilm.com.

Early on in production, the members of the Hybrids team realized they had too many ideas and too little time. After bringing their ideas together in storyboards, “we wanted to try everything quickly to know if it was doable or not,” Brauch says. Tests and R&D helped merge and shape ideas, and the team rapidly switched to 3D previsualization to lock in the key moments of the film. The goal was to avoid redoing the same shots and sequences multiple times.

“Pipeline-wise, we wanted to be able to iterate very quickly,” Pujol says. “Maya and Arnold were very efficient in rendering what we needed for the water environment. Arnold’s .ass file format helped us import assets from Houdini to Maya in a seamless way. Then it was just a matter of compositing and editing after that.” Each day, the team reviewed dailies knowing that “we didn't have the luxury of time to waste on something that won’t make the cut.” The students also learned to be smart with hardware resources to avoid long render times because they were sharing the same computers as seven other MoPA teams on the same deadline. 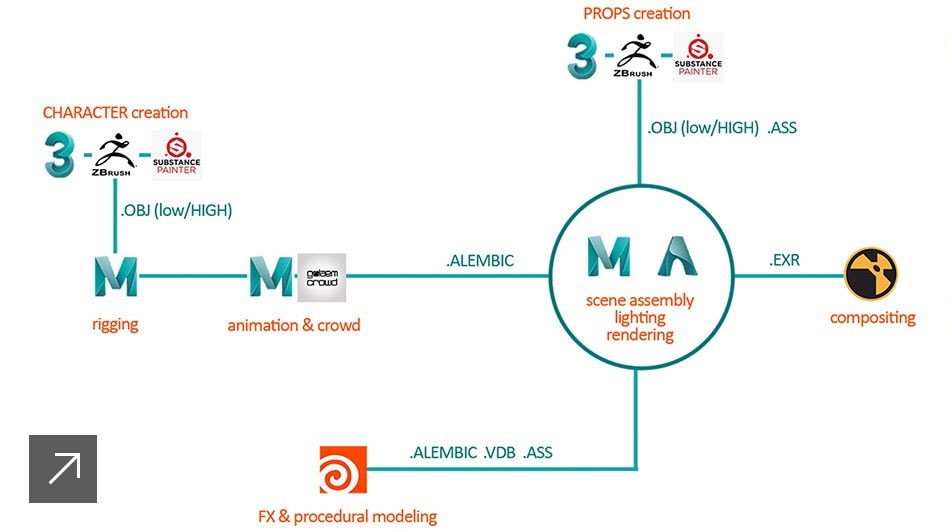 The team’s pipeline blended different tools and techniques to be more efficient on a short timeline. Courtesy of www.hybrids-shortfilm.com.

After mastering the film’s tight schedule and successfully completing Hybrids, the team got schooled in another aspect of moviemaking: film distribution. “We had no experience with promoting a short film,” Pujol says. “But we were lucky. Our school had a contract with a distributor that took the film to festivals and TV buyers. We think it’s a necessity to have one: Submitting a short film to festivals takes a lot of time.”

The film has been screened at 97 film festivals worldwide, with Hybrids winning 30 awards—including Best in Show at SIGGRAPH 2018 and Best Environmental Film at the 2018 Interfilm Berlin International Short Film Festival. With a win at the Sitges Film Festival in Spain, Hybrids became eligible for the 91st Academy Awards in the category of Best Animated Short Film. In addition, the film has been acquired for broadcast on French public television.

The audience reception has also been rewarding: “They responded even better than we expected,” Pujol says. “We get a lot of emails from divers who tell us that they connected with our film. We’re so happy that the film is making people aware of ocean pollution.” 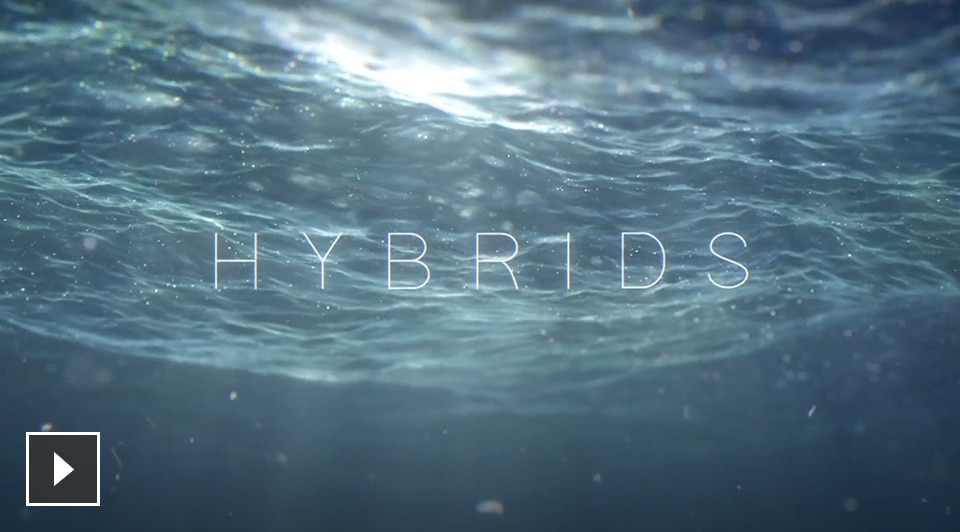 Building careers in the visual-effects industry

In addition to winning over audiences, Hybrids has also helped the team members grow their professional networks and launch their careers. “The film was our graduation project, but we learned so much after that, taking it to festivals,” Brauch says. When the film became Oscars-eligible, their connections from MoPA and festivals helped the film become part of an animation showcase that was screened at major studios such as Disney, Framestore, MPC, DreamWorks, Blizzard, and more. In the end, Hybrids didn’t make the Oscars cut, but “it was a lot of fun because we learned from scratch how to promote a film,” he adds.

Today, each member of the team is employed in the industry. In Montreal, Pujol is doing effects at DNEG, and Brauch is an animator at Framestore. Thirion is in London working as a concept artist for Electric Theatre Collective. In Paris, Tailhades is working on environment and rendering for games at Unit Image, and Thireau is working on a feature animation film at Prima Linea Productions. “We learned that in the end, if you’re passionate about what you do, people will listen to you,” Brauch says. 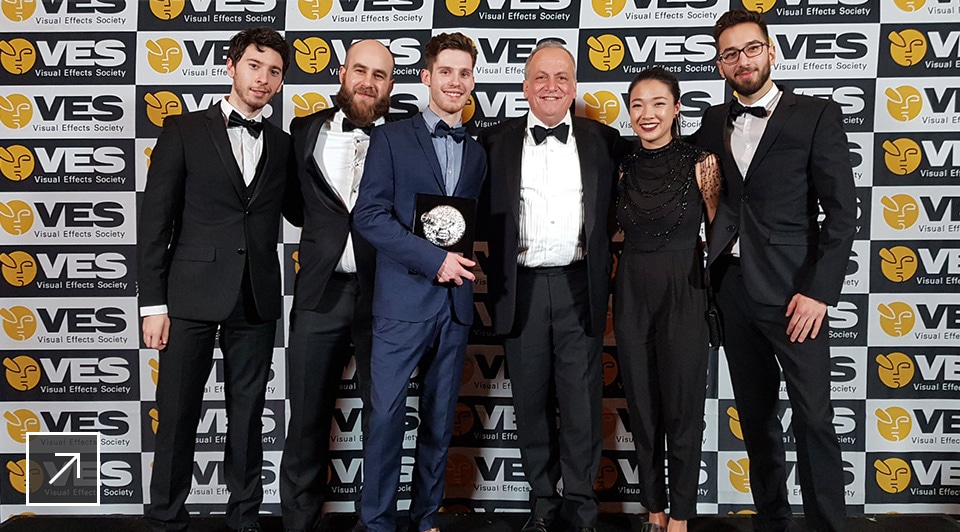 The Hybrids team (pictured with four-time Visual Effects Oscar-winner Joe Letteri, center right) after winning the award for Outstanding Visual Effects in a Student Project at the 2018 VES Awards of the Visuals Effects Society. Courtesy of www.hybrids-shortfilm.com.

Find out more about Hybrids student film
Read how Arnold helped bring Hybrids to life
Interested in a career in film or gaming? Learn about The Rookies awards and mentor platform