Mapping the places nobody wants to go with reality capture

THE FUTURE OF MAKING

ATFF is a French reality-capture firm that surveys some of Europe’s most challenging locales—nuclear sites, autonomous industrial utilities, military installations, and other extreme and perilous environments. The company uses the latest reality-capture hardware and software to deliver the smallest details, in the form of point clouds, to reproduce these sites with 3D BIM (Building Information Modeling) models showing accurate conditions on the ground, above, and below. Reality capture makes ATFF’s task of site surveying faster and more precise so the company can provide more useful results to its clients.

A better way to survey

Founded in 2014 and based in Annecy, France, ATFF specializes in reality capture for architecture and construction, heritage sites, and industrial facilities. The firm’s expertise encompasses the platforms, software, and hardware that gather and organize layers of data representing the natural and built world. It’s a step toward perfect fidelity between the physical world and the data used to represent it—many dimensions more accurate than antiquated conventional surveying.

In fact, ATFF’s cofounder Florian Fauconnet says he sees the world as a point cloud: millions of points fixed in space that can be translated into detailed 3D models of objects and landscapes. A typical site scan can produce between 40 and 150 million data points, which are converted into point clouds with ReCap reality-capture software. These point clouds are then used with BIM platforms such as Revit and Navisworks to create precise 3D models of the site. 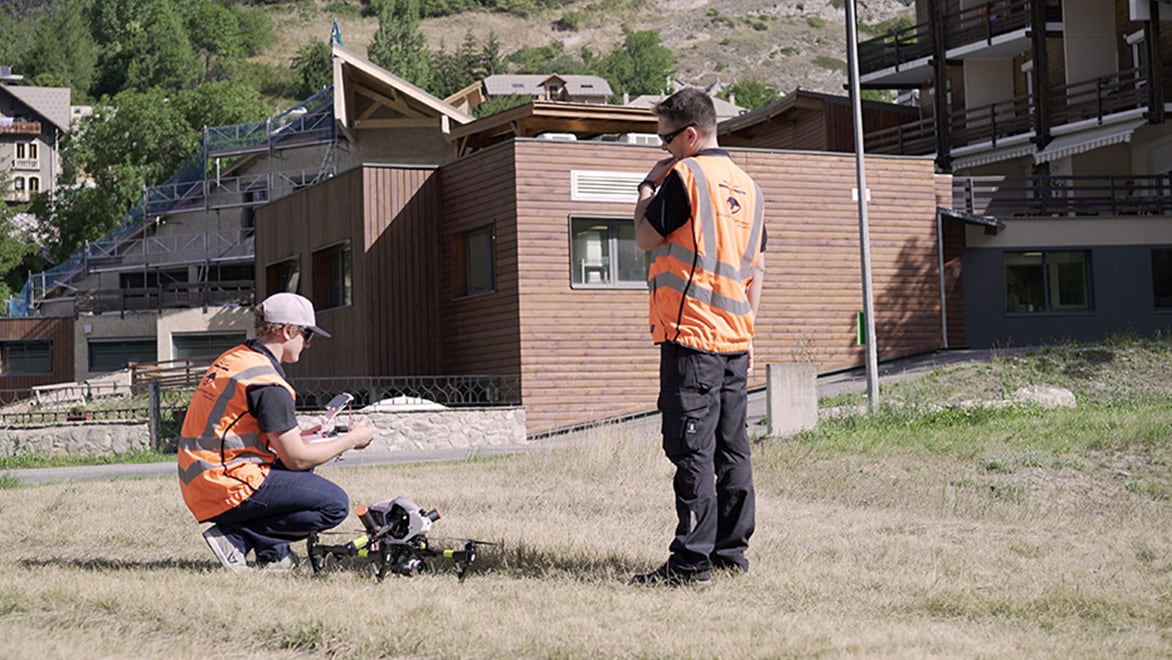 The ATFF team prepares to launch a drone mounted with a camera to capture data points for the exterior of a hospital facility in the Alps. Courtesy of ATFF.

The tools of the reality-capture trade

DATFF uses stationary laser scanners indoors, drones mounted with cameras for exteriors, and mobile mapping using a scanner attached to a car or backpack to fill in the gaps. “Basically, mobile mapping can be used with a system that is behind the car to collect all the data from the road or city infrastructure,” says Thomas Roland, ATFF’s marketing chief. This kind of mobility saves time, reducing reliance on multiple stationary scanners.

These various types of reality-capture hardware allow ATFF to collect exhaustive reality-capture data for a site. Previous surveying techniques could only gather exactly what clients requested at the time, such as the distance between two retaining walls, without any contextual data. “When a surveyor went into the site, he just collected the data he needed,” Fauconnet says. “Reality capture is the inverse: We collect all the data. And after, we filter what you need.” 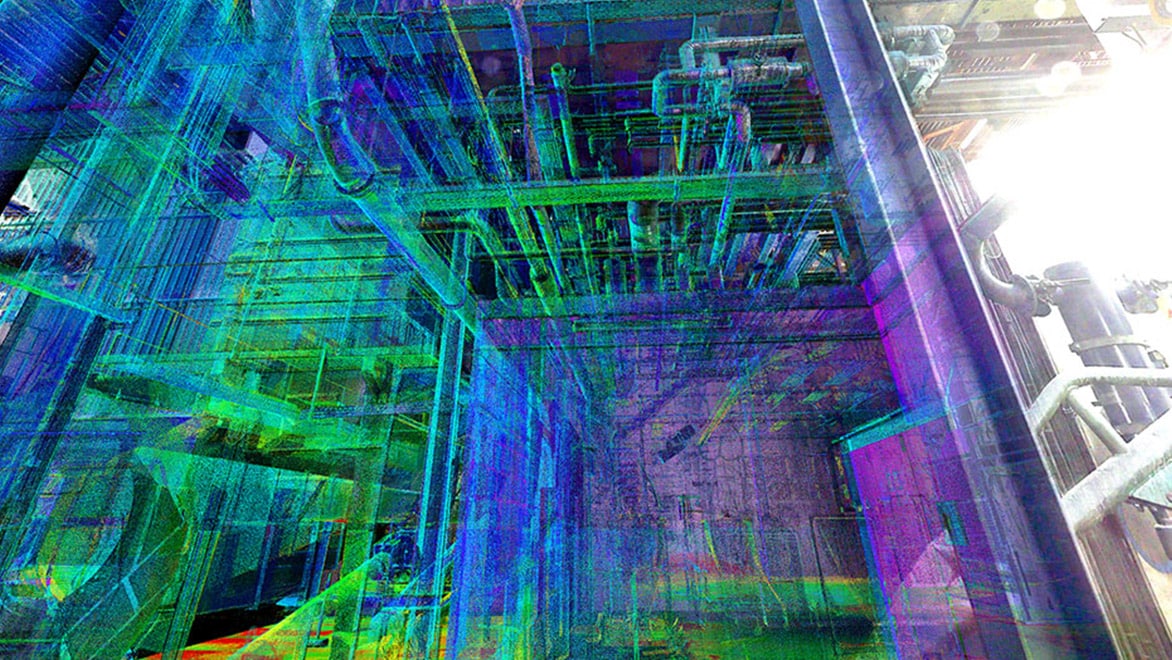 A point-cloud model generated from data captured in an industrial facility. Courtesy of ATFF.

The point-cloud models gather all the spatial data on a site in one place, and they can be shared (often via the web) with all stakeholders. The ATFF team then isolates individual elements within the point cloud and manipulates them, tailoring the models to fit clients’ needs. As the needs change over time, the data-based model can be reused for new purposes.

The thrill of capturing unconventional environments

For Fauconnet, reality capture is an adventure, and he gains specific satisfaction from charting unconventional—and sometimes hazardous—environments. As Roland says, the team is drawn to this specialized work because it’s like a “five-footed sheep” (a French analog to a “unicorn”—a rare and magical creature). Aerial drones mounted with cameras and portable laser scanners let the team members undertake risky jobs, allowing them to access, scan, and depart a dangerous site more quickly than with conventional survey methods.

For a scan of a nuclear plant, for example, Fauconnet and his team could stay on-site only for a very limited time before reaching unacceptable radiation exposure. “Conventional surveying of the site would have taken too much time,” Roland says. ATFF team members had to undergo a rigorous certification process, including training and an examination, before they were allowed to begin the job. Once they got on-site, the clock started ticking when an individual entered a hazardous area for scanning, counting down to the moment he had to exit and hand the baton to another ATFF team member. 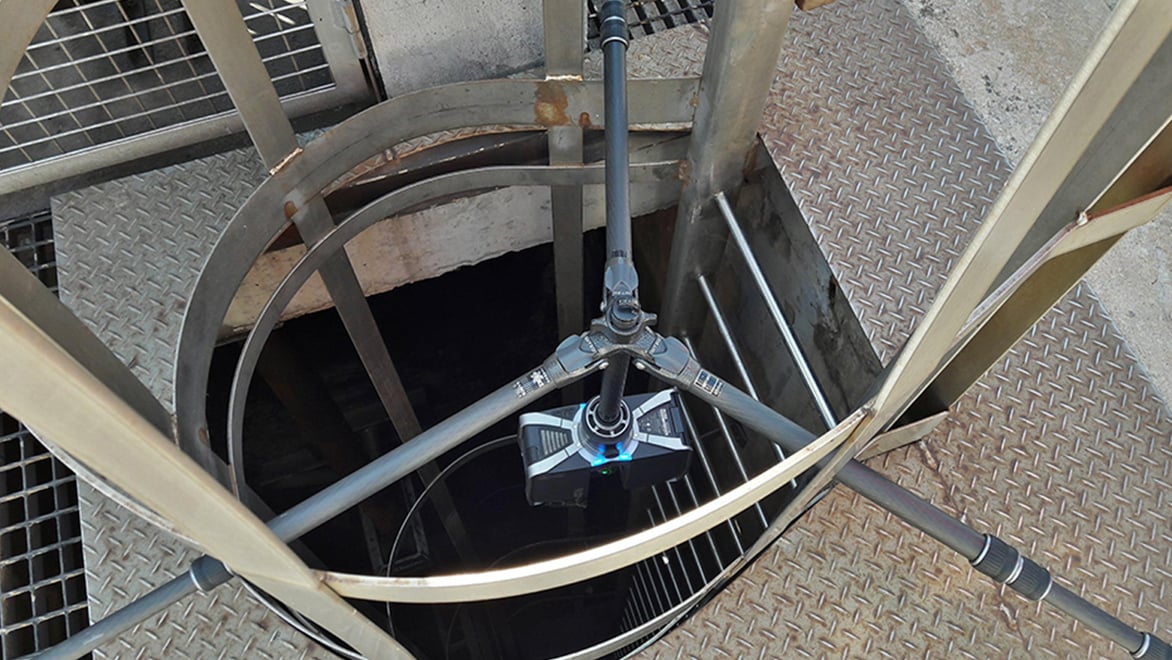 Scanning a sewer at a nuclear plant, where every second on-site counted against potentially harmful radiation exposure. Courtesy of ATFF.

Capturing the highest-elevation hospital in France

When ATFF was commissioned to update a Revit model to prepare for the renovation of a hospital in France, time was also of the essence. The Centre Hospitalier Aiguilles-Queyras, located in the Alps near the Italian border, is the highest-elevation hospital in France, sporting a complex roofline that’s tricky to map. Temperatures were below freezing (five degrees Fahrenheit) in midwinter when the team arrived to scan the site. “It’s hard to do good work when it’s freezing outside,” Roland says. “It’s hard for the person staying outside a long time to set up the drone and do it accurately.” Using an aerial drone mounted with a camera, ATFF technicians captured the roofs and facades in just one (cold) day. 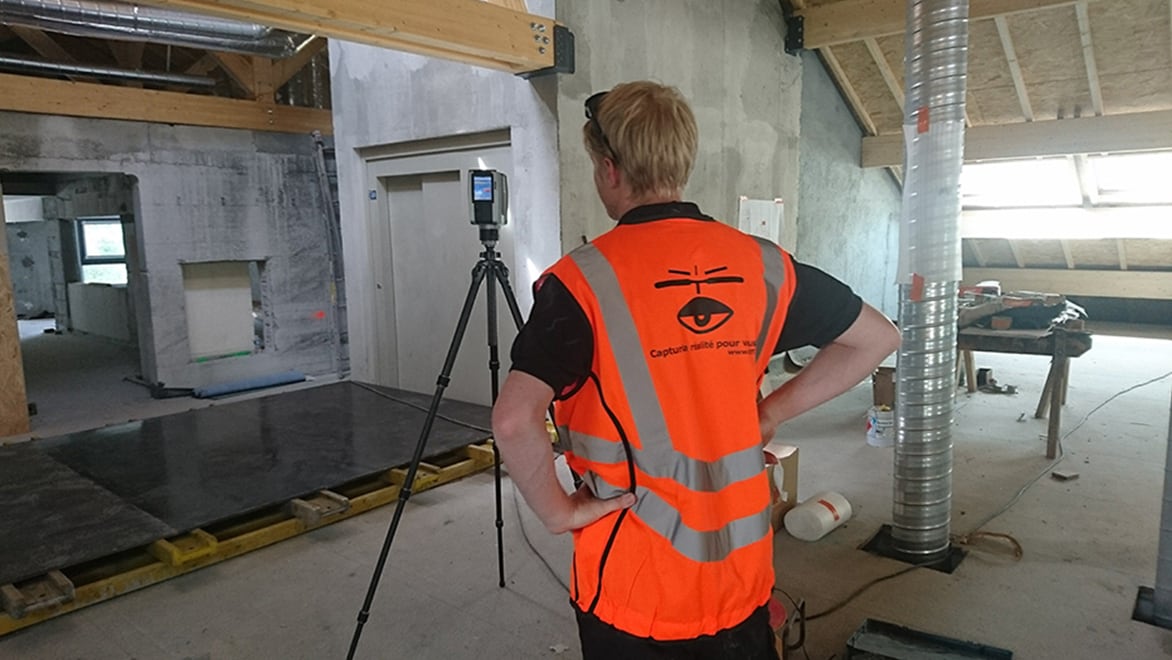 A surveyor scans the Centre Hospitalier Aiguilles-Queyras, the highest-elevation hospital in France. Courtesy of ATFF.

The hospital interior was also a challenging environment to map. In order to renovate the facility to provide more patient services, the hospital needed to document how the floors and walls had shifted and settled over time due to the mountainous landscape. This required ATFF to scan the entire interior—from lobbies to operating rooms—while accommodating the hospital’s constant activity 24 hours a day.

When people move through a space while it’s being scanned, they create distortions in the data. To avoid as much digital “clutter” as possible, the team performed interior scans using stationary laser scanners during mealtimes, at night, or on weekends. Over a total of eight days, the technicians scanned the 215,000-square-foot hospital inside and out, taking 952 photos and 1,200 scans.

Using ReCap to process, register, and clean up the site data, ATFF exported the resulting point cloud to Revit design software to develop a complete 3D model of the hospital. The model incorporated all data for the entire structure and allowed the hospital’s design team to visualize each building and floor. “It took approximately six weeks to model the hospital,” Fauconnet says. “And without reality capture and ReCap, the total project would have taken months longer.” 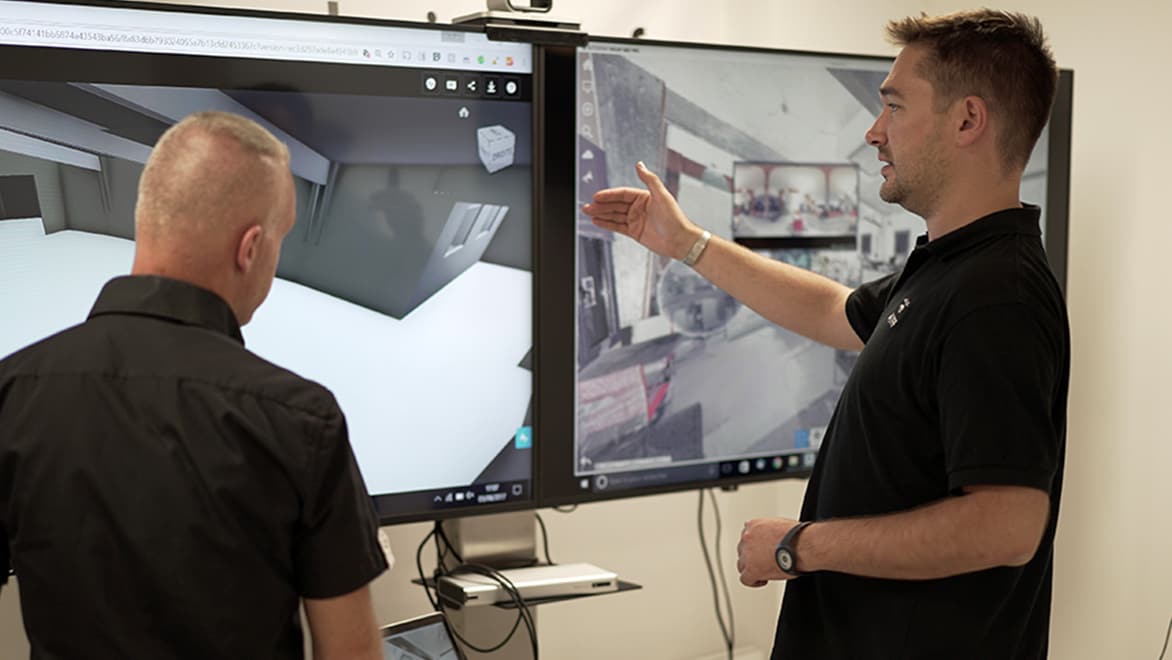 Florian Fauconnet (right) reviews the BIM models for the hospital in Aiguilles with the client. Courtesy of ATFF.

“Where nobody wants to go”

WIn contrast to the Alpine hospital, a recent project at a French electricity-transformer site near Lyon was easier for the team in terms of stray foot traffic—the facility is largely unstaffed and autonomous. However, the deadly voltage humming through the transmission lines, which feed power to nearly 90,000 homes, made it one of ATFF’s most treacherous sites.

To scan the facility, the ATFF technicians were required to wear special safety suits and communicate closely with off-site staff to notify them of their exact movements. All scanning had to be completed with stationary hardware because aerial drones weren’t allowed to overfly in the suburbs near Lyon in eastern France. 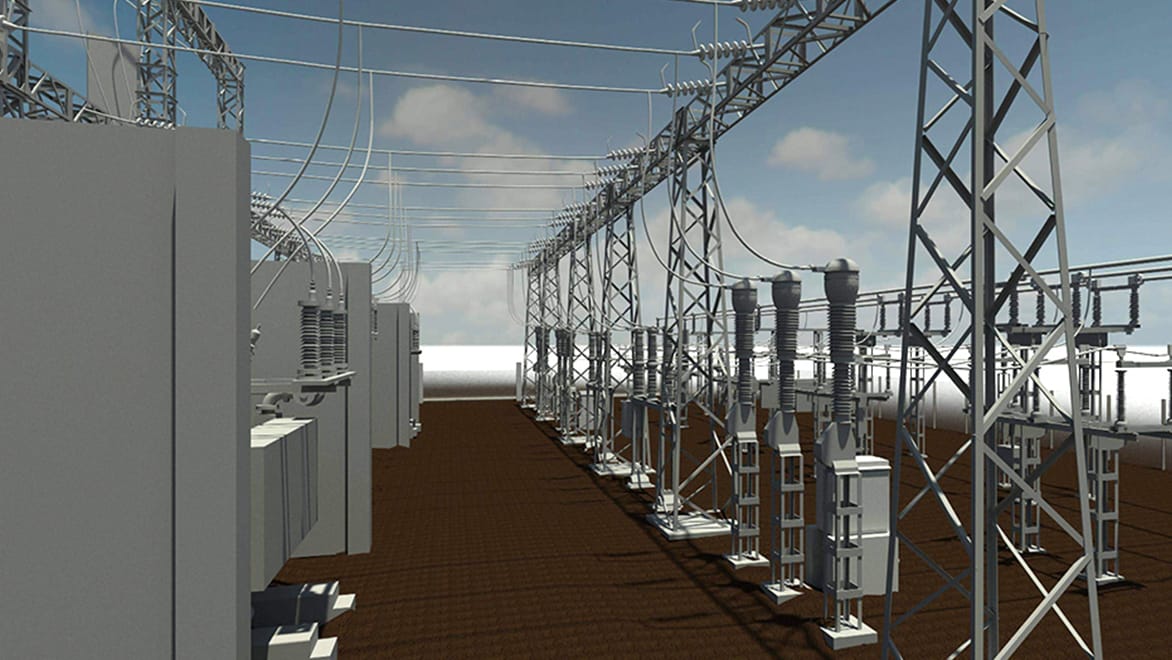 A 3D model of the transformer, based on data captured with stationary laser scanners. Courtesy of ATFF.

“It’s the main part of our business to go places where nobody wants to go,” Roland says. And with the upsurge of reality-capture platforms and techniques, ATFF is equipped to bring the rest of the world along to these treacherous sites—from a safe distance. 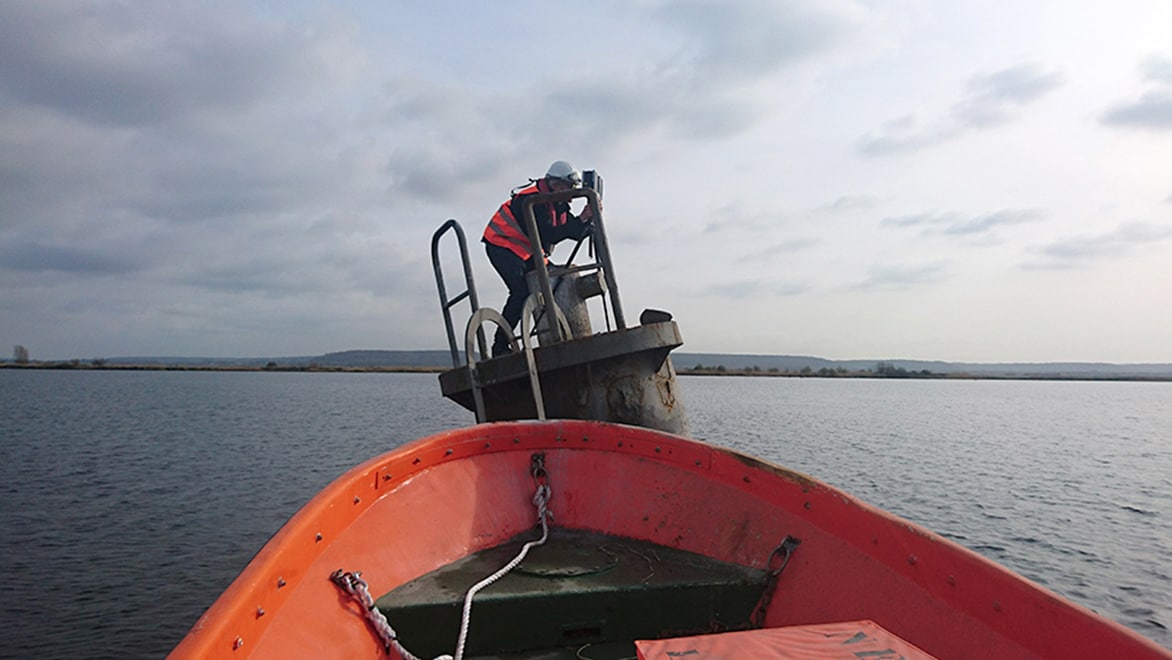 A fearless ATFF technician prepares to scan a waterfront industrial facility from an offshore vantage point. Courtesy of ATFF.