For Massachusetts-based Process Pipeline Services, the Plant 3D toolset included in AutoCAD (formerly known as AutoCAD Plant 3D) isn’t just a “nice-to-have.” It’s an absolute must. With a primary focus on pipelines and above-ground facilities, the engineering and consulting firm for the natural gas industry serves large natural gas distribution and transmission companies in the northeastern United States. From the very beginning of a project, 3D models help the company spot conflicts, manage constantly changing site plans, and reduce turnaround time in the piping design process.

Spotting round pegs in square holes

“Designing in 3D really separates our designs from our competitors,” says Process Pipeline Services owner Mark Wood. “You can actually see where there might be conflicts—not just for constructability, but also for maintenance.” Take one recent project as an example: A legacy gas regulator station providing gas to the entire city of Portland, Maine needed a new, very small footprint after the land was claimed by eminent domain. Process Pipeline Services faced the challenge of taking three buildings and condensing them to just one 50’x28’ station—less than three times the size of the previous installations.

"Much of the complexity was just trying to manage a site plan that was constantly changing and our space allotment was shrinking and shrinking," says Bob Gilbert, senior piping designer, Process Pipeline Services. "Every time we thought we had it all figured out, they'd come back and say, 'It's a little smaller now.'"

Even with the changing parameters of the site and location, they were able to make it all fit, see the clashes, and get gas flowing within a year—all with the help of the Plant 3D toolset.

3D from the get-go

For the firm's projects, 3D isn't at the very end. With the use of the Plant 3D toolset, it leads the project design from the very beginning.

"We try to get 3D going as quickly as possible," Bob says. "If I go out and do an as-built of a site, I usually have a 3D model within a week. And all of our designs go off of that 3D model. The exception would be if we really had to stop and do very simple line diagrams. Regardless, if we're working off something that's already existing, we try to get a 3D model sooner rather than later. Just because we know that helps to us to start visualizing and seeing and thinking about what needs to be done."

"It's also incredibly beneficial for the clients," Mark says. "We're able to gather their input upfront and work with them, whether it’s the orientation or desired location. From this, we can best understand their needs and desires in order to deliver what they want."

Outside of just the 3D models, Process Pipeline Services is looking to expand its use of 3D in the field. In an effort to say goodbye to sending a couple people to the site with tape measures, the company recently purchased its first 3D scanner in order to speed up the design process and increase accuracy.

"We have a rather large, extensive parts library that we've developed over the past eight years," Bob says. "We're talking about thousands of parts at this point. Because we know exactly what valve we're going to use, we can use what we have already created or, if it's new, get a cut sheet from the manufacturer to draw those valves so we have them for a current project and in the future. Sometimes the manufacturer actually has 3D models available to use as well.

"But, at the end of the day, if I can get a 3D model of a valve, meter, or whatever part it is that closely resembles what we're going to use, it’s always to our advantage," he continues. "This is especially from a size standpoint, but even from a visual basis, too. Our clients know what they expect to see for a valve and if it doesn't look the same, then there may be an issue."

When you need more than "just AutoCAD"

"Before we started working with the Plant 3D toolset, it was frustrating because I had to draw everything three or four times for every angle," Bob says. "That process has the potential for a lot of human error, despite your best effort…not to mention you can't see everything like you can with 3D models. Now, for example, if I need to adjust a length, I do it just once. No matter how hard you try, there's always the potential of a conflict that you simply aren't able to see in 2D."

But, more than anything, speed is key. According to Mark and Bob, the ability to work quickly is the biggest factor for using the Plant 3D toolset. The faster they can turn something around for clients, the better. And with dozens of projects going on at the same time, there's quite a bit of workload to manage.

"I personally feel like the Plant 3D toolset allows us to do the work of two or three people at times because we're able to utilize certain features that really just streamline so much of the process," Bob says. 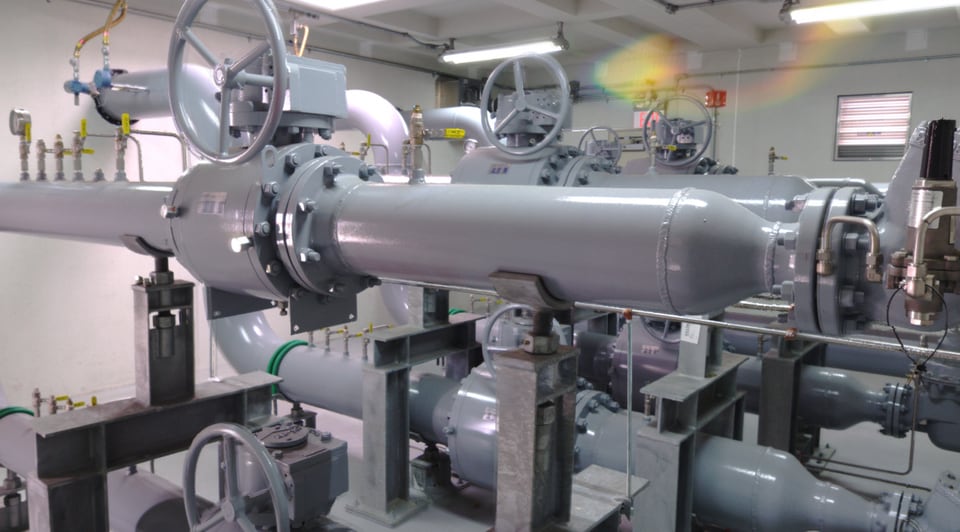 Final implementation of the regulator station in Portland, Maine.