Making the switch from AutoCAD LT to AutoCAD including specialized toolsets

Martz Technologies, Inc. is an industrial automation company that serves a wide variety of industries in the Mid-Atlantic states. For years, the engineering team relied on AutoCAD LT. However, it soon became apparent that a change needed to be made to help with standardization. It was a hard decision to leave AutoCAD LT behind. But once they made the switch to AutoCAD and started using the Electrical toolset included with a subscription, an entirely new world of efficiency and features opened up.

A bold move with AutoCAD

For 20 years, Martz Technologies, Inc. has served a diverse set of industries in the Mid-Atlantic states. Whether it’s electrical and control engineering for food manufacturing, freshwater filtration plants, or wastewater plants, the company focuses on upgrading and building brand new control panels and retrofits—which also require brand new electrical drawings to go along with it.

“From the very first day the company was founded, AutoCAD LT had always been used,” says David Slusser, project manager, Martz Technologies. “But CAD standards amongst our team have always been challenging. To an untrained eye you probably wouldn't notice a difference in our drawings over the past 10 or 15 years. But when we do peer checks and have stop points for review, you really pick up on the differences that one engineer might have from another.” 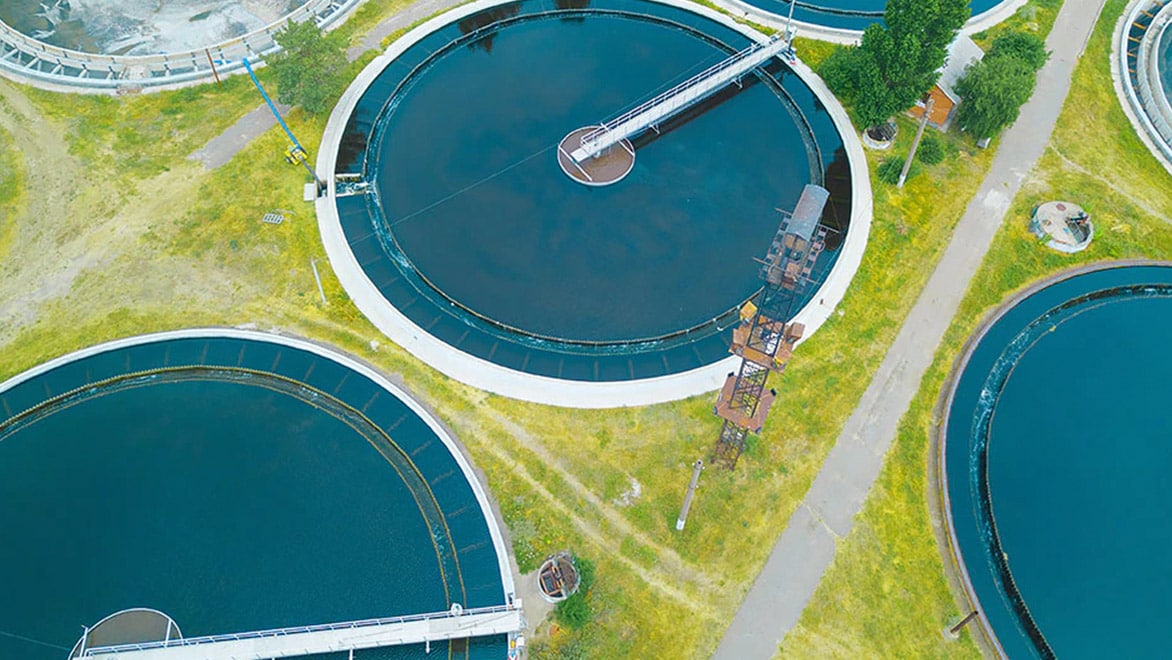 A couple of years ago, Martz Technologies investigated AutoCAD and the Electrical toolset after a newly hired engineer recommended it to help with their standards.

“We gave it a shot, but at the time and due to the high demands of our workload, we couldn’t invest the time we felt was needed to complete the learning curve,” Slusser says. “Ultimately, we fell back on old habits and stayed with what we knew, continuing to utilize the time-intensive ways of the past.”

“Last year, as a company, we made the decision to move forward with the transition to AutoCAD and the Electrical toolset,” he continues. “Realizing that the product was feature-rich and knowing we needed to accelerate our time to implementation, we invested in on-site training for our engineering group from Autodesk’s partner Synergis Engineering Design Solutions.”

A-ha moments with the Electrical toolset

A key decision in the transition was to appoint one person, Rich Kaminski, to be the champion for AutoCAD in order to maintain oversight of the process and the company’s drawing standardization. With training and advice from Synergis, Slusser and Kaminski could immediately see how their standards would improve.

“When we were using AutoCAD LT, we basically tried to make it a ‘pseudo Electrical toolset’ to standardize symbols, and it didn’t work out well,” Kaminski says. “We had situations where someone would modify the symbol library on an individual laptop, but then forget to upload it. I’m now able to just get everything on a global server and everyone has access. For example, if I modify an icon, everyone else can use it, and it’s the same throughout the company. I found this really helpful to get us on track.” 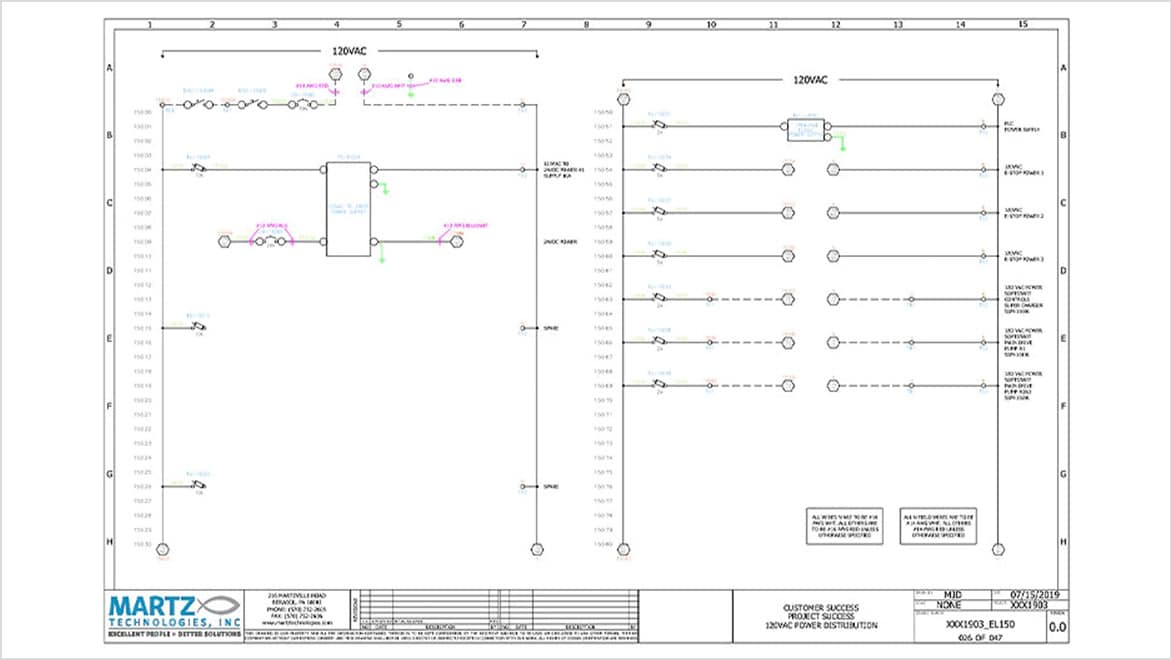 While it was great to finally be meeting the core standardization goal, they were happily surprised to learn how much more there was in store.

“During one of the training sessions, we learned that we could take a drawing with batch changes, export it into Excel, modify it, and then import back in,” Kaminski says. “Our eyes were wide open for that.”

A bold move with AutoCAD

“The ability to manipulate descriptions in AutoCAD from a spreadsheet is so much easier than opening up each drawing, particularly when exporting for use with programmable logic controller (PLC) integration,” he continues. “When you have a couple points of IO that need to be changed, it's very monotonous to open up each drawing and edit each line. Back when we were using AutoCAD LT, we did a project with 2,400 points of IO and a 260-page drawing set. Despite multiple people working on it, it took us six months to complete it. With the Electrical toolset the ability to edit descriptions and our drawing in Excel is a massive benefit and time saver. We could have done that project in half the time.” 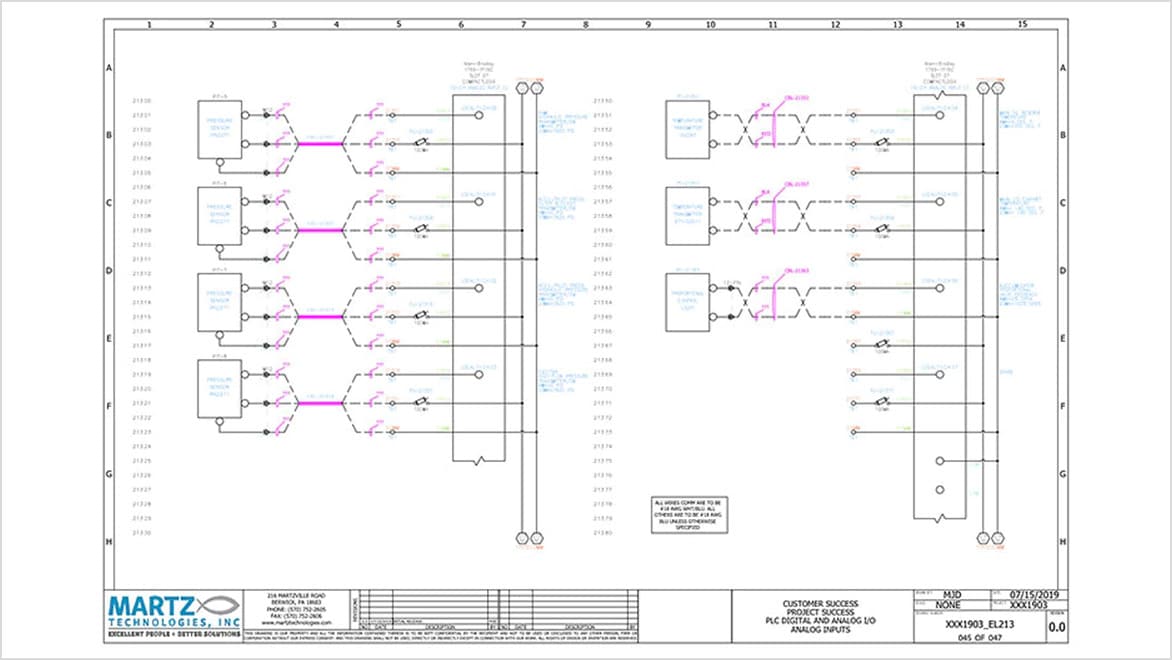 Features like wire referencing, numbering, and even bill of materials (BOMs) are also taking on a whole new meaning.

“From a management viewpoint, the BOMs are so important,” Slusser says. “As we move through our implementation, we will be able to know the BOM is accurate and aligns with the drawing set. That’s huge.”

Now that the team has been working with the Electrical toolset for a few months, they are already seeing the benefits. Back in 2017, Martz Technologies created drawings in AutoCAD LT for the control panels of one hydraulic press at a manufacturing facility of a long-time customer. With AutoCAD LT, the team spent 220 hours drafting. Now, for a new project with the same company, they are working on three new hydraulic presses using the Electrical toolset.

For the first press, they completely overhauled the AutoCAD LT drawings from 2017 and updated them using the Electrical toolset. The second and third presses all needed to be in one large drawing package. After converting the first drawing to the Electrical toolset, the numbering scheme was completely re-engineered to accommodate a single drawing package. 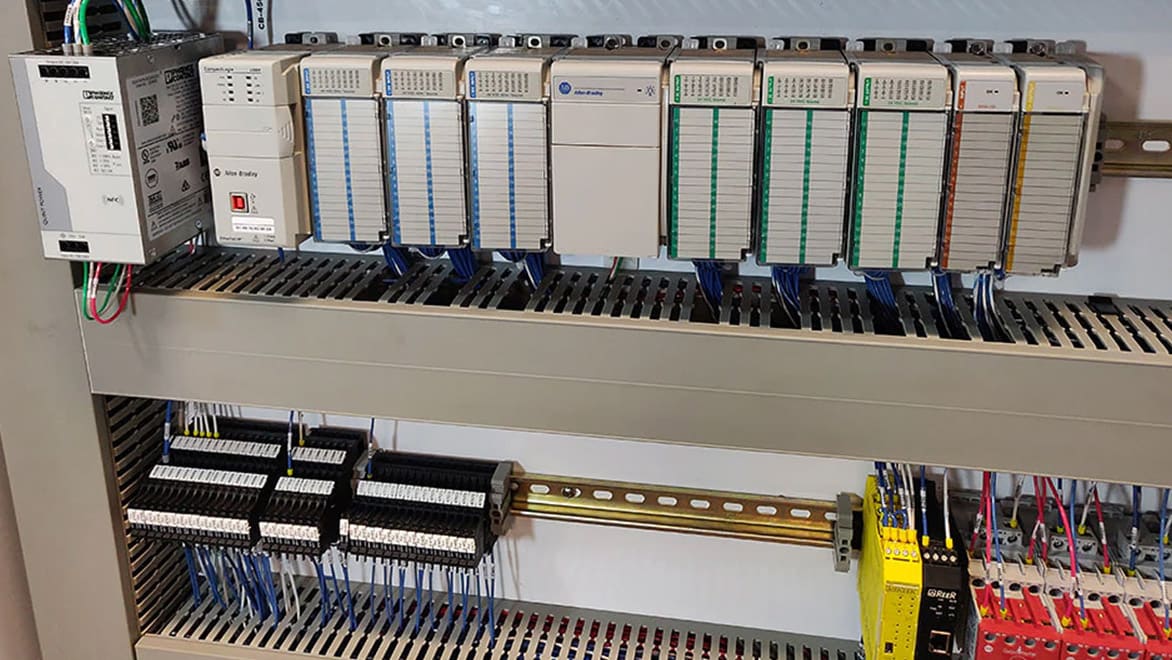 The third press is physically twice the size of the other two presses, which increases its complexity. Using the first press’ converted drawings as a foundation, they were able to modify and expand the drawings with ease.

The total hours spent on the new project clocked in at just 550 hours—including all the new presses, complexity, additional training, and upfront customization. As they build up these customizations, time spent on future projects will decrease even further.

When it comes to switching from AutoCAD LT to AutoCAD, Slusser can understand the fears and concerns. But, to him, it’s worth it.

“For anyone thinking about moving from AutoCAD LT and using the toolsets included with AutoCAD, I’d say just do it,” he says. “But you do have to be patient. It's like we're just on the tip of the iceberg here, and I feel like there's much more for us to learn and use in the future.”