How to bring a classic motorcycle design back to life

International design firm KISKA was inspired by an iconic 1950s motorcycle to create a range of new street-bike models for the Husqvarna brand. Blending simple, cool design and advanced engineering, the company’s designers used technology tools to take the emotional essence of their designs from sketches to 3D models to full-size prototypes to final designs for manufacturing. With the resulting motorcycles—the Husqvarna SVARTPILEN (Black Arrow) and VITPILEN (White Arrow)—KISKA is modernizing classic motorcycle design to win over both seasoned riders and a brand new audience of urban design aficionados to the motorcycling lifestyle.

As any advertising pro will tell you, the secret to selling is to make an emotional connection. If you offer a lifestyle, fashion, or aspirational purchase, you’re not selling a product—you’re selling a feeling.

KISKA understands that like few other industrial-design studios, which made it the perfect choice to bring back and update the iconic Husqvarna Silverpilen (Silver Arrow) motorcycle sold between 1955 and 1965. Taking inspiration from the original bike, KISKA created two gorgeous new models, the SVARTPILEN and VITPILEN. 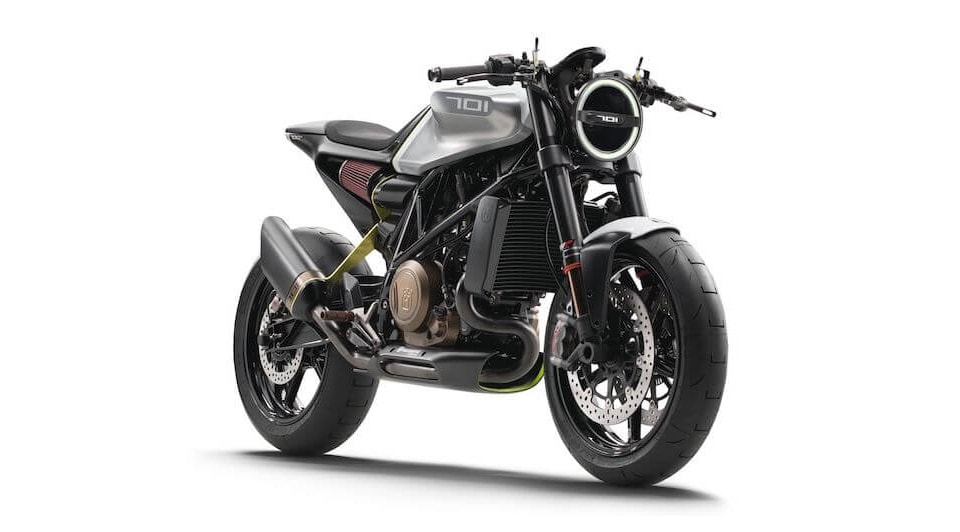 The VITPILEN 701 is one of two models KISKA designed to reimagine the 1955 Husqvarna Silverpilen. Photo by Mitterbauer H., courtesy of KISKA.

KISKA began in the 1990s designing motorcycles for KTM (owner of the Husqvarna brand), and the firm’s work has evolved over the years to encompass all of its clients’ brand touch points, from concept through sales materials. Design lead Craig Dent explains that the common language is emotion. “If the products we make don’t provoke an emotional response in the customers, we’re not doing a good job,” he says from the company’s Salzburg, Austria headquarters. (KISKA also has locations in Germany, the United States, and China, employing more than 260 designers across the company.)

To design evocatively, Dent and his team of designers look far beyond the object in front of them. As a result, the SVARTPILEN and VITPILEN richly illustrate KISKA’s process of designing the entire brand experience for the product. “It’s one big story; it’s how everything comes together,” Dent says. “Our vision for all our clients is to offer them exactly that, not just to receive a briefing about a product they want in their lineup. We’re much too curious about their brand to do that, and most of the time, we find ourselves jumping in deep and analyzing and questioning everything they stand for.” 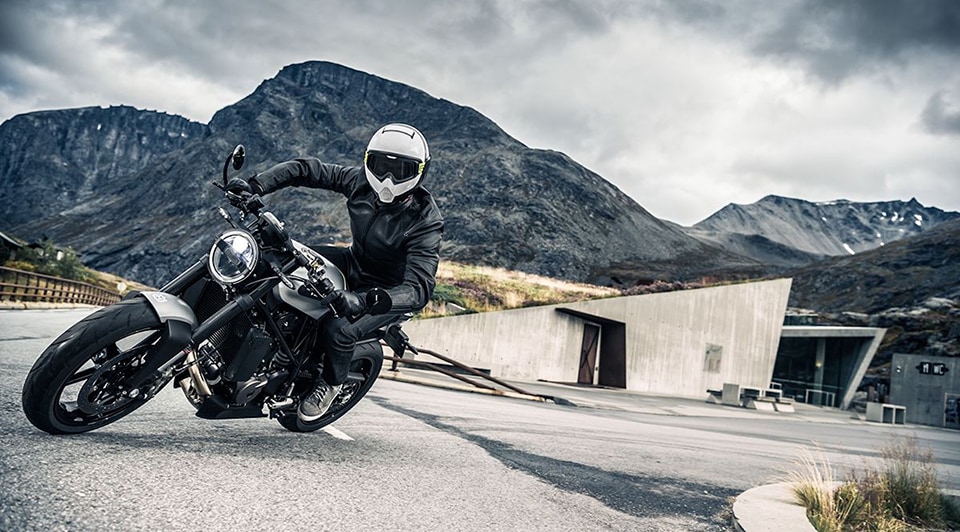 Don’t let the big picture get lost in the details

So how do you remain a starry-eyed dreamer when the economic or practical realities—like a looming presentation deadline or the race to make a beautiful part that works well—come crashing in?

“My responsibility is to stay tuned out from the nitty-gritty, from the details,” Dent says about the challenge of retaining a big-picture view. “Even though our teams are working on the actual nuts and bolts, we ask, ‘Is this still going along with the vision we have for that brand? Are the solutions the engineering team’s coming out with still playing to the emotional design?’ If we were sitting on the doorstep of the KTM engineers and could just say ‘hi’ every day, we’d lose sight of the emotional response we want to create and fall straight into ‘Okay, that’s the easiest solution, let’s just go with it.’ Having distance gives us a zoomed-out approach.”

Bringing back the best of the past

What made the Silverpilen the one to bring back? The ’50s and ’60s were something of a heyday for Husqvarna. In those days, the brand was the epitome of cool, winning motocross races worldwide and attracting fans such as movie star and motorcycle aficionado Steve McQueen. In later years, the brand passed from owner to owner, none of whom looked after it very well—until KTM acquired Husqvarna Motorcycles in 2013. 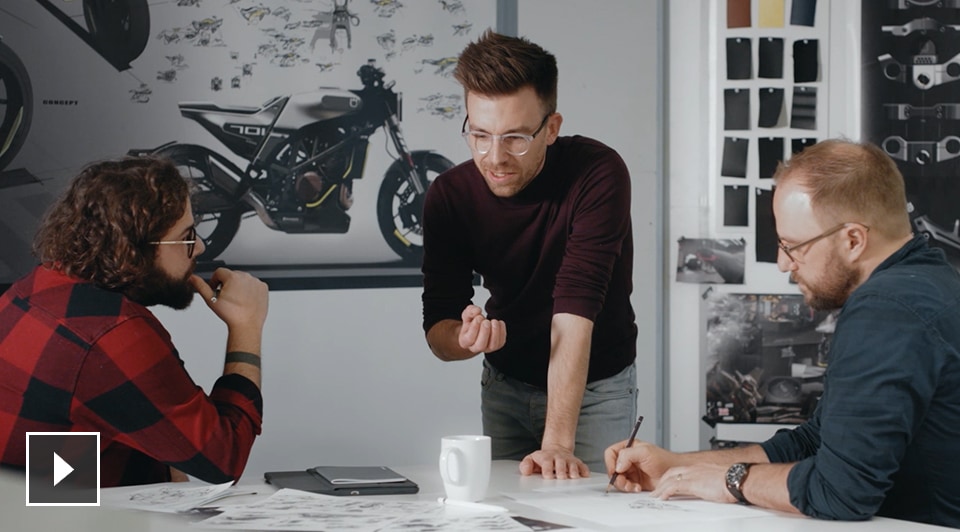 Design lead Craig Dent (center) reviews concepts based on the simplicity of the classic Husqvarna Silverpilen with his team.

The design and engineering of those earlier days was what Dent calls “beautifully simple, beautifully reduced.” “We’re fascinated by the mechanical beauty products had back then,” he says. “You look at it and understand it, instantly knowing what the thing can do or what you could do with it, and that’s exciting.”

Husqvarna’s goal for reviving the Silverpilen was to create a street bike that would appeal to new audiences as well as seasoned riders. The bikes needed to be both easy and fun to ride in order to reach millennials and entice new riders into the motorcycling lifestyle. Approachable design and maneuverability, geared for urban riding, would attract urban style and design buyers.

KISKA took what Dent calls an inside-out approach to the design of the Silverpilen-inspired bikes, looking closely at the core user to come up with an architecture that expresses its fundamental simplicity. “We were so inspired by the honest, authentic approach those bikes had,” he says. “We tried to do exactly that with a modern interpretation, modern architecture, and modern way of putting things together.” 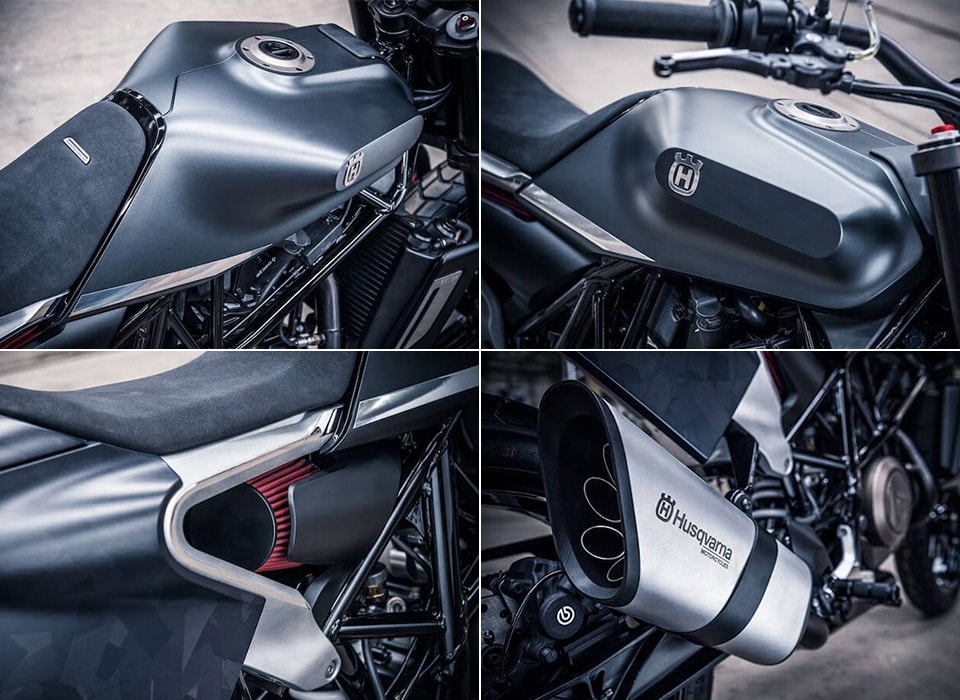 KISKA’s approach—where emotional response is the constant touchstone—is no easy feat. But the company found the right techniques and tools to realize the SVARTPILEN and VITPILEN with this goal in mind. Everything starts with pencil sketches on paper. Design staff clear their desks and schedules, put headphones on, and aren’t interrupted for three or four weeks; Dent says it’s where the magic happens. They look for a new and innovative result that stirs emotions, both within the company and with the client.

The next step is realizing those sketches in CAD, and Dent calls Autodesk Alias the go-to software to translate 2D sketches into 3D designs. But to elicit emotion, even a 3D picture on a flat screen is limiting.

Next comes 3D milling into a design prototype. Data collated through CAD software is converted into toolpaths with Autodesk clay-milling CAM software and run through KISKA’s in-house mill to create the clay model. The clay model is then lovingly crafted and finished in such detail that it becomes the basis for the final designs for manufacturing.

After the actual-size prototype is painted the right colors, it’s scanned at very high resolution, and the data is fed back into the CAD workflow, where surfaces and volumes are rebuilt exactly to specifications.

Virtual reality (VR) also helps the process along. When the 3D data is plugged into a VR system, the designers can pick up, spin, turn, and inspect the design from every angle, coming as close to a finished reality as possible prior to the milling stage. 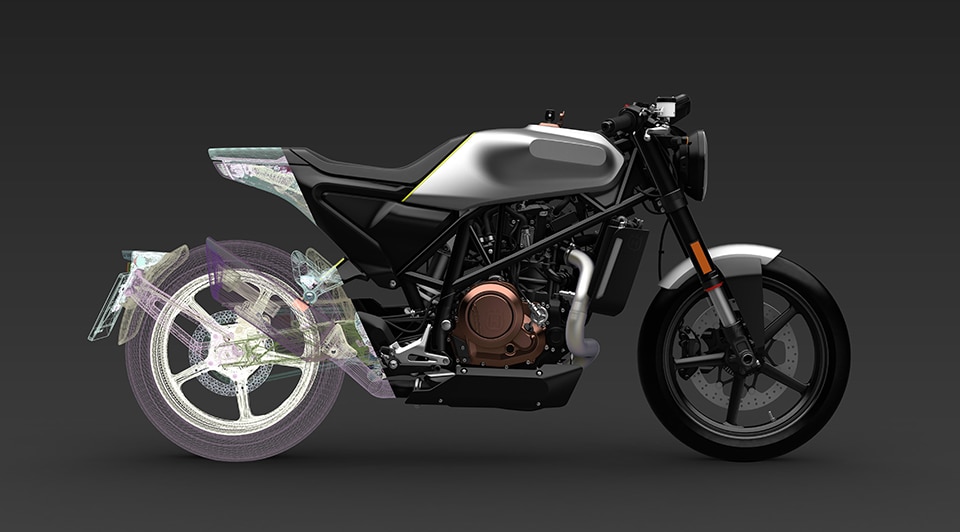 Attracting a new audience through design

With emotion-grounded designs that attract people who have never considered motorcycling before, KISKA has helped the 115-year-old Husqvarna Motorcycles move toward becoming a lifestyle brand. The SVARTPILEN and VITPILEN have won over both experienced and novice motorcyclists with their style and performance: sleek and simple, yet filled with modern technology. The super-lightweight bikes, each weighing in under 350 lb, deliver the thrill of motorcycling with the help of advanced engineering, including a single-cylinder motor with two counter-balancers to deliver a smooth ride, slipper clutches, and ride-by-wire technology that controls the throttle electronically.

“There have been a lot of interpretations of classic bikes in the market lately,” Dent says of the design of the new models. “But Husqvarna was always pioneering, and we wanted to be forward-thinking, not just harkening back to the past. Where others have tried to do retro design on their bikes, we wanted to be cutting edge, superminimalistic, and really progressive in our approach but still have this simplicity that the products back then had.”

Explore the software KISKA used to reimagine a classic motorcycle design—and find out how the tools in Alias can help you bring your designs to life.