A multibillion-dollar infrastructure project aimed at improving the overall passenger experience recently got under way at one of the largest international airports in the US. The project involved expansion and redevelopment of an existing passenger terminal with a variety of enhancements, including adding new concourses and replacing or expanding aircraft gates.

US-based infrastructure solutions firm HNTB worked to design some of the heavy infrastructure components required to support the new terminal facility. The project included a new central tunnel system to provide the conveyance of utilities, baggage, and passengers to satellite concourses.

While creating and iterating on their designs, the HNTB team needed a geospatial context, or real-world view, to see how each proposal would impact surrounding infrastructure. Team members started by creating a digital twin, a 3D model that provides real-world visualization and ease of collaboration. To ensure that their infrastructure designs also supported location-based intelligence, HNTB team members adopted a new solution for their building information modeling (BIM) process. The solution provides any project stakeholder visibility in a 3D web-based experience and enables connection to disparate data and systems to better share information, iterate plans, and monitor progress. 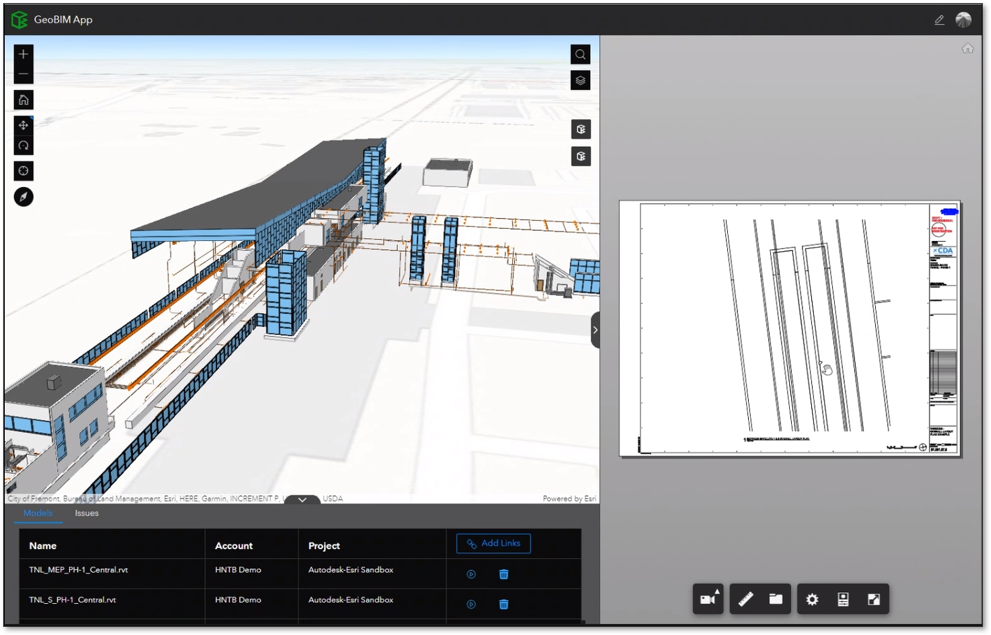 Dynamic drawings and plan sheets can be generated and reviewed directly within the Autodesk Forge Viewer in ArcGIS GeoBIM.

At the outset of work on a new central tunnel system, a key part of HNTB's strategy involved the production of a digital twin that helped initiate a model-first design. The HNTB team needed to allow for dynamic and agile changes as the design progressed, which meant standards and processes would need to be established across multiple systems.

According to Darin Welch, Associate Vice President for Geospatial and Virtual Engagement Solutions, HNTB Technology Solutions Center, "A big piece of [this strategy involves] solid and reliable integration across our technology framework. This is an Autodesk-based deliverable project, but [it] also [has] a lot of geographic information system [GIS] data involved. [With] GIS being very good at visualizing, we knew that the digital twin strategy on this work had to include [different] systems."

HNTB previously developed a process and custom application for the Long Island Rail Road Jamaica Station 5D application. That project, Welch says, was the firm's first deep dive into integrating data across an infrastructure-focused software system using data from GIS, CAD/BIM, and an enterprise project portfolio management software. Successful integration across these systems established HNTB as a "dominant industry consultant,” says Welch. By making data work together for the benefit of design and construction projects, HNTB enabled teams to visualize data across CAD, GIS, and BIM.

As such, Esri approached HNTB to become an early adopter of ArcGIS GeoBIM, a solution that delivers a web-based experience for teams to collaborate on BIM projects and issues using project information from Autodesk BIM 360* that is blended with geospatial context from ArcGIS. Welch says HNTB had just been awarded the airport tunnel project, and it was a "right place, right time moment" because he knew integration across different tools and systems was going to be important.

“We saw ArcGIS GeoBIM as a great opportunity to help visualize [design variations] because the subsurface utilities were in both CAD and GIS formats. And because of the model-first design approach of the tunnel and how that connects to the new concourse and terminals, we needed a way for the team to better visualize changes with the 3D subsurface utilities . . . like the air duct system.” 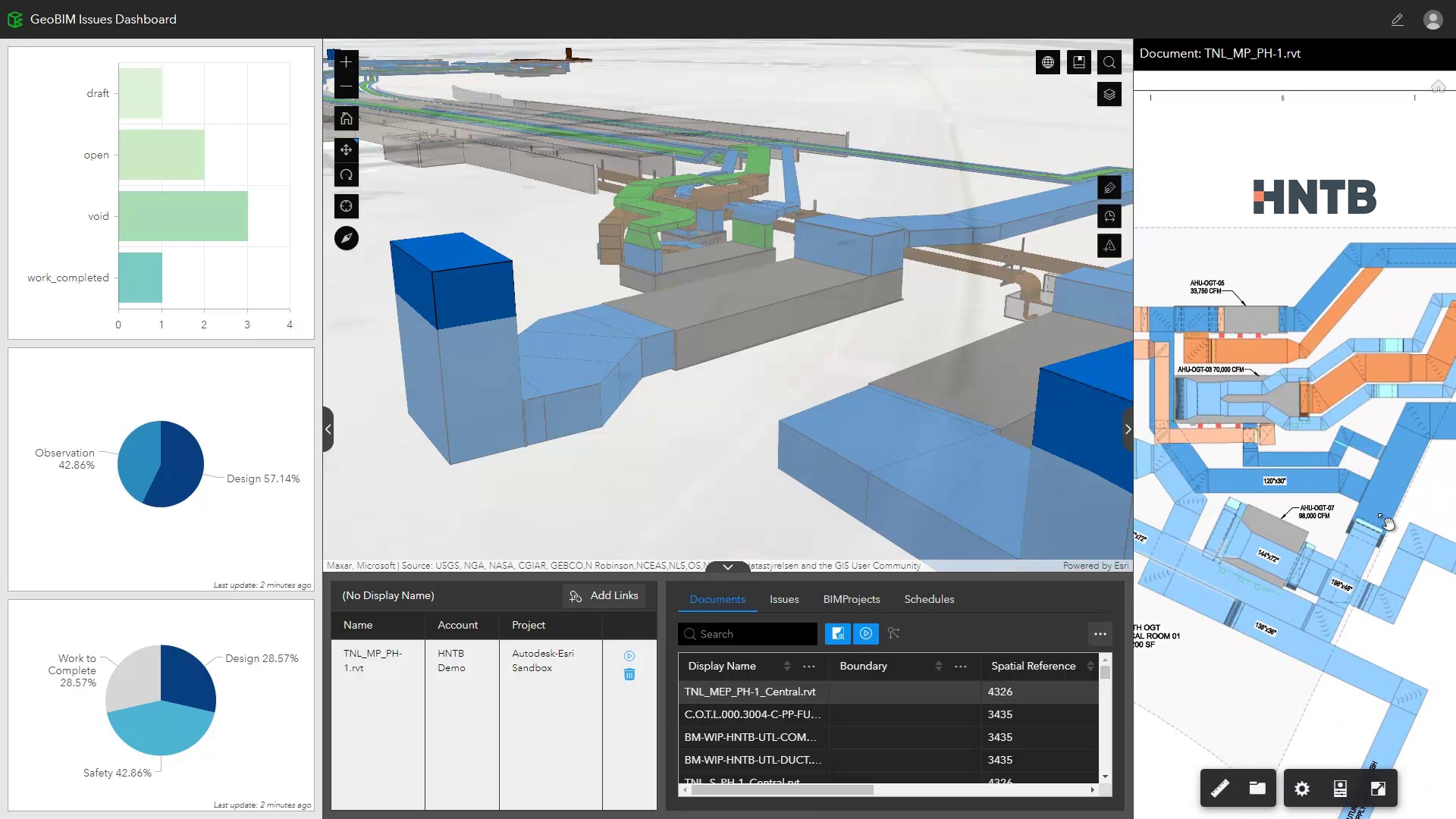 Issue logs from BIM360 are directly incorporated into the ArcGIS GeoBIM experience providing the ability to review and revise as team collaboration occurs.

Welch says ArcGIS GeoBIM was the perfect fit for the tunnel project because it is a significant step in a web setting to achieve "integration without translation," which is core to what his team is trying to accomplish and enables faster workflows. He believes ArcGIS GeoBIM and Autodesk BIM 360 can bridge the gap in accessing data from one system to another without translating data between systems.

"[HNTB team members and our end users] don't want to . . . see a dataset from another tool, another system, and have to go through the process of, 'Oh gosh, where's the latest version of that? I have to translate that just to see it in my BIM or GIS software.' And that was really what piqued our interest in ArcGIS GeoBIM," he says.

Welch adds, "You're losing efficiency in the need to constantly translate those things. And you risk accuracy if you're not using the correct data, or somebody is using something that was translated and didn't realize it should have been retranslated."

"When we first heard about the partnership, it excited us because we could finally integrate the two solutions without having to do continual translation," says Welch.

HNTB team members also saw ArcGIS GeoBIM as the next progression to their web-first GIS approach—diving into the 3D realm, which is important as they begin dealing with more projects that are doing model- and 3D-first design approaches. The team began using ArcGIS GeoBIM to focus on the tunnel design and understand the exact locations and arrangements of the tunnels to accommodate things like passenger baggage and utilities.

ArcGIS GeoBIM connects to Autodesk BIM 360 and enables easy-to-use web-based experiences for project teams to collaborate on BIM projects and issues using data from multiple systems in a geospatial context. 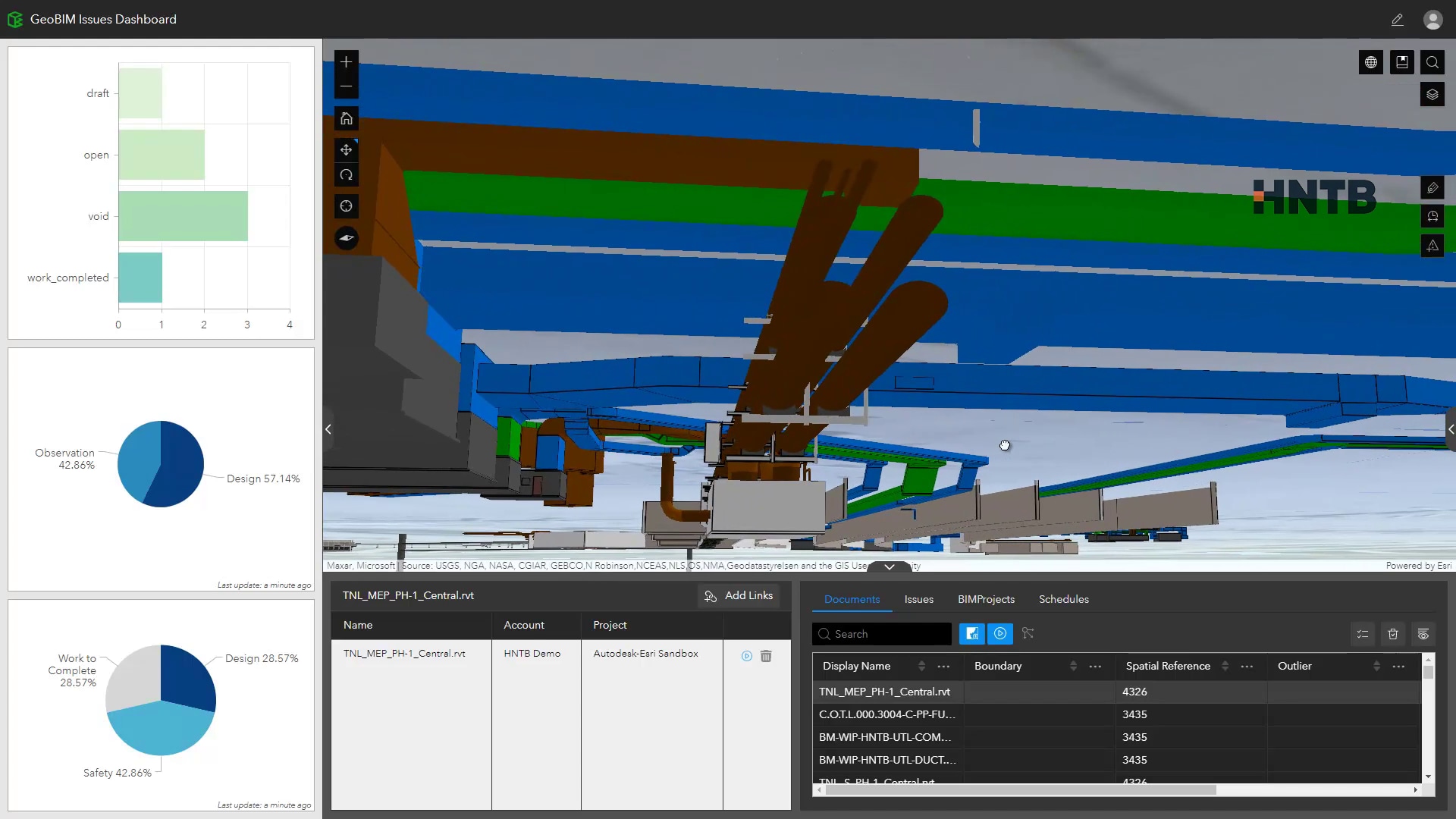 The use of ArcGIS GeoBIM for this large airport infrastructure project has yielded positive benefits. According to Welch, a significant benefit is the ability to connect ArcGIS GeoBIM users in a web-based environment directly to the HNTB team's project data on Autodesk BIM 360, no matter where the data is coming from. Clients can now access project materials, like live working files and the latest maps, in a single location using what he dubs a "web-first GIS approach."

Welch adds that ArcGIS GeoBIM also opens the door to the concept of a data cooperative. Despite data coming from multiple systems, end users can be confident that they are accessing the most accurate information.

"[By being] able to see data and 3D civil design, 3D architecture, subsurface GIS 3D utilities, etc. in a single application that also lets people be notified of conflicts or item markups coming from the field, we were able to see the huge value of ArcGIS GeoBIM," says Welch."ArcGIS GeoBIM is like the ultimate aggregator of information. We often find [data] silos, and this solution lets us bring information together into that single interface."

Welch notes that except for specific projects, HNTB team members couldn't previously work solely within one system. He explains that only on larger projects would they try to go through the time-consuming steps of data translation or visualizing the cross-reference of civil, architecture, structural, and related GIS data all in a single viewer.

"To us, ArcGIS GeoBIM was a way to streamline getting that data in a single solution that also shows the promise of the decision-making aspect. It helped us visualize the latest design variations of the underground tunnel and understand the potential impacts to utilities," says Welch. "We want it to be an interactive, immersive visualization experience for anyone on the project team."

Welch says ArcGIS GeoBIM offers a very intuitive experience and performs well even when dealing with a lot of heavy 3D data. The BIM staff of HNTB quickly saw the unique possibilities of the ArcGIS GeoBIM tool.

Welch says, "As GIS professionals, we're always thinking of geospatial problem-solving ideas. When we brought other disciplines into an environment that aggregates and shows data from multiple systems by combining BIM and GIS data, the BIM staff started proposing additional ideas of their own for how this could be used."

Welch and the HNTB team are looking forward to using ArcGIS GeoBIM when managing multiproject or multiphase assignments on behalf of the client. Multidisciplinary project teams composed of consultants and subconsultants will have the opportunity to see the latest information from multiple systems together by bringing BIM and GIS into a simple, easy-to-understand interface.

"Sometimes our client is an owner/operator and has no effective way to visualize the latest design, iterative analysis, or impacts of any kind of design changes. And seeing that as a PDF drawing, map, or even a paper printout is just not acceptable anymore," says Welch.

He adds, "Our client partners are looking for ways to be more interactive and an integrated part of [the] review and decision-making [process]. And so we do see [how ArcGIS GeoBIM] can help us expand complex projects with different team members who need to have an informed voice and the ability to understand what they're seeing and the issues that their projects are facing."

“If you're able to see data pulled from disparate systems in a tool like ArcGIS GeoBIM, and we can bring that data into a single application to be able to ask questions and make decisions from it, that's where we really see the value and potential of ArcGIS GeoBIM.”