Piecing designs together as quickly as they are imagined

GARANT-Filter designs and manufactures energy-efficient ventilation, gas cleaning, and dedusting systems to control air pollution in a wide range of heavy industrial applications. The company often competes against much larger organizations and needed a way to set itself apart during the sales process. To do so, GARANT-Filter developed a specialized configurator to rapidly develop accurate 3D models of its customized solutions.

They use the tools available in the Autodesk Product Design & Manufacturing Collection to speed up their processes from the initial customer request all the way to manufacturing. The concept and design begin with iLogic technology in Inventor. Their configurator makes the initial modeling process four to five times faster to help GARANT-Filter impress customers and win more bids.

When you think of environmental technology, your first thought may be solar panels or electric vehicles, but some of the most crucial technologies are those that protect the air we breathe. GARANT-Filter is a small company based in Lahr, Germany that specializes in the design and manufacture of energy-efficient ventilation, gas cleaning, and dedusting systems used to control air pollution in the asphalt, foundry, aluminum, and non-ferrous metals industries. The company is part of the ENTECCOgroup, a group of medium-sized companies who have teamed up to appear on the market together and focus on different industries.

“We often say that the air coming out of our systems is cleaner than the outside air,” says Frederik Mussler, Process Engineer and Executive Assistant to the CEO. 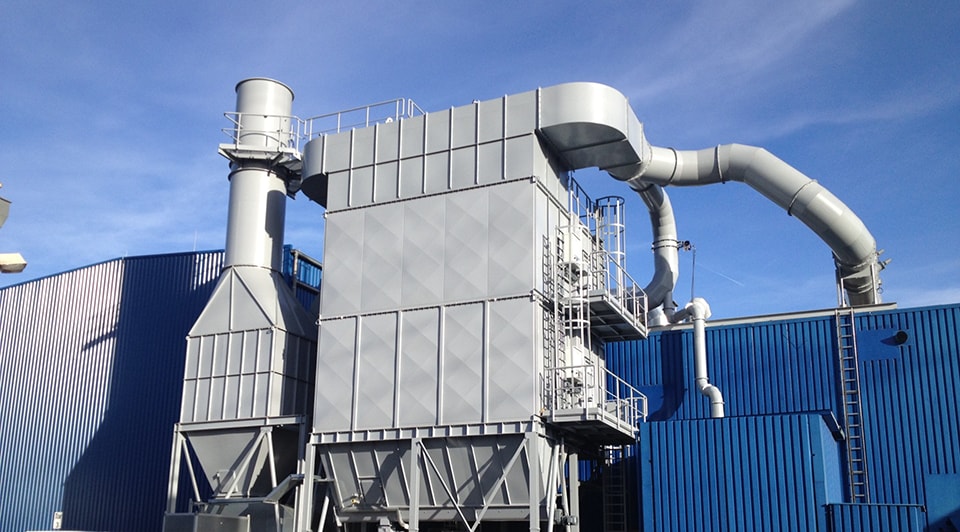 The systems GARANT-Filter makes are extremely large, often rising two stories high or more with complex piping and filtration systems that connect to the facility at anywhere from five to 50 points. These systems are capable of circulating up to 500,000 cubic meters of air every hour. While the piping components are, individually, relatively simple (pipes, bends, branches, cones, and ductwork), the assemblies are highly complex and unique.

“Many of our projects are retrofits for buildings from the seventies and eighties,” Mussler says. “Typically, we don’t even have 2D drawings to work from. We go to each site and take photos and measurements to figure out where our piping will connect. We can’t build our systems with off-the-shelf components because there is always something that must be customized.”

Standing out in a competitive market

In a typical design and manufacturing workflow, building a 3D model for this type of assembly would be extremely time-consuming, requiring a designer to start with a standard part and then adjust the parameters individually for hundreds of custom components.

This was not a realistic option for GARANT-Filter, which often competes against companies with more staff. Also, GARANT-Filter routinely creates a complete 3D model at no charge as part of the sales process. While the 3D model is usually enough to visualize the concept, they also use the rendering and VR tools in 3ds Max to provide the most realistic experience possible. 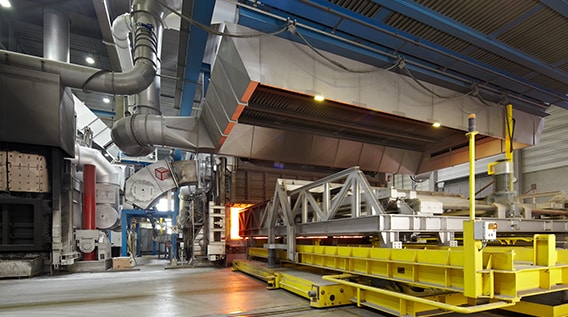 “Our business depends on finding a perfect solution for the customer, and in our industry, that means providing highly customized assemblies,” Mussler says. “In other words, we are not selling stock items. To stay competitive, we had to automate the process. Many of our competitors don’t create a 3D model for quotations, so it’s a differentiator. Also, it helps customers visualize the final system better than a 2D drawing. Not every bid is accepted, of course, so efficiency is critical.”

It was clear that creating a conventional parts library was not feasible for GARANT-Filter. A single pipe part, for example, has 57 nominal diameters and can intersect in a branch arrangement at any angle from one to 90.

“That works out to more than 16 million possible configurations,” Mussler says. “It just wouldn’t work to map out all of these possibilities in a parts library. But with the iLogic configurator, we can create custom solutions in a simple and time-saving way.”

Mussler had a vision for how to generate their models as quickly as possible. Specifically, he developed an add-in using iLogic in Inventor, the rules-driven technology that automates the creation of custom configurations. The workflow usually starts with 2D drawings from the customer, combined with measurements taken on site. Once the entry points for piping are confirmed, Mussler can begin creating the piping network with an eye for potential collisions and then calculate the pipe dimension based on the flow rate of the system. Using the iLogic add-in, he can easily configure the components, which populate automatically depending on which one is selected first. 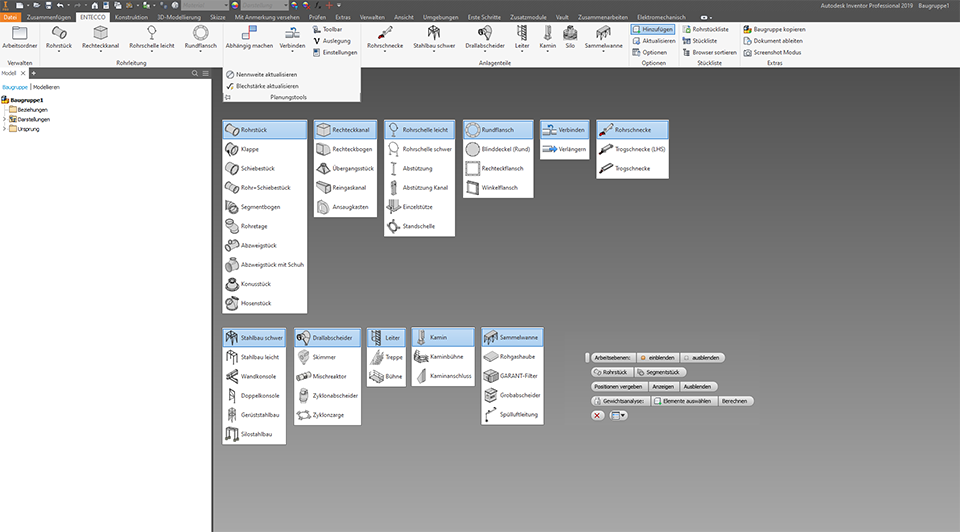 “The connections in the assembly happen automatically,” Mussler says. “When I choose one part, the next one comes up automatically, and its parameters, such as the pipe diameter, are inherited from the previous part.”

Mussler started building this add-in in 2012 with 15 iLogic configurators. Today, he has more than 50 configurators and can produce a 3D model of a very large, custom system within a couple of hours—which is approximately four to five times faster than the manual approach.

“Our 3D models are very important to our sales process, and at times they need to be delivered very quickly,” Mussler says. “We also need to make sure the model is accurate and that it looks good, so we can win more business. iLogic in Inventor helps us do all of this.”

"Our business depends on finding a perfect solution for the customer, and in our industry that means providing highly customized assemblies. In other words, we are not selling stock items. To stay competitive, we had to automate the process. Many of our competitors don’t create a 3D model for a quotation, so it’s a differentiator for us. Also, it really helps customers visualize the final system better than a 2D drawing. Not every bid is accepted, of course, so efficiency is critical."

Keeping track of all the details

Mussler not only developed the configurator, but he came up with a unique way to build assemblies that can be sent to customers without including their proprietary information. Instead of placing the master component in the main assembly, the program creates a lightweight version of the configured part that can be modified using the iLogic form from the master component. This process helps with large assembly management, and the assembly can easily be shared directly with anyone, because there is no proprietary information contained in the lightweight part.

From this point, Mussler relies on Autodesk Vault to automatically name the file and create a project folder within a standard file structure that helps the job move from basic to detail engineering after the sale is completed. Sales can then access the 3D model to quickly produce a bill of materials and calculate pricing for customers. 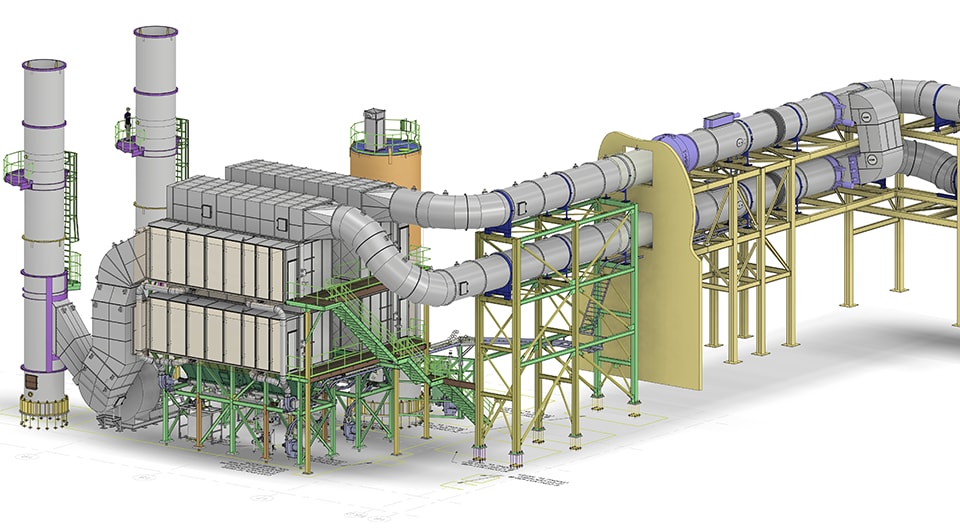 Overall, GARANT-Filter has achieved considerable time savings. The company creates between 20 and 30 of these 3D models every month, and Mussler is solely responsible for them.

“Without Autodesk Inventor and the add-in we created using iLogic, we would need at least two more full-time people to achieve the same level of efficiency,” he says. “Using the Inventor add-in helps me concentrate on the design process instead of naming files and saving them properly,” he continues, “The add-in takes care of all that automatically.”

Looking ahead, GARANT-Filter is focused on finding additional ways they can provide a better experience for their customers by utilizing other tools in their subscription to the Product Design & Manufacturing Collection. For special orders with a large budget, they present the system in virtual reality. This capability has greatly impressed their customers with walk-throughs and inspections of their system in advance, and the size dimensions are represented in a more compelling way.

Using Navisworks Freedom, extremely large designs can be sent for review to open on any computer that has Navisworks Freedom installed. This free application enables walk-throughs and measure tools that their customers can access on their own. 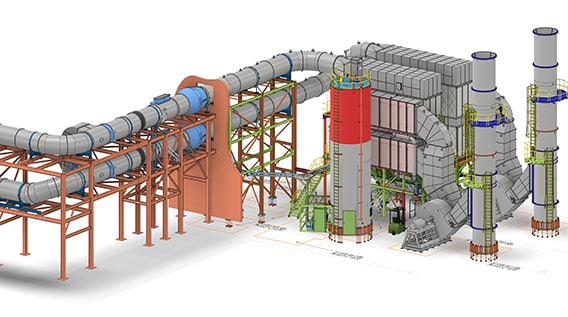 Lastly, ReCap helps ensure a smooth transition from the design to the manufacturing and installation process. Using a 3D scan, GARANT-Filter can manage interferences between their design and the existing building. This saves the time it would normally take to manually draw the facility. It also saves on cost for avoiding unexpected issues that are often ignored during the modeling process.

“At GARANT-Filter, we always use the latest technologies,” Mussler says. “When it comes to CAD, we rely on Autodesk Inventor in the collection. With this tool, we are super fast and can deliver a 3D layout to our customers within hours,” he concludes.