“Autodesk Revit allowed us to communicate detailed design with the entire team efficiently. Mercy Health is the real beneficiary, however. They will be able to bring the new West Hospital online much faster, which means it will be servicing their community—and, in turn, generating revenue—sooner.”
-- Joe Ferdelman, Senior Principal, Heapy Engineering.

Heapy Engineering is nationally recognized for its leadership in sustainably based mechanical, electrical, and plumbing (MEP) and technology systems design, as well as commissioning, planning, and energy services, and its involvement in more than 200 LEED projects. The firm, which has four offices across the Midwest, was recently selected to design all of the MEP/fire protection systems for Mercy Health’s new 250-bed West Hospital, a green field project being constructed on a 60-acre campus near Cincinnati, Ohio. Heapy Engineering had worked on other projects for Mercy Health, and was awarded this project following a formal request for proposals process involving several competitors.

Construction began on the 635,000-square-foot, US$180 million West Hospital in 2011. The facility will be home to a wide range of Mercy Health’s medical services, including a heart care center, cancer center, and women’s health center. Its crowning glory: a unique “prairie landscape” that will encompass two acres of the hospital’s east and southwest rooftops and provide a dramatic green view from the patient towers.

The facility is another green achievement Heapy Engineering can take credit for helping to bring to fruition—and in this case, even faster than anticipated. Among the many positive outcomes Heapy Engineering has realized on the West Hospital project by using Autodesk® software, the firm has been able to:

Mercy Health – West Hospital’s private patient rooms are designed to provide views of the outdoors, including of the building’s expansive green roof. Large windows will let in ample sunlight, creating a brighter, more open atmosphere in the patient rooms. “In healthcare, daylight is such a valuable asset—for patients and hospital stay,” says Joe Ferdelman, a senior principal and leader of the Health Care Group at Heapy Engineering, as well as the principal in charge for the West Hospital project. “However, in larger hospitals, it’s difficult to get light into diagnostics and testing (D&T) departments because they’re such big platforms.”

Early in the hospital’s design process, the architects, AECOM and Champlin Architecture, developed a physical model of a D&T space to show how the light problem could be addressed using “light wells.” As the Heapy Engineering team integrated the architect’s strategy into their design, they thought of a way to make the light wells serve another purpose for the hospital: routing for fresh air intake and relief air. Heapy Engineering’s team identified two light wells in the architect’s model that were best positioned for handling the hospital’s air intake and HVAC discharge needs. “The D&T area is a 100,000-square-foot floor plate with an all-green roof,” explains Daric Hess, a senior principal with Heapy Engineering and project manager on the West Hospital project. “We wanted to make sure everything looked elegant and clean. We honed in on the two locations we thought would be ideal and modeled them using Revit software.”

After creating the Revit models, the Heapy Engineering team quickly identified the key challenges in the dual-purpose light well strategy. The engineers were concerned that general exhaust from sources such as boiler flues and generators—and noxious exhaust fumes coming from the hospital’s nearby helipad—might adversely affect the quality of the intake “fresh” air for the hospital.

“The patient tower is right next to where we planned to create an intake,” says Ferdelman. “We realized that if the wind shifted, the tower could create a potential funnel, and all the air hitting it would likely go up and down. We needed to simulate what would happen around the air intake and discharge locations under all potential conditions, taking into account factors such as wind velocities and so on.”

Taking the models created in Revit and bringing them into Autodesk Simulation CFD software, Heapy Engineering simulated exterior air intake and relief air patterns. The results revealed the light wells originally identified as ideal for air intake were actually better suited as conduits for the relief air discharge, and vice versa. “We ended up completely changing which wells would be used for which purpose,” says Ferdelman. “These are enormous ducts—big enough for a person to run through. If we had not made that critical change early in the design process, fixing the problem later would have been quite expensive.” 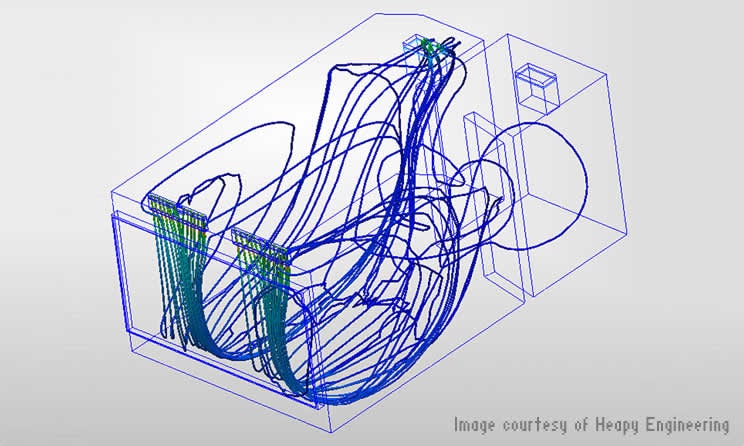 Heapy Engineering took advantage of the time frame it had been given to work on the Mercy Health – West Hospital project to coordinate with other parties, such as the contractor, to identify ways to save time and costs. As a result of these discussions, Heapy Engineering decided to explore a different approach to the construction of MEP systems to be installed along the hospital’s ceiling corridors.

“The MEP systems we were designing involved a lot of components—electrical conduits, ducts, plumbing piping, medical gases—all running along a hospital corridor,” says Ferdelman. “It was suggested we consider using corridor utility racks that would be built off-site in a warehouse as the building was being constructed. We started with developing the systems using this approach in Revit.”

Ferdelman says he was initially hesitant to build the MEP systems off-site, but admits the end result is hard to argue with: “With help from Revit, we were able to show how to build out the entire 250-room patient tower in a warehouse before the building would be topped out. They’re putting in these pre-assembled corridor racks as they’re constructing the rest of the building, and it’s saving months of construction time.”

“The corridor racks represent about 60% of the construction effort for the MEP systems for the patient floors of the hospital,” says Hess. “Since they were all prebuilt, and the hospital structure is now up, installation of more than half of the  MEP systems on an entire patient floor can be completed in only about a two- to three-week time frame. In addition to timesaving, there are safety gains because the time has been minimized for the contractors to work on these systems on ladders and in close spaces. Also, the number of crew members needed on-site for the installation process has been reduced. Building the corridor racks off-site has translated into cost, safety, and overall timesaving—it’s like prefab on steroids.” 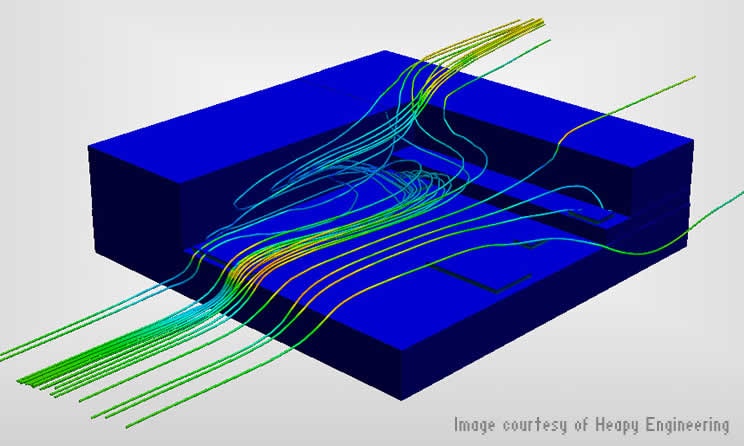 “Building the corridor racks o -site has translated into cost, safety, and overall timesaving—it’s like prefab on steroids.”

By using the prefabricated corridor racks for the MEP systems, the contractor has been able to reduce construction time on the Mercy Health – West Hospital project by several months. The contractor is now saving even more time and costs by taking a similar approach with the facility’s bathroom pods, constructing them at an off-site warehouse location.

“Autodesk Revit allowed us to communicate detailed design with the entire team efficiently,” says Ferdelman. “Mercy Health is the real beneficiary, however. They will be able to bring the new West Hospital online much faster, which means it will be servicing their community—and, in turn, generating revenue—sooner. That revenue ‘boost’ probably makes much more difference to the hospital than the construction cost savings.” 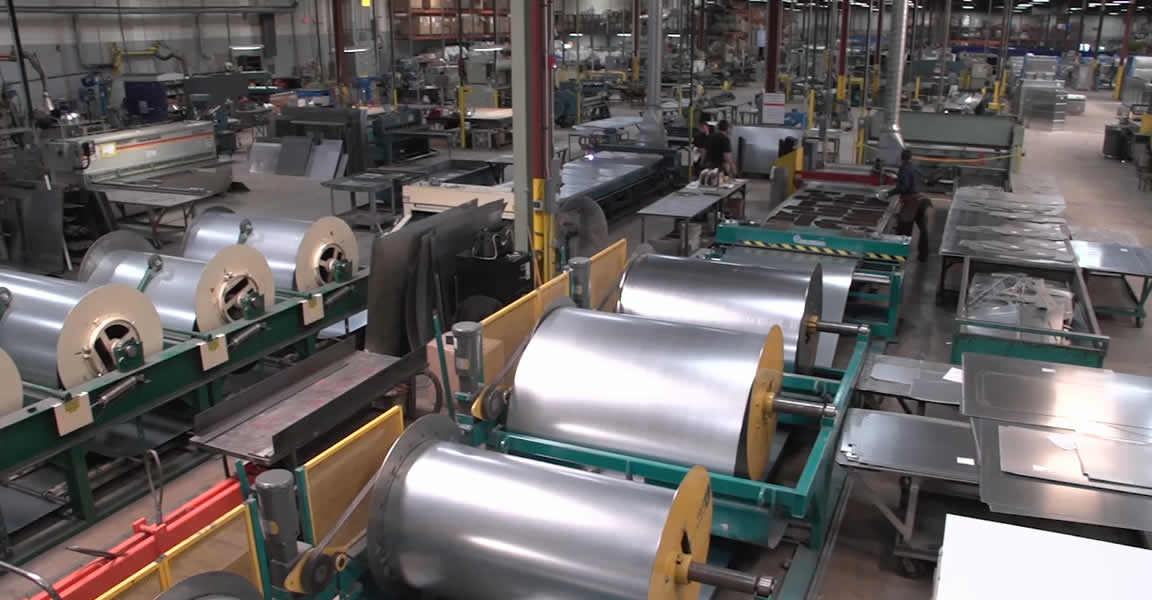 How the firm uses BIM to greatly improve process efficiencies and for competitive differentiation. 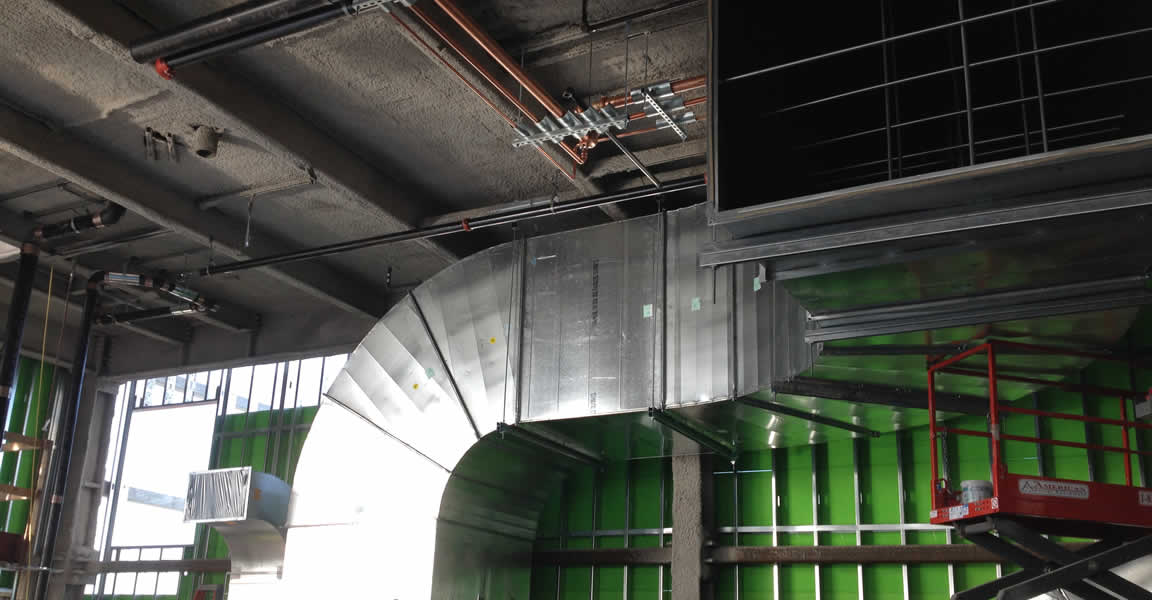 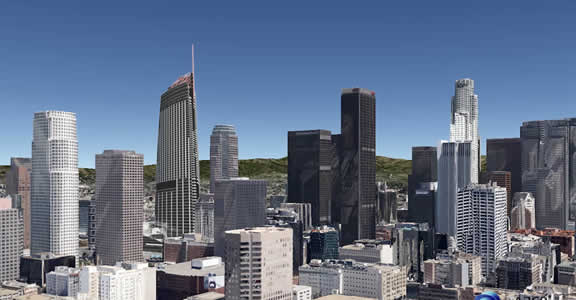 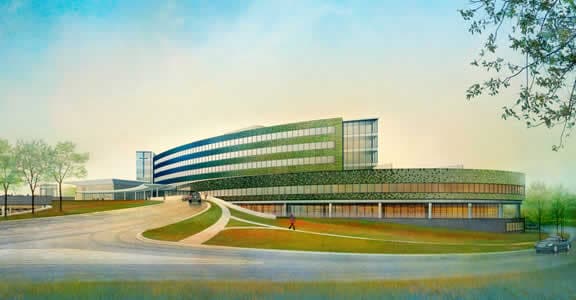