“The dynamic change at the time of designing which generates more options and choose best of the proposals is always the key to the smart businesses. Autodesk provides this ﬂexibility with end-to-end solution which keeps us ahead of the time.”
-- Dr. Vivek Kale,  Head – Geospatial, Kalyani Global

Pushing nature out of the built environment has always been a practice. But the mindset is changing—the building fraternity has begun to look at nature as an inspiration for building design. Here is a project set to change this juxtaposed submission of ‘other environment’ to ‘built environment’, by achieving equilibrium with the surrounding nature—Khed City.

A joint venture between Kalyani Group, Bharat Forge and Maharashtra Industrial Development Corporation (MIDC), Khed City is envisioned as a world-class community for scientific innovation and exceptional quality of life. The City, being developed in two phases, is conceived to be a place that nurtures a creative culture and promotes environmental stewardship to stimulate economic vitality.

Located approximately 2,100 feet above sea level, at the intersection between the Western Ghats and the Deccan Plateau, the site is predominantly on higher ground with an incredible view of the valley. The undulating and rugged topography in many areas makes it difficult and expensive to develop. Understanding the operating conditions of the site and establishing appropriate strategies to address those conditions were of prime importance to the developers. There was a need to create an urban context that not only synthesized the human need, environmental stewardship and economic viability, but at the Building a BIM city same time create a global model of urbanism where residents can live in harmony with nature.

Initiated within the framework of the then guidelines of SEZ development under a public private partnership, Khed City (envisioned to occupy about 5400 hectares (Ha) in all) is being developed in phases. The first phase of development underway accounts for 100 Ha as a Special Economic Zone (SEZ) that will cater exclusive to export-oriented industries; about 110 Ha for Domestic Tariff Area and nearly 1500 Ha of Integrated Industrial Area including the residential, commercial and support services areas as well as more than 25 Ha allotted for rehabilitation and resettlement of the project affected community.

It will also act as the urban center that caters to the creative class - organized around public squares, plazas and bazaars, in a contemporary format, yielding an urbanism that is both dynamic and familiar, connected with residential neighborhoods. This in turn will offer a wide range of housing and commercial options.

To ensure easy acquisition of such large tracts of land, non-agricultural and uninhabited stretches were chosen for the project, while keeping the environmental aspect in check. This, however, also brought in the inevitable challenge of the terrain, which mostly comprised of rough, undulating barren grass-land. To develop such a stretch of land, it was necessary to take aid of sophisticated technology, which would reduce the effort and time consumed in mapping.

In today’s environment it is necessary that pieces of technology being used must talk to each other and data from one product to another product must flow for the various stages from planning to maintenance. This should also maintain clarity, agility and continuity in its approval flow with an intelligent city model consisting 3D geospatial data, 3D building models, model based design of road network and provide bills of quantities at various stages with multiple design alternatives. It was also necessary to use dynamic technology which would complement the existing organizational workflow—from planning to maintenance of the city. The standard was set to use a blend of Building Information Modeling (BIM) & GIS systems to address the needs of the planning stages, final project delivery and the maintenance phase ahead.

The technology would be used across disciplines, which included town-planners, architects, hydraulic engineers, environmental engineers, design consultants, road engineers and structural engineers—and this made the need for interoperability and data copying without data loss a critical challenge.

The data includes 3D terrains, 3D building models from Revit, 2D GIS data, satellite images and CAD data. The decision was to make a repository of spatial and non-spatial data in a land database. With this data storage, the next stage was to go live on the Web services with spatial data, which provides flexibility in allotment, and easy ways to accurately maintain and access land data. The biggest challenge was to visualize the city with multiple design options and data from various sources that would help stakeholders take decisions based on proposal building exercises. Another determinant factor was Streamlining the complete design workflow. Image courtesy of Kalyani Group. cost-control due to the tight budgets and stringent technical guidelines.

The challenging topography resulted in very high level of land grading, which would have seen costs spiral out of control at the start of the project itself, had it not been for Infrastructure Design Suite. This in turn meant that the plans had to be such, that the terrain features, which often included steep slopes on the boundaries of the acquired land, must be incorporated as an integral part of the developed landscape and not create a hindrance. 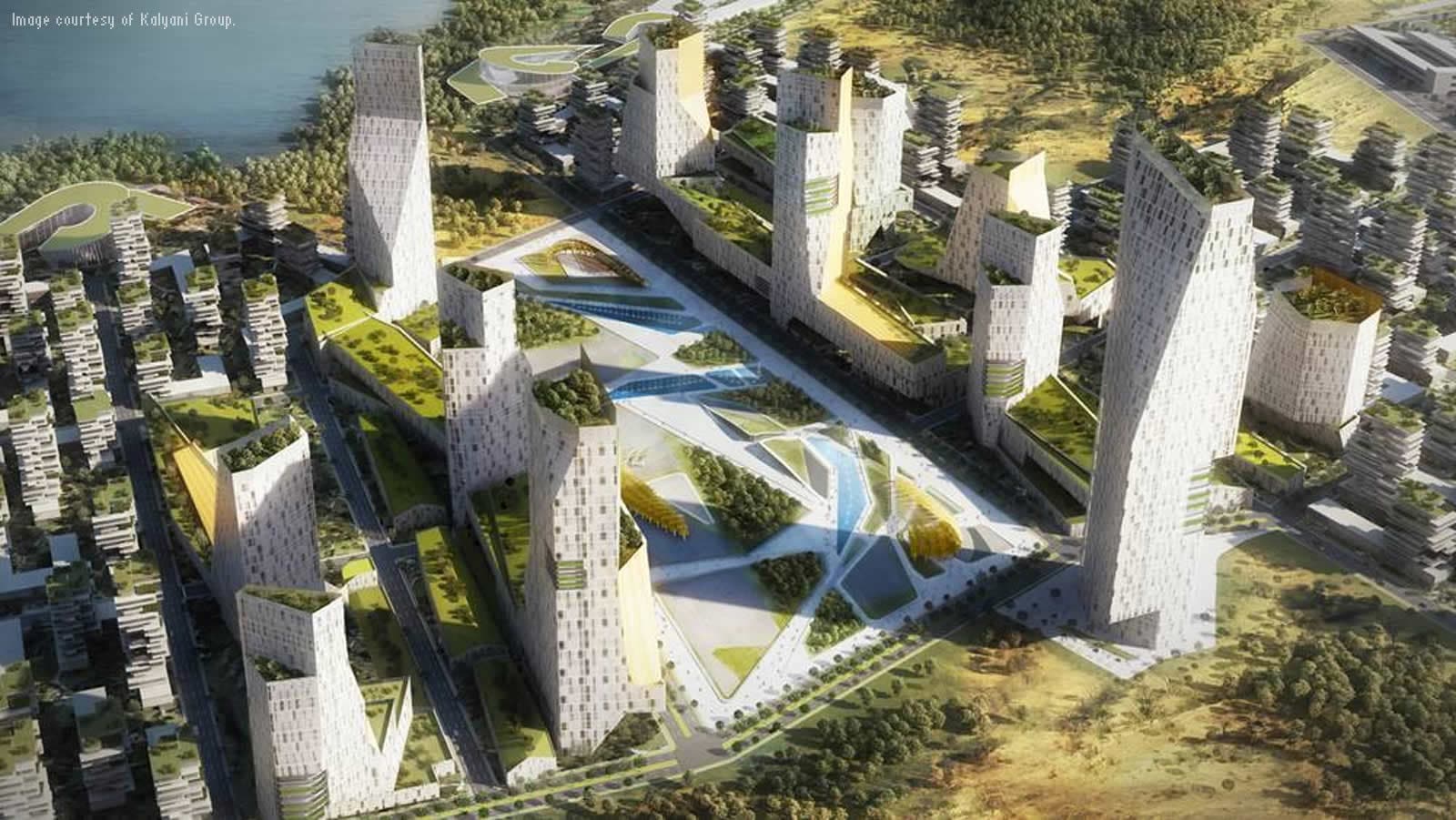 The challenging topography resulted in very high level of land grading, which would have seen costs spiral out of control at the start of the project itself, had it not been for Infrastructure Design Suite. This in turn meant that the plans had to be such, that the terrain features, which often included steep slopes on the boundaries of the acquired land, must be incorporated as an integral part of the developed landscape and not create a hindrance. 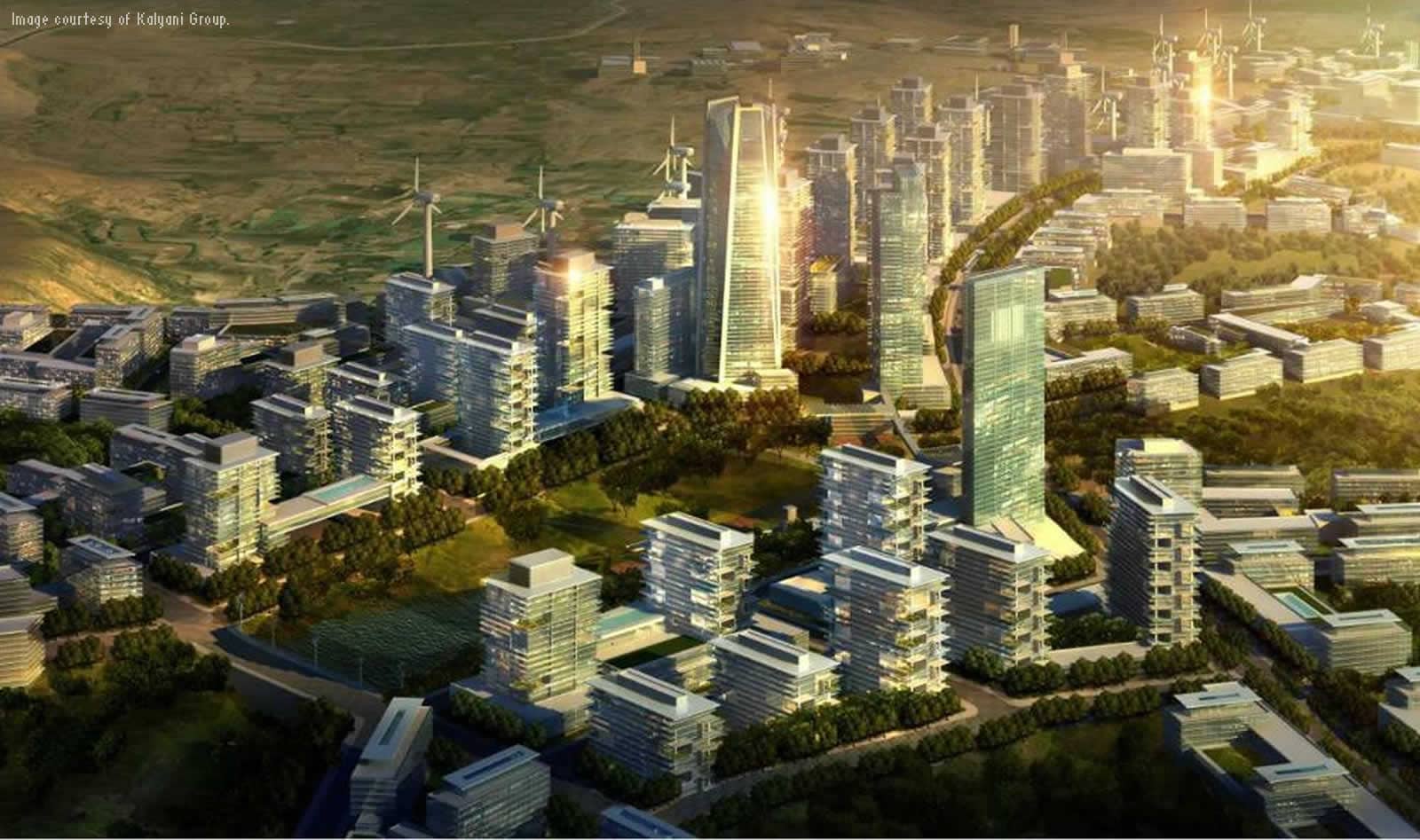 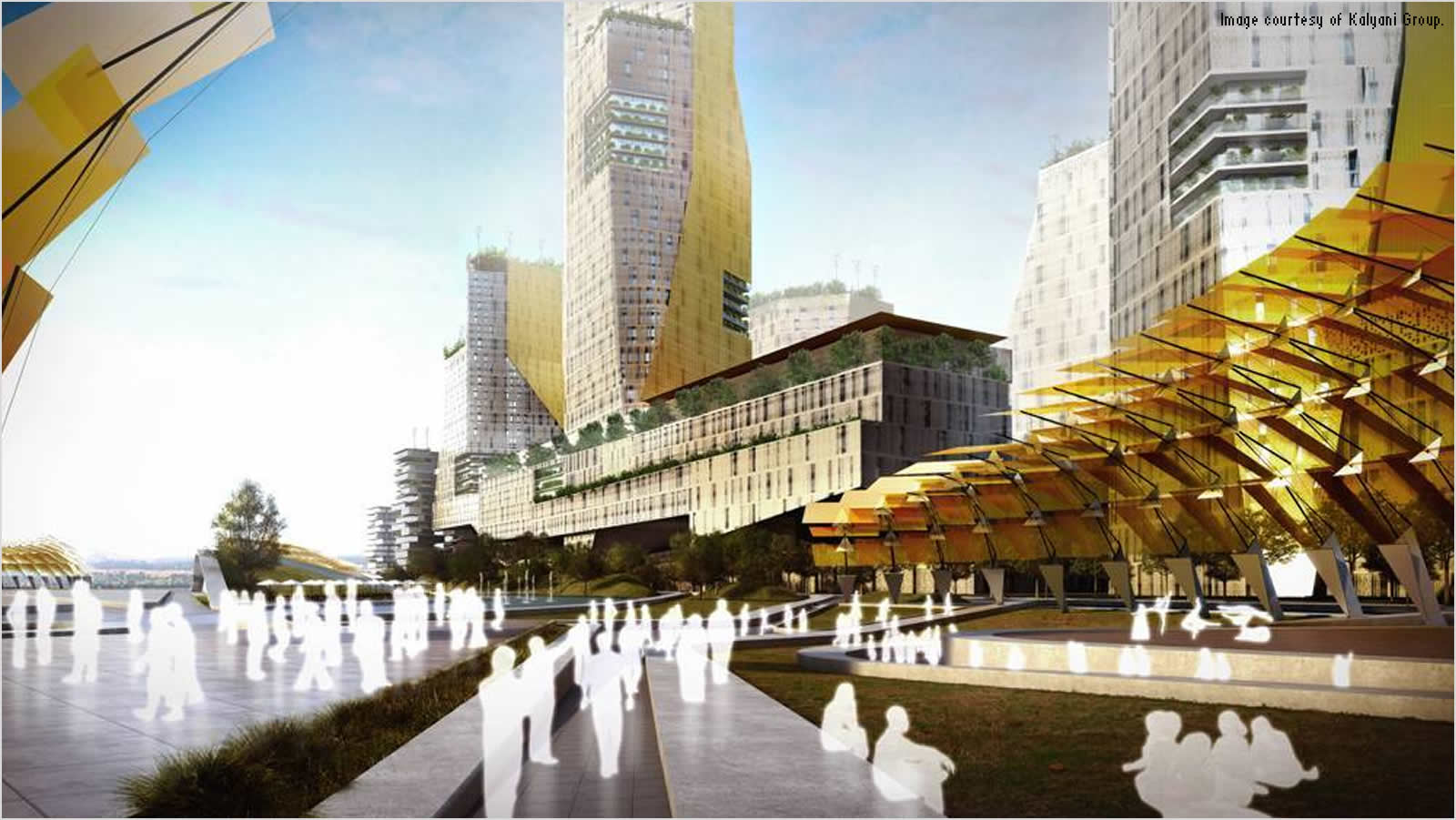 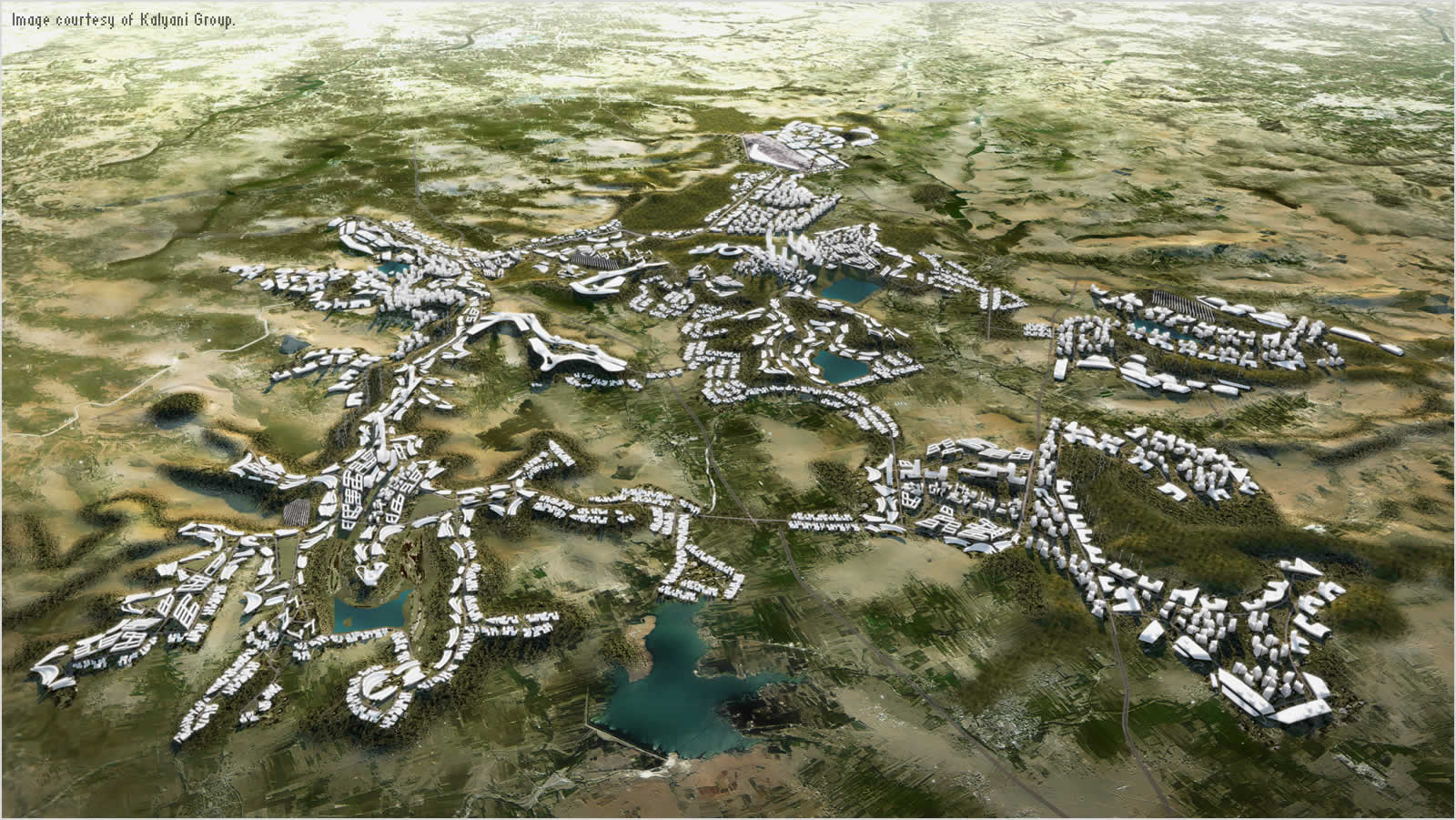 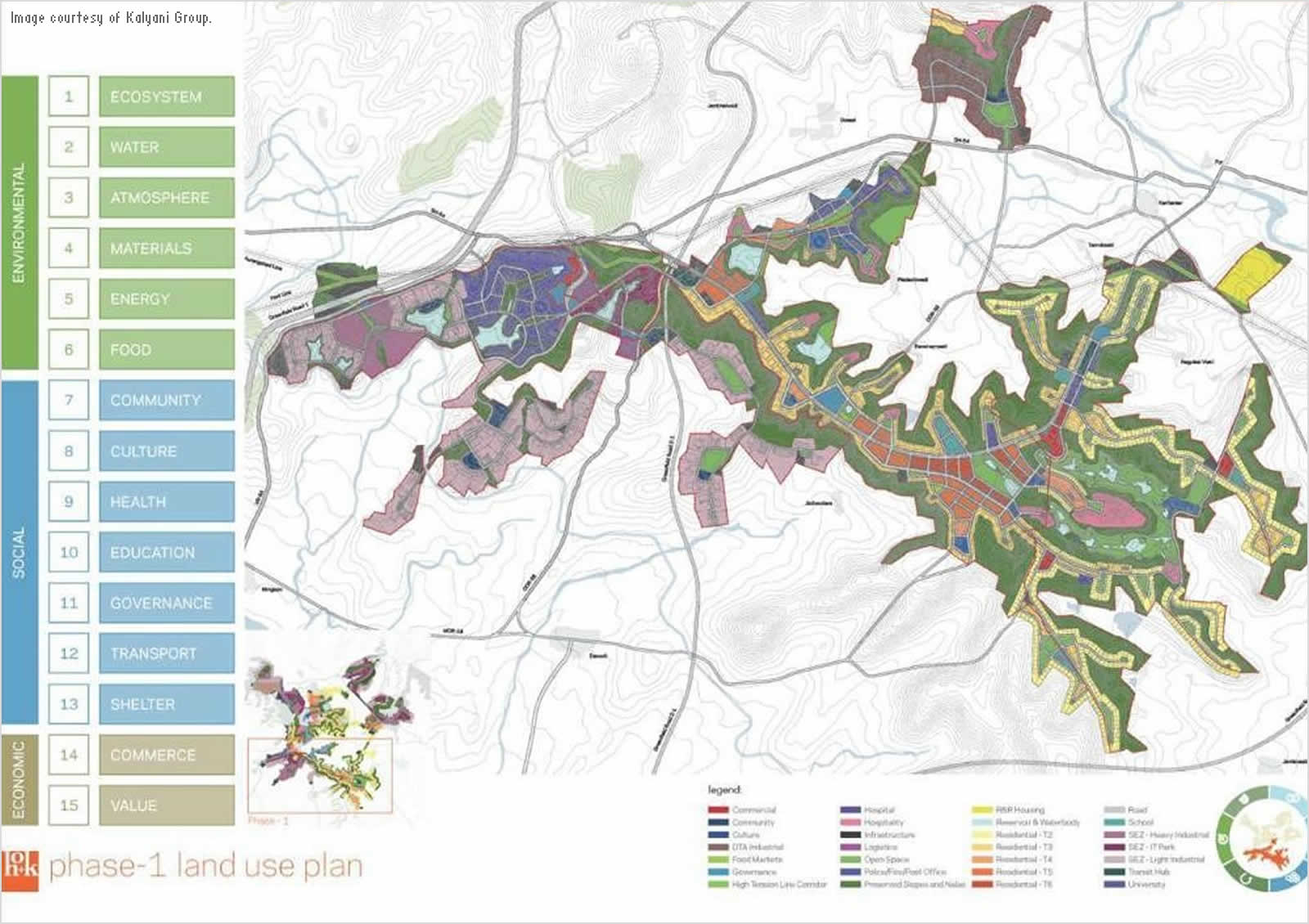 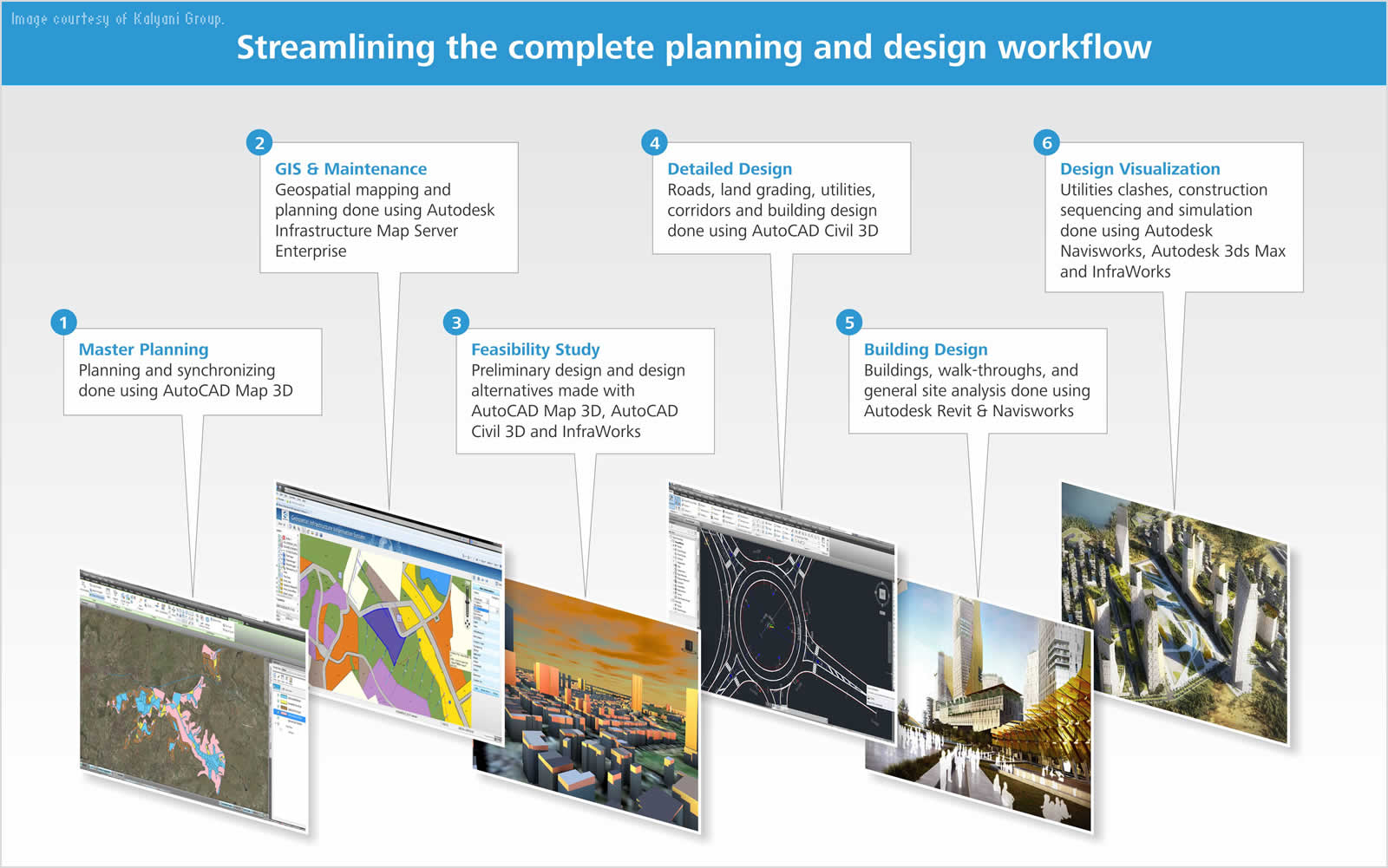 Complex jobs like grading, road design, utility design, clash detection and early visualizations were done using Map 3D, Civil 3D, Infraworks, Navisworks and 3ds Max Design, which are all a part of the design suite. “The support provided by the team at Autodesk was unparalleled—they were the backbone of helping us deploy the technology platform across various teams involved. The visualizations along with the engineering data created in the Suite are stunning and conveys the design intent in much effective way to the stock holders and to the common people”, said Yogesh Zope (CIO, Kalyani Group) Pune, India.

The primary road block and concern faced by the lead team was interfacing with the external agencies and government organizations. Their latency and resistance to technology had to be overcome by scaling down the outputs from the platform to their level of working. For this, the lead team had to learn the language of the town-planners and contractors. Now the challenge was to get everybody on the same plain and start grading a rough, undulating terrain. Publishing the data on the web and sharing with the key set of people was resolved by Infrastructure Map Server. The strong, dynamic Web GIS platform held large data like satellite images, DEMs, contour maps and complex land data. It helped manage viewing options on the fly and file sharing with the various teams. This server based solution was key to help internal and external teams track the progress of project and land management across the stake holders.

Integration of Map 3D software has helped to improve quality, productivity, and asset management. Khed City will be the first ever integrated township with precision planning, thanks to the Kalyani Group, which believes strongly that technology is a cost that yields manifold return. It is expected to attract investments of about 25,000 crore and generate 120,000 new employment opportunities. In short a huge asset to the country and to the state.

“One interesting aspect of recent technology advancement is the ability and capacity of different and diverse systems, data, platforms, processes and services to efficiently and effectively work together brings forth. Khed City is a landmark project, and with this comprehensive solution from Autodesk for our planning, designing, building and infrastructure management, it is all set to become a new exemplar for enhanced infrastructure development,” said Dr. Vivek Kale (Kalyani Global) Pune, India. 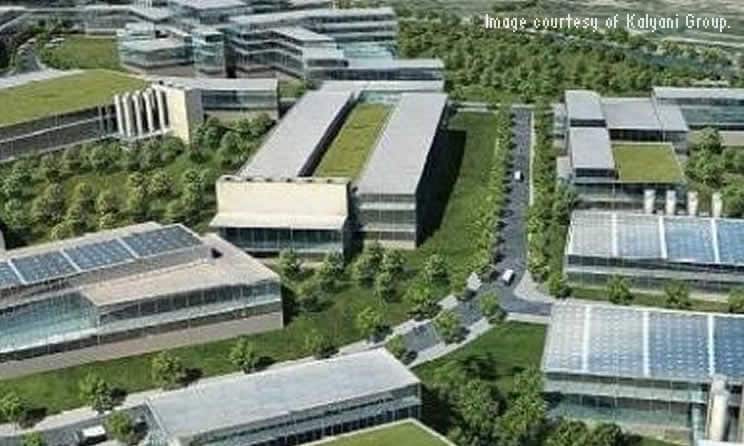 The Processing Zone will provide the base for employment focused on export-oriented non-polluting industries and R&D facilities.

The Kalyani Group, established in mid-1960s, is an Indian multi-national with high tectonology, engineering and manufacturing capabilities across several sectors such as Automotive, Oil-&-Gas, Locomotive, Marine, Aerospace, Construction and Mining, With footprints across India, Germany, Sweden and China, the Group has an annual turnover in excess of Rs. 12,000 crores (~> US$ 2.0 Billion); and a market capitalization of its listed entities exceeding Rs. 15,000 crores. The Kalyani Group with a strong emphasis of market leadership through technology; has Joint ventures with FAW Corporation (China) Arvin Meritor (USA), Carpenter Tech (USA), Hayes Lemmerz (USA), Gerdau SA (Brazil). Guided by visionary leadership of Mr. B.N. Kalyani (the Group Chairman) the 13,000 strong engineering workforce globally, the Group is a market leader in all its respective business segments. Virtually every automobile manufactured in the world has at least one component having a “made by a Kalyani Group (often its flagship, Bharat Forge Ltd) company” marking. 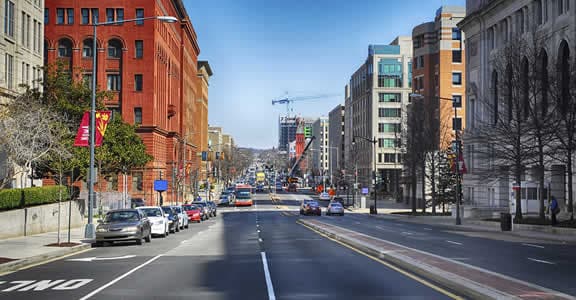 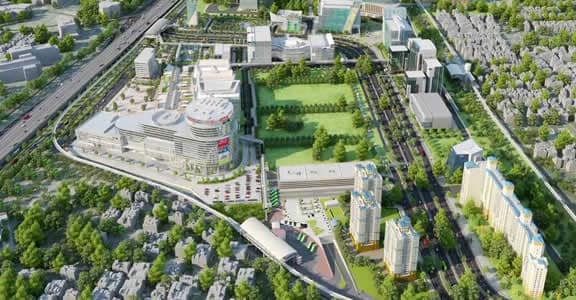 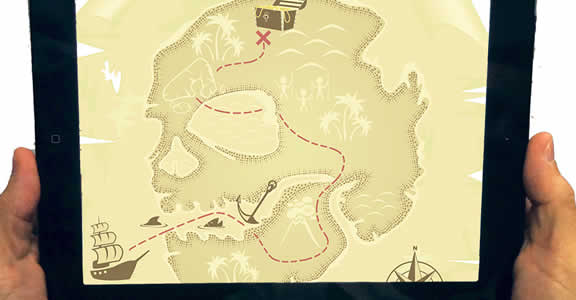 VTN Consulting created an above- and below-ground facilities information model for the city of Las Vegas to support urban planning and cross-agency coordination. 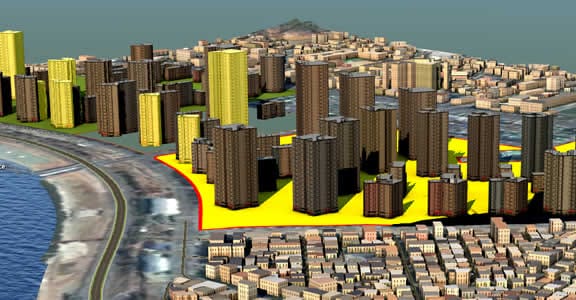 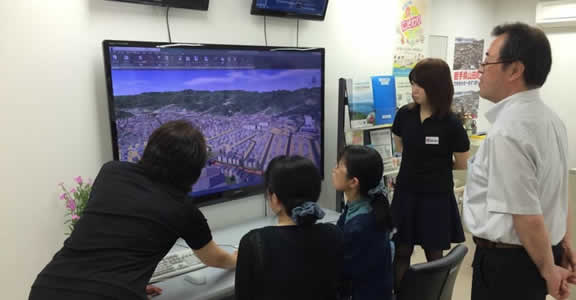 From bridges and tunnels to earthworks: Obayashi's infrastructure strategy depends on BIM at nearly 60 worksites. 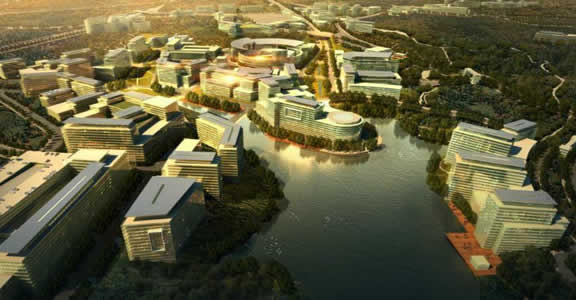