“Intelligent, data-rich models of existing buildings will help us organize and access the information we need to do our jobs and get that information to the people who need it in a timely fashion. Revit software will help us better maintain our assets, make our staff more productive, and enable smarter building operations.”
—  Steve Hyde, Energy/Facility coordinator, Facility Planning and Development Group Bronson Healthcare Group

Bronson Healthcare Group, located in Kalamazoo, Michigan, is a not-for-profit healthcare system serving southwest Michigan and northern Indiana. Bronson operates three hospitals that total 3.1 million square feet. Several years ago, after decades of working with hardcopy drawings and 2D computer-aided design (CAD) files, the organization began investigating the use of BIM for its building renovation and construction projects, and to support its ongoing facilities management, operations, and maintenance.

“We felt sure that the benefits of BIM would be worth its costs, but we had to exercise due diligence and prove the value of BIM to our executive team,” says Michael DiFranco, manager of facility planning and development for Bronson. “So we embarked on a BIM pilot project to demonstrate the ROI for future build outs and, at the same time, gain support from our construction teams.” For the sake of comparison, Bronson decided to use BIM on a new renovation project slated for Bronson Methodist Hospital. The area to be remodeled was directly adjacent to a recently completed renovation project that was built using traditional processes and CAD software. The completed project was a $3 million renovation to construct four catheterization labs that was finished in May 2009. The new project, which started in early 2011, was a $1.7 million renovation and addition of a 13-bed prep/recovery unit (PRU).

Bronson had 2D drawings of the existing facility, but was concerned about the accuracy of those drawings—particularly in crowded space above the ceiling. Furthermore, reliance on those 2D drawings for coordination and clash detection would counteract the advantages of using BIM for design and construction of the new space and buildings systems.

The project architect and engineer of record, Diekema Hamann, was already using Revit Architecture software to design the renovated space. Bronson also tasked Diekema Hamann to develop a Revit as-built model of  the existing area and add the major building systems to the model as the project progressed. Throughout design and construction, the extended project team relied on this intelligent 3D model for more accurate project coordination. 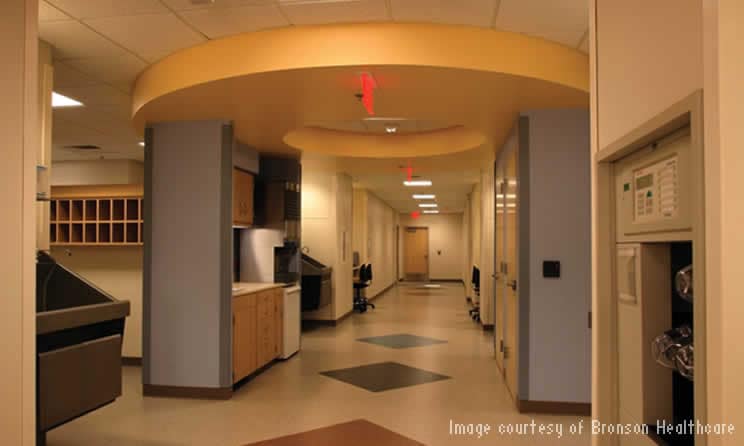 To prepare for BIM and get advice on the pilot project, Bronson turned to Kal-Blue, a local Autodesk channel partner that specializes in solutions and services for building lifecycle innovation. Kal-Blue has been an early advocate of extending BIM to a building’s operational phase. “BIM is transforming the design and construction of buildings, and is being widely adopted by the AEC industry. But there’s a disconnect when it comes to building owners,” says Christopher (Kip) Young, President & CEO of Kal-Blue. “We help owners understand how new processes like BIM can improve the entire building lifecycle.”

Kal-Blue works with owners like Bronson to develop a plan specific to their needs and communicate those needs to their architects and contractors, streamlining the data transfer during project delivery. In addition, the firm helps owners use BIM to support facilities management, operations, and maintenance.

The first order of business was to create a plan for using BIM on the pilot project and future projects, as well as the development of longer-term plans for using BIM for lifecycle management. Kal-Blue worked with Bronson to define the BIM goals and the deliverables for a capital project. The plan outlines requirements for each party including software and hardware requirements, and provides information regarding collaboration site usage, file naming conventions, model accuracy and tolerances, level of development definitions, and even MEP color-coding.

Get the team onboard

To promote team building and develop trust between all these players, Bronson gathered them all around a table at the beginning of the project to discuss the use of BIM. “The BIM fee for the prep/recovery unit project was about $40,000, so we wanted to make sure that everyone was on-board with BIM,” says Steve Hyde, an energy/facility coordinator within Bronson’s facility planning and development group. “After the meeting, the teams agreed to reduce their contingency fees based on the prospect of a more coordinated project, delivered under budget and ahead of schedule.”

Bronson’s BIM plan specifies that the architectural firm maintain a virtual building model throughout every project, reducing the potential for information loss at handoffs and creating a more consistent process. The plan also calls for the architectural firm to use the building model for project coordination and clash detection, which has long been recognized as one of the biggest benefits of BIM for design and construction.

Some of the existing building systems running through the PRU would not need to be changed during our remodeling effort, while others would be demolished and replaced, but would still need to tie into existing systems,” explains Hyde. “For more reliable and accurate project coordination, we needed a multi-discipline 3D building model.” This model needed to include the existing architectural, structural, and building systems in and around the renovation area, as well as all the new building elements required for the PRU.

Diekema Hamann started with its Revit-based design model of the remodeled space. Next, the firm used Revit Architecture to create an as-built model of the area based on existing 2D AutoCAD layouts. In addition, the team opened up walls and ceilings to field-verify the accuracy of the layouts, particularly in problematic above-ceiling spaces. Using data from both laser scans and hand measurements, the team adjusted the model to bring the existing elements within tolerance. Then throughout the course of the project, Diekema Hamann modeled the major building systems based on design and fabrication drawings supplied by the general contractor. 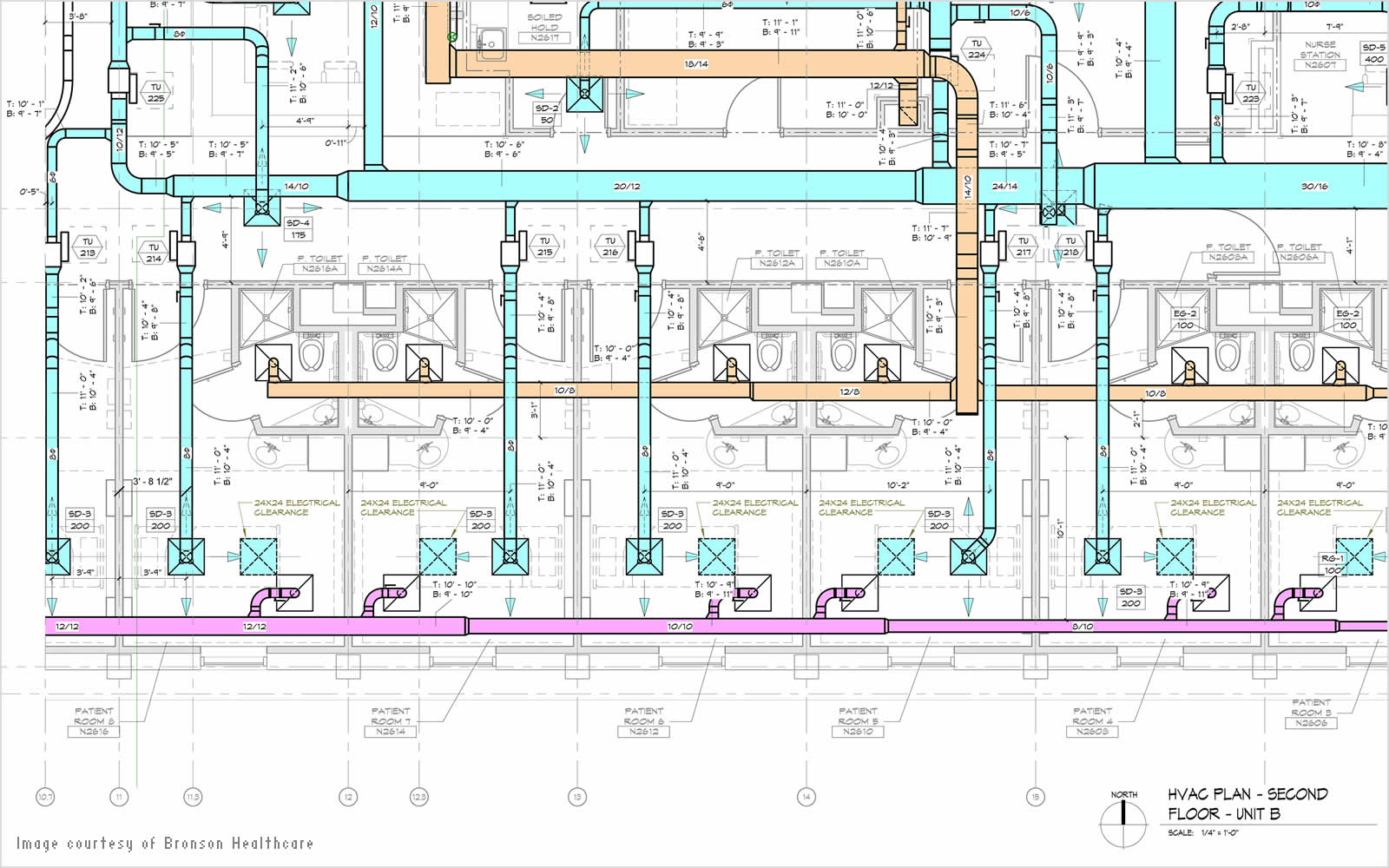 The PRU project was completed ahead of schedule and under budget, and metrics from the project enabled Bronson to perform a head-to-head comparison of the adjacent renovation projects—the PRU project using BIM and the catheterization labs project using traditional processes. Since

both projects were adjacent to the same occupied space and similar in scope and complexity, the results from the two projects proved to Bronson the business value of BIM for its facility upgrades and renovations.

The CAD-based catheterization project was  2.6% (approximately $80K) under budget. The contingency value spend was 7.4% and the MEP field coordination spend was  3%. There were 19 change order requests and no reduction in construction time. Bronson reports that these numbers are typical for a CAD project of this size.

Whereas on the PRU project, BIM and Revit software helped Bronson almost quadruple its savings. The project was almost $160,000, or  9.2%, under budget. The contingency value spend was only 1.9%, due to the upfront coordination work within the field and between trades. The MEP field coordination spend was only 0.01 percent, representing just $1,700 on the $1.7 million project. There were only five change order requests and the project was completed three weeks early. In addition, the PRU supports the catheterization labs and, as a result, the early completion of the PRU resulted in $1.4 million in additional revenue for Bronson from those labs. 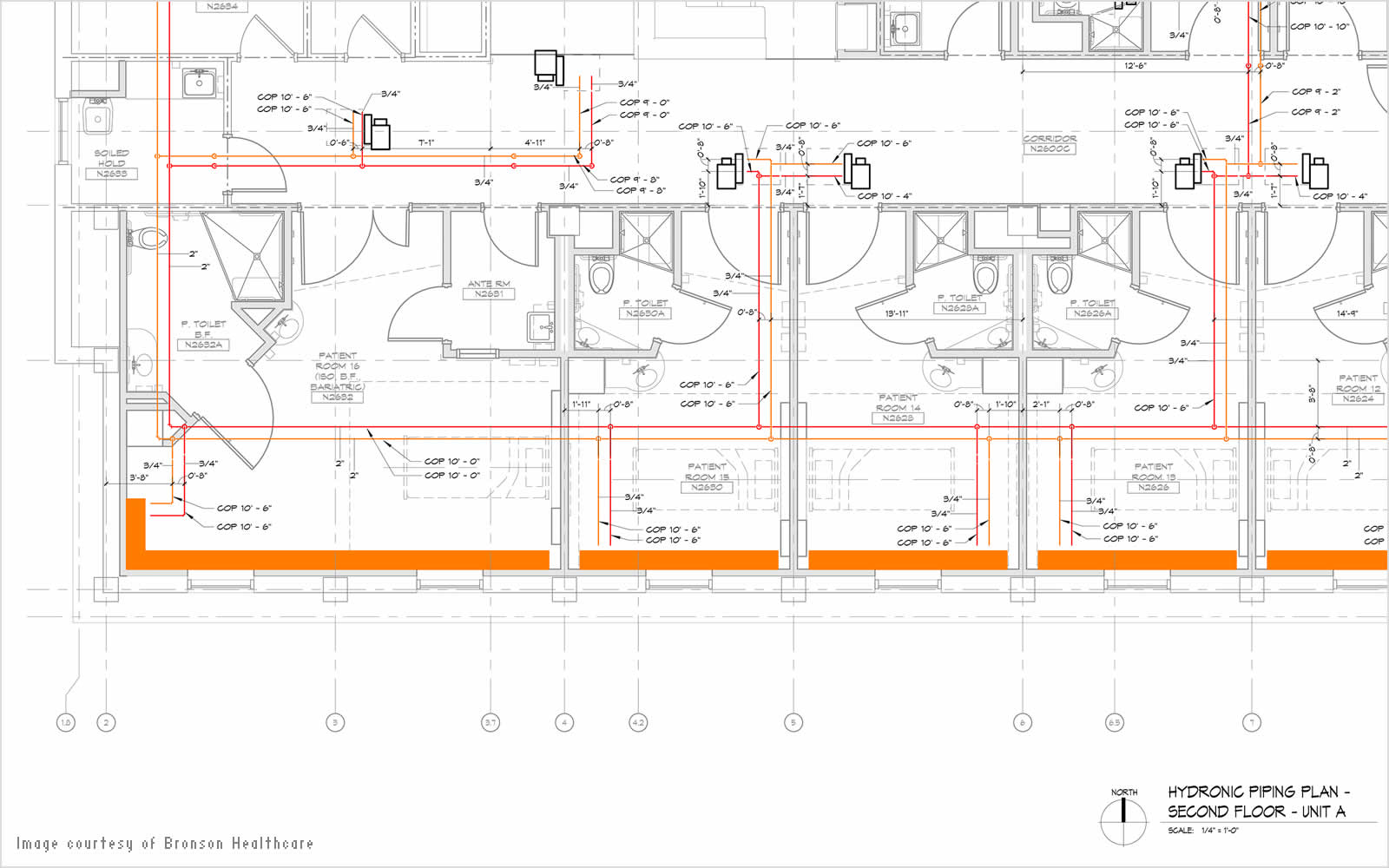 Bronson’s successful use of BIM and Revit on the PRU has expanded to larger projects, including a recently finished $5 million construction of a 25-bed unit at the Bronson Methodist Hospital. The work was done directly below a neonatal intensive care unit and, as a result, had to be done as quickly as possible to minimize disruption. Revit was used to complete the MEP coordination during demolition, which helped shorten the timeline. Furthermore, the trust earned on previous projects enabled Bronson to work with the HVAC contractor to decrease its bid by more than $100,000, and convince the construction management firm to reduce the contingency from 8% to 2.5%. The changes saved Bronson approximately $350,000 off the top of the project. 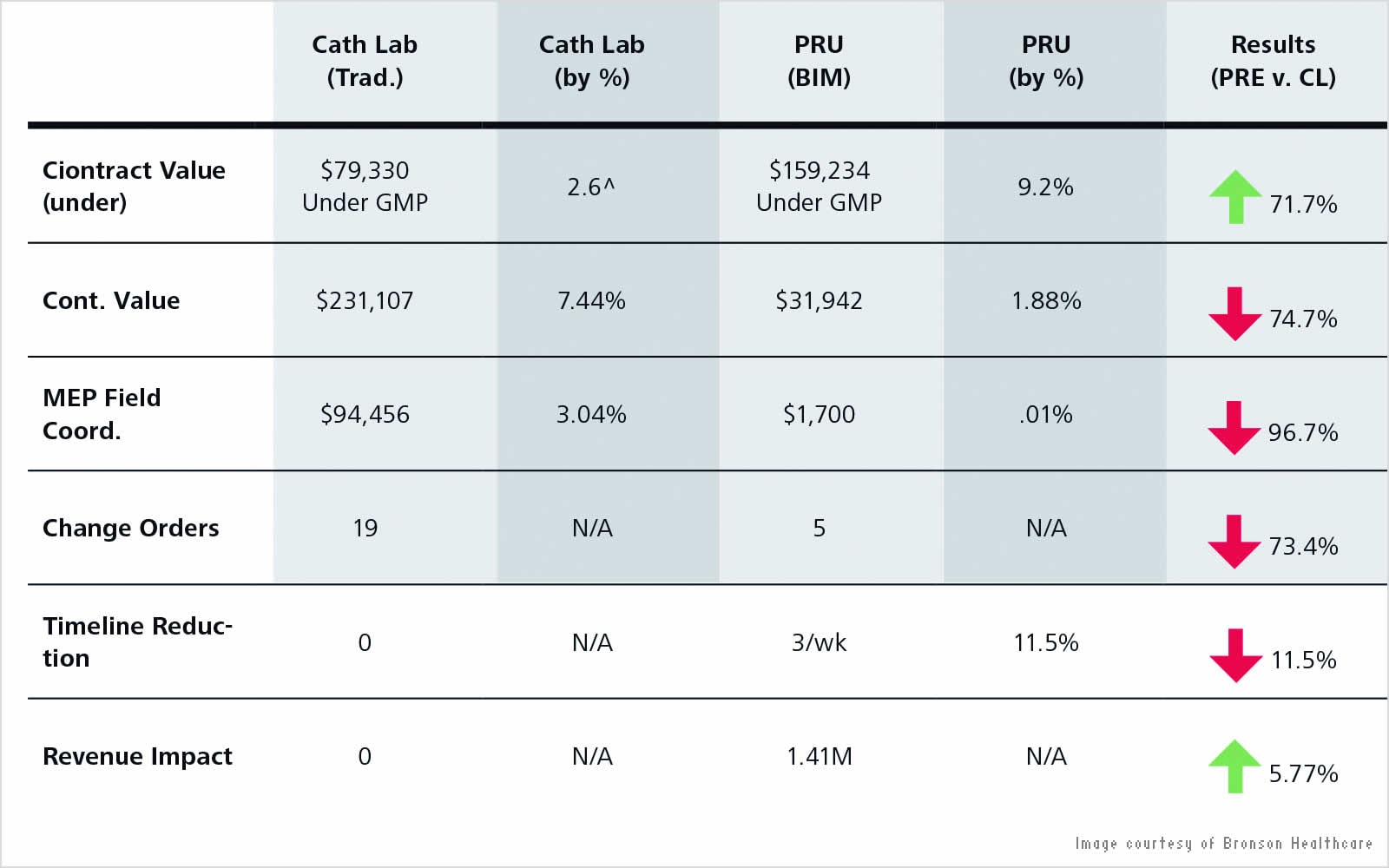 The resounding success of the pilot project—completed ahead of schedule and under budget— proved to Bronson the business value of BIM and Revit software. “All our future projects will utilize BIM,” says DiFranco. “We see BIM as a key to reducing our lifecycle costs.” In addition, Bronson is using Revit as a visualization tool, helping project stakeholders better understand how a finished project will look and making it easier for the organization to secure buy-in on the project. Bronson’s future plans for Revit include using the software to assist with space planning, move management, facility maintenance, work order efficiency, and asset tracking.

The success of the PRU project also convinced Bronson to launch a campus-wide BIM Execution Plan, using Revit software to create as-built models of all existing buildings and integrating that information with operations and maintenance systems. “Intelligent, data-rich models of existing buildings will help us organize and access the information we need to do our jobs and get that information to the people who need it in a timely fashion,” says Hyde. “Revit software will help us better maintain our assets, make our staff more productive, and enable smarter building operations.”

“With our test BIM project coming in three weeks early on a six-month schedule, we feel that Revit is a tool to reduce our downtime and to provide a safer, quieter, and more comfortable healing environment for our patients and their families,” concludes DiFranco. 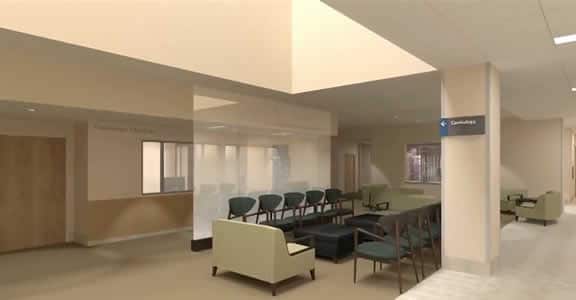 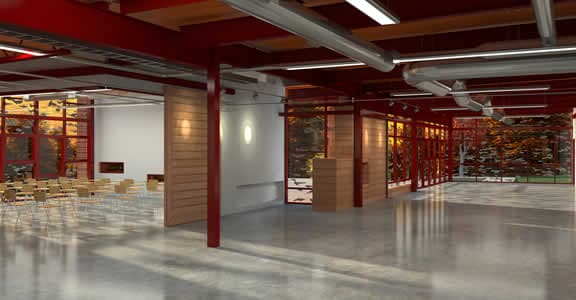 The Business Value of BIM to Owners

How BIM helps building owners save time and money throughout the building lifecycle. 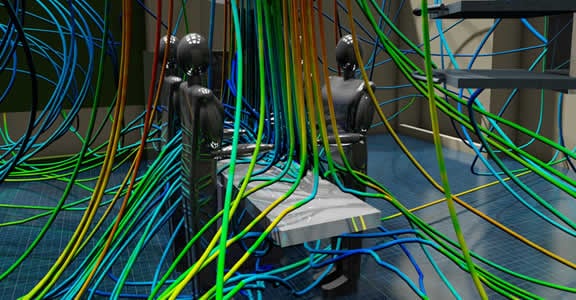 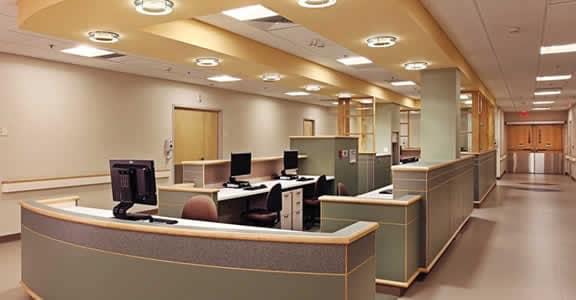 Bronson Healthcare Group proves the value of BIM from an owner's perspective on a hospital renovation project.