San Francisco’s sinking, leaning Millennium Tower is one of the latest and flashiest examples of a common challenge in large infrastructure design and construction: subsurface geotechnical analysis.

There have been a lot of questions, blame, and speculation swirling around the tower’s settlement: What enabled such an expensive structure to sink 16 inches in seven years? Was it because the developers built an inadequate foundation? Or was it caused by the dewatering of the Transbay Transit Center site next door?

According to the International Society for Soil Mechanics and Geotechnical Engineering, “anything that is not supported by soil or rock either floats, flies, or falls down.” And as stated by the National Economic Development Office’s longstanding “Faster Building for Commerce” report, more than a third of over-budget construction projects cite unexpected subsurface conditions as a major contributing factor. But with their analyses of rock and soil mechanics, geotechnical engineers can prevent major construction issues or worse—catastrophes.

Chandler and fellow co-founder (and technical director) Gary Morin are evangelists for a basic and inexpensive solution to prevent geotechnical problems. “Many organizations, private and public, already have enormous archives of data from boreholes and other investigations,” Morin says. “But they’re in relatively inaccessible forms, such as PDF reports and GIS layers, and just finding this data can be difficult—let alone presenting it in ways that are useful to engineers and consultants. And that’s unfortunate because, let’s face it, boring holes is expensive.”

Morin and Chandler are saying, in effect, that there is substantial “buried treasure” in and around construction sites—in the form of expensive geotechnical data that’s already been gathered—and all that’s needed now is better treasure maps.

For obvious reasons, early use of 3D CAD techniques focused on buildings—the “B” in BIM. Buildings, bridges, tunnels, dams, and other infrastructure are relatively easy to see and measure, and not terribly difficult to construct as models. They’re the visible part of the infrastructure iceberg. But like icebergs, aboveground infrastructure rests on a massive substructure of utility lines, foundations, drainage structures, and soil.

As BIM matures, more of these critical underground assets and challenges are being incorporated into model-based design. It’s no longer remarkable, for example, to have accurate visualizations of underground utilities included in design-phase modeling, or even in preliminary models.

Keynetix is working at the current frontier of BIM software, with the visualization of subsurface data provided primarily by potentially deep, expensive boreholes. Transport for London’s proposed new Silvertown Tunnel is a beneficiary of their work.

“This is a tunnel running under the Thames, in a highly industrialized area, and soil conditions are obviously critical,” Morin explains. “In this case, Atkins, the consultants working on preliminary design, knew they already had borehole information, and our software helped them to visualize it usefully.” 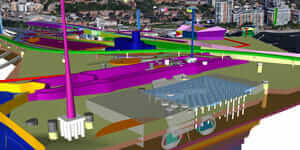 Ironically, the conditions that make borehole information vital also make the drilling of new boreholes expensive and logistically difficult. So anything Atkins could do to reveal existing subsurface data and reduce the number of new boreholes needed would have major positive effects on the project’s cost and timeline. To make this happen, Atkins used a two-pronged approach:

1. Collation of All Available Geotechnical Data. This included gathering in-house data from previous Atkins projects in relatively inaccessible formats (such as PDF reports), and also identifying and incorporating data from historical and public sources, like old maps and plans. One goal of this phase was to put geotechnical data into already existing formats.

2. Presentation of Geotechnical Data in Easily Understood Visualizations. The important innovation here was a comprehensive BIM that showed all known existing subsurface features. Autodesk AutoCAD Civil 3D was used to model and visualize existing cable-car foundations in conjunction with model data for the demolished gasworks foundations, warehouses, piers, and an old dock entrance. Compiled with the proposed tunnel alignment and other planned structures relating to the tunnel, the information was shared with other team members using Autodesk Navisworks.

The Atkins team also used Keynetix’s software tools to factor in geotechnical information, primarily borehole data. “Their approach and our software allowed the data-management work to be directly included in the model,” says Morin. “This enabled the geotechnical data to be visualized within the 3D ground model and gave Atkins the ability to quickly combine, organize, and manage geotechnical data in the context of the existing and proposed structures, which improved and refined their knowledge of the site.”

Keynetix’s geotechnical data-management software made a tangible contribution to the preliminary design of the Silvertown Tunnel. Most notably, Atkins designers were able to determine strategic placements for just three new boreholes as opposed to, potentially, dozens. Given the costs of geotechnical analysis in densely developed areas, the subsurface BIM proved to be an invaluable treasure map—with no sinking surprises.