Major breakthroughs in building methods don’t come around very often. Some world-changing examples include the Great Pyramids of Giza, France’s Pont Du Gard aqueduct, Le Corbusier’s floating-slab design, and the Hoover Dam. Through centuries of design innovation, concrete has been a stalwart material for human-made structures. But old formulations and methods are evolving, as new technologies such as 3D printing and artificial intelligence (AI) promise to make concrete lighter, more durable, and—perhaps most important—more sustainable.

Structural engineer Marcos Silveira is the CEO of Brazilian start-up BRAVO Engineering; he and his team are spearheading a project called Hone Structures, which they hope will help advance sustainable concrete construction techniques. Hone Structures is applying generative design to reinforced concrete structures—starting with proof-of-concept concrete deep beams—to explore material savings and other potential benefits of the process.

Regarding traditional concrete design and construction, Silveira says, “It’s not a problem, exactly, but a limitation because it’s based on the designer’s experience and the limitations of the traditional manufacturing process.” Instead, the Hone Structures approach observes how a concrete structure behaves by finite element analysis (FEA), then uses computation to reshape it and strengthen it in the right spots. “Basically, we divide the design load into a range of steps,” he says. “Instead of proposing and calculating an equivalent truss to represent the complex shape—a strut-and-tie approach—we analyze each load step, increasing it to understand the weakest points where reinforcement is needed.”

The team built several concrete forms in the structural lab at the University of Windsor, attached them to hydraulic frameworks to apply pressure, and applied a digital image correlation (DIC) system using cameras to record the tests, which made it possible to analyze the strain and stresses under certain conditions of force later. They then went back to the generative-design algorithm to come up with new lines of code in order to further improve the relationship between structural behavior and the material used for the next batch of elements.

That led to a truss characteristic of the atypical, irregular shapes generative-design algorithms are known for: weird but optimal. Hone Structures produced 10 major designs for the piece, selected from more than 1,000 models generated by the algorithm. The team began using topology optimization as a trigger in the generative-design approach. In other words, the element was divided into small elements (FEA processes); understanding the behavior of—and stresses on—a given element yielded calculations that, when combined, informed the behavior of the entire piece. For each step of load, the algorithm analyzed which small elements could be excluded without compromising structural behavior of the entire set; after that, it ran again and again until it achieved the design goal. 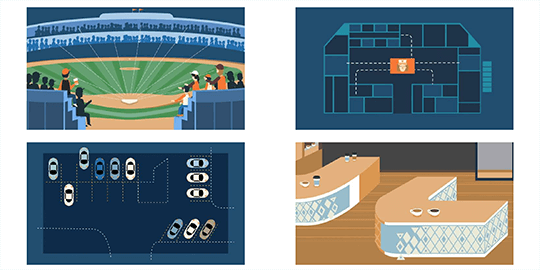 The final result was a deep beam comprising just 55% of the material that would have been used in a traditional, human-driven design process. After proving the possibilities for reducing material, the next logical step is exploring better materials science, incorporating additive manufacturing, and making the whole process ever smarter (and greener).

Ultrahigh-performance concrete, used by the US Federal Highway Administration, is tougher and more expensive than traditional mixtures, but less of it is needed than regular concrete—and with the material savings that generative design offers, it becomes even more affordable. It also uses more sustainable formwork to construct, further saving money and materials.

Technologies such as 3D printing are changing the manufacturing process. Traditional formwork that constrains concrete to straight lines might be a thing of the past; research is continuing apace on 3D printing the steel rebar found inside concrete structures. At the same time, Silveira says research by companies printing steel on a small scale is opening the doors to evermore-complicated rebar structures for concrete. Others are experimenting with making rebar from lighter and stronger carbon-fiber compounds.

As a proof of concept, Hone Structures is designing a reinforced concrete footbridge using generative-design algorithms and robot builders. Developing this structure will let the team work with shapes, forms, and sizes that are beyond the limits of current technology.

“When we’re working with regular formwork, we’re limited to certain shapes, so we have to use those limitations in the design process,” Silveira says. “In the future, the design of the rebar cage could be decided by the demands of the performance, not limited by current assembly technology.”

He says a footbridge is the ideal application for everything Hone Structures has been working on, because the prestressed concrete emerging from the company’s research can be formed in very different shapes from those traditionally used in the built world. “This application could be a good opportunity to break some paradigms about additive manufacturing and generative design in the reinforced-concrete world,” he says.

The goal is to complete the project within two or three years. The bridge won’t only be a showcase for what’s possible; it will also be a teaching tool to demonstrate the limitations, opportunities, and peculiarities of the method.

See Also: 3 Reasons Construction Will Be an Economic Bright Spot in the US After COVID-19

Silveira says these techniques can be applied to a variety of structures, anywhere in the world. “We’re aiming to produce entire buildings, tall buildings, metal buildings,” he says. “When you’re using artificial intelligence to design the position of the structural elements, you can go very far.”

These types of innovations could lead to a world that looks physically quite different, as the architecture will be driven partly by algorithms supplying choices that wouldn’t be possible through traditional design practices.

“In the future, we can use this approach to decide the architecture and the position of the elements, so the shape is going to be very different from today and the performance is going to be way better,” Silveira says. “Once we can work with thousands of solutions, we can find the points where we’re trying to improve the performance and decrease the amount of material.”

As 3D printing and robotics make construction faster, generative design will reduce materials and create new paradigms to make building components better. Projects such as Hone Structures are ticking all the boxes to give construction a new, sustainable lease on life.