Jebel Hafeet, United Arab Emirates’ second-highest peak, towers at 4,000 feet, its ridges stretching across the garden city of Al Ain near Abu Dhabi. In 2017, the historic site—home to the Beehive Tombs, hundreds of dome-like burial sites dating back 5,000 years—was recognized as part of a national park, and in 2018, it was incorporated into the Sheikh Zayed Protected Areas Network.

Now, a development project at the foothills of Jebel Hafeet will use digital urban planning to meld old with new, with the goals of preserving and celebrating the region’s natural and cultural heritage and emphasizing connectivity and community. 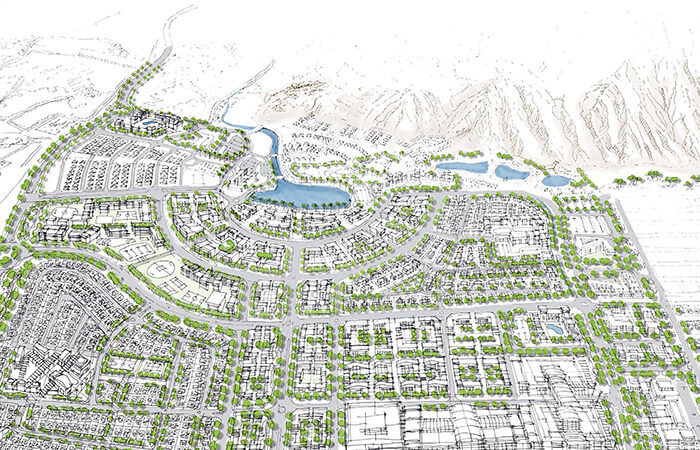 A sketch of The Plantations. Courtesy of GHD. 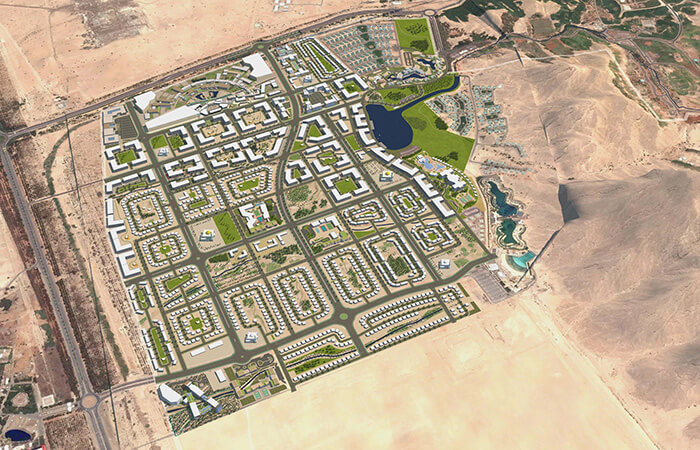 A rendering of The Plantations. Courtesy of GHD.

Designed by professional services company GHD for real-estate developer Tamouh Investments, The Plantations is a 272-hectare (672-acre) master plan with 1,700 plots, including cultural, residential, and leisure spaces. The Plantations seeks to celebrate the mountain’s heritage while meeting the needs of Al Ain’s modern, growing population. The vision for the master plan is to develop a community that celebrates the site’s unique cultural assets and delivers a mixed-use development that is attractive to live, work, and play in, all in a contemporary Emirati setting.

Given the intricacies of a master plan—a dynamic, long-term planning document and conceptual layout used to guide future growth and development of an area—GHD aimed to create a simpler process, one that would cut down on rework, improve quality, and make way for more creativity.

“As part of our focus on using digital solutions to deliver better outcomes for our clients, we looked at our workflow, turned it on its head, and came up with a more data-driven approach,” Picton says. The result is a phased workflow starting with parametric modeling, then moving into Building Information Modeling (BIM) and automation. Future projects will benefit from further refinement of the workflow to incorporate the value of generative design and beyond.

To help its employees adopt this new approach, the company set up learning paths and training modules, identifying various levels of automation and aligning employee’s skills to those levels. “We provided the framework and structure for people to be able to step through as their skills, competencies, and understanding developed,” says Paul Murphy, GHD technology and technical applications leader. “There was a natural progression from where people were with foundational skills, through parametric modeling, into more workflow-based automation, and then into the higher order.”

This new workflow even addressed the disconnect between geometry and information. “Our geometrists had all of their information stored in spreadsheets, and when you wanted to do any kind of edit or design changes, you’d have to go through them all,” says Ahmed Hamdy, GHD senior landscape architect.

The company integrated BIM into its workflow using Autodesk’s connected tools across architecture and infrastructure: Civil 3D as a data source, InfraWorks for visualization, and Revit for design and documentation. Through BIM and automation, the team increased efficiency by at least 50% for geometry and calculation and by as much as 99% in the analysis phase.

Automation also helped GHD create a faster cycle between concept and fulfilling the data requirements of the Jebel Hafeet project. For instance, the company’s urban-design and master-planning team in the UAE provided the client, Tamouh Investments, with multiple design options in a much shorter span of time.

“Taking what we have achieved with the workflow on this project and applying it on future projects, the time saved could be invested in developing a generative-design model and optimizing the outcomes even further for the client,” Picton says. “We are removing the time-consuming and manual part of the process to deliver better value for our clients through automation and, in the near future, generative design.”

Picton uses plot-regulation sheets as an example. For this project, the master plan had more than 1,500 plot-regulation sheets that the team needed to produce. If those were done manually, it would take almost two months. “We did some metrics after we finished, and we came to the conclusion if we were going to rerun this project manually, it would take two drafters 10 weeks,” Picton says. “With automation, it took one drafter two weeks.” 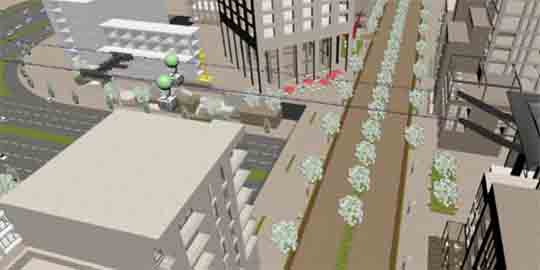 The client team became more engaged in the design process, immersing in virtual reality (VR) and augmented reality (AR) reviews. The client used AR to view the master plan as a whole while VR let the team get deeper into the model and visualize what it would look like from a visitor’s point of view. “We selected key points in the project that the client could experience through VR so they could see how it will be built in the future,” Hamdy says.

These visual experiences paved the way for GHD and the client to be true partners in the project. “The way we were able to collaborate with the client was different … and it was better,” Hamdy says. “It was true collaboration. We were actually designing together.”

But GHD’s path to automation was not always smooth. Applying the new workflow to an actual project instead of a test environment presented its own challenges. “The project was real; we were delivering real outcomes for the client; there wasn’t room to get it wrong,” Murphy says. “But this provided a sense of purpose, giving the team the opportunity to see the actual benefits for the client and how the time savings enabled them to shift the focus of their efforts. They could see the return on investment in real time.”

Tackling the challenges of Jebel Hafeet’s environment was no easy feat, either. The mountain is an important part of Al Ain and UAE’s landscape, and GHD needed to develop a design that embraced that. “One of the design goals we implemented in the project was maximizing the views to the mountain,” Picton says. “So with a large building, we’d move it away from the mountain to ensure that the houses around or behind had better views.”

The team also had to meet certain environmental requirements, including incorporating wadis—geological features akin to small creeks that catch rainwater. “Automation enabled us to repurpose a designer’s time from manual and time-consuming production activities so they can be more considerate of the design outcomes they’re trying to achieve for the community and the environment,” Murphy says.

Six months after starting the Jebel Hafeet project, Hamdy demonstrated the workflow to other teams within GHD, preparing them to adopt a similar process for their projects. “What the Jebel Hafeet project has done is create visibility of possibility for other teams,” Murphy says. “It became a foundation project for us, one that has spawned a deeper understanding across multiple countries.”