Kosrae is arguably the most dynamic, mysterious, and pristine of all island states in the Federated State of Micronesia (FSM). Located three-quarters of the way from Hawaii to Indonesia and barely 15 miles across, this tiny, idyllic island is known for its white-sand beaches, undamaged coral reefs, friendly locals, ancient ruins, and World War II artifacts.

The Kosrae State Historic Preservation Office (KHPO) is a team of anthropologists, field workers, archaeologists, and architects working together to address the cultural, environmental, and historic needs of the island. KHPO operates as part of the Kosrae Island Resource Management Authority (KIRMA), an entity that encourages sustainable economic and social development.

Ashley Meredith, an applied cultural anthropologist, works with KHPO to help manage resources on Kosrae by documenting and describing Kosraean culture. When it comes to preservation and research, some of the primary challenges KHPO faces are climate related: unforgiving environmental conditions and slow internet speeds, among other things.

“Island environments are harsh with their humidity and salty air,” Meredith says. “There are also bugs everywhere, but the buildings retain heat, so they really need to be open-air to maintain a breeze. Paper is a fast way to preserve data, but it doesn’t last long in the humidity. While digital preservation is nice, hardware components corrode quickly and so a new desktop computer is necessary every two to four years.” Additionally, KHPO faces challenges driving consensus decisions about preserving historic artifacts on land that has been maintained by multiple families for several generations. Traditional paper representations don’t always serve well to represent complex plans or garner support within these complex land ownership structures.

Among Kosrae’s primary draws are its Lelu Ruins, which are being considered for UNESCO World Heritage nomination. Located on Kosrae’s Lelu island, the ruins—remains of a civilization that peaked in the 14th and 15th centuries—are megalithic walls built from prismatic, columnar basalt (volcanic rock) and coral. They include sacred burial tombs, remnants of complex hierarchal societies that existed prior to European settlement.

The Lelu Ruins are globally significant because they contain important historical information about the structure of ancient Kosraean civilization and architecture found nowhere else in the world except the younger Nan Madol site on the Micronesian island of Pohnpei. Over the centuries, however, they’ve been overgrown by dense forests. They’re also at risk of submersion and erosion from rising sea levels. Other Kosraean sites of cultural and historic interest that are at risk from climate change are the Menke Ruins and a World War II Japanese radio tower.

KIRMA Director Blair Charley says that Lelu Ruins’ UNESCO World Heritage status success depends largely on the landowners. Because many landowners don’t have a clear understanding of the cultural significance of their surroundings, very little effort has been made by locals to preserve the ruins. In this case, modern, immersive media such as virtual reality (VR) can empower consensus decision-making by offering first-hand, intuitive experiences to which all constituents can relate.

“Since current work focuses on paperwork and documentation of the site, and the willingness by landowners to comply, virtual reality can show and make the case [for UNESCO World Heritage status] by presenting supporting documents through pictures taken by drone, or still images from VR,” Charley says.

KIRMA authorities agree that pictures of the actual Lelu site along with photogrammetric images derived from VR have the potential to really help people understand and experience the ruins, further supporting its case for preservation. 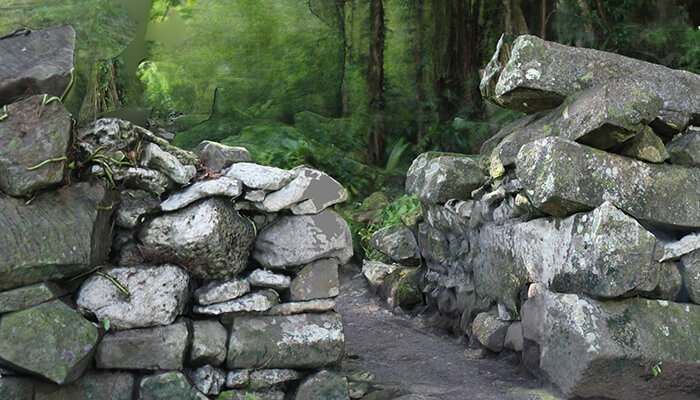 A VR snapshot of the Lelu Ruins. Courtesy Dace Campbell. 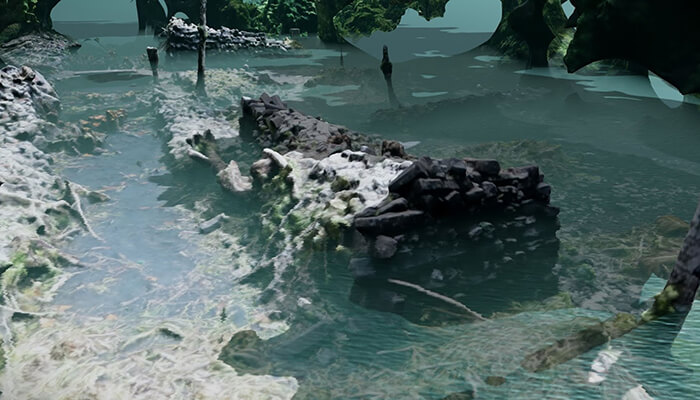 The Lelu Ruins as they might appear in the future. Courtesy Dace Campbell. 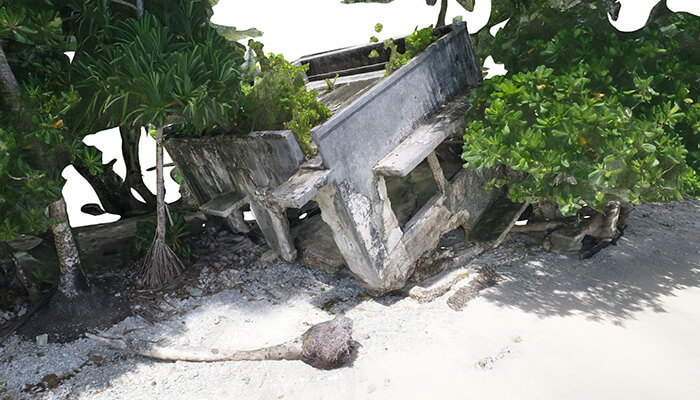 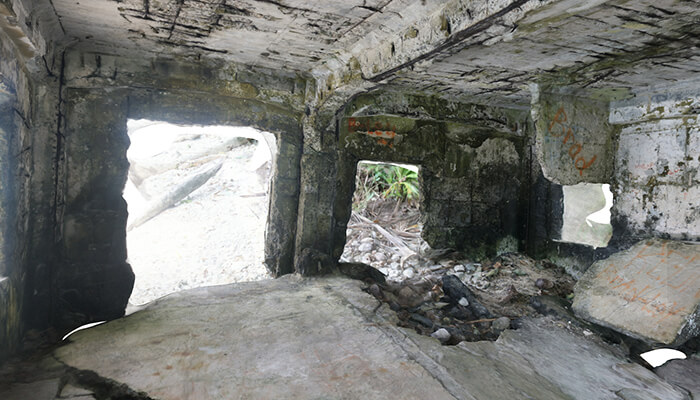 The purpose of the project was for Campbell and the KHPO team to experience new applications of VR technology (and supporting data) for culturally significant sites to support effective decision-making about their preservation. Campbell’s use of VR and photogrammetric reality capture allowed KHPO and their constituents to see and understand sites on the island in new contexts, gaining perspective through new viewpoints, and scales. Kosraeans could also transcend time, learning how their ancestors lived by experiencing the ancient dwellings as they existed in the past and seeing how the ruins will be impacted in the future when they are submerged by a six-foot rise in sea levels. “In the planning process, VR and reality capture can be useful in helping residents and visitors understand the space they’re visiting by having a view they wouldn’t otherwise have because the technology provides that, or because of site access,” Meredith says.

After doing some experimenting in his Seattle backyard—including creating an augmented reality (AR) experience that portrayed ancient Kosraean dwellings—Campbell was able to map out his project and technical workflows ahead of time. When he got to Kosrae, he partnered with local leaders to determine the island’s valuable points of interest that were most at risk from rising sea levels. After clearing dense vegetation from the sites, specifically the Lelu Ruins, Campbell and his team on Kosrae were able to gain better visibility to capture clearer drone footage of the ruins.

Campbell used Autodesk 3ds Max and ReCap Photo to convert the sites into VR experiences to give locals, KIRMA authorities, and the KHPO team a clear view of the ruins. The resulting, immersive experience helped locals understand their surroundings better and enabled KIRMA and KHPO to establish mitigation strategies to help preserve them, ultimately giving the team tools to present a stronger case to UNESCO. “Before, I was challenged by not tapping into my spatial faculties—VR may change that,” Meredith says.

How Technology Can Keep History Alive

Drones show views of Kosraean artifacts and heritage sites from above, while VR offers the experience these up close, intuitively, and without obstructions. These tools may also prove useful for other KIRMA units such as forestry, Geographic Information Systems (GIS), and marine monitoring.

Strategic application of these technologies shows enormous potential for environmental and preservation initiatives on Kosrae—and across the globe. VR and reality capture allow large-scale, real-world views of environments that no other technology can mimic, opening up new possibilities for historic preservation and global exploration. Sea levels may be rising and artifacts may be sinking, but advanced technologies can keep Kosraean culture alive, allowing locals and historians to experience the mystique of this special island for generations to come.

The History of Zero Net Carbon (Surprise: It’s Not Exactly a New Concept)