When it comes to public transportation, it can seem like passenger comfort ranks last in the list of mass-transit priorities—which becomes especially vexing on longer trips. But Singapore-based startup AirGo Design is working to change that. The company has already successfully challenged the $735 billion airline industry by revolutionizing the economy-class passenger seat and is readying to expand its reach to marine (ferry) and bus seating.

Tackling these other transit industries wasn’t always part of the plan. AirGo first gained traction with its ultralight, ergonomic, and thin seat frame designed for existing long-haul economy airline seats. Persuading airlines to upgrade was another challenge in itself: Tight regulations and tiny profit margins plague the industry. But after many tests and certifications, the startup’s airline seats are expected to be in mass production by 2018 and implemented in 2019. Then last year, AirGo was approached by a company that makes marine products to revamp its ferry seats.

“As it turns out, the seats for ferries are close to bus seats,” says AirGo cofounder and CTO Alireza Yaghoubi, whose background is in mechanical engineering. “They have a different certification procedure, but they are essentially the same product. There’s been a lot of demand from different industries that we didn’t intend to go into, but then we saw that everyone seems to want a new design.”

Mass-transit seats have long been designed using anthropometric charts, which attempt to measure the size and proportions of the human body with average values for the 50th, 95th, and 99th percentiles. AirGo’s design process incorporates 3D body-scanning technology, not average values, which makes it uniquely human-centered. “You’re dealing with three numbers at a time whereas people do not come in numbers,” Yaghoubi says. “They come in a spectrum, and that is difficult to see in a table.”

For example, when the armrest is too low in seats, people who are taller or shorter than the “average” person it was designed for end up stretching their arms in either direction to use the armrest, causing expansion of muscle tissue between the neck and top of the shoulder. “These are things you don’t really see by looking at charts and tables, because it’s just a bunch of numbers,” Yaghoubi says. “It’s not as interactive as when you scan a human.”

To develop its seats, AirGo took 3D-scanned versions of roughly 10 males and 10 females who were shorter or taller than average: 65–75 inches for males, 61–71 inches for females. By covering this range, Yaghoubi says, AirGo produced three standard models (short, average, tall) for males and females as guides to design a general contour of the seats. The contour derives from a range of nodes (points in the scan) taken from body parts that are generally different from person to person—think kneecap position, neck height, lower-back curve.

“We found that for females, there is a 10-degree shift in lumbar curve in sitting versus standing posture,” Yaghoubi says. “It is hard for women to sit completely upright, and a good seat should not have a flat backrest. At the same time, the male body is naturally curved backward, so a good seat should come with 5 to 10 degrees of prerecline to accommodate that. Most seats today are completely upright before reclining—if there’s a reclining feature to begin with.”

Correcting for these findings, a typical AirGo backrest can comfortably fit 95 percent of travelers 15–65 years old. At the same time, introducing too much stability in the seat adds weight to it, making it costly. But with 3D-scanning technology, people of different sizes, ages, and genders can sit comfortably next to each other. “When we talk about comfort, it’s a very subjective matter, especially when you don’t know the demographic of people who are going to use the seats,” Yaghoubi says. “People come in different heights and shapes.” 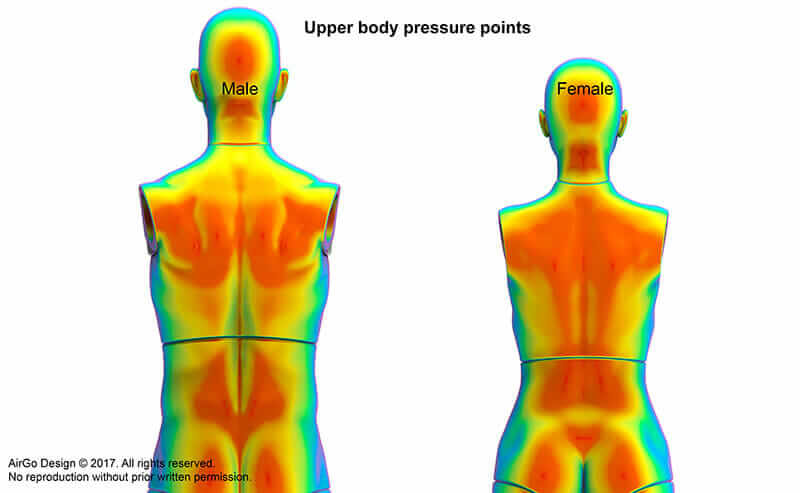 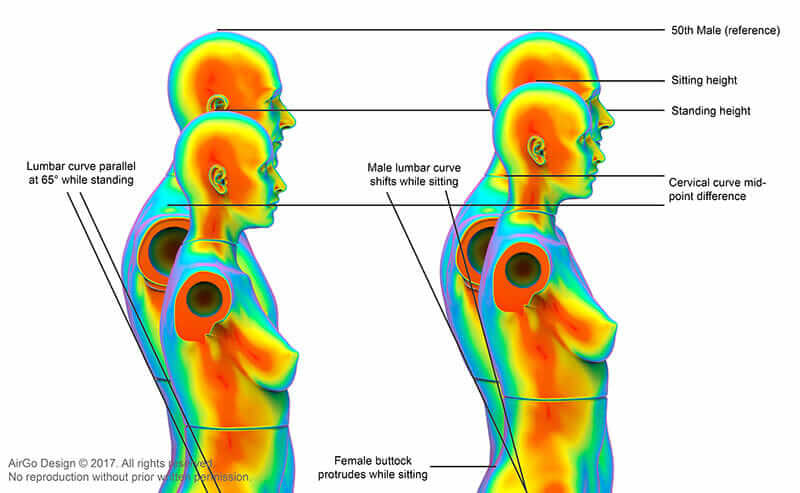 AirGo maps and tracks a range of nodes (points in the scan) that are critical to its design. Courtesy AirGo.

Another advantage to AirGo-designed seats is their self-cleaning feature, which stemmed from Yaghoubi’s background in materials science and an observation that aircrafts don’t use any bright colors. “They all just use gray, dark blue, brown, and stuff like that,” he says. “And it’s because white-colored things easily get stained.”

That’s why AirGo seats can be sprayed with a water-based fluoropolymer emulsion that is superamphiphobic, which makes it stain resistant and contains antimicrobial properties that keep food, oil, bacteria, and odor out. As a result, AirGo can produce seats in modern and vibrant colors. Among airline, bus, and marine seating, each product differs due to the types of upholstery available for aircraft or bus models.

Yaghoubi says implementing bus and marine seating is much easier than airline seating because AirGo can team up with other bus-seat manufacturers—like Khimaira Oy (Finland)—which already have industry-certified bus frames. He hopes to be showing the prototype to a major bus manufacturer in Europe within the year.

The company’s design process also includes prototyping different types of upholstery and laminating the cushion in order for it to have osteomorphic design, which means the seats have foams of different densities arranged in geometrical patterns that support different pressure points. So as a passenger (of any size or shape) sits, the cushion responds to different amounts of pressure, which increases blood flow and reduces numbness.

The improved back support and seating posture of AirGo’s seats yields more leg room within the same footprint as current seating arrangements—an important consideration for airlines looking to maximize space. Better design can mitigate the approach that’s been taken so far: to jam as many seats as possible into a set space, especially on planes. Using lighter, more ecofriendly materials and an approach that prioritizes comfort could be a win, both for passengers’ bottoms and the transit industry’s bottom line.