“Vernacular architecture can be said to be ‘the architectural language of the people’ with its ethnic, regional, and local ‘dialects,'” writes Paul Oliver, author of The Encyclopaedia of Vernacular Architecture of The World. Unfortunately, there has been a growing disregard for traditional architectural language around the world due to modern building technology quickly spreading a “loss of identity and cultural vibrancy” through what the Architectural Review recently described as “a global pandemic of generic buildings.”

People have come to see steel, concrete, and glass as architecture of high quality, whereas a lot of vernacular methods including adobe, reed, or peat moss are often associated with underdevelopment. Ironically, these local methods are far more sustainable and contextually aware than much contemporary architecture seen today, despite ongoing talks and debates about the importance of sustainability. As a result of these trends, a tremendous amount of architectural and cultural knowledge is being lost. 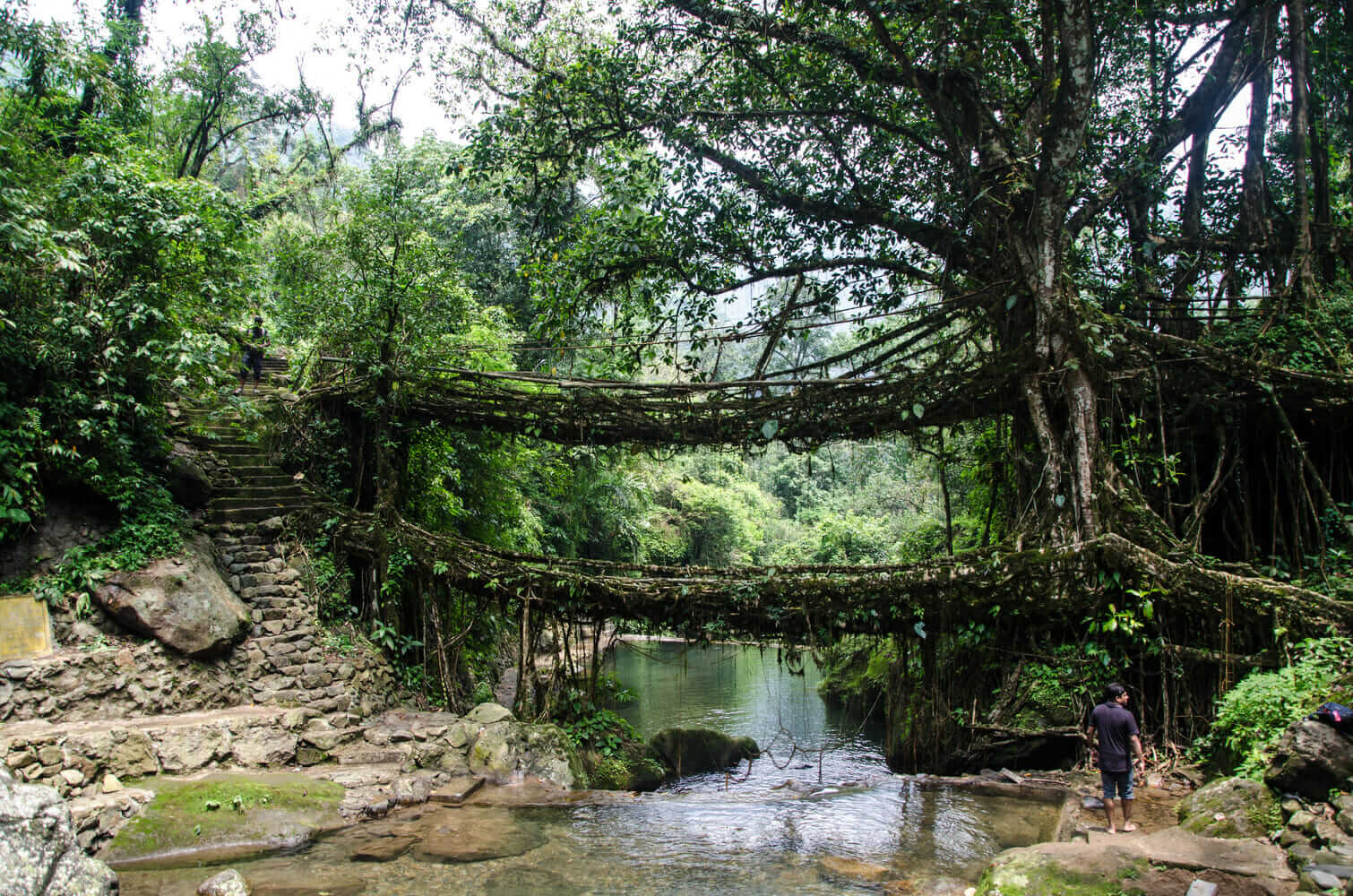 Found in what is possibly the wettest human-inhabited place on earth, during monsoon season in Meghalaya the rivers grow to become far more violent and powerful than in the dry season. To cross, the Khasi tribes that lived in the region would build bamboo bridges; however, they were not strong enough to last the monsoon. Around 180 years ago, they experimented with a new technique, pulling the roots of a rubber tree across a river, which slowly grew into a bridge that is now capable of sustaining the weight of 50 people. The living-root bridges of Meghalaya take around 25 to 30 years to grow, and they only grow stronger with time. There are a few living bridges that have had enough time to grow into fully functioning structures, but over the past 25 years, this practice has begun to die out. Waiting decades for a bridge to form is far too long in the modern-day world, especially when a steel or concrete alternative can be constructed in a fraction of that time—although they certainly aren’t as magical. 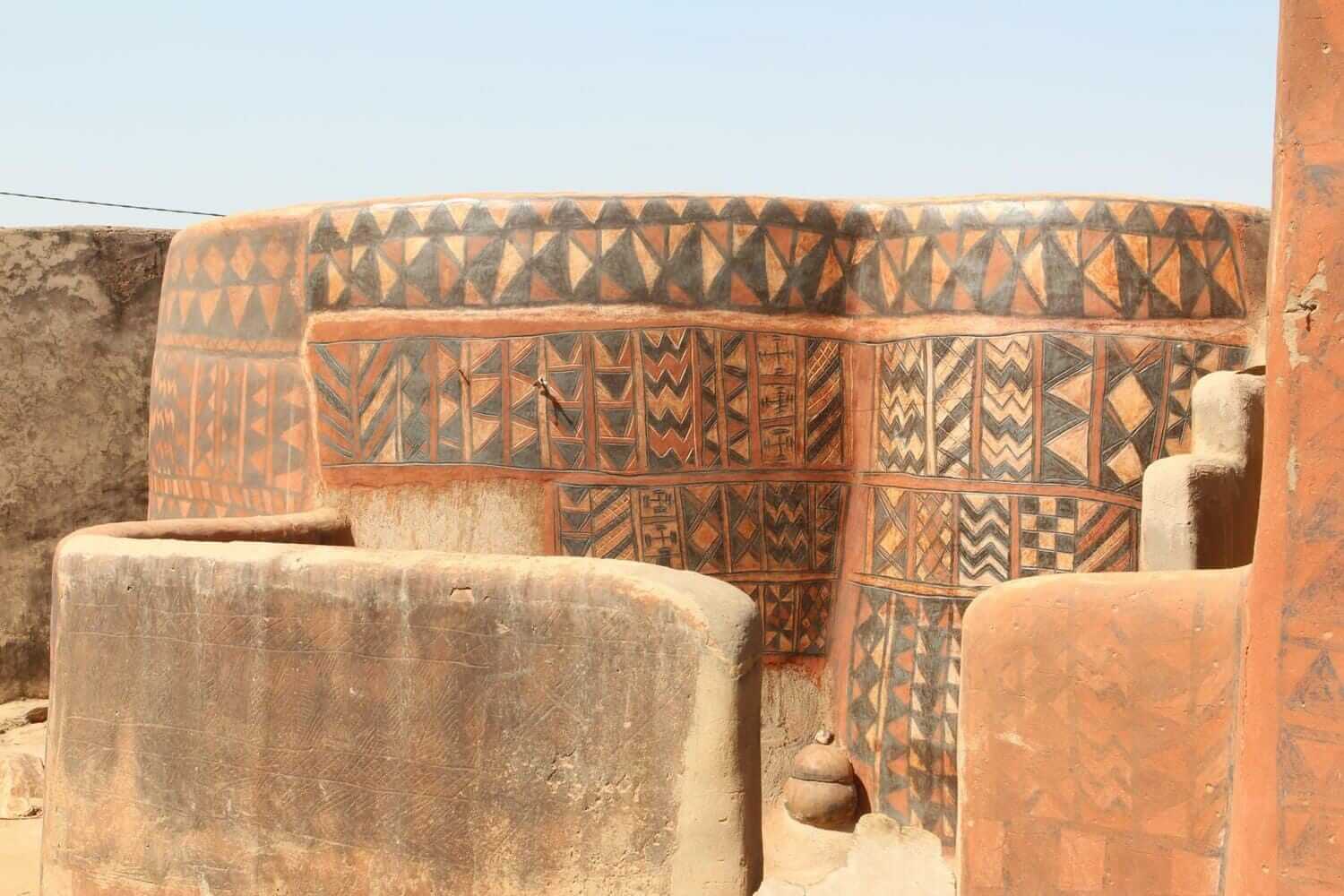 In Gurunsi, the art of rock painting is still very much alive—it has just been transferred from caves to buildings. The mud huts are constructed, then covered in mud, cow dung, soil, pulverized rock, clay, and chalk to produce elaborate geometric patterns on the façades of the houses. Gurunsi women redecorate the buildings every four to five years with these murals, which often consist of motifs associated with specific meanings, such as cultivated fields, rolled grass, or the pattern of a man’s woven shirt. Each building is different, reflecting the personal taste of the inhabitants and resulting in a village that is rich with a variety of artistic and cultural expression. 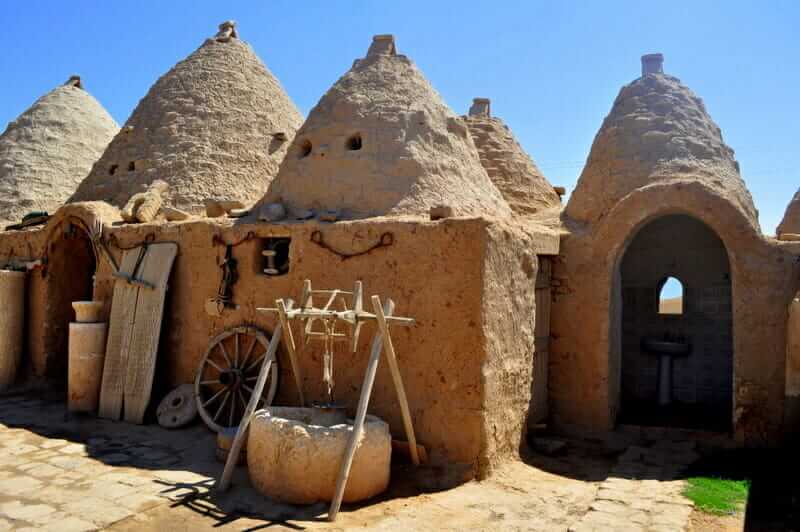 In the town of Harran in Southern Turkey, houses shaped a little like beehives were once a popular housing structure, constructed out of adobe, brick, and stone found in the area. The domed shape can be built quickly, making it a very practical construction for the nomadic population to set up that is still resistant to heat and cold—unlike a common tent, for example. Ventilation holes on the sides provide cooling air circulation through cross-ventilation, and on top of the dome, one acts as a chimney. Their domed shapes also mean that there is a low surface-to-volume ratio, meaning that there is very little heat loss during the cold winter months. Due to the transition of their nomadic culture into a more settled one, the beehive houses are no longer used as homes but more as storage spaces or barns. This declining importance and value of the buildings in their society mean that they are no longer restored, resulting in a collection of houses in a poor state. New housing units around the city also lack a contextual relationship with the beehive houses, as knowledge of their construction techniques diminishes. 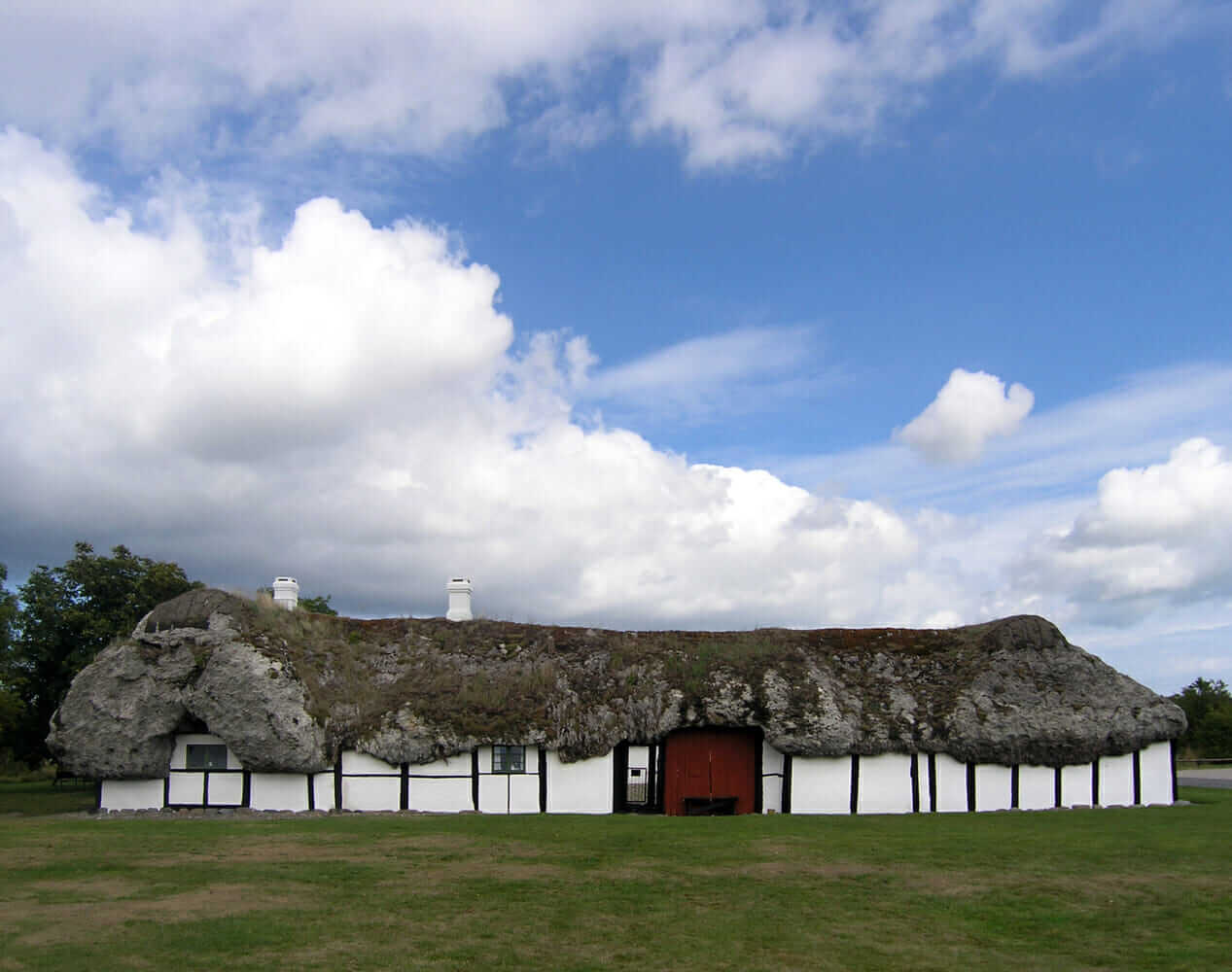 On the island of Læsø in northern Denmark, there is a longstanding tradition for seaweed roofs, made using eelgrass. A successful salt industry on the island meant that most of the trees were used to power kilns for salt refinement, leaving residents with little to construct their homes. As a result, they used driftwood from shipwrecks and eelgrass from the ocean that were able to withstand decay for hundreds of years, thanks to the fact that they were impregnated with saltwater. Unfortunately, a fungal disease wiped out over 200 of the existing buildings in the 1930s, leaving only 19. There is an ongoing attempt to conserve the remaining buildings; however, with 300 kilograms of eelgrass required for every 1 square meter of roofing, restoring the vernacular buildings on Læsø is not the simplest of tasks. The reforestation of the the island has also contributed to the decay of the roofs; surrounding trees now protect them from the salt-laden winds that once covered the eelgrass, allowing plants to take root in the seaweed that then begins to rot. Fortunately, Danish citizens have not given up and continue the effort to restore any buildings they can, even building the first seaweed roof from scratch in over a century. 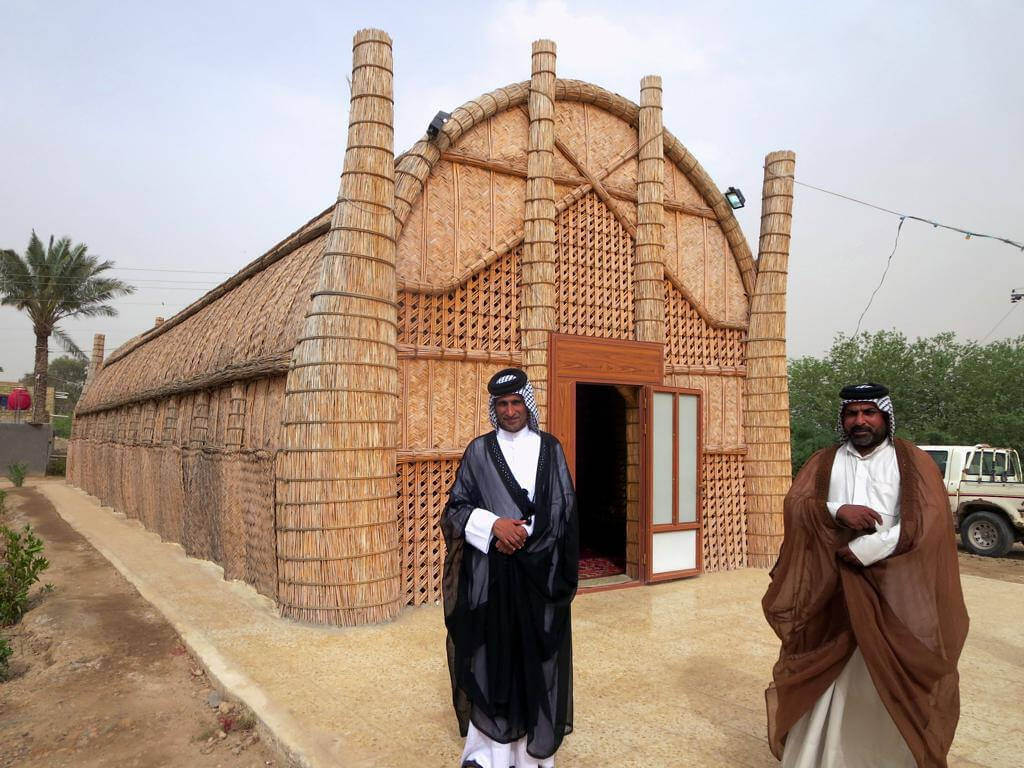 The Ma’dan people, or Marsh Arabs as they are sometimes known, inhabit the marshlands at the junction of the Tigris and Euphrates rivers in Iraq. Around the marshes grows a substantial amount of reeds that the Ma’dan use to build with, wrapping them in bundles to create columns, arches, and walls; a reed house can be erected in just three days. Sometimes they float on “islands” called tuhul, and other times, they are moved depending on the rising and falling water levels, re-erected in less than one day. These homes, though simple in their material and construction, can last up to 25 years with proper care. Unfortunately, during the rule of Saddam Hussein, the Marsh Arabs were persecuted for housing people the government regarded as terrorists or enemies of the state. The marshes were drained to the point where much of the Ma’dan population had no choice but to move in order to find adequate food, diminishing their population of half a million down to around 1,600 at the turn of the century. Over a decade later and after the fall of the regime, the dams were broken, restoring the marshes to around 50 percent of their original size and opening up an opportunity for the regrowth of the Ma’dan culture. 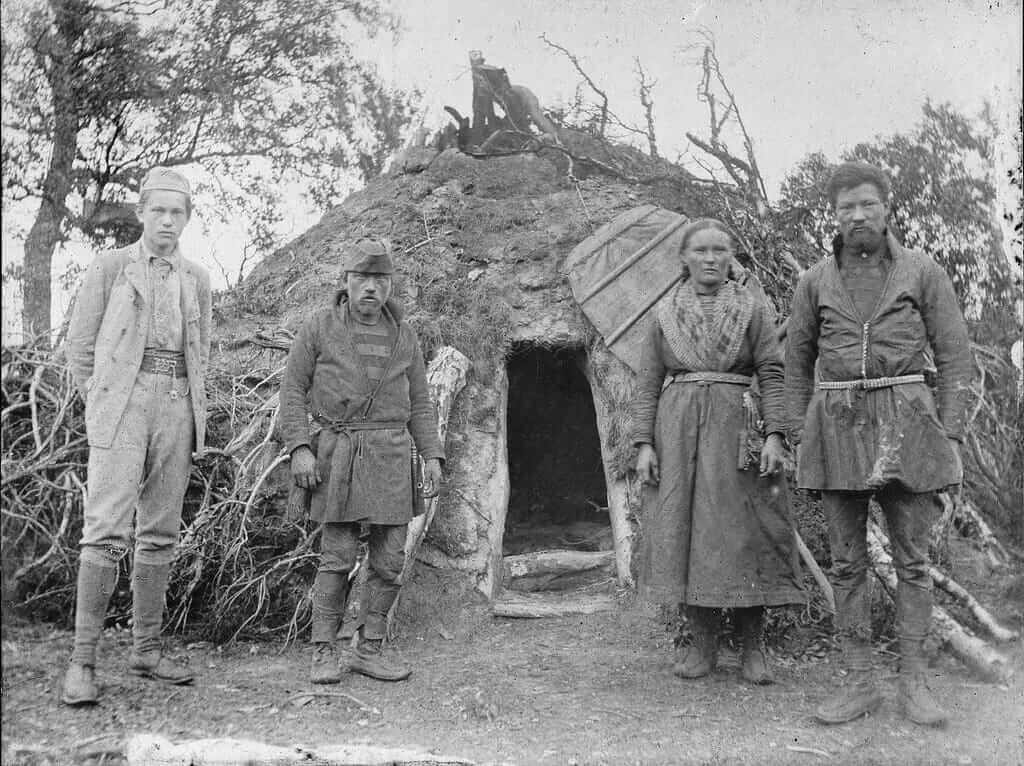 Sami people cover areas in northern Norway, Sweden, and Finland, as well as the Russian Kola Peninsula. Many traditionally hunt and fish for their livelihood, but they are best known for their seminomadic reindeer herding, even though only around 10 percent of the current Sami population is involved in the practice today. Goahti constructions have been a central part of this lifestyle, used as a transportable shelter for longer journeys. Domesticated reindeer were used to drag the larger curved poles needed for the structure, which were then covered in peat moss for better thermal insulation. In favor of efficiency, this practice has been thoroughly reduced, due to the inconvenience of transporting the large curved poles. Instead, Sami people often opt for the well-known lavvu tent structures on their travels. Goahtis have also been used as more permanent dwellings and shelters for livestock, up until around the Second World War. Nowadays, Sami people tend to live in ordinary homes, just like the ones found around the rest of the Nordic Regions. 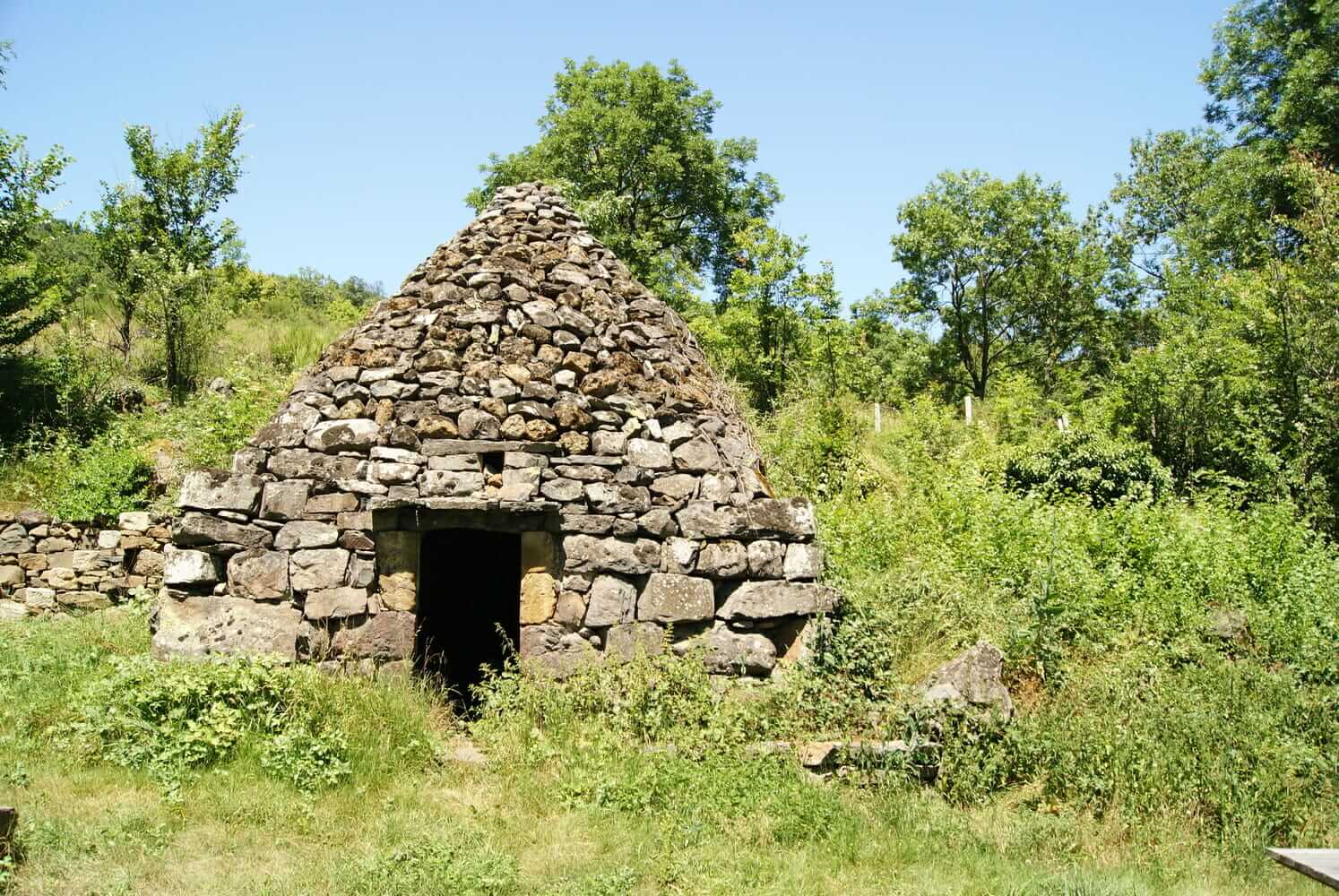 Built by winemakers in Haute-Loire, France, the chibotte is a dry-stone hut that was used as a temporary seasonal dwelling in fields or vineyards. Owners of a vineyard would typically live in their chibotte on Sundays or during the summer, up until around the 1920s when the huts began to be replaced with more comfortable pavilions. Due to the volcanic plateaus of the Velay region in the Haute-Loire, chibottes were usually constructed using volcanic rock, such as basalt, that was removed from the earth when planting a vineyard. The vaults were constructed with a technique that included two layers: an inner arch whose rocks were angled outward and an outer arch whose rocks were angled inward, hence supporting each other. 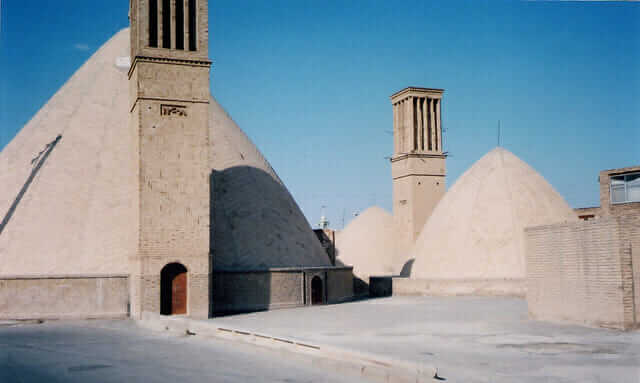 Literally “water storage” in Persian, the ab-anbar used to be the cistern systems that supplied water to Iranian cities. The underground reservoirs sometimes descended as far as 20 meters below ground level, protected by a dome that prevented evaporation and any contamination of the water. They were constructed using bricks that contained a mortar called sarooj, considered to be impermeable to water. Badgir, or wind-catchers, channelled air down into the cistern to cool the water and prevent condensation on the inside of the dome. In a desert, a structure as important as this one was incredibly valuable, often integrated into other highly regarded structures such as mosques. With the introduction of pipelines however, the ab-anbars have started on their road to extinction. They are now, for the most part, just tourist attractions. 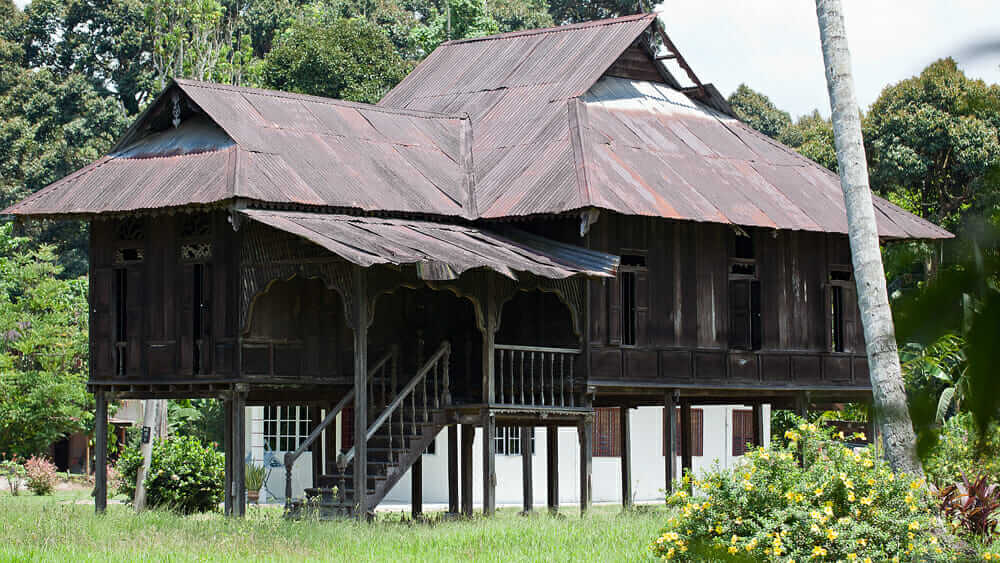 Vernacular architecture in the Southeast Asian regions is usually, as with most vernacular building, built from local materials—in this case, wood. Unfortunately, wood rots easily in the humid tropical climate, making it necessary to repair buildings on a regular basis. To deal with the humidity and heat, traditional Malay houses were designed to be porous, allowing for cross ventilation through the building to cool it down. Large overhanging roofs allow for open windows in rain and sun, both of which occur on nearly a daily basis. Building on stilts was another way to increase airflow and prevent damage to the house in the event of heavy downpours. However, this knowledge of passive cooling systems seems to have been lost in the midst of urbanization, being replaced by air conditioners that are attached to buildings that were not well designed for the Southeast Asian climate. 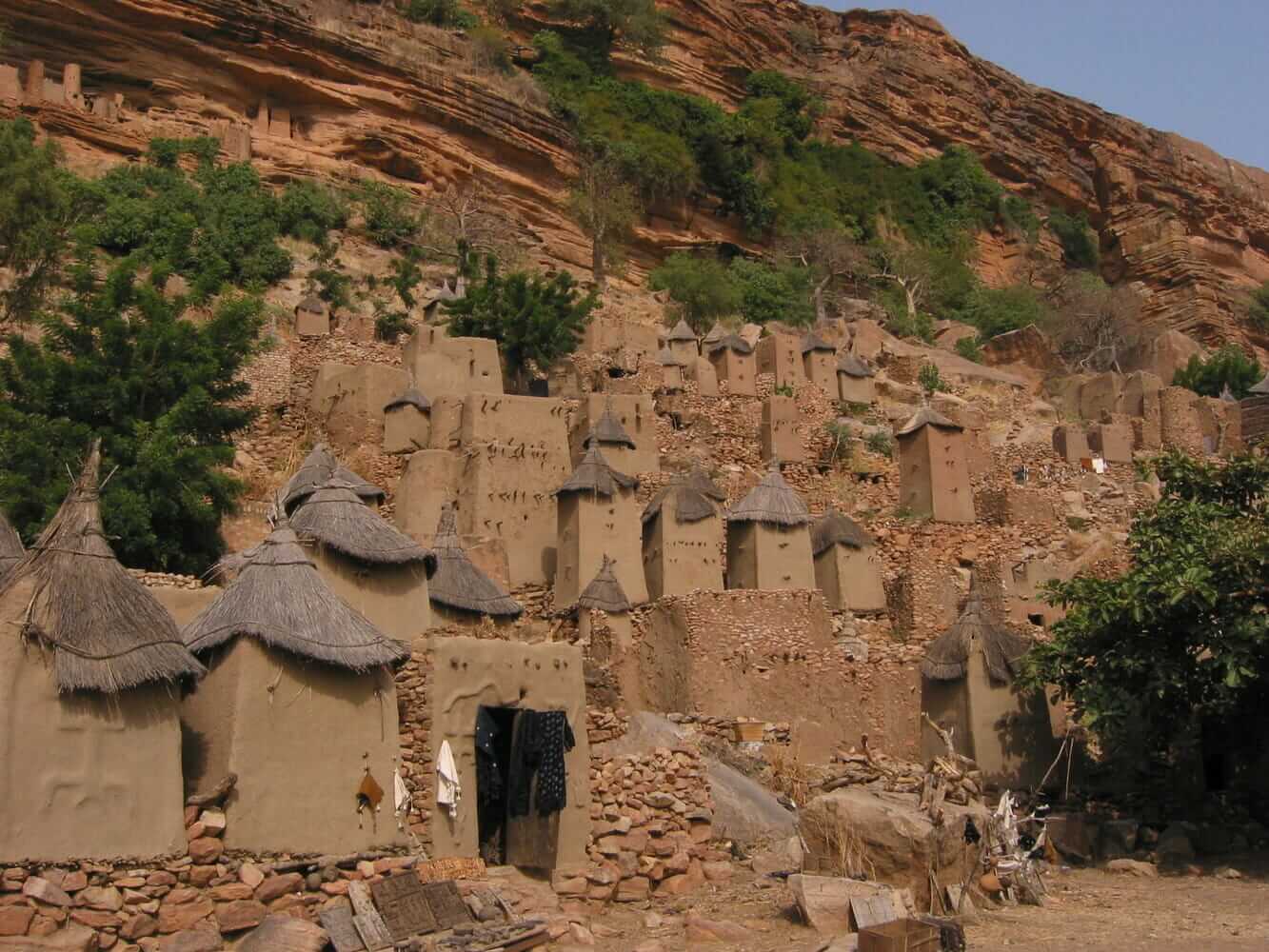 Also known as the Land of the Dogons, 289 villages of earthen buildings cover sandstone plateaus, escarpments, and plains in the landscape of Mali. The Dogon adapted to the hostile environment, that in turn became a form of defense against any potential attackers since the 15th century. Despite the centuries-old building knowledge of an unforgiving environment, socioeconomic and environmental factors have driven parts of the Dogon population toward more urban surroundings. Not only does this mean a reduced production of more vernacular architecture and a loss of knowledge, but also a “contaminated” resource, as the Land of the Dogons began to come into contact with tourists and other value systems. In order to preserve the existing sites, the Cliff of Bandiagara was designated a UNESCO World Heritage Site in 1989. 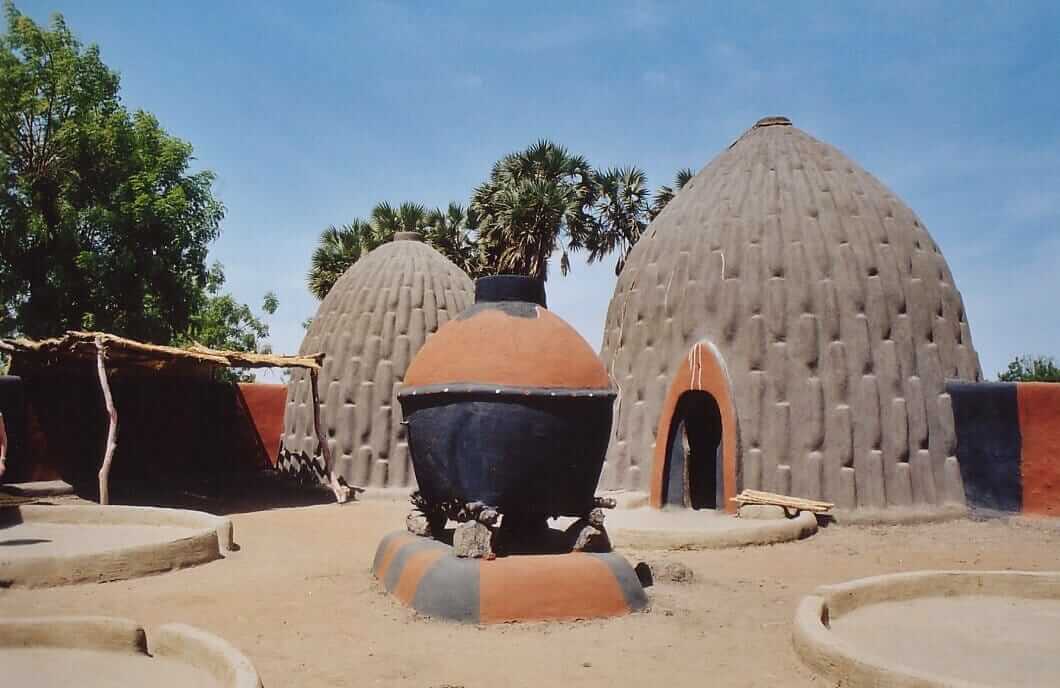 Geometrically arranged reeds are covered in mud to produce the domestic mud huts of the Mugsum people. The huts are built in the form of a catenary arch, withstanding the maximum load with minimum material. In order to construct the complete 9-meter-tall arch, as well as to maintain it, the geometry of the facade creates practical footholds, in addition to their aesthetic qualities. Similarly to the Harran constructions in Turkey, the Mugsum huts also have a hole in the ceiling, acting as a chimney as well as an escape hatch in the event of a flood. Before the discovery of cement constructions, Mugsum mud huts were the most popular buildings due to their low cost and high efficiency. Sadly, this has changed, and the mud huts are now seen as outdated, resulting in a steep decline in the construction method.

Article by Ariana Zilliacus. This article originally appeared on ArchDaily.