The Causes of Warpage

Identifying warpage is one of the easiest aspects of injection molding. Anyone, especially the average consumer, can detect when a part bows and twists into an incorrect position. (Just ask any parent that has grappled with the dreaded words “some assembly required.”)

Understanding why the part is warped is a more complicated task, but one that’s essential to mitigating the issue before steel is cut and the mold is finished, textured, and running parts.

Before we dive into why parts warp, it’s important to understand how and why plastics shrink. To do that, we need to start at the molecular level with a close look at what happens when plastics melt and cool. For the most part, these dynamics depend on the type of material and whether any filler or fiber reinforcement is present.

In a state of equilibrium, ABS, polystyrene, polycarbonate, and other amorphous polymers have a random and entangled molecular orientation, much like a bowl of spaghetti. As these materials melt, the forces between molecules weaken and they move away from each other. In addition, the shear experienced during the injection phase causes individual molecules to uncoil and align to the direction of flow. When flow stops, the molecules relax and return to a state of random orientation. The intermolecular forces pull them closer together until the temperature drops enough to freeze them in place. These forces result in uniform shrinkage, but the relaxation effect causes significantly more contraction in the direction of flow.

Unlike amorphous materials, semi-crystalline materials have regions of highly ordered, tightly bundled molecular structures. When they melt, the crystalline structures loosen and the molecules align to the direction of flow, much like amorphous polymers. But when the materials cool, they don’t relax. Instead, they maintain their orientation in the direction of flow and the molecules begin to recrystallize, resulting in significantly higher shrinkage rates. In this case, however, the effect is much greater in the direction perpendicular to flow.

When fibers are introduced into the plastic, they may counteract shrinkage effects due to molecular orientation. Fibers do not expand or contract as temperature changes, so they will reduce shrinkage in the direction of their orientation.

The underlying cause of warpage is deceptively simple: variations in shrinkage. Simply put, if a part shrinks perfectly uniformly in all directions, it becomes smaller but retains the correct shape. If, however, any element of the part shrinks at a different rate than any other element, the difference creates internal stresses. If these stresses exceed the part’s structural integrity, the part will warp when it is ejected.

In general, there are four types of shrinkage variance.

This occurs when the shrinkage on one side of the cross-section is much different than the other side. This difference in shrinkage can cause the part to bow because one side is able to shrink more and, as a result, will be smaller relative to the other side.

Due to molecular or fiber alignment, differences in shrinkage can occur both parallel to and perpendicular to the material’s orientation, or direction of flow. As mentioned previously, an amorphous material tends to shrink parallel to flow. For materials that crystallize, shrinkage is usually higher perpendicular to flow.

While it’s clear that varying shrinkage rates can cause warpage, it’s also important to understand why these differences occur in the first place. Here are five of the most common reasons:

2. Orientation due to filling

Initially, the orientation of long, stringy polymer molecules is caused by shear stress during flow. When the polymer is still at a high temperature and shear stress is removed, the orientation will relax. (Orientation is locked in only when shearing and freezing occur simultaneously.) When this relaxation occurs in amorphous materials, there is generally more shrinkage parallel to flow. Because the molecules of crystalline materials are aligned in the direction of flow, most crystallization will occur perpendicular to flow, causing more shrinkage in that direction. 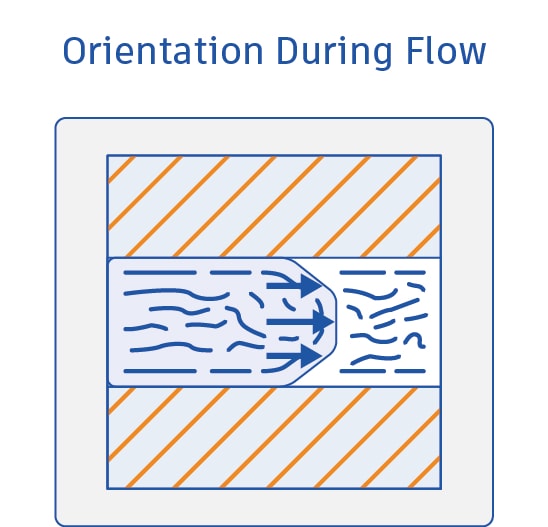 While the part is in the mold, it can’t shrink within the plane of its surface — but it can shrink in the direction of its thickness. This has two effects. First, there is more shrinkage in the thickness direction. Second, the polymer accumulates stresses in the plane of its surface. After ejection, these stresses may relax as the part continues to cool, causing warpage. The higher the mold temperature, the lower the cooling rate, and the more stresses relax from the part. Mold restraint is also material dependent. Materials that resist creep (and relax more slowly) have higher linear shrinkage, while materials that relax more quickly have lower linear shrinkage.

4. Temperature differences through the thickness

When the mold temperature on one side of the cross-section is different from the other, shrinkage will not be uniform from side to side. In essence, the plane on one side of the part will shrink more, causing it to be smaller than the other side creating a bending moment that can lead to warpage. 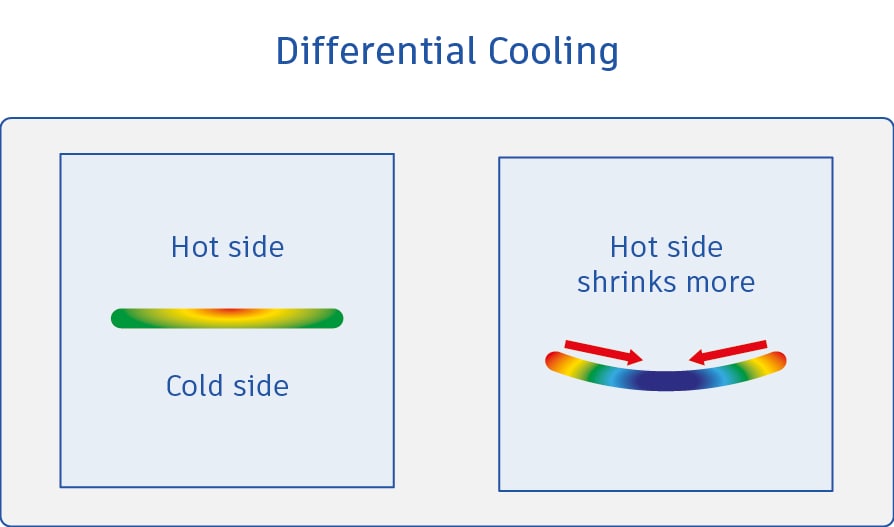 When there are varying thicknesses of the part, thick areas will take longer to cool, which can lead to higher shrinkage. A similar effect occurs with areas that are far from the gate. If a constant packing profile is used, areas closer to the gate will be denser and cool at a different rate than areas further from the gate, causing shrinkage variance. 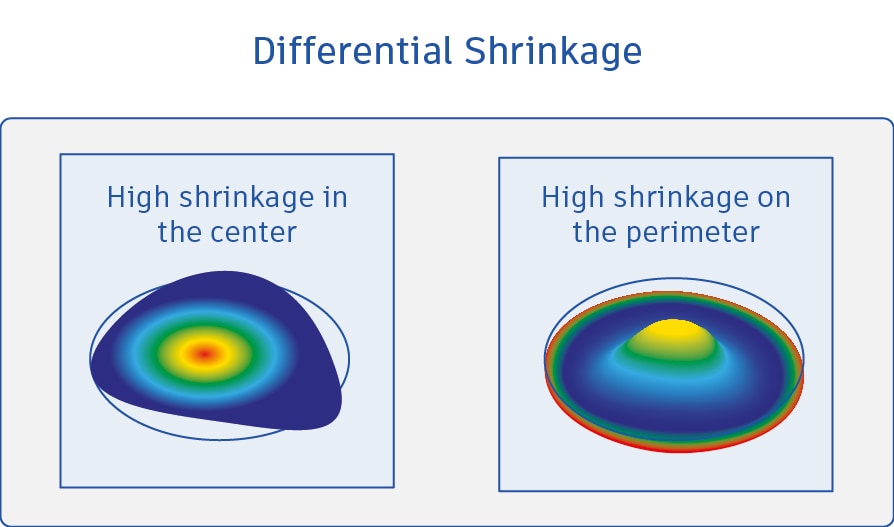 What makes warpage so difficult to diagnose is that there is very rarely one answer. In most cases, multiple effects may be counteracting or exaggerating each other, making it difficult to isolate each effect’s contribution. With a firm grasp of why injection molded parts warp, analysts can be better prepared to run a warpage analysis and find the best way to solve the problem.