Gaining an advantage over the competition

Zachary Wheeler, owner of Zachary Luke Designs, is passionate about transitional design—mixing contemporary and traditional styles for a fresh, modern look. But what’s right for him isn’t always right for his clients. So he always adapts to the style, client tastes, and location of where he will be designing. Before any colors, furniture, or layouts are chosen, he starts first and foremost with AutoCAD, which gives Wheeler the precision he needs to get a competitive edge over other designers.

Kickstarting a career and reimagining a historic inn 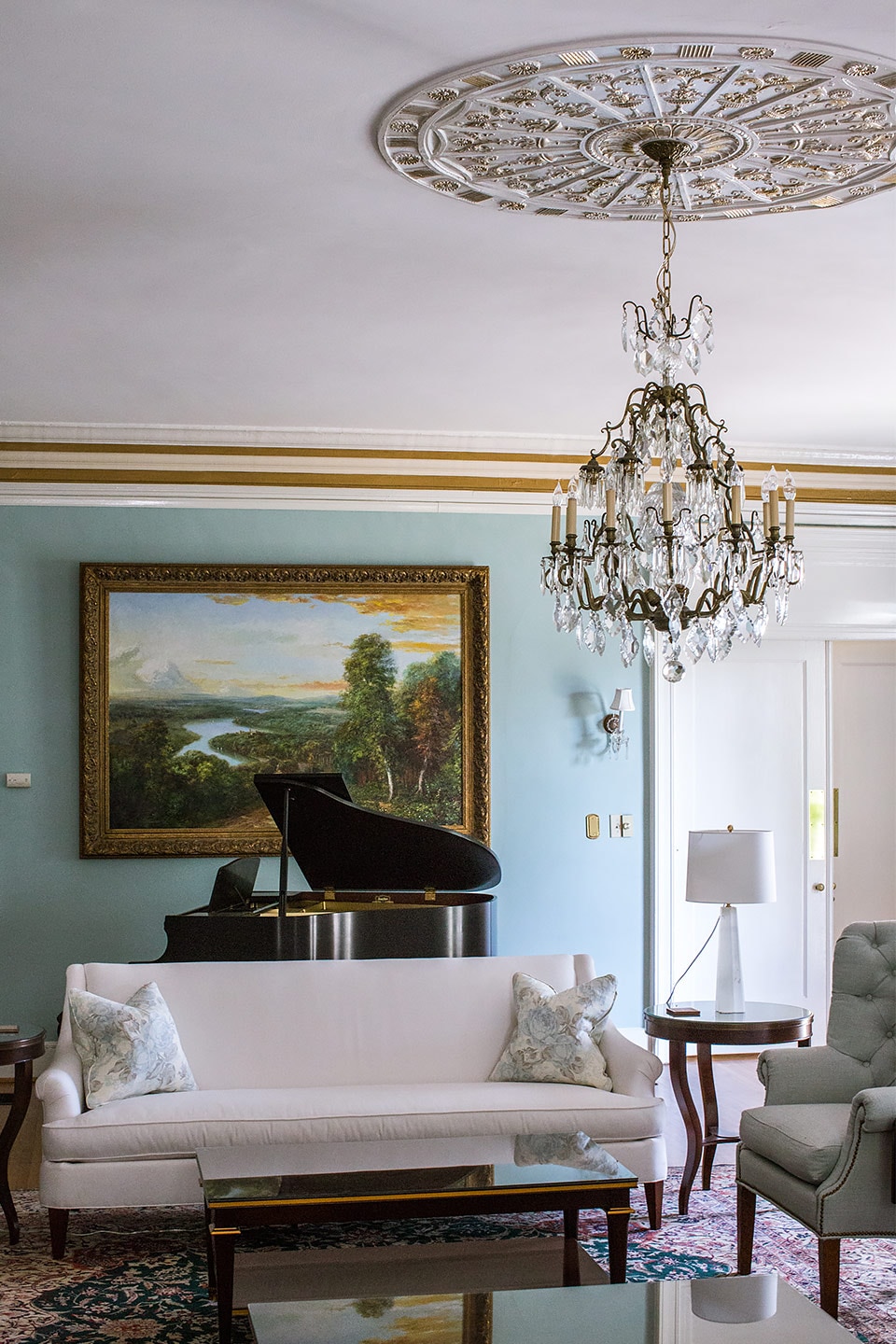 After graduating from Lawrence Technological University in Detroit, Michigan with a bachelor of science in interior architecture and design, Wheeler moved to Charlotte, North Carolina to pursue his interior-design career. He first started college with the intent of becoming an architect. This is where he first started learning AutoCAD after years of hand-drafting experience in middle and high school. But after an internship with an interior designer in metro Detroit and the realization that architecture wasn’t quite his calling, he quickly moved on to a new path. For Wheeler, it wasn’t the shape or structure of the buildings—it was what was inside that mattered.

After working as a lead designer at a local furniture and design store as well as at an online furniture retail company, Wheeler decided to set off on his own and founded Zachary Luke Designs. There was one job that pushed him to take the plunge of founding his own business: The Morehead Inn in Charlotte, North Carolina.

Built in 1917, the inn is a historical, beloved staple of Charlotte. However, the old plaster separated from the second-floor floor joists, causing the great room’s ceiling to collapse. It’s quite literally the heart of the building, and Wheeler received a call out of the blue to meet with the owner. Because insurance was covering the cost of the remodel, the room could take on an entirely new identity—but it had to stay true to its roots. Wheeler got rid of the old green carpet and drab white walls. He chose a fresh blue-gray paint for the walls to bring out a color in the antique Indo Kashan rug that had been at the inn for years. Like all of his other projects, it all started in AutoCAD to find the right place for the baby grand piano that had to stay, the new sofas, the end tables, and more. For Wheeler, it’s where technology and creativity can combine.

Step one is AutoCAD

Wheeler’s burgeoning business takes on a variety of clients, from condos to kitchens, bathrooms, reception spaces, and everything in between. Once the consultation with a client is finished, the measurements are done, and photos of the space are taken, Wheeler’s first step is with AutoCAD.

“Whenever I acquire a new project, I take a good chunk of the day to just focus on design ideas,” Wheeler says. “I’ll draft different floor plans and move furnishings around. I draw all my blocks from scratch, and that’s what I love to do every time. Every single house and room are different. Once I get the shell drawn, then things start flowing. I just start working, and before I know it, it’s been two hours that I’ve been doing my design in AutoCAD. It doesn’t even feel like it because it goes by so fast; it’s almost therapeutic for me.” 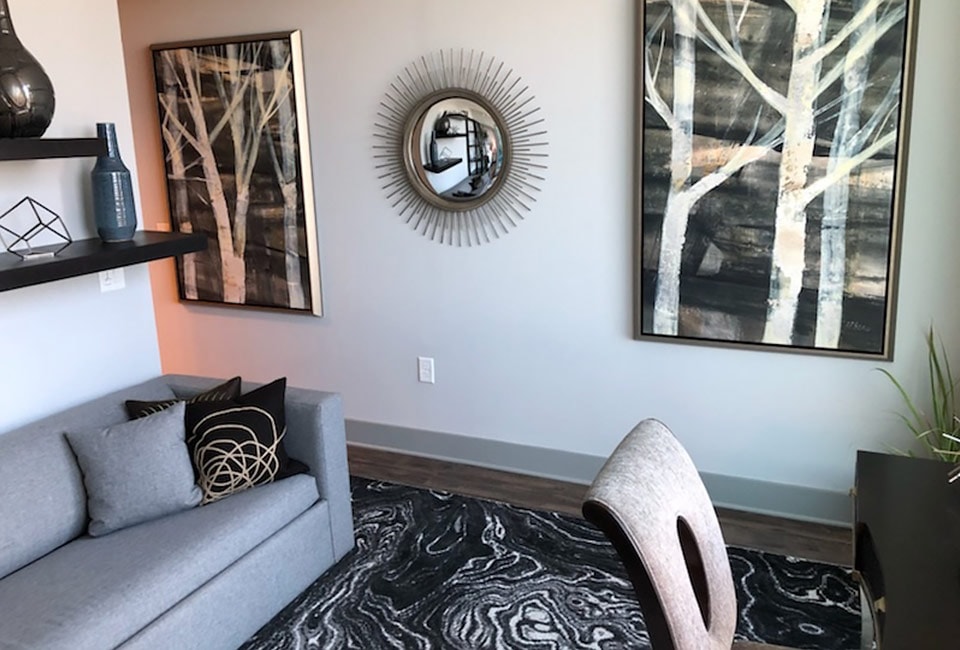 Next, Wheeler chooses furniture and pricing options to present to the client. He finds that just by using AutoCAD he’s setting himself apart from the competition.

“AutoCAD really gives me an edge over other designers,” he says. “Not everyone can use AutoCAD, and many other designers located here in my area weren’t taught CAD. Just the fact that I can tell clients and other designers that I know how to design and draft in AutoCAD is impressive.”

Recently, Wheeler completed a redesign of a condo in the upscale Museum Tower Uptown in Charlotte. For this design of a very open-concept living room, dining area, kitchen, and home office, he used AutoCAD to bring a contemporary vision to life.

“When I first spoke with my client he was set on mid-century modern,” Wheeler says. “But once we started talking about the aesthetics, it really turned out that he wanted a contemporary look. With AutoCAD, I could experiment quite a bit.”

Whenever Wheeler is designing in AutoCAD, there are reliable features that help each time, including Line, Offset, and Hatch. Fillet is especially useful for completing walls and rugs, and Arc for doors and rounded walls. The Copy feature also really helps when doing more than one floor-plan layout, he says.

“For each project, I take the measurements, and it’s down to the quarter inch for accuracy,” Wheeler says. “From there, I can do several different layouts to present to the client. By using layers, I can keep all of those exact measurements, create a layout of the furniture and design, and then simply remove that layer to do another layout.

“AutoCAD really is a quick and easy program for me to use and be able to show clients multiple floor plan options for their homes or businesses,” he continues. “I like everything in my projects to be clear and concise, and AutoCAD helps me convey that to my clients.”

Know the owner, know the project

Due to the long and thorough selection process, the owners and IMCO knew each other well before breaking ground. And as the actual construction proceeded, they established trust in their collaboration process, which was partly due to the extensive use of BIM. 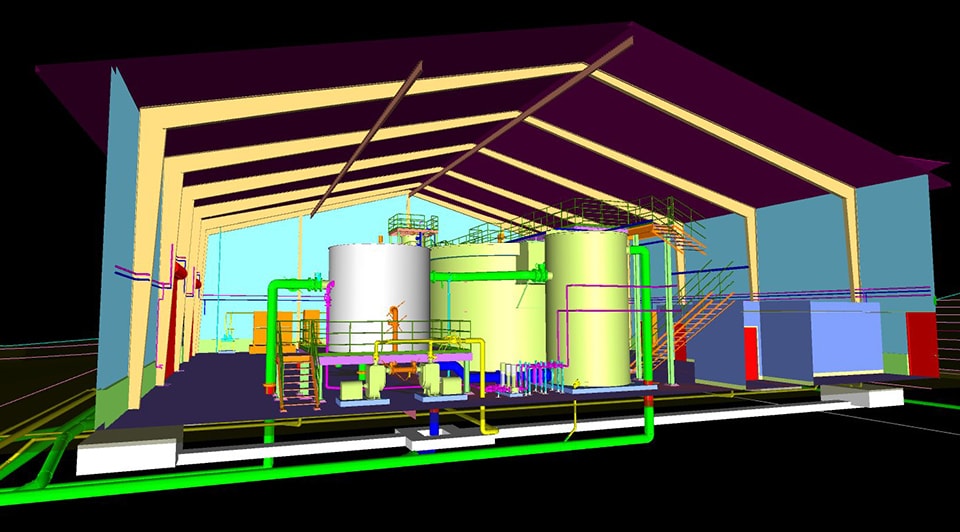 A 3D model of IMCO’s mine water–treatment plant project. Courtesy of IMCO Construction.

“Pictures speak a thousand words, and modeling proved to be a very good tool on this project,” Simmons says. “We were able to put models in front of the owners, show them clashes, and work with them proactively to resolve problems. And we updated models based on as-built laser scanning during construction. That enabled very fast-track construction—we reduced an 18-month timeline to just 8 months. That developed confidence that we were a good choice to operate what we were building.”

Building and operating the mine water–treatment plant provided a virtuous circle of feedback that made for a better project overall. In response to observations made by newly hired operating staff, changes were made during final construction stages. And after the plant was commissioned, the contracting-savvy staff suggested additional modifications for more effective operations.

As a result, IMCO’s foray into this new project territory is something it will want to explore again. “Now that we have the background and résumé, we’ll definitely seek out more contracts like this,” Simmons says. “Especially in mine water–treatment facilities and in remote locations like this one.”

But the biggest impact beyond the improvements to the construction and operation phases was IMCO’s ability to tap into a new O&M revenue stream. By embracing BIM processes in construction, IMCO positioned itself for success in the increasingly connected future of construction.

A version of this article ran previously on Redshift. Photos courtesy of Will Austin.