CAD software for anyone, anywhere, anytime LEARN ABOUT AUTOCAD

When Tyréns AB, one of Sweden’s leading community development consultancies, undertook an expansion project for the largest hospital in Skövde, Sweden, it was the beginning of a major transformation taking the healthcare campus from 160,000 to 210,000 square meters. The project also provides more medical services for the local community, including a new dedicated dental facility. To design and model the new dental space, Tyréns had to be flexible to meet the different needs of each department—and the data-driven capabilities of AutoCAD and the Architecture toolset helped them to deliver smiles.

The foundations of Skövde

Alongside the Volvo engine plant and the city’s University, the Kärnsjukhuset (Central Hospital) is one of the main community pillars of Skövde, Sweden. Already the largest hospital in the Skaraborg Hospital system, its expansion—at a total cost of 400 million SEK ($41 million)—includes updated infrastructure, new drainage, reserve power generators, and even roads. Beyond infrastructure, the expansion also mandated the construction of a dedicated maternity and pediatrics hospital, and a separate dental facility called the Tandvårdshuset.

That’s where Wilhelm Brunius, a CAD Planner in Tyréns AB’s Gothenburg office, and AutoCAD’s Architecture toolset come in. Long before its groundbreaking in January of 2017, Wilhelm was working on the design of the 4-story, 8000-square-meter complex in AutoCAD. “I usually have something to start with,” he explains. “I get a couple of files from the senior architect who draws the master plan, and then I look at the building: what it’s supposed to do, how big it is, and what kind of detailing level we need. Then the next step is to outline all the major components of the building, such as columns, outer walls, and how each floor should look in order to more or less compartmentalize the building. 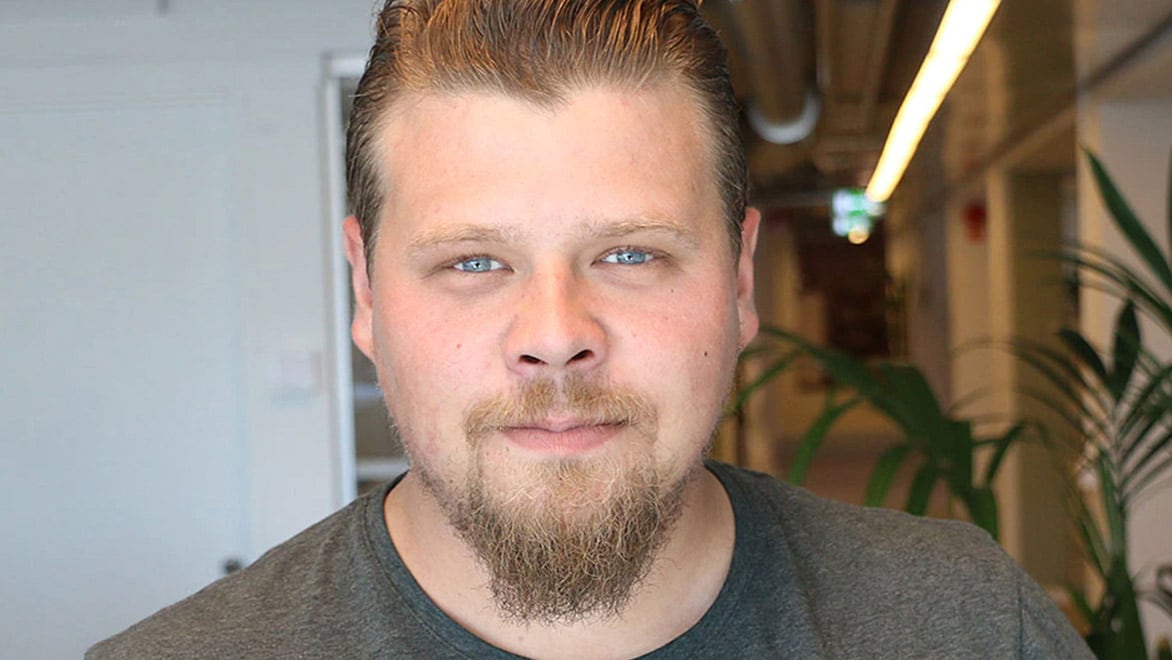 “Next, I look into the kind of output I want: how many meters of this type of wall do we need, how many square meters of this kind of roof do we need, etc. I have to make sure that the output data actually is what we need to get out later on. In a lot of projects, these questions never get asked because the budgets start to thin out, and construction can shift who controls the process. But in the case of Tandvårdshuset, we actually had a builder (Byggdialog AB) that wanted to be more invested in the modeling—and in the digital environment—which gave us the unique opportunity to start using property sets on a broader scale. This was a crucial component for data-driven design in the information model we built. We could easily work with scheduled data and actually used our DWG models as information models.”

The data-driven approach paid off before the build process had even begun, when two of the floors (half of the building) had to be redesigned. “We had to do major redesign of the entire floor, but the floor plan was made to be flexible from the start,” says Wilhelm.

Flexibility in a design is one thing, flexibility of a design is quite another. Luckily, Wilhelm clarifies, the Tyréns team had both: “[We knew] different departments had different needs: Some had greater need for spaces for administrative staff, while others needed more examination rooms. One really good thing was that Agneta Larsson, the architect in charge of the room function program, early on saw the need for a data-driven approach using the Architecture toolset’s Multiview Block References and property sets. She set the requirements and I made sure we could use the data in the model. [The fact that] Multiview Block References are easily interchanged had a great impact on how much work needed to be done to change department-specific equipment. Secondly, handling Property sets of room-specific information has always been straightforward in the Architecture toolset.” 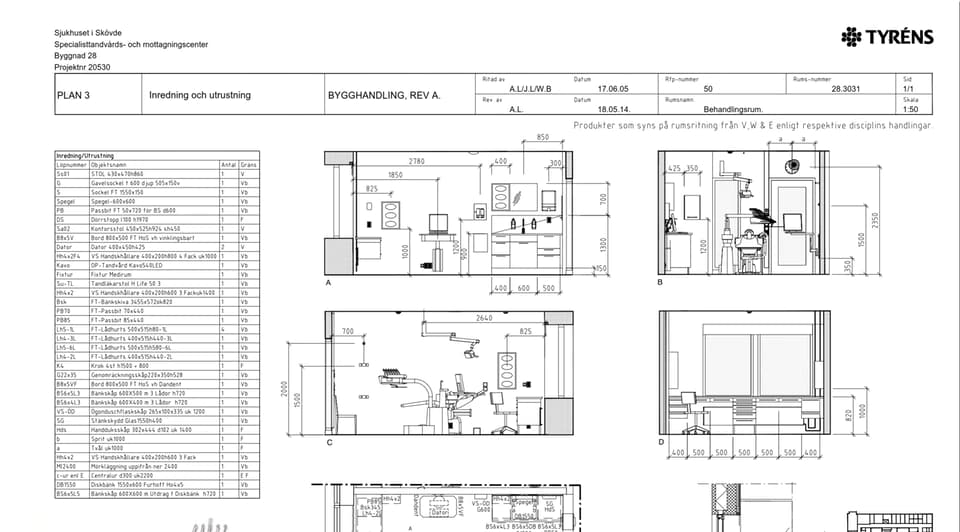 One last check up

And changes, when—not if—they come, have to be handled seamlessly. In a project as complex as this one, automation was a must. “Usually we’re uploading our files to some sort of project portal, and then we use the DWG format to Xref the files. For Tandvårdshuset, room views/elevations were required for almost every single room in the building. That’s something like 2,000 or 3,000 views.

“We wanted to automate the process in as many places as possible. So, basically, in order to be sure that we’d received the correct geometries from the different consultants, we used their DWG (and IFC) files—and yeah, I learned a whole lot about how to script,” he laughs.

As with any trip to the dentist, there may have been a bit of pain involved. But thankfully—and with a bit of help from AutoCAD and the Architecture toolset—the Tandvårdshuset project ended with a smile for Wilhelm and the architecture team at Tyréns. 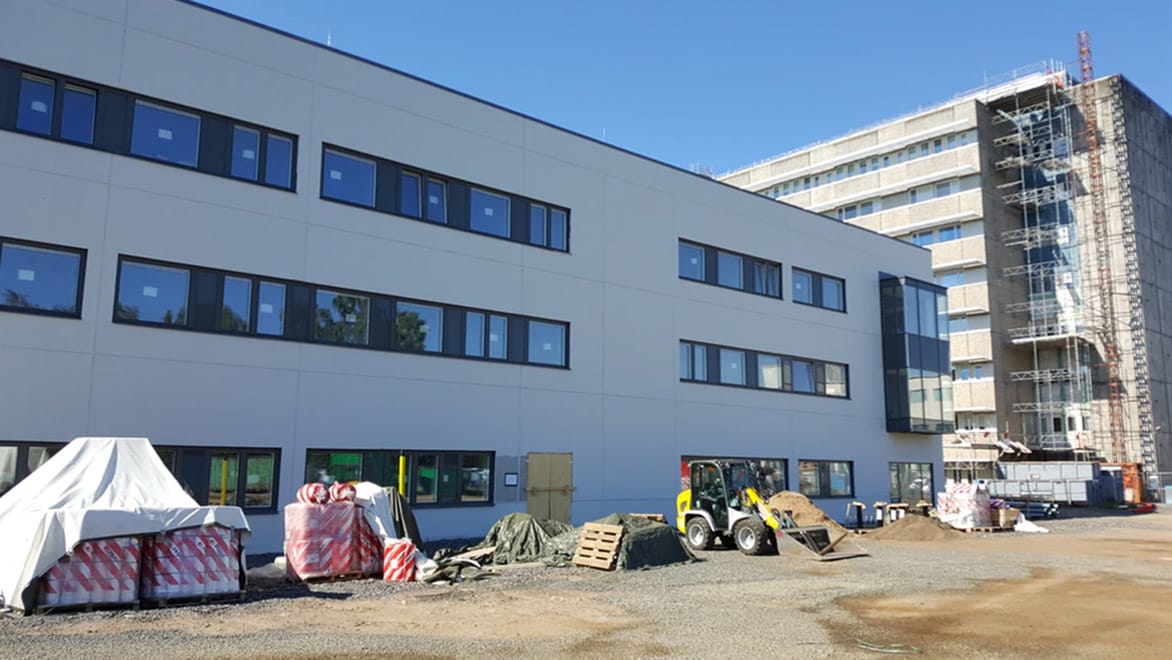 Speed up and streamline your workflow

GET THE AUTOCAD ARCHITECTURE TOOLSET