Building the world’s most sustainable winery

Ten years ago, Silver Oak Cellars overcame devastating loss to open the world’s first LEED Platinum-certified winery in Napa Valley, rebuilding in the aftermath of a terrible fire. Now, in April 2018, this family business is opening a second green winery in Sonoma County’s Alexander Valley. The new facility was built to meet the most rigorous performance standards, including LEED Platinum and Living Building Challenge certifications. Using innovative solutions for water management, energy, and lighting, coordinated with BIM (Building Information Modeling) processes, these vintners are setting a new standard of sustainability for the wine-making industry.

A devastating fire creates a new opportunity for a California winery

In 2006, a fire severely damaged Silver Oak Cellars’ winery in California’s Napa Valley, destroying its facilities and an estimated $2 million worth of wine. For this longtime family business, the immediate aftermath was emotional, as the owners surveyed the damage and absorbed this grievous loss. But the family soon realized that the fire had given them an opportunity to rethink their business and bring a proverbial phoenix out of the ashes.

The winemakers’ first major decision after the fire was to rebuild as soon as possible, and the second was to do it sustainably. The result of this effort was a redesigned facility in Napa’s Oakville region that achieved LEED Platinum certification, the first production winery in the world to earn that status. Now, a second phoenix has risen, 10 years later, to match the first.

Silver Oak’s newest facility, opening in April 2018, sets a new standard of sustainability for the wine-making industry. The brand-new winery is in Alexander Valley, a viticultural region in Sonoma County known for the quality of its Cabernet Sauvignon and Merlot. Employing solar power, efficient LED lighting, and a water filtration system, the winery is also on track for LEED Platinum certification—becoming only the second winery to earn that status after the Oakville facility. The project is also aiming to earn certification under the Living Building Challenge for four out of seven possible “petals”: for energy, water, health and happiness, and beauty. 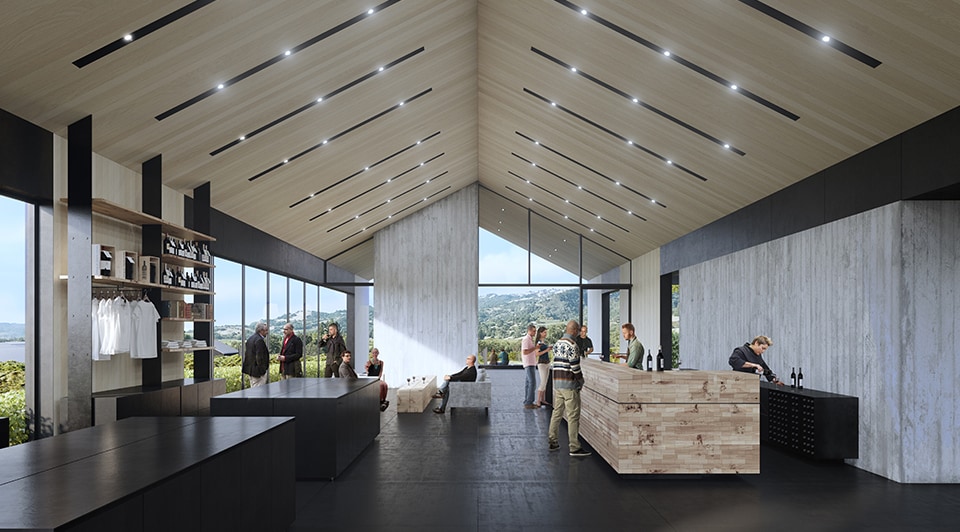 “Stewards of the land” benefit from advances in sustainable technologies 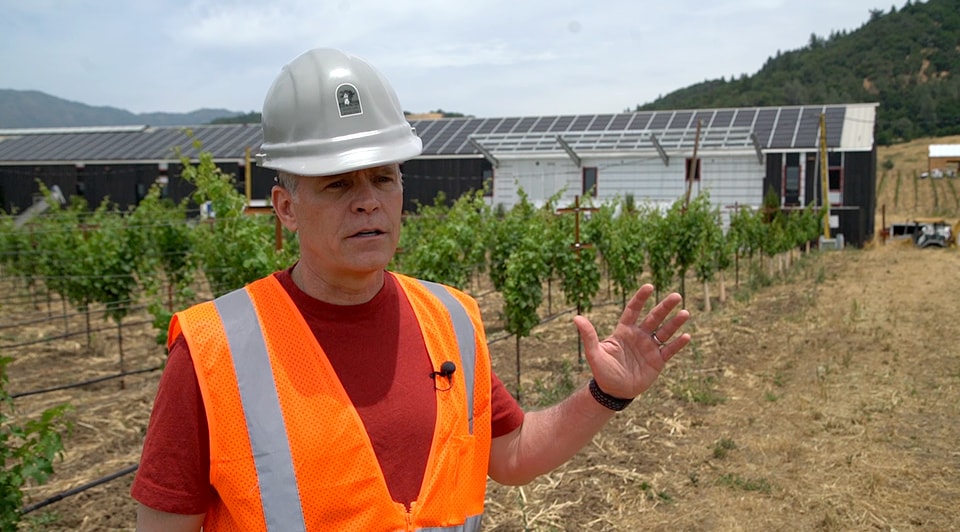 Silver Oak Cellars began as a partnership in the early 1970s and has been under the sole ownership of the Duncan family since 2001. “Being stewards of the land, taking care of our vineyards, and trying to do all we can to protect what is our only home is something that is sort of in my heart,” Silver Oak CEO David Duncan says. “Water conservation and the lack of pesticide usage, all those things that go into what the general public thinks about sustainability, fit right in with what we do.”

Sagan Piechota Architecture led the building design of the new Alexander Valley facility, with Cello & Maudru Construction serving as the general contractor. In addition to sustainability and functionality, aesthetics were important to Silver Oak. Plumbing and catwalks were laid out in a symmetrical, pleasing way, and the facility increased daylighting through skylights and other measures. Reclaimed redwood from 85-year-old wine-fermentation tanks was reused as external siding.

For task lighting, technology has advanced remarkably: Energy efficiency that would have been difficult or cost-prohibitive for a winery operation now is doable. Every task light in the facility is LED, for example—which would have been three times the cost just a decade ago, according to Duncan. The bulbs need to be changed so infrequently that it’s almost a nonissue going forward. 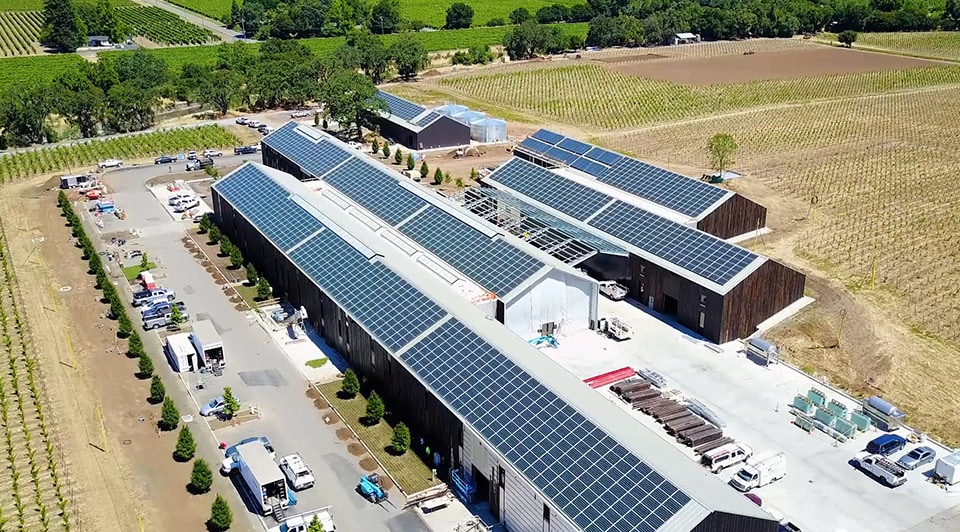 The entire western face of the winery and the tasting room is covered with solar panels, with the goal of enabling the facility to operate off the grid.

Solar has similarly become more cost-effective. “Ten years ago, solar panels had a payback of seven to nine years,” Duncan says, “and we think these are going to be more like three or four [years]. Things have advanced that much in a short amount of time.”

Sustainability, for Duncan, is first and foremost about wine quality. It takes a lot of water to produce wine, so water conservation and reuse are of paramount importance. The team worked with TEP Engineering to design a central hot-water system that uses solar thermal energy and CO2 heat pumps to provide heat for the domestic-, production-, and recycled-water systems, in addition to the warm-glycol system, which helps control wine temperature.

“This is the first project to my knowledge that uses recycled hot water, which is ideal for winery-production facilities because it typically requires around 6–14 gallons of potable water to produce one gallon of wine,” says Andy Souza, PE, LEED AP, a plumbing engineer with TEP. “Silver Oak is attempting to reduce this winery’s production-water use by using recycled water for initial barrel and tank washing and floor cleaning, to get the production potable water requirements down to two to three gallons to produce one gallon of wine.”

Meeting the challenges of sustainable building with BIM 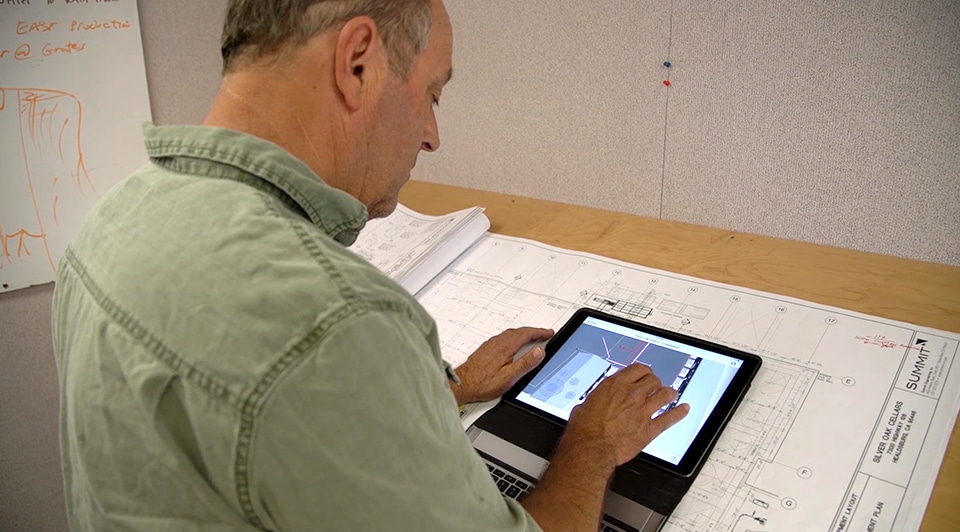 3D models, available via iPad in the field, were used to communicate the unique requirements of the materials used on this project to subcontractors.

“Money is a resource,” Duncan says. “Green at any cost doesn’t prove anything.” Coordinated BIM models created with Revit helped the bottom line, allowing the team to identify and address problems on a screen rather than during construction. “We fixed many, many problems on the computer that normally you would fix in the field,” he adds. “We think it saved us hundreds of thousands of dollars.”

With so many elements, the team also used BIM 360 Glue to ease team collaboration. “We used that in larger subcontractor coordination meetings to look at the scope of work and how it pertains to schedule,” says Adam Katz, a project engineer with Cello & Maudru. “We have also issued iPads to all our foremen and superintendents and used those with 360 Glue for reviewing the model in the field, in real time, to look at assemblies and help coordinate subcontractors.”

Another innovative feature was the use of reclaimed denim as insulation material. “All the insulation in the office spaces is recycled Levi’s, which is actually kind of fun because I pretty much only dress in Levi’s,” Duncan says. Modeling helped the team to understand the different thermal and dimensional properties of denim insulation versus standard fiberglass or foam materials. “We have used the software coordination to express those different thicknesses,” Katz says, “and how layouts and different construction assemblies come together in a nonindustry-standard way.”

“Our building should be obsolete from the minute we finish it,” Duncan says. “Because the next person who builds a winery project like this can learn from us and do it even better.” Based on Silver Oak Cellars’ sustainable track record, there’s a good chance that the next winery that does it better will be Silver Oak itself.

Are you ready to build more sustainably?

The Architecture, Engineering & Construction Collection gives you access to a set of integrated BIM tools that enable faster, more efficient delivery on your green building project.