Realize your best building-design ideas with integrated software tools. FIND OUT HOW

What makes a community vital?

Bangkok, Thailand is one of the most visited places in the world, with amazing food and culture, tourist-friendly markets and palaces, great shopping, and booming nightlife. But—as is true of life in other big cities—its residents also deal with issues of social isolation, lack of access to green spaces, and other urban woes.

Magnolia Quality Development Corporation (MQDC), a Thailand-based real-estate developer, recognizes that potential home buyers might want more than just a building complex and created an integrated 17-acre campus called WHIZDOM 101. The company calls this venture The Great Good Place, after sociologist Ray Oldenburg’s 1989 book, which posits that to live well, a balance between home life, the workplace, and sociable “third places” to build community is crucial. WHIZDOM 101 is a sustainable smart city within a large metropolis designed to help residents lead more efficient, healthier, and more fulfilling lives through innovation and technology. 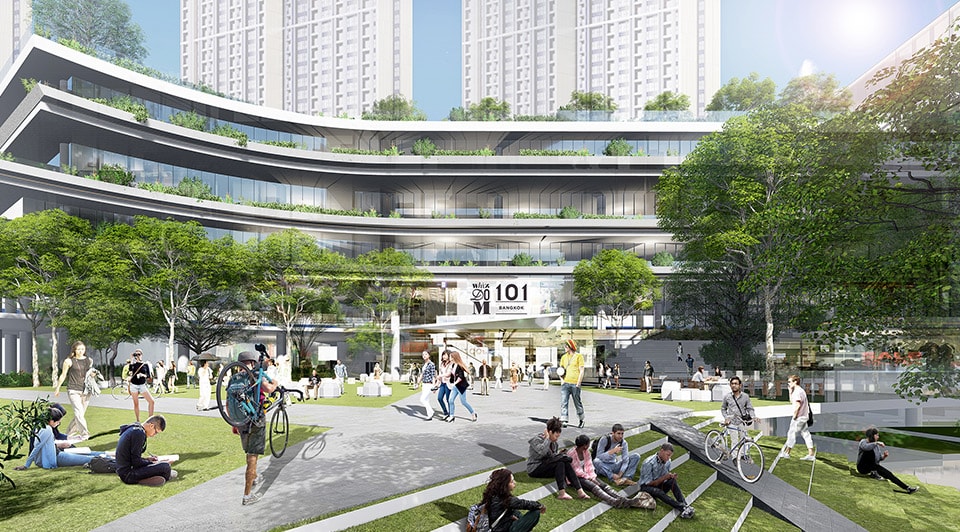 A view of the park at MQDC’s WHIZDOM 101 complex, part of the green space designed to enhance the microclimate and bring people closer to nature. Courtesy of Magnolia Quality Development Corporation.

“Before we start a project, we normally take a year or two to study what would benefit the people around the project,” says MQDC’s President Khun Suttha Ruengchaipaiboon, a civil engineer with more than 26 years of experience in real-estate projects in the United States and Asia. “People—we call them that ‘new generation’—we interview them, and we find out about things like what they enjoy doing during their free time.”

The design of the 17-acre WHIZDOM 101 complex includes green spaces and community amenities that support a balance between home, work, and social spaces.

A 2017 Autodesk AEC Excellence Award winner for sustainable design, the WHIZDOM 101 project is geared toward younger city-dwelling professionals and emphasizes values of health, the environment, and social responsibility. The campus, set to open in mid-2018, will contain a jogging track, bike track, library, and green space, along with a street lined with businesses and restaurants. It offers an improved outdoor microclimate through strategic use of trees and plants and an indoor controlled climate, managed through both passive and intelligent active systems. The smart systems control room conditions, lighting quality, carbon-dioxide levels, and real-time energy consumption. Residents can use an app to adjust home cooling and heating, pay utilities, and even order food delivery in a single platform.

To fill the need for a third place, the design emphasizes outdoor spaces to relax with friends, go shopping, and enjoy nature. Designed with more than just humans in mind, MQDC’s green space will host an entire healthy ecosystem to draw in more birds and animals.

“‘Smart city’ has a lot of meanings,” Ruengchaipaiboon says. “But for us, it’s a smart city for the community—for the people. We call it a ‘smart community.’” One ingenious way that WHIZDOM 101 brings together smart technology and community is through the energy- and data-collecting floor tiles at the entrance to its campus. The tiles convert kinetic energy from human footsteps into low-voltage electricity, which can be stored and used to power LED lighting, wayfinding solutions, and mobile-device chargers. “When [visitors] come into our project, they are creating alternative energy with us,” he explains.

“Sustainovation” as a core value 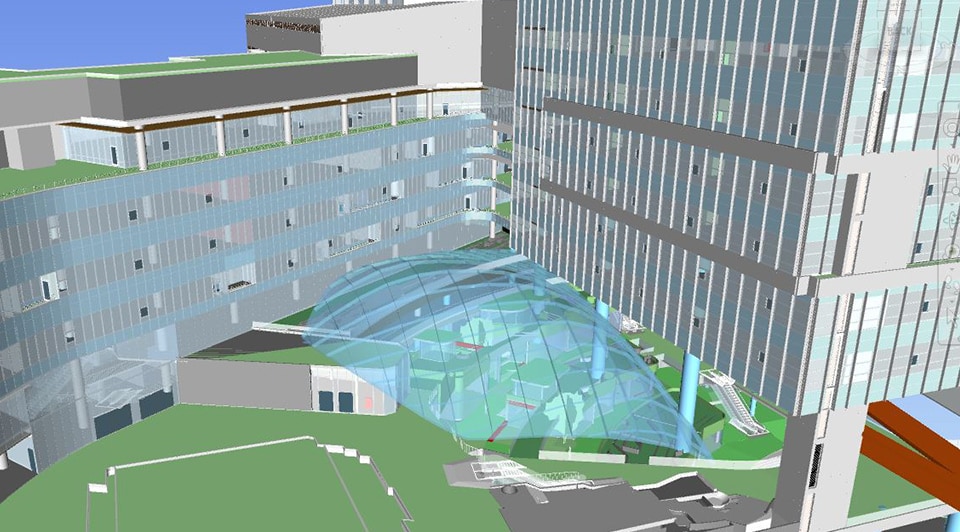 MQDC used BIM models to analyze the impact of building orientation, design, and energy consumption on the microclimate of the WHIZDOM 101 campus. Courtesy of Magnolia Quality Development Corporation.

According to Ruengchaipaiboon, one of MQDC’s core values is to make every project sustainable using innovative technology. It calls this approach “sustainovation,” for sustainable innovation. “As developers, we’re well aware that we can create a positive or negative impact on this world,” Ruengchaipaiboon says. “So we ensure that each project has minimal impact on the environment, society, and people at large.”

To reduce that net environmental impact, the firm uses fewer construction materials while opting for eco-friendly building materials and methods. The WHIZDOM 101 condominium tower, for example, is strategically positioned to allow for better natural airflow and light and less heat from the sun, increasing energy efficiency. Ruengchaipaiboon says that “if we can position the tower to draw in the natural light and wind, people will use less energy, including less air conditioning.”

To attain LEED Gold-certification standards, MQDC implements energy- and resource-saving measures. “We have to reduce energy use by 30 percent,” Ruengchaipaiboon says. “We also must target to reduce water usage by 40 percent. We do this by collecting and reusing water on-site, and we have the goal to reduce CO2 emissions by 15,000 tons per year, which is about 30 percent, comparable to a project about one-tenth the size of ours.”

MQDC balances environmental concerns with a people-centered design approach that promotes residents’ health and well-being. For example, the condominiums feature a ventilation system called ERV, or energy recovery ventilation. ERV works while you sleep, drawing carbon dioxide out of the room and replacing it with fresh air from outside. “You get better oxygen while you’re sleeping, and you’re rested when you wake up as a result,” Ruengchaipaiboon says.

Green construction made easier with BIM 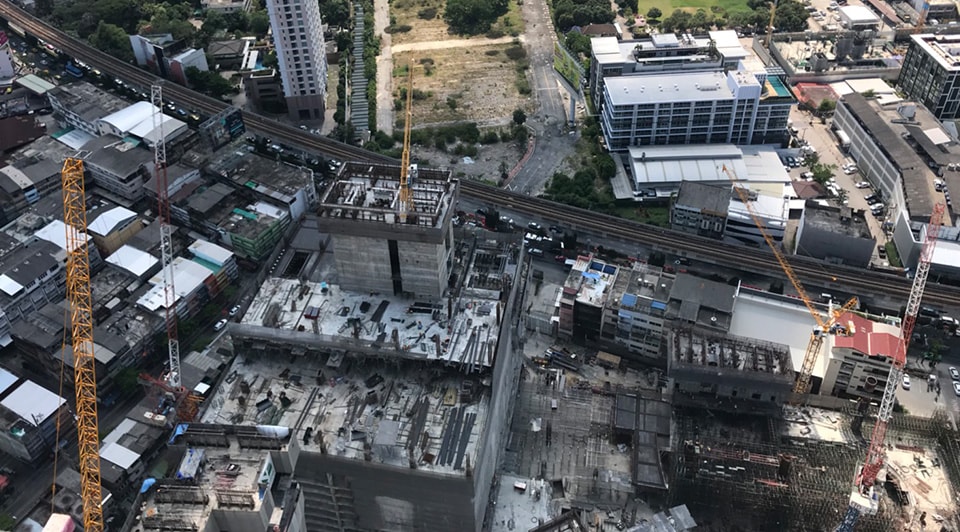 WHIZDOM 101, shown under construction, is located near a BTS Skytrain line (running through the center of the photo) and other mass transit to support the project’s goals for quality of life and sustainability. Courtesy of Magnolia Quality Development Corporation.

MQDC has made serious investments in technologies that modernize design and construction and has been working with local designers, engineers, consultants, builders, and suppliers to reengineer those traditional processes. Case in point: At the start of the project six years ago, those stakeholders weren’t equipped for BIM (Building Information Modeling) and were concerned that adopting the process would add more time and cost.

“I’d been using BIM for the past 20 years before coming here to MQDC,” Ruengchaipaiboon says. “I said, okay, we’re not going to use BIM 100 percent on day one. We asked the team to participate in a few projects using BIM to get started. My goal was that they would see the benefits very quickly, and it turned out to be true.”

The team introduced BIM technology gradually, starting with architects and structural engineers using Revit to develop and coordinate the designs. This success extended to working with the contractor and supplier during preconstruction, which helped reduce change orders and material cost.

“In the construction industry, construction sites around the world generate about 15 to 30 percent waste material,” Ruengchaipaiboon says. “By using the BIM process in our development, we can reduce waste by up to 15 percent, so that saves a lot of energy, saves a lot of material.”

Each step in the construction process has been photographed and implemented into a BIM 360 model, so all pipes, electric, walls, and every position of every part are accounted for. At the close of the project, the BIM as-built model will be handed over to the property managers, so instead of a 2D drawing, they’ll have a 3D model to maintain the site.

Looking ahead, MQDC is researching a project that will cater to multiple generations. Ruengchaipaiboon says creating mixed-use communities to improve the quality of life is a growing trend for MQDC.

These smart communities could give people more opportunities to spend time outdoors, interacting with nature and their peers. Social interaction is key to a city’s vibrancy, and sustainovation is setting the stage for more great, good places across Thailand. 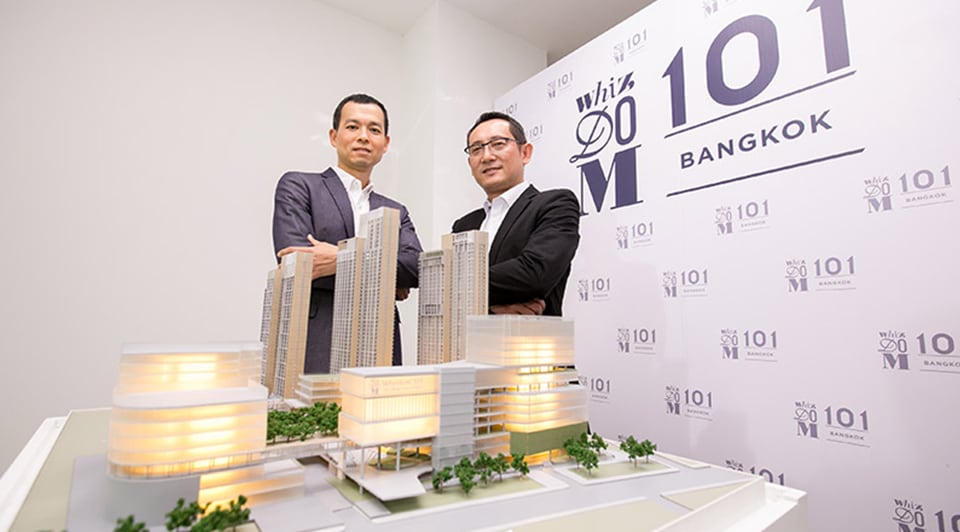