Interior designer relies on AutoCAD to break into new space

AutoCAD lays the foundation of a dual design career

Since teaching herself how to use AutoCAD in 2016, Liza Kuhn has launched her own interior architecture, design, and decorating business, Liza Kuhn Interiors. Using AutoCAD, Kuhn expanded her repertoire from high-end residential spaces to now also include Instagram-worthy commercial properties.

A lifetime of experience

One of the most common questions clients first ask Liza Kuhn is how long she’s been “in design.” The answer is simple: “my whole life.” Growing up, Kuhn’s family moved eight times and fixed up every house they lived in. Designing was as much a family trade as it was a trait—her father used to frame homes and her uncle is a contractor.

As an undergraduate student at Princeton University, Kuhn found architecture. “It was the perfect fit, given how I’d grown up,” she says. After graduation, Kuhn worked for a general contractor focused on residential sites. “I fell in love with the interior side of things, and a light bulb went off,” she recalls. Kuhn enrolled in Parsons for a Master of Fine Arts in Interior Design and simultaneously interned with award-winning designer Victoria Hagan doing high-end custom residences in the design and decorating sectors. 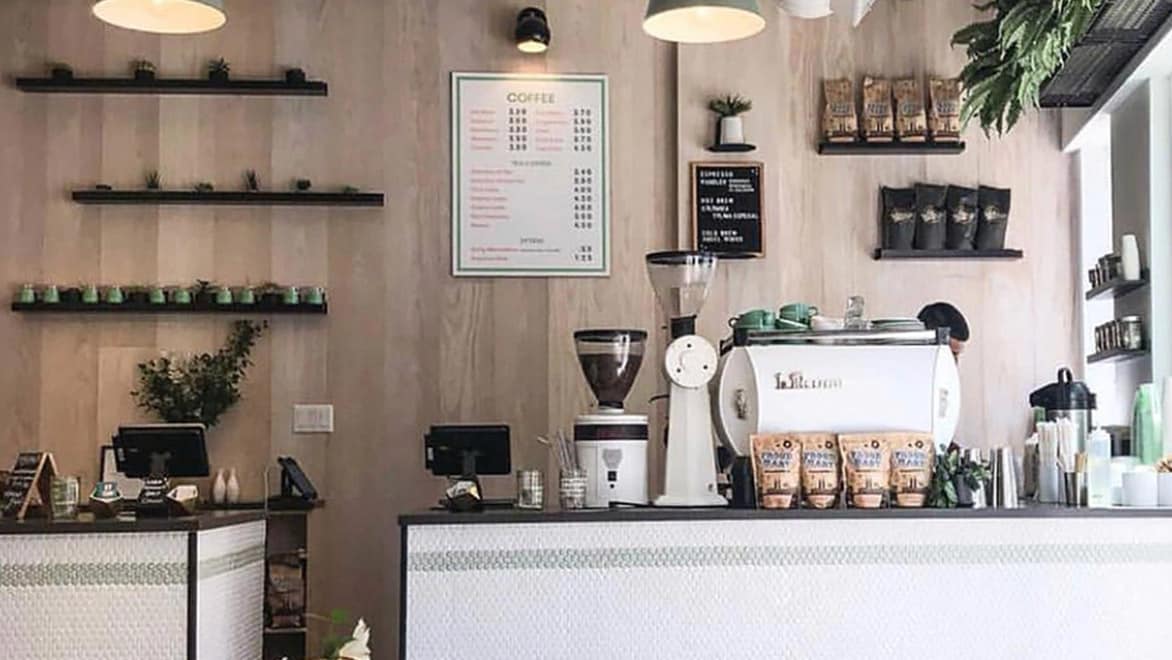 By this point, it became clear that, despite having learned other CAD software during her undergrad, the demands of her job required that she learn AutoCAD. “Six months into teaching myself, I started being able to use it for work,” she says. After two years of working with Victoria Hagan, Kuhn moved on to Pembrooke & Ives, named by Architectural Digest as one of the Top 100 interior design firms in the United States. Here, she honed her AutoCAD skills by enrolling in an online AutoCAD course and designing the interior architecture of high-end homes.

Shortly thereafter, Kuhn began teaching hand-drafting interior design classes at Parsons, part-time. “Every time a student asks what software they should be using, I always suggest AutoCAD,“ she says. “I think it should be mandatory to learn because it is an industry standard. It's so much more efficient being able to lay in imagery of actual objects and to collaborate with other architects and designers. I use it from start to end in the design process." 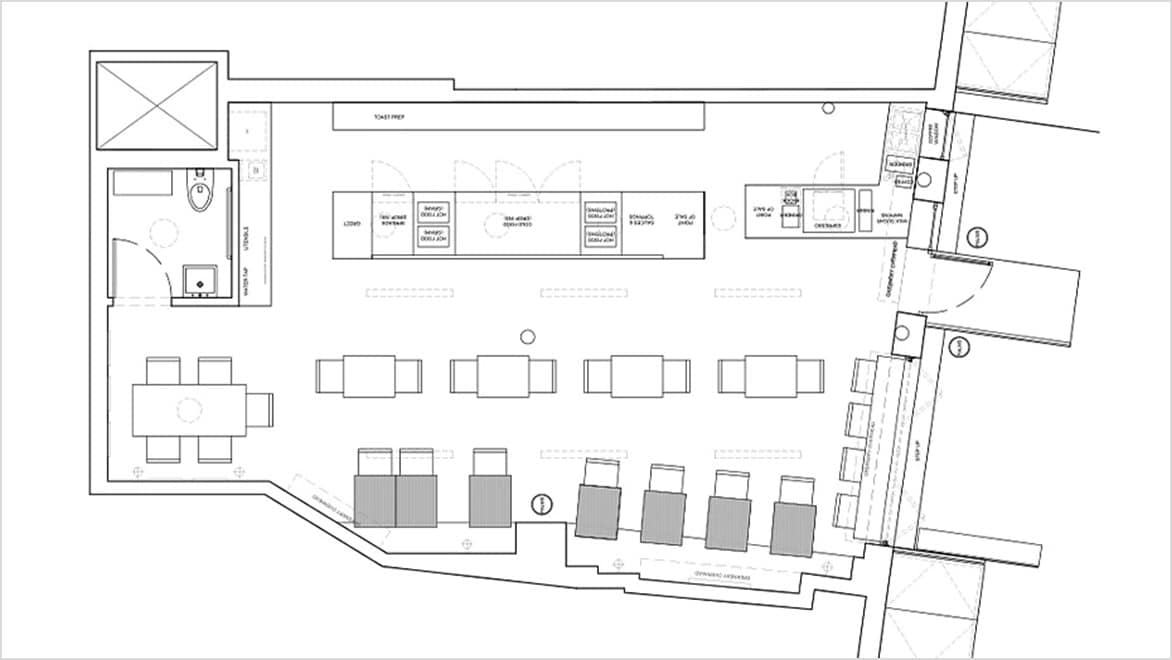 Designing for an impressive first impression

Kuhn’s portfolio entirely consisted of private homes when she was approached by a friend who was invested in an Australian café, Charley St. “What started as a review of the floor plan quickly turned into taking on my first hospitality project.” Being the first commercial space for Kuhn wasn’t the only challenge. “It was a quick timeline. I was brought on in February and they wanted to open before the Fourth of July.” By this point, Kuhn’s own interior design business, Liza Kuhn Interiors, was less than a year old.

Before they could get a building permit, Kuhn first had to draw an architectural plan in collaboration with the project architect. “Using AutoCAD made it a lot easier to ensure the layout would meet code requirements, specifically offsetting lines for furniture layout and clearances,” she says. “And where I didn’t need a clearance, I could select a part of the architecture and stretch it to meet code and design around that, whereas in other programs I've used, it's definitely more rigid. You would have to rebuild the architecture around it.” 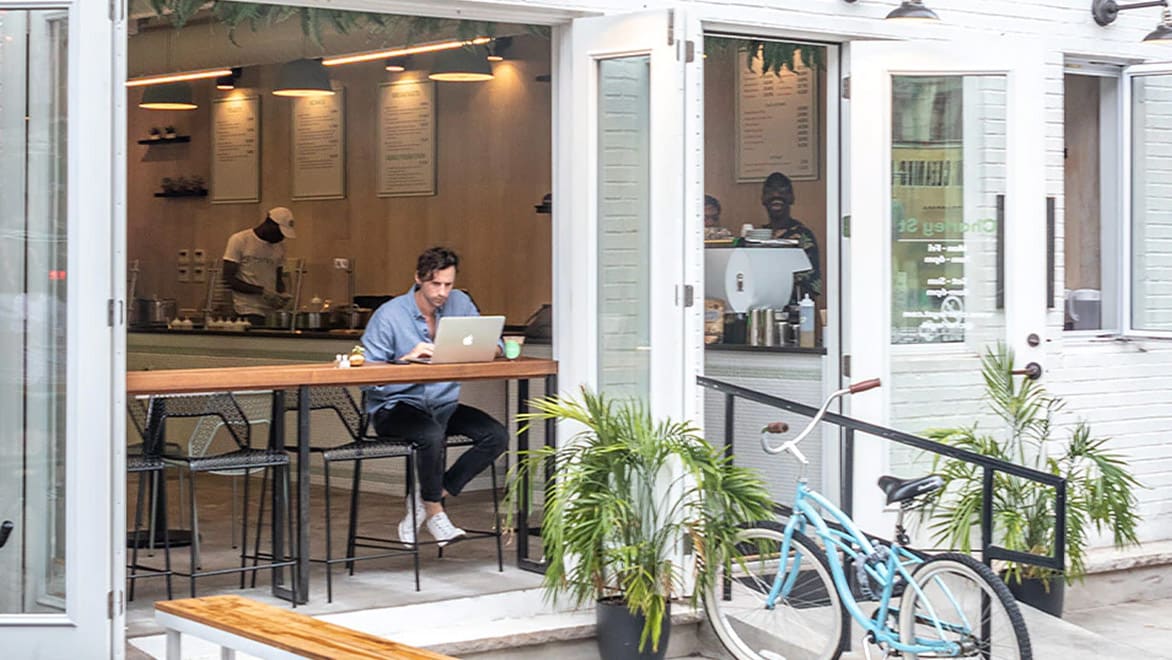 The biggest challenge with the space itself was a lack of natural light. “The original space mimicked that of a garage–complete with a garage door for entering–where any farther than ten feet back was too dark, so we did a lot of drawings of the façade,” Kuhn says.

Sharing AutoCAD files with the architect, contractor, and client, Kuhn frequently used xrefs and image clipping and attaching. “When designing the main elevation where you walk in, I drew in the Charley St logo, rendered it in AutoCAD, and scaled the image to the exact dimensions as it would appear on the wall,” she explains.

After the façade design came the interior architecture. Demolition began with just three months to go and Kuhn’s team hit a brick wall—literally. “We relied on AutoCAD to figure out how to detail built-in seating alongside the wall, draw it quickly, and send it to the contractor for construction,” she says. “We were issuing sketches and elevations a day before things were being built. Working with AutoCAD allowed us to move fast.”

“AutoCAD is so much more efficient for laying in imagery of objects and collaborating with other architects or designers. I can use it from start to end in the design process.”

The final stage involved installing the furniture, interior fixtures, lighting, and accessories. “We got into very specific placement of every item, using AutoCAD to dimension each element.”

Not only did Kuhn need to design fast, but also the space needed to be eye-popping enough to share on social media. “That was one of the big criteria for the client, so thinking about how the space could be photographed dictated certain materials we selected,” Kuhn explains.

On July 4th Charley St had its debut opening, and Kuhn credits AutoCAD for helping to meet the deadline. “It was the fastest and most efficient way to update plans in real-time and to collaborate with the architect, contractor, and client. For example, using the plot setting to print specific dimensions in red alluded to information that the contractors had to pay close attention to.” 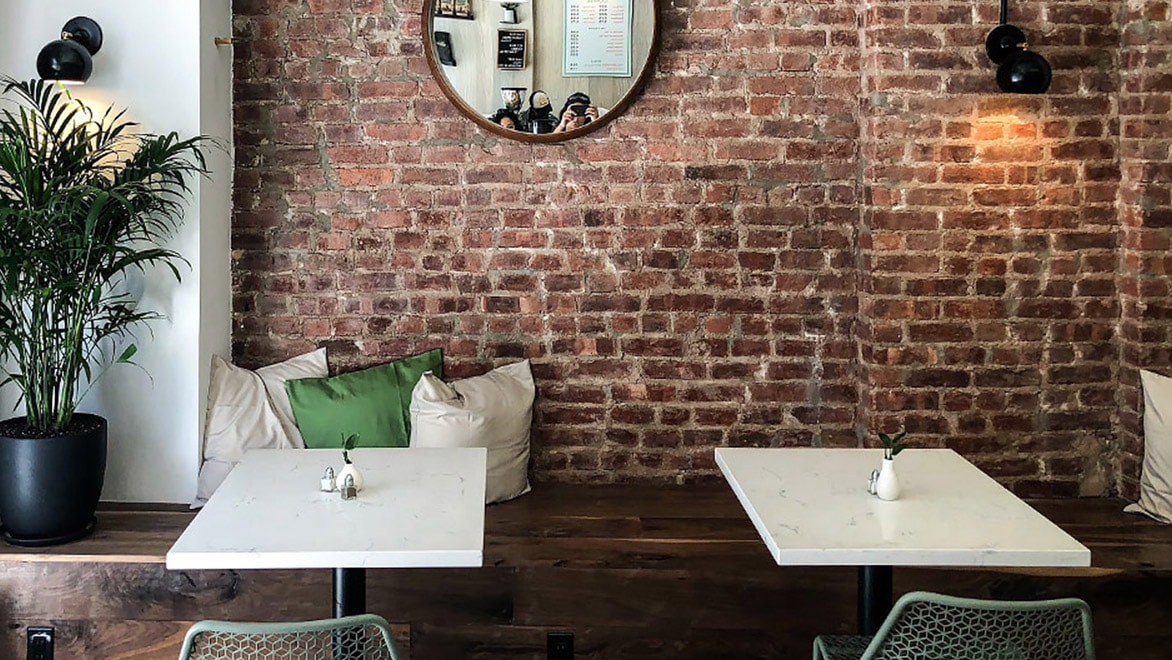 Since last July, there has been discussion of one or more Charley St locations opening this year. And Kuhn is ready to take them on with valuable lessons learned for her next foray in hospitality interior design. “Unlike in residential interior design, here I’m designing for a brand. The client may not know exactly how they want the furniture or space laid out, but they certainly know how they want the space to feel. It’s up to me to put all of the pieces together and to create a space that augments brand identity and functions beautifully.”