THE FUTURE OF MAKING THINGS

Technology is transforming car design. FIND OUT HOW

Global automaker General Motors is taking a big leap forward in automotive design to imagine a future of lighter, more efficient, and customizable cars. Using generative design powered by artificial intelligence and cloud computing, GM is exploring arrays of design solutions for parts and components of vehicles. With additive manufacturing, the company can affordably and efficiently make complex parts and unique components to customize vehicles. Together, these technologies are helping GM deliver better performance and more options than ever to customers.

The growing potential of additive manufacturing

Actually, yes. In 2015, Detroit-based start-up Local Motors introduced the Strati roadster, an electric two-seater featuring 75 percent 3D-printed parts. In 2016, Divergent 3D, a Los Angeles start-up, followed suit with the Blade, a 700-horsepower “supercar” with a 3D-printed body and chassis. And later this year, Italian start-up XEV will start making the LSEV, a small electric car that, according to the company, is the world’s first mass-producible 3D-printed vehicle. 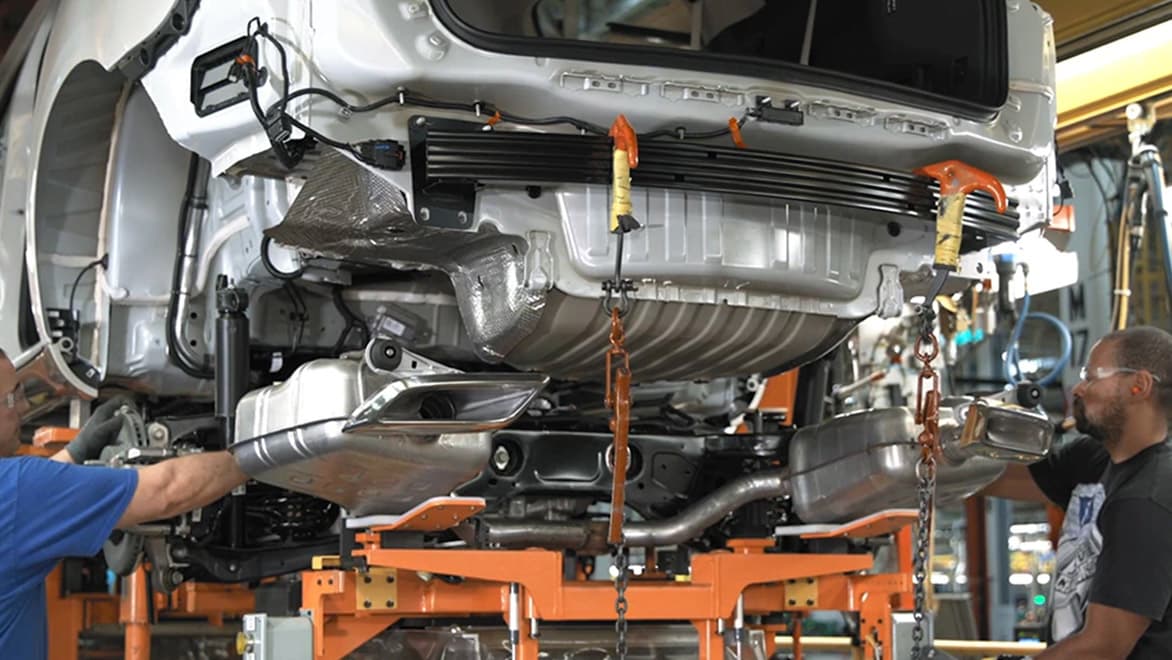 GM is investing in additive-manufacturing technology so that workers on the factory floor will be able to assemble cars from components fabricated using both traditional methods and 3D printing.

But it’s not just upstarts and experimentalists working with 3D-printed automotive design. Instead of pumping out headline-grabbing proofs of concept, traditional automakers are investing in incremental upgrades and tangible improvements. General Motors embodies this approach, designing 3D-printed components that offer increased performance, customization, and personalization.

“On average, there are 30,000 parts in every vehicle,” says GM Director of Additive Design and Manufacturing Kevin Quinn. “We’re not looking to print all 30,000 pieces. Instead, we’re being very realistic. We’re focused on production opportunities where we can provide a business value for GM and for the customer. For us, it’s not about what you can do; it’s about what you should do.”

If additive manufacturing were a door to the automotive future, generative design would be the key to unlock it. “Generative design is a way for us to explore different design solutions for parts and components of our vehicles by using the cloud and artificial intelligence to combine the engineer and the computer,” Quinn says. “By getting them to work together, we can come up with part-design solutions that would be impossible to generate with either the computer or the engineer working on their own.”

With this model, engineers establish component-design goals and constraints—including parameters such as materials, manufacturing methods, and budget—and then input them into generative-design software. The software then uses an algorithm to analyze and evaluate all possible design permutations and recommends an optimal solution based on its calculations. 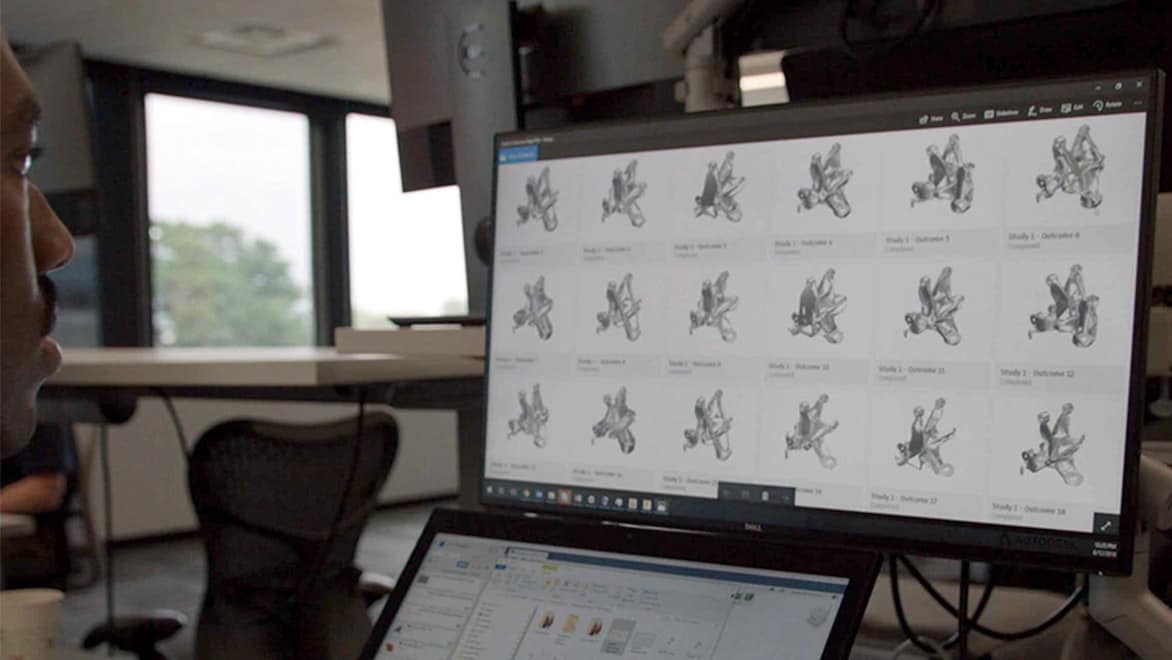 “Generative design paired with additive manufacturing can be completely disruptive to our industry,” says Quinn, who adds that the auto industry historically has been impeded by the limitations of traditional manufacturing tools such as mills and injection molds. For one, such tools can fabricate only very simple geometries.

Also, traditional tools are as expensive as they are inflexible, which makes experimentation cost prohibitive. Generative design and additive manufacturing can support infinite design solutions with minimal capital investment. A single piece of software paired with a single 3D printer can produce myriad parts and unlimited forms—including organic shapes and internal lattices, which can only be executed using additive manufacturing.

To understand the business case for generative design, consider the challenges posed by electric vehicles (EVs). Although automakers are extremely bullish on them—GM alone plans to have at least 20 electric or fuel-cell vehicles on the market by 2023—such vehicles are more expensive to produce. For GM, generative design might help solve those challenges by facilitating lighter vehicles and a shorter supply chain.

“Electrification and autonomous vehicles are going to be game changers for our industry,” Quinn says. “Having a leadership position in those highly technical areas is critical going forward. We believe additive manufacturing and generative design can help us gain that first-to-market advantage.”

In a recent collaboration with Autodesk using the generative-design technology in Fusion 360, GM engineers designed a new, functionally optimized seat bracket, a standard auto part that secures seat-belt fasteners to seats and seats to floors. While the typical seat bracket is a boxy part consisting of eight pieces welded together, the software came up with more than 150 alternative designs that look more like a metallic object from outer space. Made of one stainless-steel piece instead of eight, the design GM chose is 40 percent lighter and 20 percent stronger than its previous seat bracket. 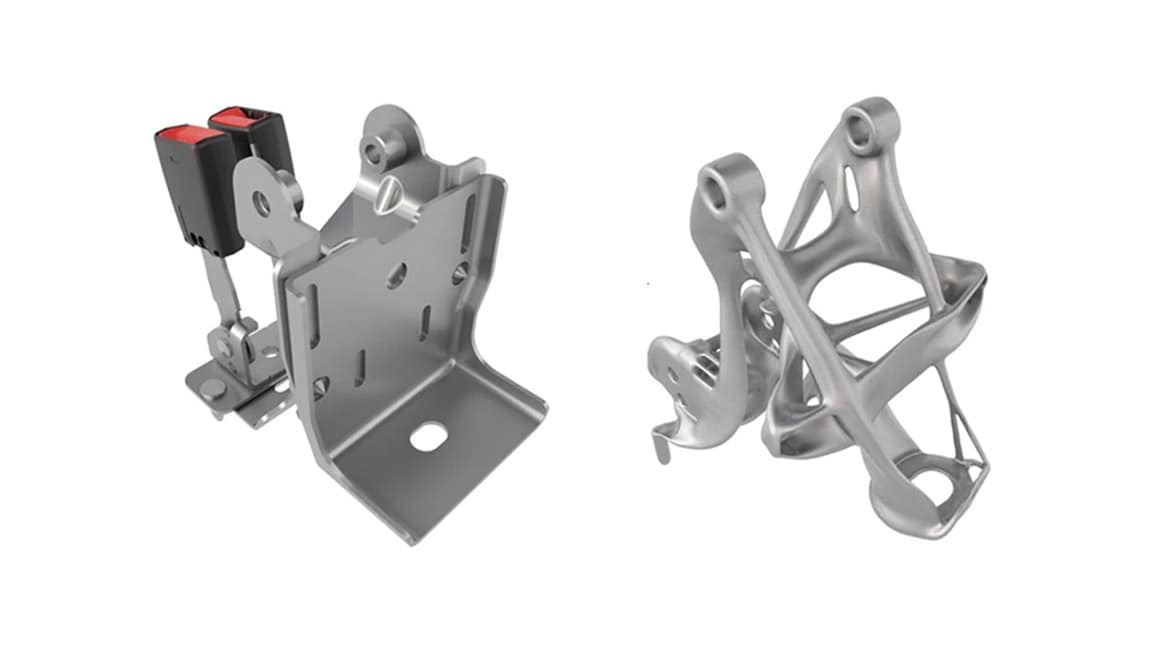 Using generative design and additive manufacturing, GM was able to consolidate the eight different components of a small but important part—a seat bracket, where seat belts are fastened—into one 3D-printed part.

“The motivation to consolidate eight parts into one is twofold,” Quinn says. “One, we can optimize for mass. But another ancillary benefit is that you’re reducing all the supply-chain costs associated with having many different parts that may be made by many different suppliers, which then have to all be joined together.”

Applied across hundreds or even thousands of parts, it’s easy to see how such improvements could make vehicles cheaper, lighter, and more fuel efficient.

“The challenge for us now will be to find those other unique applications where generative design and additive manufacturing make sense,” Quinn says. GM already is working to optimize many other parts on its vehicles.

“If we can use generative design and additive manufacturing to give another mile per gallon of fuel economy or to extend by 10 miles the range of our electric vehicles, that can be a huge competitive advantage for General Motors going forward,” he says.

Increased performance is only the beginning. In the future, GM envisions using additive manufacturing to affordably and efficiently make service parts at dealerships and to customize its vehicles.

“Right now, to customize something on a vehicle requires a huge capital outlay for GM because you’ve got to build a new tool every time you want to make something custom,” Quinn says. “Since there’s no return on investment, often in our industry, we make the decision that we just won’t do those things.”

Quinn adds that additive manufacturing could allow customers to order custom trim packages or personalize their vehicles with their names or the logos of their favorite sports teams. “If we can offer something that our competitors don’t, that will set our vehicles apart,” he says. 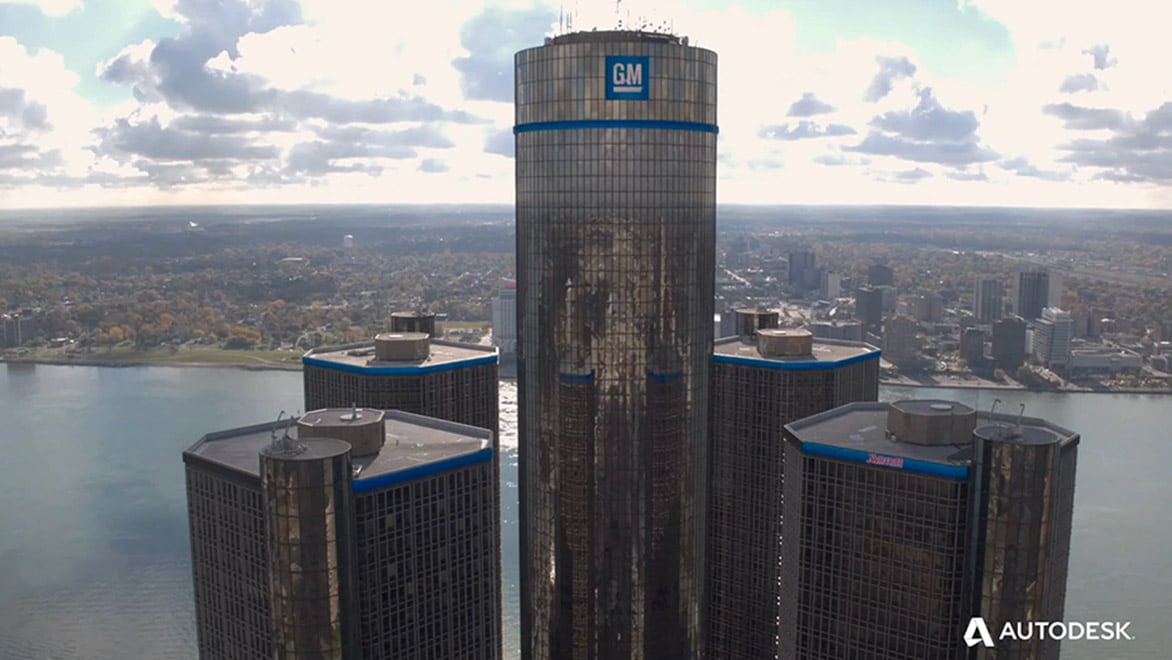 See how GM and Autodesk engineers apply generative-design technology to reconceive the seat bracket of a car (2:05 min.).

At its best, that’s what technology is all about, according to Quinn: It’s not about building buzz; it’s about delivering benefits. “Generative design and additive manufacturing really excite me because they’re going to allow us to deliver performance to our customers that they couldn’t get any other way.”

A version of this article ran previously on Redshift. Photos courtesy General Motors.